Paleo gardening, in the form of building raised vegetable beds, is good for the soul.  I’ve always enjoyed working with my hands – I find it very relaxing, and satisfying, too.  In fact, I’ve become fairly adept at handiwork for small household projects and hobbies, but when it comes to larger jobs that involve carpentry and serious power tools, I’ve always been hesitant.  Part of that stems from a lack of experience; I’m not clueless when it comes to tools, but at my core I’m a suburban guy who’s used to calling the “experts” (carpenter, plumber, repairman, etc) when there’s a problem that needs fixin’ or a project that needs gettin’ done.

All of that all changed a few years ago when my garage door fell apart.  True to form, I picked-up the phone and called a carpenter who came by the next day and promptly gave me a $9,000 estimate to do the job! I decided on the spot that I would do it myself.  “Seriously,” I thought, “How hard can it be?”  Well, as it turned out, not that hard at all.  Armed with nothing more than a pencil, a pad of paper, a tape measure, and my knowledge of 5th grade math, I drew-up a plan.  Then I bought the wood and the hardware, and with the help of a good friend on a sunny Saturday afternoon, built the whole thing for less than $200.  Sure, it was only a simple barn-style door, but I was proud of the results, and six years later, that door still stands as solid as the day it was made.

However, the most important message I gained from that day was confidence.  No doubt, I was still mostly a typical suburban guy on many levels, but still I felt as if I’d breached some heretofore-mystical divide.  For the first time in my life, I was “handy”!  Not only that but I liked it too.  The entire process, from the planning stages through the buying of the parts and especially the assembly was highly enjoyable. So when my wife asked me to build her a series of raised gardening beds in our backyard, I eagerly dove into the project.

As with the garage door, the first task was to draw-up a blue print.  After finding a simple and sturdy design on the internet, I measured out the dimensions of the yard, and decided on the sizes and quantities of wooden planks I would need to build three 10’ x 4’ x1’ raised planter boxes.  We decided on cedar because of its durability. (Note: When building raised planters, NEVER use treated wood, as it contains chemicals that will leach into the soil and contaminate your food).  We purchased it from a local lumberyard for about $500.

Once delivered, I set about separating the planks according to their size, and moving it all to the backyard.  Then I assembled my tools and got to work. 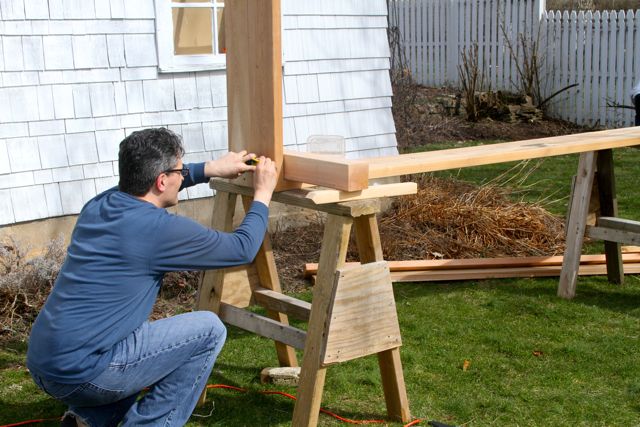 First, I lined-up all of the like-sized planks to make sure that they were properly cut-to-size by the lumberyard.  Good thing I did, because they weren’t.  With the help of my neighbor’s mitre-saw, I cut them correctly to size.

Since I’m occasionally impatient and somewhat Impulsive, I then began to immediately assemble the basic frame, and this was a mistake. What I should have done first was to measure-out and counter-sink ALL of the intended screw-holes, instead of doing it hole-by-hole as I lined-up the planks and moved them into place.  My chosen method was not only more labor intensive (I had to keep the planks balanced and in position as I screwed the holes), but it was also fairly tedious since I was constantly swapping-out the counter-sinking bit for the screw-driver bit on my drill.  Regardless, I managed to get the basic frame assembled on my trusty old sawhorses, and within two hours, I had managed to complete one of the raised panting beds.

After applying my learnings from assembling the first bed, the remaining two were easier and quicker to put together.  Pre-drilling all the holes with the counter-sinking bit really sped-up the process.  I finished beds 2 and 3 in the same amount of time it took me to assemble the first one. 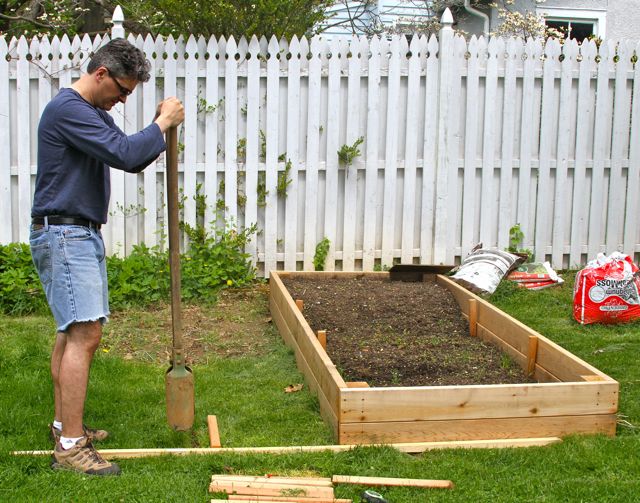 Once I had completed the assembly stage, the next step was to literally “plant” the beds into the ground.  Once again, I mistakenly chose a method that was accurate but time-consuming.  I carefully measured the distance between the centers of 4”x 4” corner posts, and then measured out the approximate distances on the ground with my tape measure and right-angle.  Then I dug-out each spot with a post-hole digger (and let me tell you, this was a real workout for my shoulder and pectoral muscles).  Unfortunately, my holes were not as accurate as I would have liked.  When I attempted to lower one of the beds into the holes, I realized that I was off by a few inches, and had to readjust by digging a bigger, wider hole.  Vowing not to repeat this mistake again, for the next two beds, I put them into place and marked-off the holes with bright yellow spray paint that I sprayed around the posts.  This worked very well, and when I lowered the beds, they slipped perfectly into place. 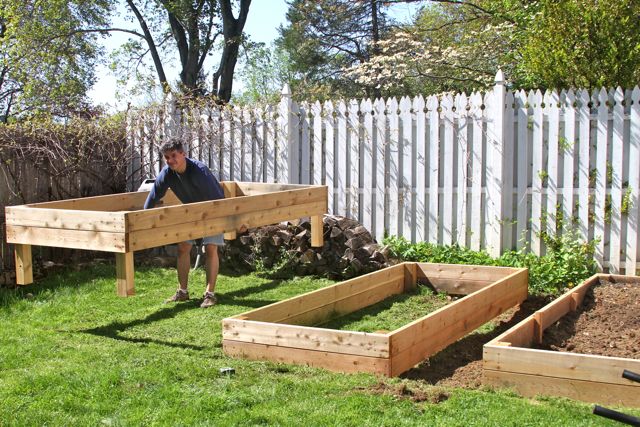 Of course, an experienced carpenter or handy man would have never made a the minor errors I made in the assembly process, but then I wouldn’t have learned anything in the process, so I consider it to be good value for the effort, and I’m more than pleased with the results (and so is my wife – even better!)

You might be asking yourself “What makes this ‘Paleo’?”  Well, actually, a lot of things, in my humble opinion.

First, there’s the aforementioned idea of working with one’s own hands that really appeals to me, personally.  You can’t get much more of a back-to-basics feel than by doing something yourself. There’s also the joy of working with wood, one of God’s most versatile creations.  What hasn’t mankind been able to achieve without wood?  For thousands of years we’ve made tools with it, we’ve hunted with it, heated our homes, and built them, too. Wood is a fundamental construct of nature that has played an essential role in the development of civilization (and it smells good, too, especially cedar!).  Then there’s a healthy, physical component that can’t be overlooked.  Why don’t you often see images of paleolithic man in jogging shoes? Because he was too busy working!  To me, the best kind of exercise is the kind that doesn’t seem like exercise.  There’s also the satisfaction of working close to the soil, and creating something that will be used to grow natural, organic food that replenishes our bodies.  And finally, there’s the creative stimulation of the learning process that helps us to grow intellectually and intuitively.

I Have Made Cauliflower! Basic Cauliflower Rice Recipe
Bard's...Not all Gluten-Free Beer is Created Equal
Paleo and The City: Greensquare Tavern
Tagged with → gardening • raised beds