I’ve said it before, and I’ll say it again: I love beer.

My wife, too, enjoys a high quality beer now and then. But her gluten intolerance made me feel…well, guilty if I was sitting across from her at the dinner table, sipping a cold, tasty bottle of beer while she downed another glass of ice water.

So when she discovered gluten-free beer, I was all for giving them a try. Oh sure, I was skeptical at first. When it comes to beer I’ve always been kind of a purist. To me, mainstream brands that advertise during the Super-Bowl are the equivalent of pork-rinds to a vegan – I just won’t touch the stuff. So I wasn’t sure how I’d react to a beer that wasn’t brewed the traditional way with traditional ingredients like barley or wheat.

Well, I tried them — and for the most part, I liked them! Gluten-free beer (GFB) does take some getting-used to. The difference is usually apparent from the first sip, as the taste of gluten-free beer tends to be sweeter due to high sugar content. That’s because gluten-free beer is often brewed with sorghum, a type of grass that is used, among other things, to feed livestock. Certain species known as “sweet sorghum” have been grown in the southeastern U.S. since the mid-nineteenth century. In some parts of the US, sorghum syrup is even used on pancakes. 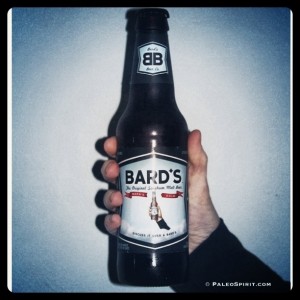 Now, I’ve never tasted sorghum syrup, but I’m told that it tastes similar to molasses. If so, that would explain the taste of BARD’S Sorghum Malt Beer. The molasses taste hits you hard with the first sip, and is not complemented by any noticeable flavor of hops. This has the unfortunate effect of not dampening the sweetness, which lingers and then grows stronger after you swallow before becoming sour. Also unfortunate is the lack of carbonation in BARD’S. Although the pour resulted in a respectable frothy head, the taste was somewhat flat like a real English ale. Lea thought the taste started out well when the beer was really cold but went downhill quickly as it warmed up slightly.  Overall, I was put-off by BARD’S highly sweet flavor and lack of carbonation. In my opinion, as a gluten-free beer, BARD’S is drinkable…but only if you can’t find a gluten-free alternative and you REALLY want a beer.

Interesting tidbit: BARD’S was created and marketed by two guys who both have Celiac disease, and is brewed with only natural, pure ingredients like sorghum, yeast, hops and water. So while the taste of BARD’S did not appeal to me, I can appreciate their efforts to address the need for gluten-free beer and to do it with all natural ingredients.