Maybe We Should All Be More Like Boy George

Boy George and Culture Club have embarked on their U.S. summer tour called “Life”. My family and I will be attending the July 10th show in Austin, TX just as we did two years ago and as I have at least three times before that, going back to the early 80’s. When posting about this on Facebook recently, I received a message from a friend seemingly surprised, yet pleased, that a Christian conservative would be such a fan of Boy George. I was initially shocked by the comment because I do not see anything contradictory in those two things. The message started me thinking about the state of human relations and civil discourse in this day and age. But first, a little background. 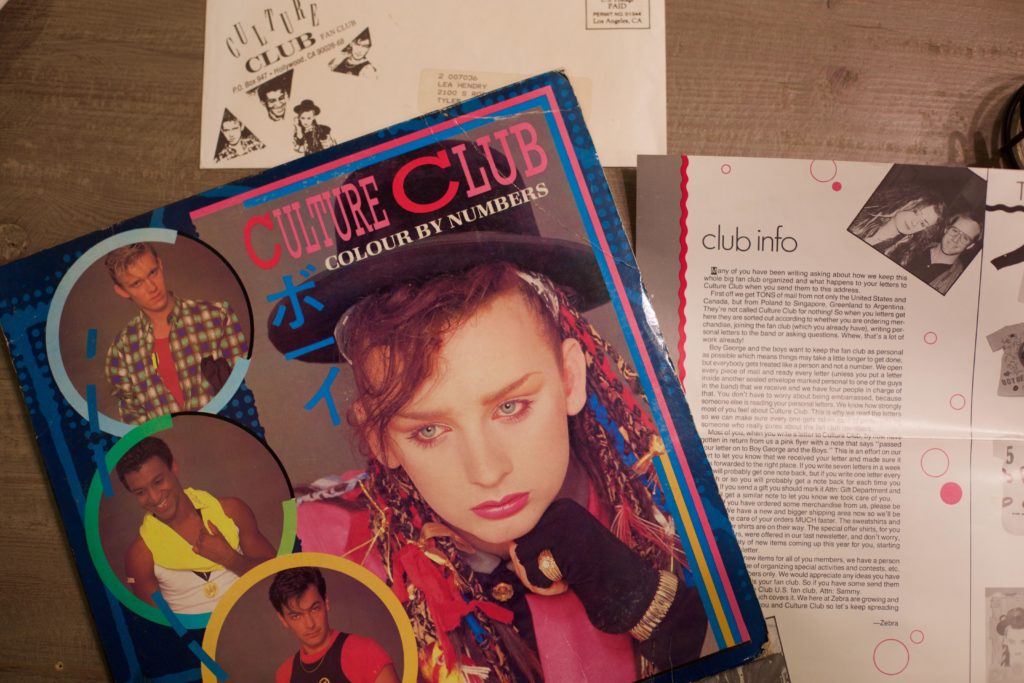 As the story goes, the band’s name, Culture Club, is a reference to the various ethnic backgrounds of the members – George has Irish heritage, Mikey Craig has Jamaican roots, Jon Moss is Jewish and Roy Hay is English. My own attraction to the band goes back to close to their start in the early 80’s. I fell in love with Boy George’s sultry vocals and Culture Club’s unique, polished, complex, reggae-inspired and catchy tunes. My mother recently sent me my collection of news clippings and Culture Club Fan Club mailings I have saved since at least 1984 (34 years?! Wow). (In reviewing everything I started to feel uncomfortable that it may seem creepy I collected this stuff and then I remembered I was around 13-14 years old at the time. Then again, I’m still more or less a fan girl.) 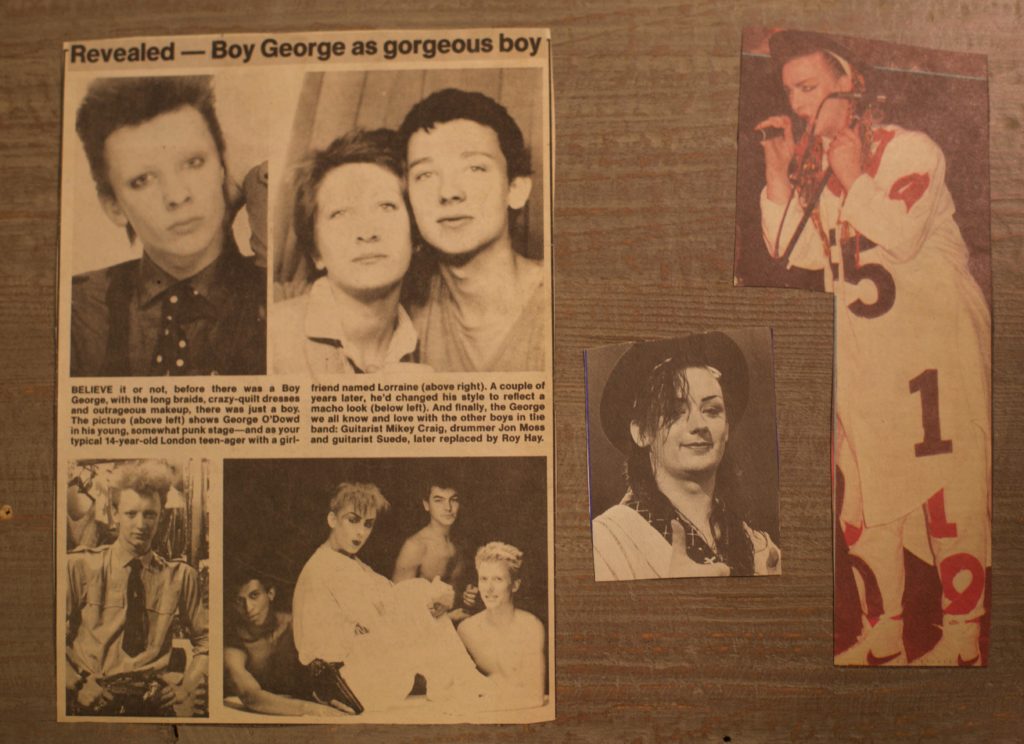 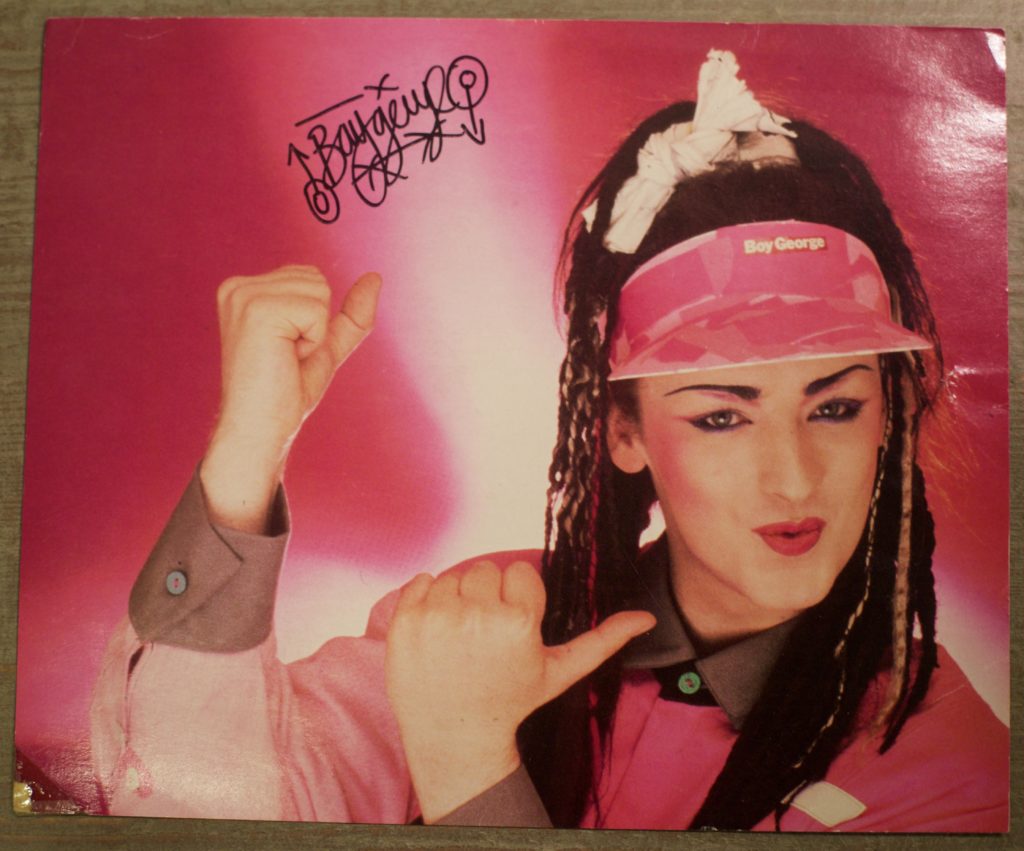 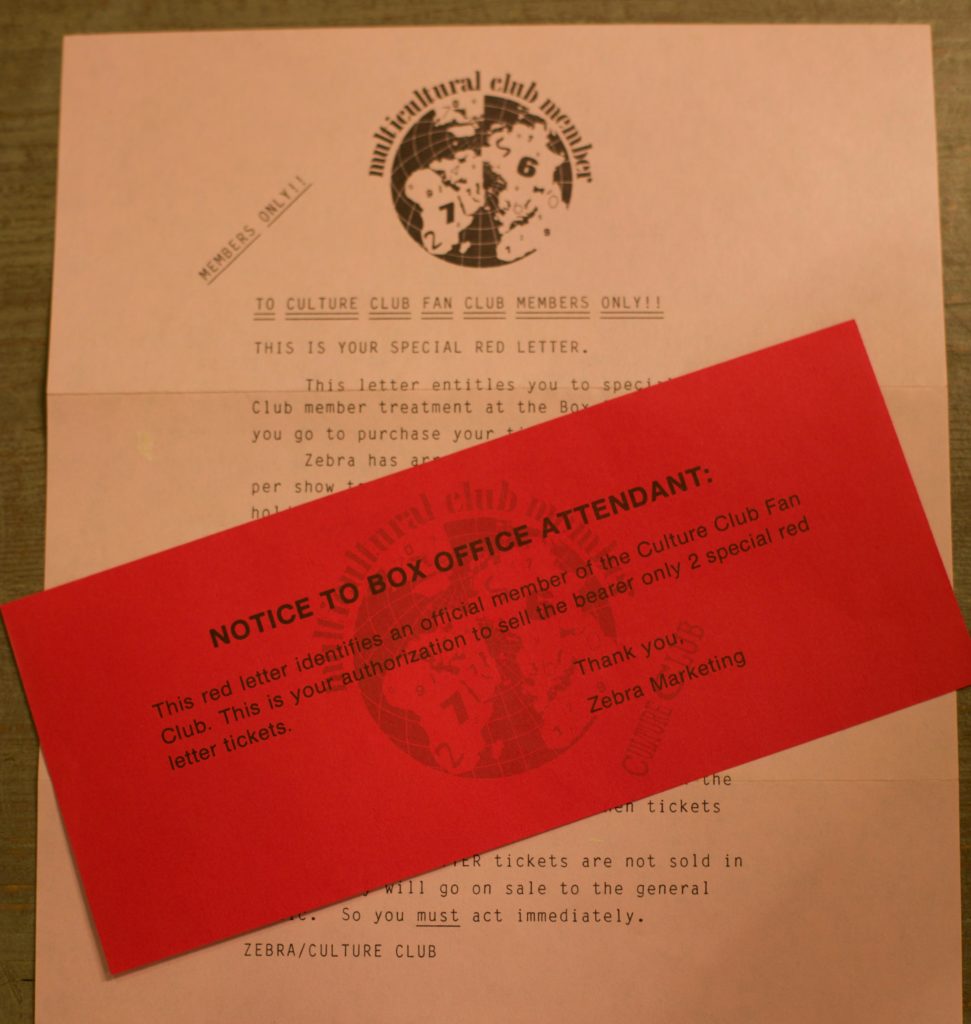 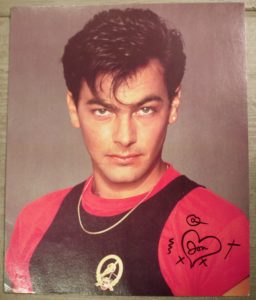 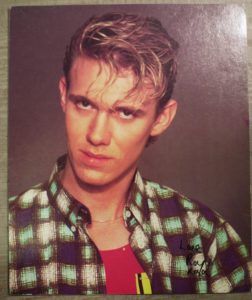 I distinctly remember coming home with their album “Kissing to be Clever” and my strict, religious (and doting) father took one look at the album and demanded to read through all the song lyrics. After reading through every single lyric, he returned a short while later, album in hand, and gave it back with his blessing. He never seemed to take issue with George’s appearance and was merely protective in terms of offensive lyrics, which he would do about any music I was listening to at the time (age 13). It wasn’t long before he was buying tickets for me (and himself and my mother!) for the Culture Club concert at Reunion Arena in Dallas, TX. I dressed up as Boy George for a school project music video and became forever associated with him by my classmates. 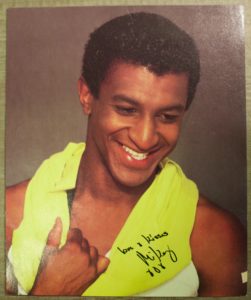 Over the years, my initial attraction to Boy George has grown into a more abiding respect and appreciation for him as an individual. While never really leaving the creative scene, George has come through some challenging times stronger than ever. While retaining his sharp wit and sometimes biting humor, George manages to exemplify a level of empathy, compassion and respect for others from which we could all learn. Perhaps my favorite thing about George is his positivity and willingness to express his opinions whether or not they align with what is popular or what is stereotypical. That’s called being a free thinker, is it not?

Case in point, in a recent article about the tour in the Tampa Bay Times, George was asked about the term LGBTQ. Here’s his answer:

“I suppose I use that term because everybody else does, but I don’t really need that term. I’ve always been open and connected to everyone and everything different — and everything normal. I’m not one of these gay men that ostracizes straight people. To me, my sexuality takes up about four hours a month. It’s not the most important thing about my life. I’ve always felt like Culture Club was a one-stop shop for anyone who felt different for any reason. On a day-to-day basis, I just think people are people, and there are two types of people, nice people and not-so-nice people. It doesn’t matter really where they’re from, or what their sexuality is.” 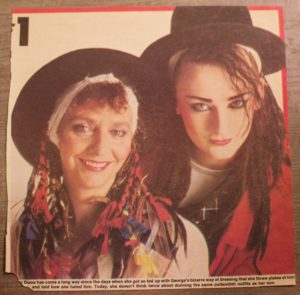 Boy George and his mom (from my personal ‘fan girl’ clippings)

I get choked up reading that owing most likely to the sad state of affairs we find ourselves in, not just in America but seemingly the world over. The divisions among us, the tribalism and identity politics and general prejudging of other people (of ALL kinds), are very sad and discouraging. There’s so much anger and hatred flourishing right now it’s hard not to be depressed by it all. And while my friend was attempting to compliment me on the fact that I, as a Christian, could admire a person like Boy George, in reality it is very telling about our times. Why would he assume those two things are incompatible? In fact, why would I NOT admire him? It doesn’t mean I think he’s a perfect person, none of us are. And it doesn’t mean we necessarily agree on everything. But there should be absolutely NO REASON why individuals cannot love and appreciate each other for our similarities as well as our differences while not comprising our own values! And we should be able to discuss ideas and opinions while still appreciating the fact we are all made in God’s image, treating everyone with respect and dignity. 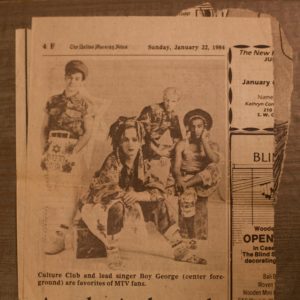 So, here’s to you Boy George. Thank you for being the unique individual you are, for showing resilience and strength, for your positivity while always showing a willingness to speak out when you think there is injustice. For your quick wit in putting haters in their place no matter what side they are on. Thank you for never losing the ability to think critically about matters and keep an open mind. Thank you for the time you take to interact with fans, including Twitter HBD’s which may seem like a little thing but yet shows a general care for your fans which I am quite certain is very meaningful to them and something very few celebrities take the time to do.

And on a personal note, thank you for accepting the gift of my cookbook and then actually taking the time to personally thank me, make a recipe and let me know how it turned out! (Your mother clearly raised you with manners!) 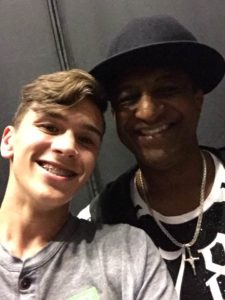 Thank you for chatting with me and my sons, Ben and Nathaniel, when you were in town two summers ago and letting them take selfies with you and the band. My older son, Ben, who was 15 at the time, and prone to not liking anyone or anything that year, came away from meeting you telling me how cool he thought you were. He has since taken up the bass guitar with ‘Miss Me Blind’ in his repertoire – inspired by Mikey Craig. My younger son, Nathaniel was your biggest fan during your time on Celebrity Apprentice, watching every episode and rooting you on. 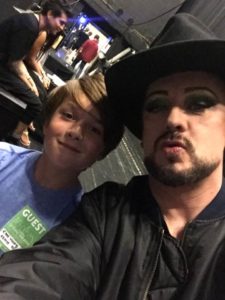 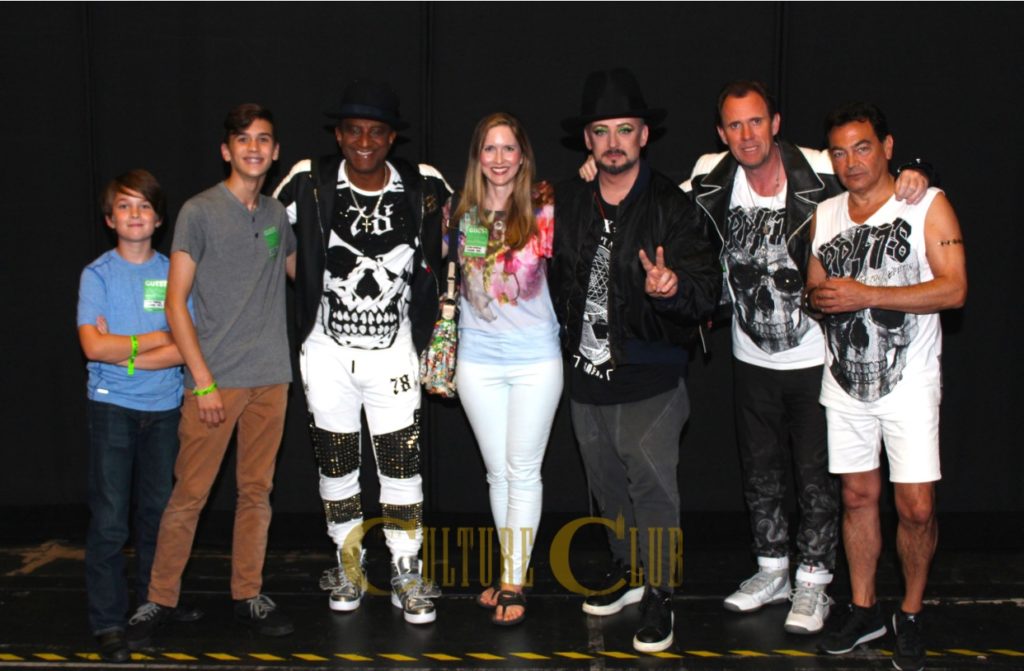 Yes, Boy George and I may be very different indeed. But differences like ours should never be an excuse for incivility and hatred. Maybe there really are two types of people “nice and not-so-nice”. I hope and pray more of us will make a conscious effort to be the former.

For more information about the Boy George and Culture Club 2018 Tour check here!

UPDATE: Concert was great and I even managed to convince my younger son, Nathaniel, to get into the spirit. 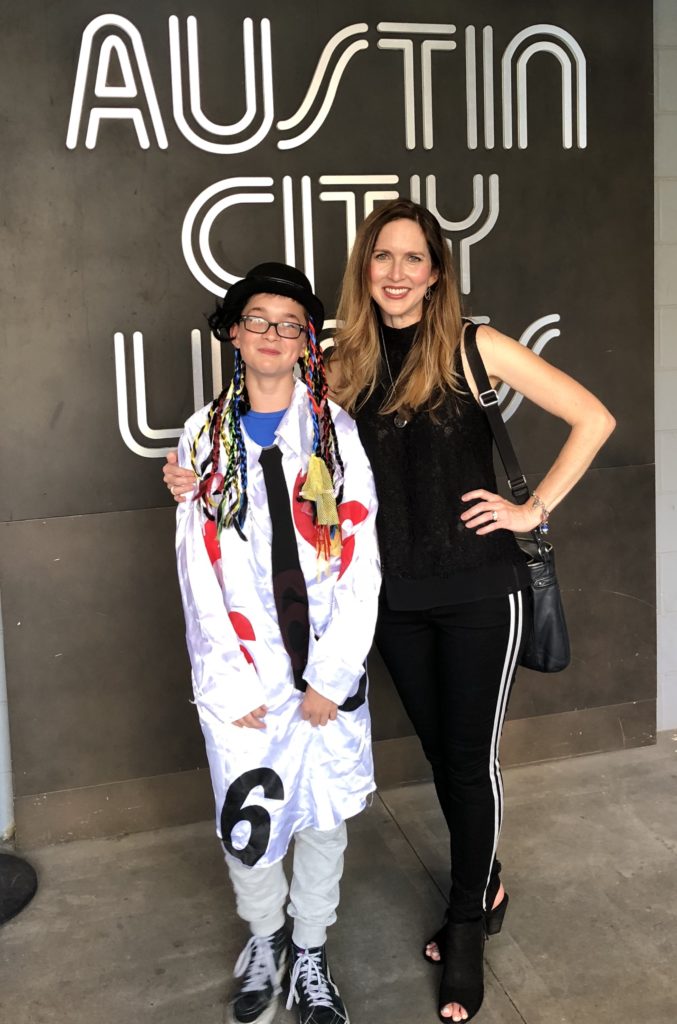