It was a cold autumn evening and I was on my way to a Christmas concert in a nearby town when I spied a brand-spanking-new Penzey’s store. Had it not been for a slew of paleo food blogs I have seen referencing Penzey’s, the significance might have been utterly lost on me. But I knew immediately I would be making the trek back the following day to check it out up close and personal. In fact, I even managed to convince G to come along which meant we dragged our two boys as well.

Penzey’s is the top on-line seller of over 250 herbs, spices and seasoning blends from around the world. They have also branched out with several retail stores. Ordinarily when I see a recipe that contains a spice mix ingredient I just move on to something else. It has always seemed a bit presumptuous on the part of the person creating the recipe that we readers would necessarily have that particular spice mix on hand. Not only that, but while my kitchen cabinets are filled with a fairly respectable assortment of herbs and spices, I have never been big on spice mixes. So many of them have salt or sugar or MSG or the confounding “natural flavors” or all of the above that I was simply not interested. But after seeing Penzey’s referenced so many times I figured it would be worthwhile to investigate and I’m glad I did.

While ordering spices online is a perfectly reasonable thing to do – especially if you do not have access to a Penzey’s retail store – there is just something wonderful and sensual about being able to see and smell the offerings before making a selection. The Penzey’s store we visited was warm and inviting with a peaceful ambience and a friendly staff. The spices were well organized and most, if not all, of them were available to smell. There was even a small area for children to sit where they could draw pictures to be displayed on the store walls. While the boys were safely ensconced in the art area, G and I proceeded to sniff almost every herb, spice and mix in the store. A few more than once.

Here is what we brought home with us. 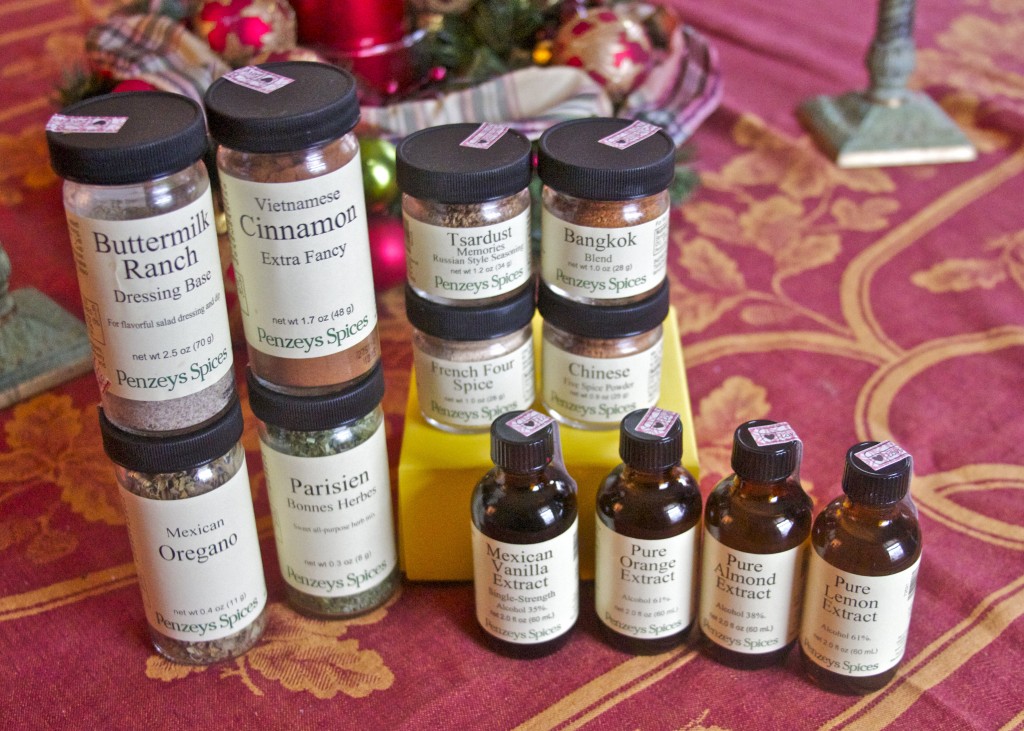 The cinnamon selection alone was worth the trip. I was blown away by how different the cinnamons smelled. The prices varied depending on how exotic the spice. The strength of the spices like cinnamon depends upon the essential oil content— the higher the level, the stronger the flavor. G ended up buying me a few things in secret that he would later present as Christmas gifts. One of them was the Vietnamese Cinnamon which is the highest quality, strongest cinnamon available in America today. He got a big kiss for that one. 🙂 I use the Vietnamese Cinnamon when making Coconut Flour Paleo Pancakes.

Some other things we purchased: 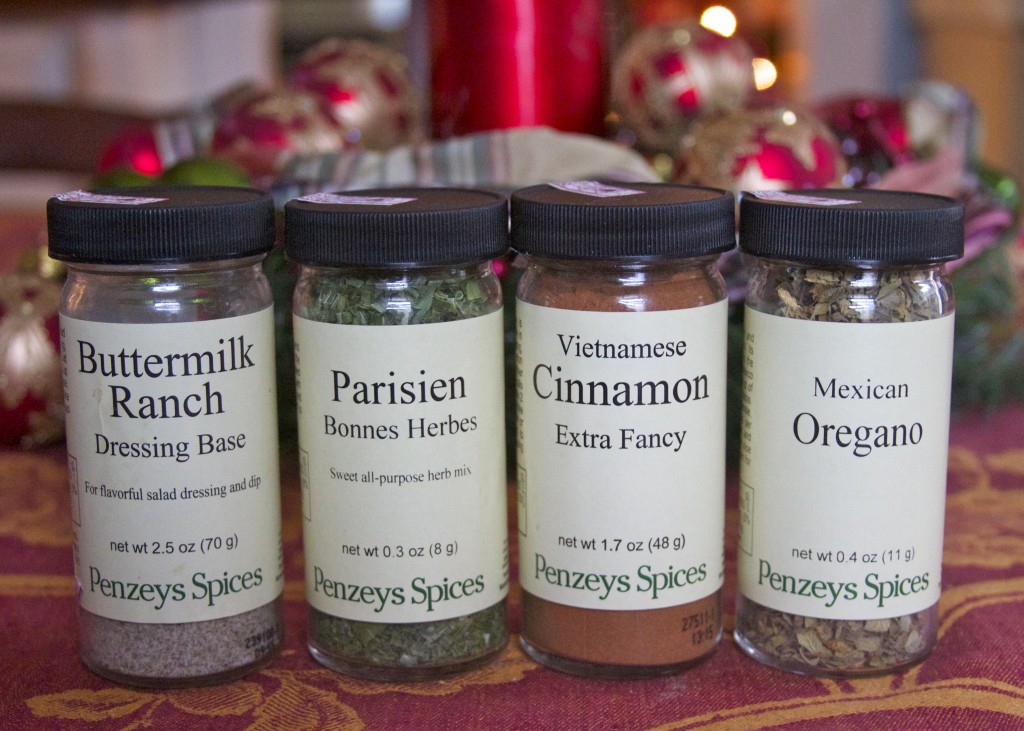 The Mexican Oregano is very pungent and less sweet than other oreganos and goes well with spicy, Mexican and Latin American inspired dishes like Barbacoa Beef. The Parisien Bonnes Herbes is made up of chives, dill weed, basil, French tarragon, chervil and white pepper. I plan on using this in scrambled eggs and frittatas and the like. The Buttermilk Ranch Dressing Base caught my eye and I snapped it up immediately because it does not contain any funky ingredients that are ordinarily found in this type of seasoning mix. It does have salt and some sugar but that makes for easy use when making ranch dressings and dips. (I’ll post a quick recipe for a dip using Greek yogurt soon.)

Among the extracts we sampled we selected four. 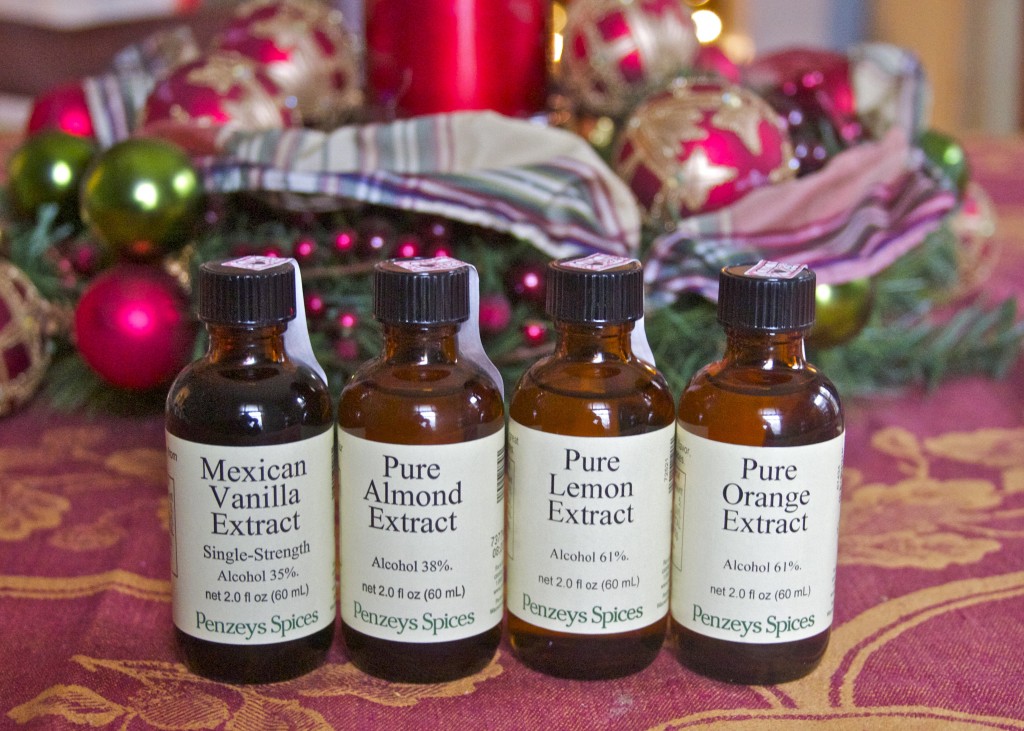 The Mexican Vanilla Extract is made from Mexican vanilla beans. Beyond that little tidbit of info I really have no idea why this is better or different than ordinary vanilla. But it sounds exotic with a promise of delightful results so I snagged it. The Almond Extract, in addition to going well in the baked goods that I no longer eat (for the most part) is supposedly great in Middle Eastern meat stews. I could definitely go for a Middle Eastern meat stew so it went in the basket as well. The Lemon and Orange Extracts will be great in fruit salads.

G picked out four of the smaller sized mixes for a custom gift box set. 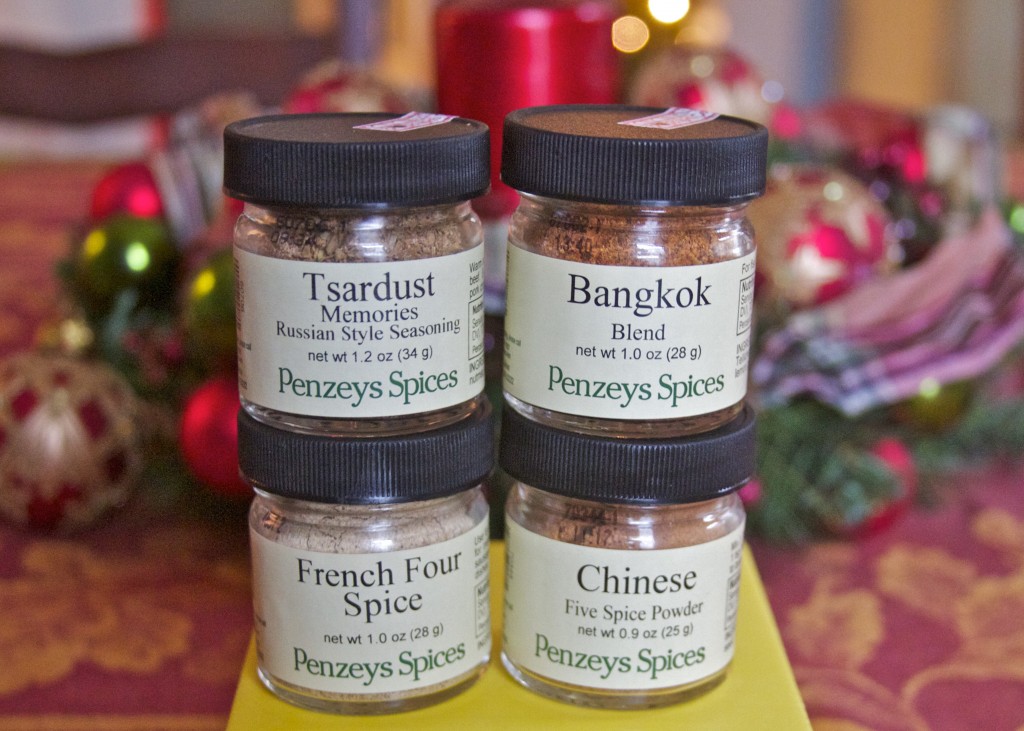 The Tsardust Memories contains salt, garlic, cinnamon, black pepper, nutmeg and marjoram. When I read that this one goes especially well with ground beef I knew I had to try it. I have used it to cooked a pork butt in the Turnip Hash Browns with Pulled Pork recipe and it was really delicious.

Bangkok Blend contains ancho chili pepper, garlic, ginger, Tellicherry black pepper, galangal, crushed red pepper, lemon grass, cayenne, paprika, basil and cilantro. It is supposed to be great for fish, chicken and vegetables. Thai is one of our favorite food genres so we didn’t think we could go wrong with this one.

I recently made Julia Child’s recipe for chicken liver paté and it called for French Four Spice. At the time I had to wing it with approximations of the ratios of white pepper, nutmeg, ginger and cloves. The jar contains the following advice, “Use for grilling or braising pork, beef and rabbit. Also good for making poultry stews with wine, meat pies and pork sausages. Add to white sauces, cream soups and egg dishes.” That’s one versatile spice blend!

The fourth mix is Chinese Five Spice Powder which I hear about all the time but have never tried. It contains China cassia cinnamon, star anise, anise seed, ginger and cloves.

We stayed in the Penzey’s store much longer than anticipated because we were having such a surprisingly good time. G has since remarked how much he enjoyed it. The boys allowed us to shop in peace and did not nag us to leave because they were content in the art area. Another benefit of going to the actual retail location was getting this coupon with our four-pack of spices. It’s just one more reason to return. 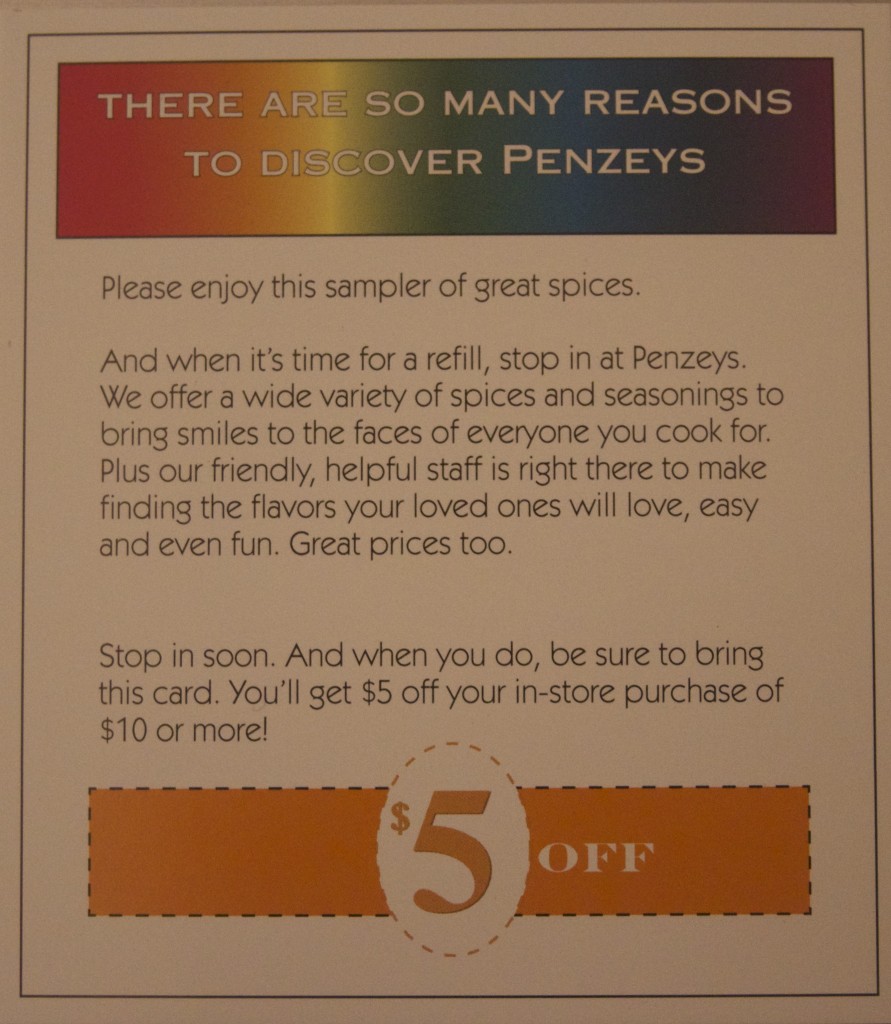 I look forward to testing out all these spices in future recipe adventures. In the meantime, here’s the link to the Penzey’s website where you can order your own. And if there is a store near you I suggest you make plans to visit. Just make sure you carve out enough time to enjoy it fully.

Have you ever visited a Penzey’s retail store? Ordered their products online? What did you think?

13 Responses to "Paleo at Penzey’s"