This past Saturday we took a little family jaunt down to Philadelphia for the Wizard World Comic Convention (Comic Con). One of my acquaintances congratulated me on being a “great mom” for taking my kids to Comic Con. 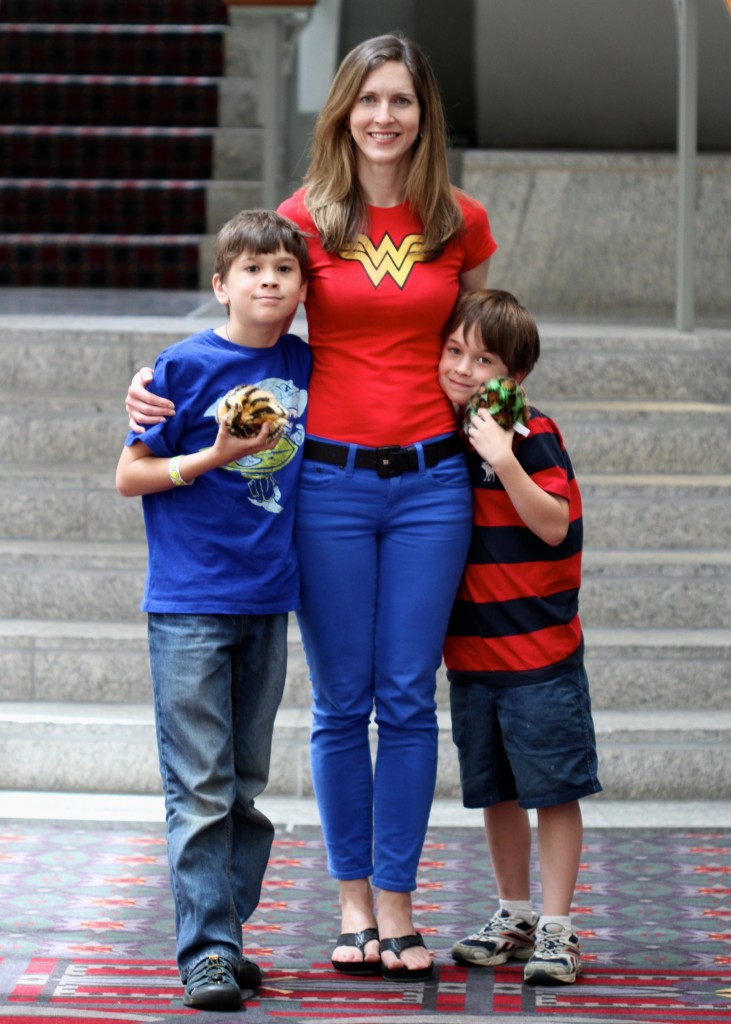 Wonder Woman wannabe and the boys with their new Tribbles. Remember those?!

As much as I would love to take responsibility and adopt that particular moniker, I have to admit this trip was instigated by my husband G – a major “fan boy”. (Sorry, G, that’s the official term for you guys) G has been collecting action figures and reading comics practically his entire life. He knows more about it than anyone I know and has a passion for the artwork and the stories. He’s even been known to write some of his own. We have attended several Comic Conventions in New York City over the years but this is the first time we attended the one in Philly.

There was not much about Comic Con that is relevant to the Paleo lifestyle – Well, except the fact there were so many attendees who would probably look and feel a whole lot better if they went Primal. But I simply cannot resist sharing some of the photos of the costumed people. Some of them went all out and we were truly impressed with the creativity and passion. Sure, there were some goofballs but even the outlandish people were entertaining. It was a lot of fun. I bought a Wonder Woman t-shirt and I might admit, if pressed, to buying some Wonder Woman knee-socks (with capes).

Truth be told, Comic Con is far more for adults than for kids. Just check out some of the costumed attendees! 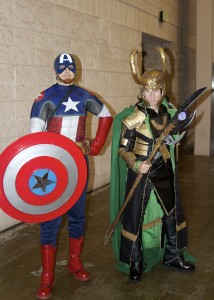 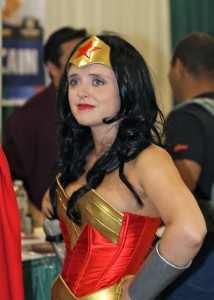 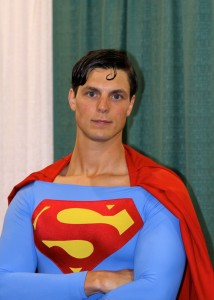 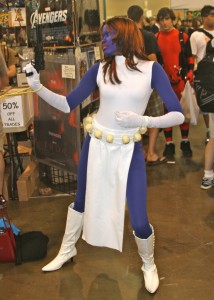 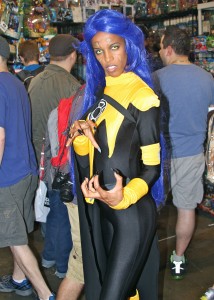 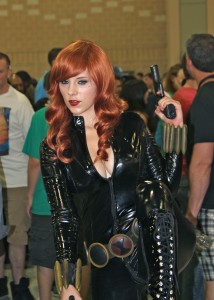 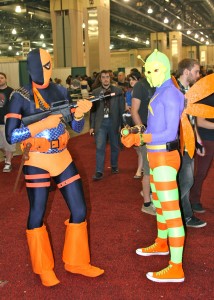 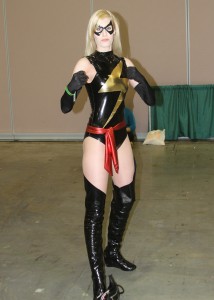 Nathaniel got into the act with Batman but I realized that my youngest, seemingly sweet child, may actually be an evil villain in disguise. He pulled a laser gun on Batman for crying out loud! Watch out for that boy. 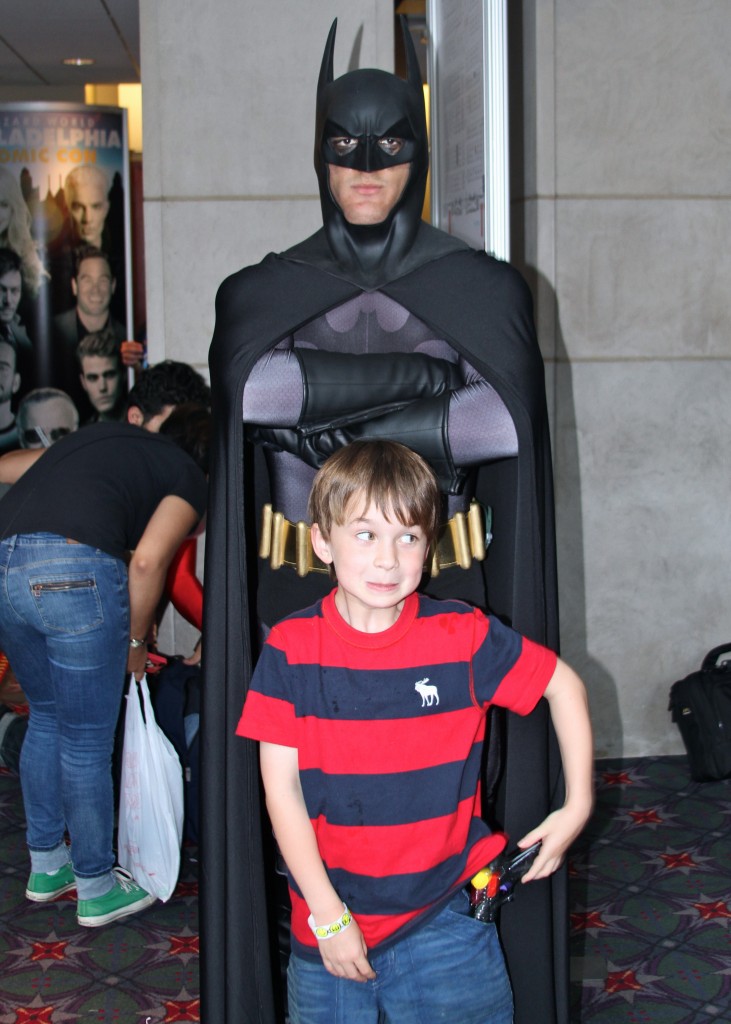 Nathaniel pulls a laser on Batman

There was a lot to see and buy at the Comic Con. I’ll spare you my grainy photos of some of the celebrities: Norman Reedus (Daryl from The Walking Dead), Chris Hemsworth (Thor), Dean Cain, William Shatner and Patrick Stewart to name a few.

We did not buy these. Did not even consider it….I swear. 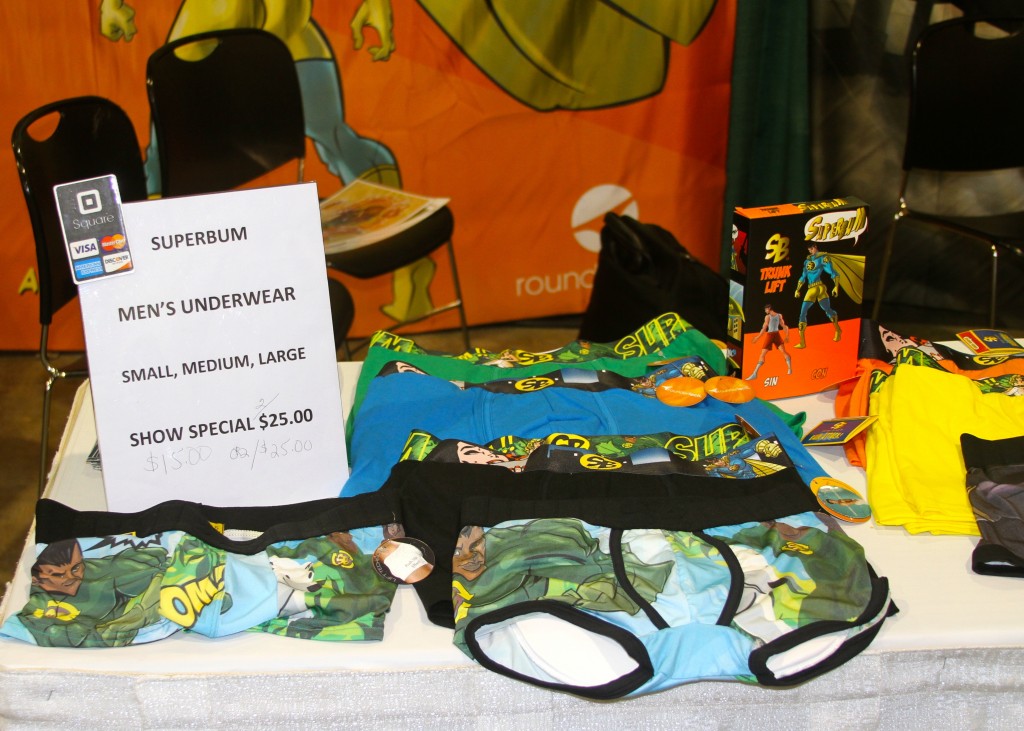 But I briefly considered this one. 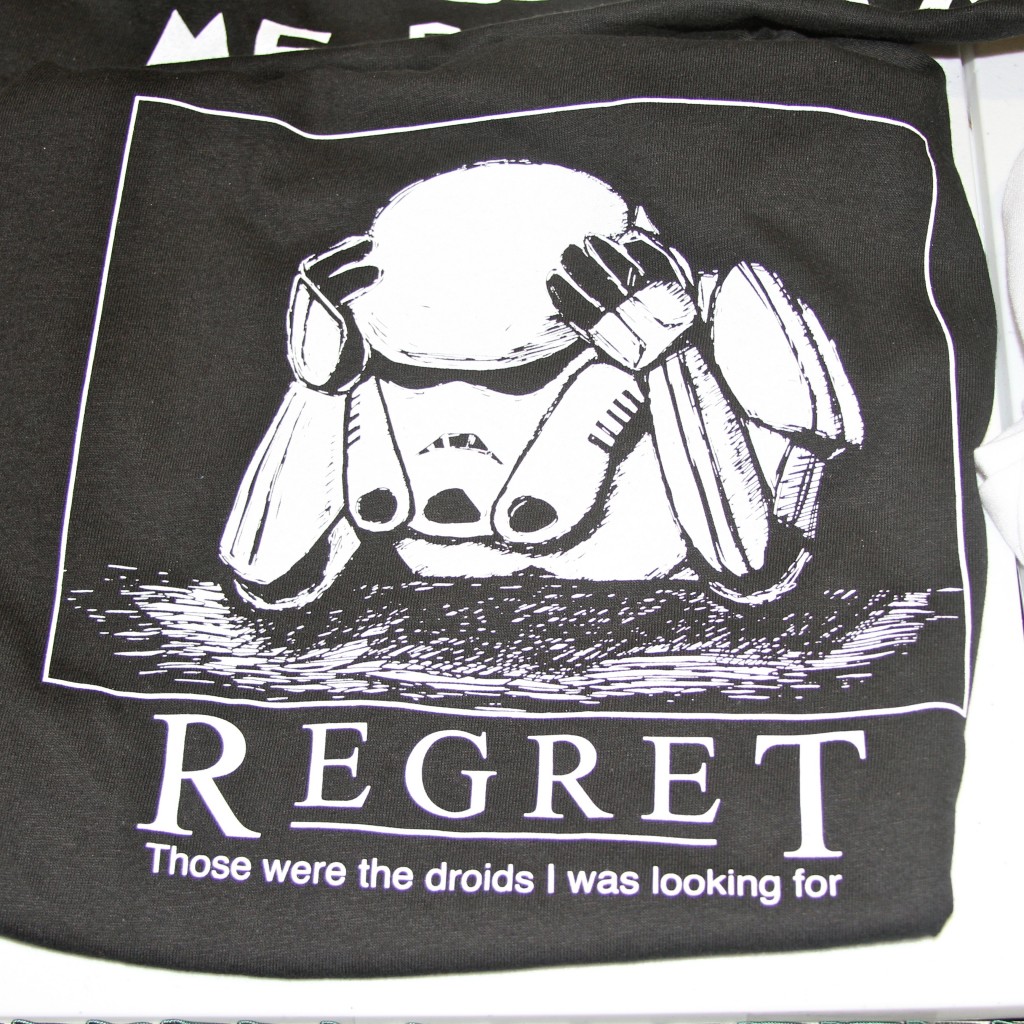 For lunch we went across the street from the Philadelphia Convention Center to the Reading Terminal Market. This market started out in 1892 below the tracks of the Reading Railroad train shed. It was considered the “greatest food market in the world” at that time. The Market was renovated and it now holds 80 independently-owned small businesses representing a great diversity of nationalities. They offer a variety of local and imported fresh foods, groceries and prepared meals.

We decided to get lunch from a place known as Dinic’s. 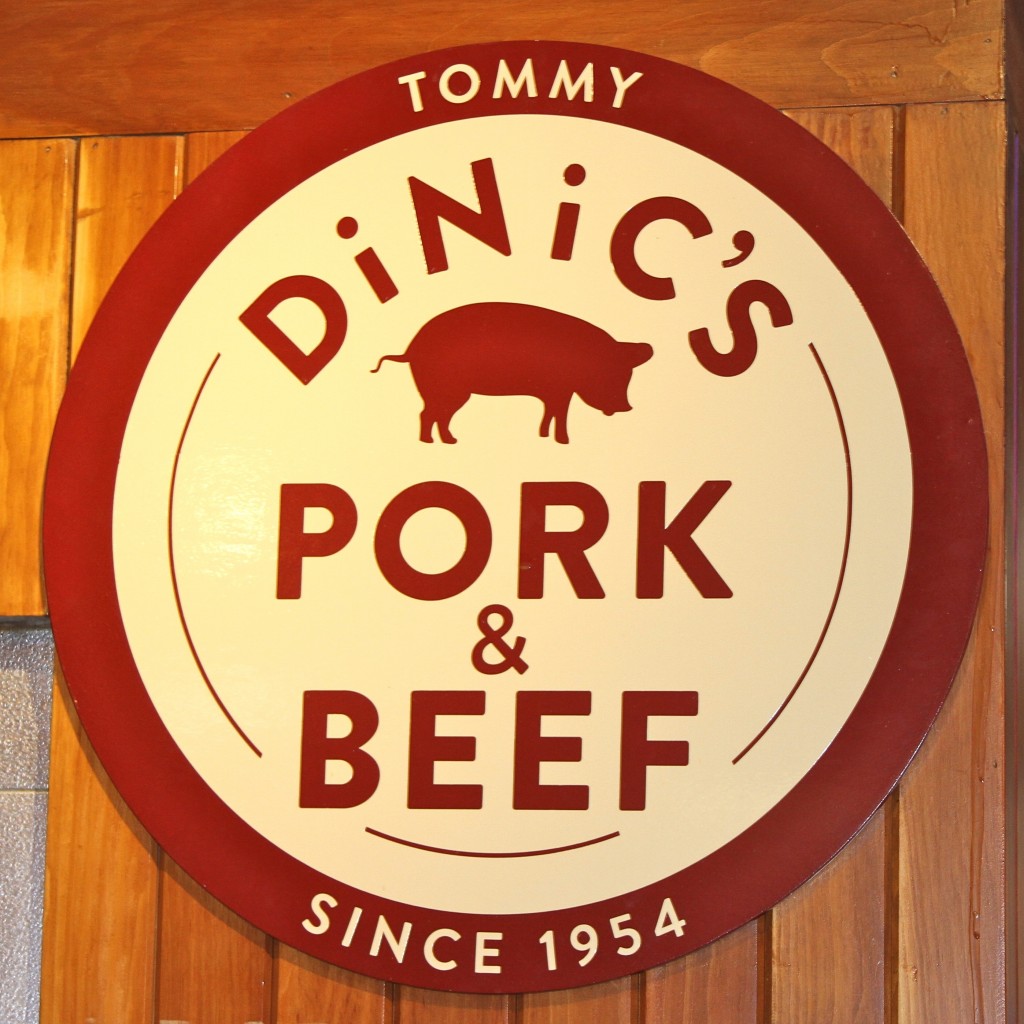 Dinic’s is known for its beef 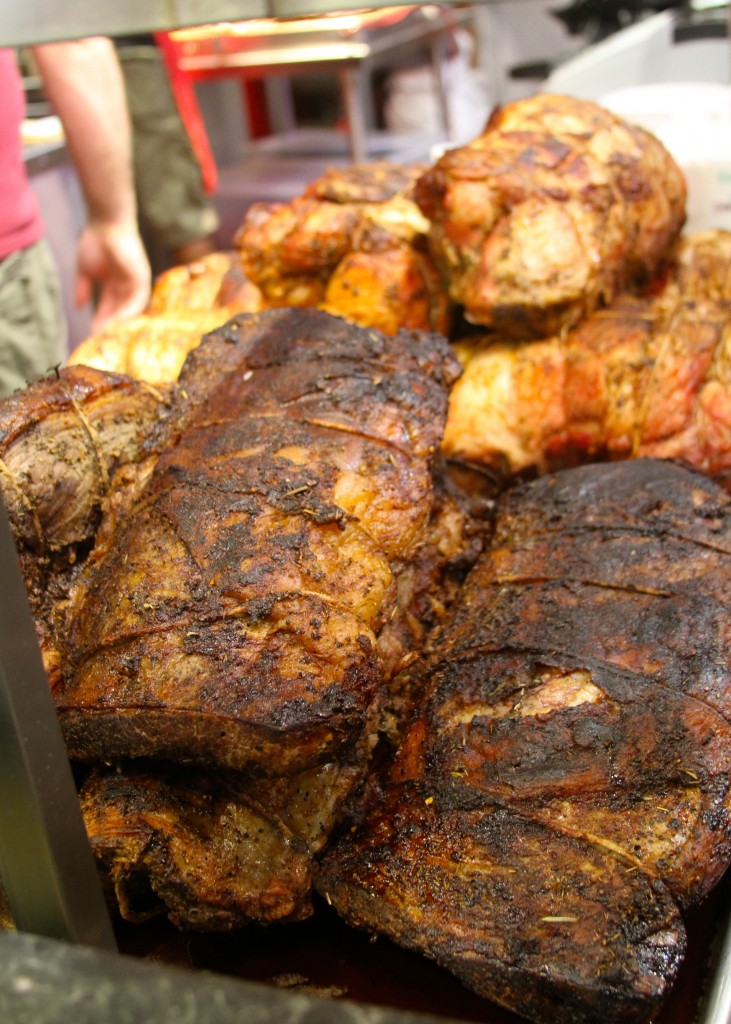 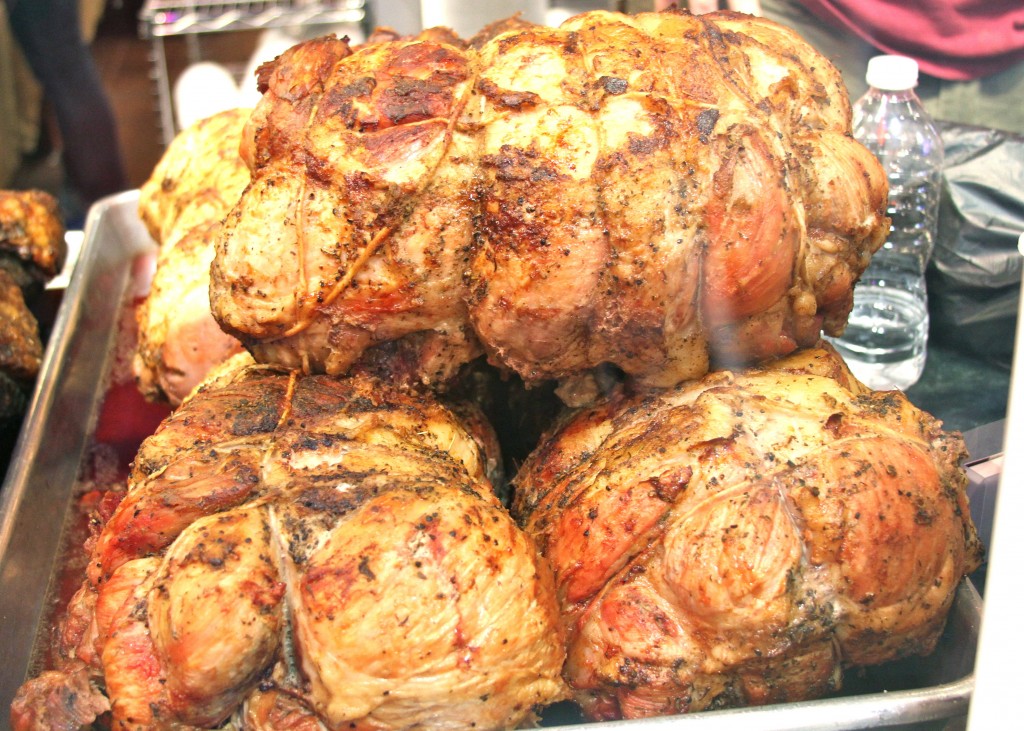 They know how to carve it up 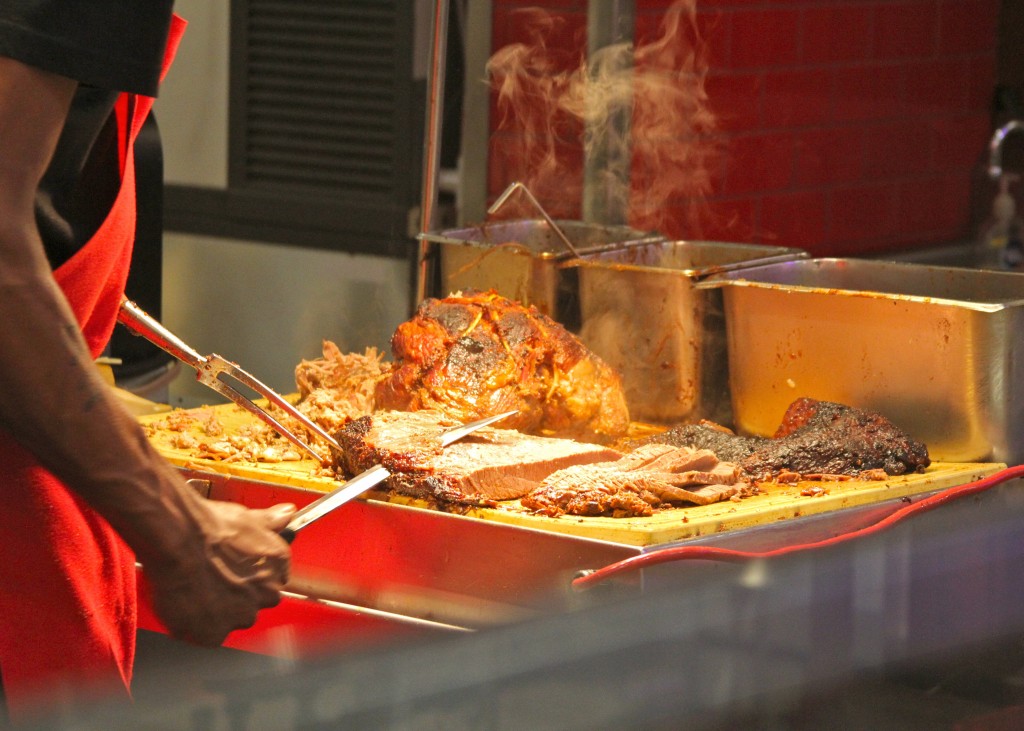 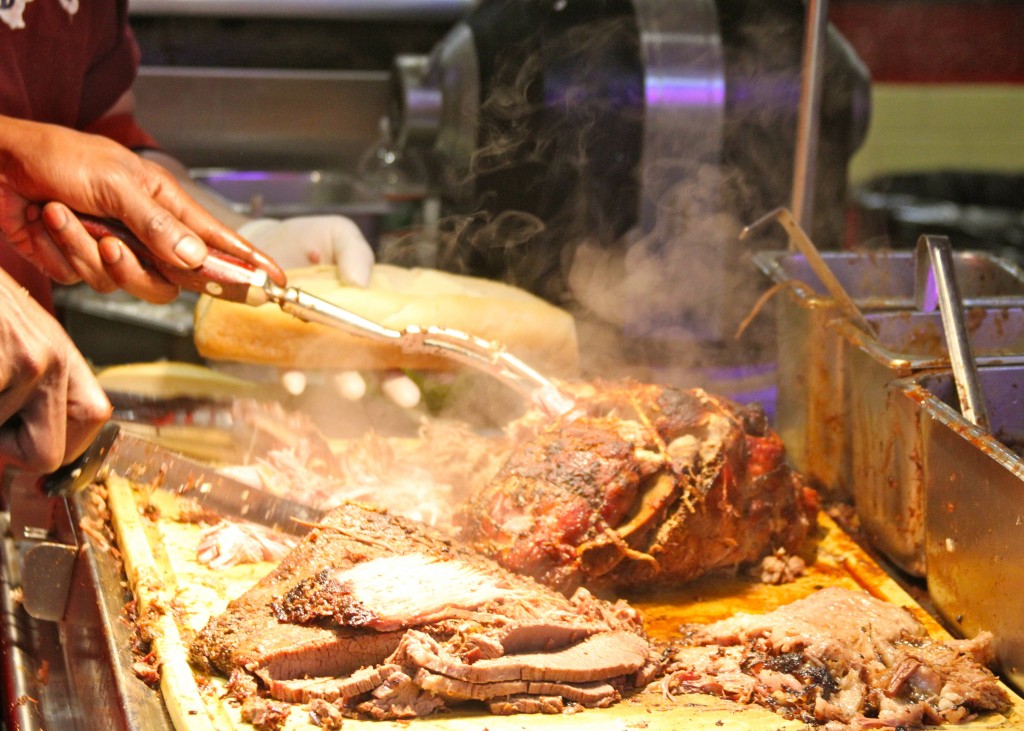 You get a choice between grilled peppers and greens (spinach or broccoli rabe). We ordered ours without the bun (of course) and a side of broccoli rabe. (You may recall how much we love that stuff) 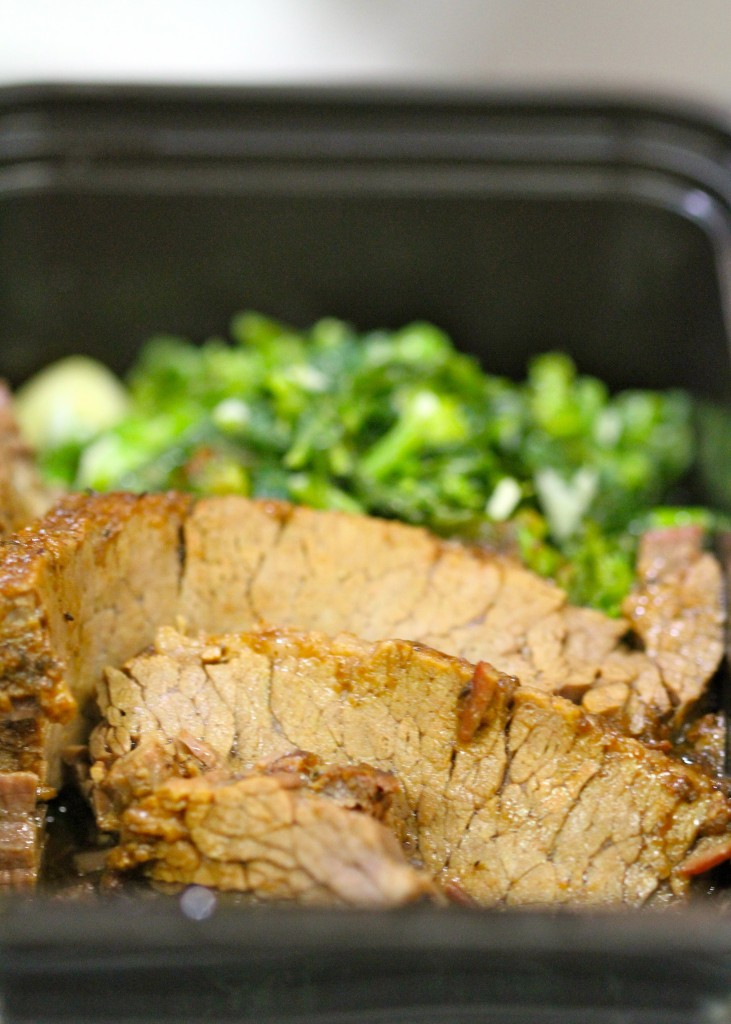 We also spied several other vendors of interest including one that had a huge selection of jerky. 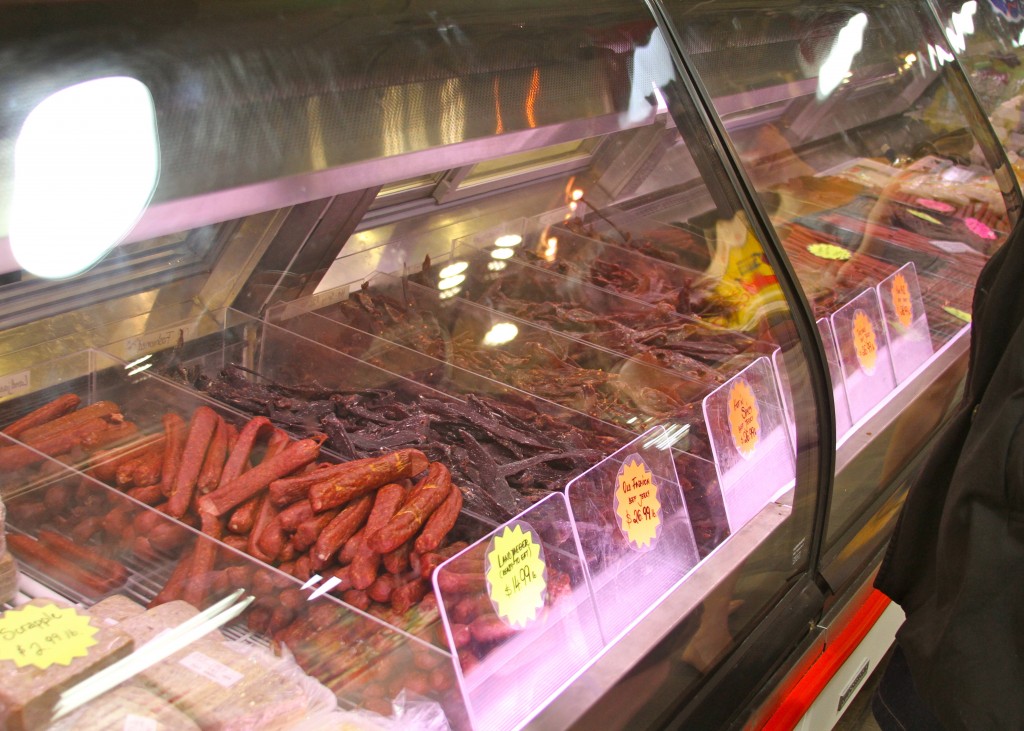 Back in the 1980s a large number of Amish merchants were recruited for the Market and several of them remain today. Here’s one that sells a lot of canned goods, especially pickled veggies. 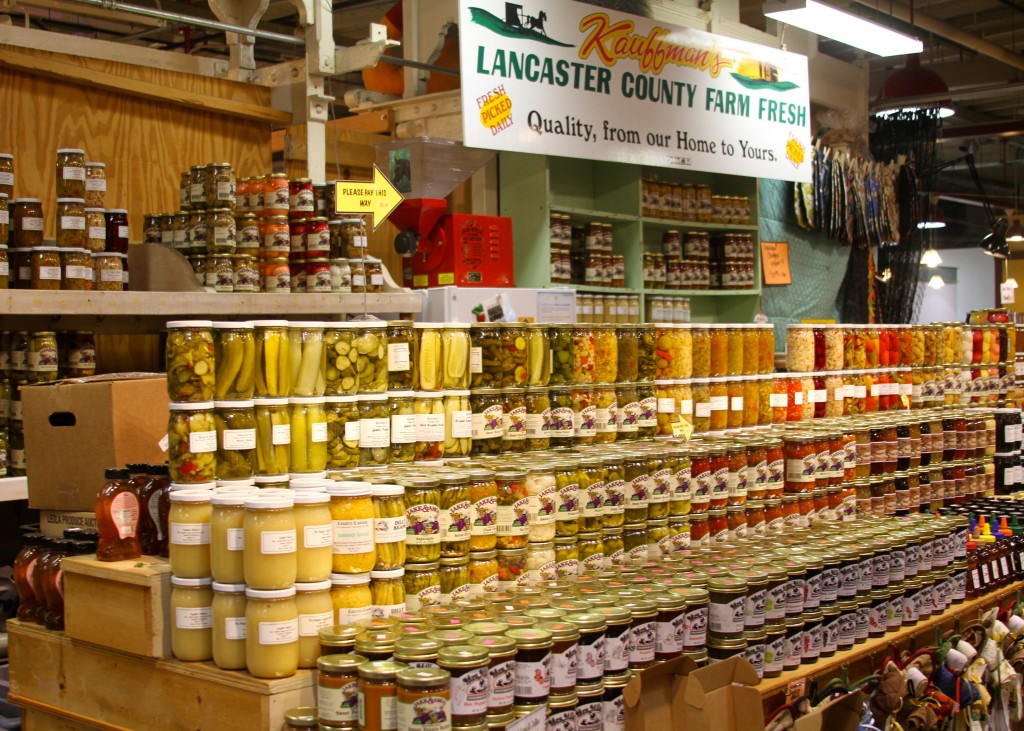 You can also find some pretty impressive offerings of fresh fish, cheeses and farm fresh fruits and vegetables. 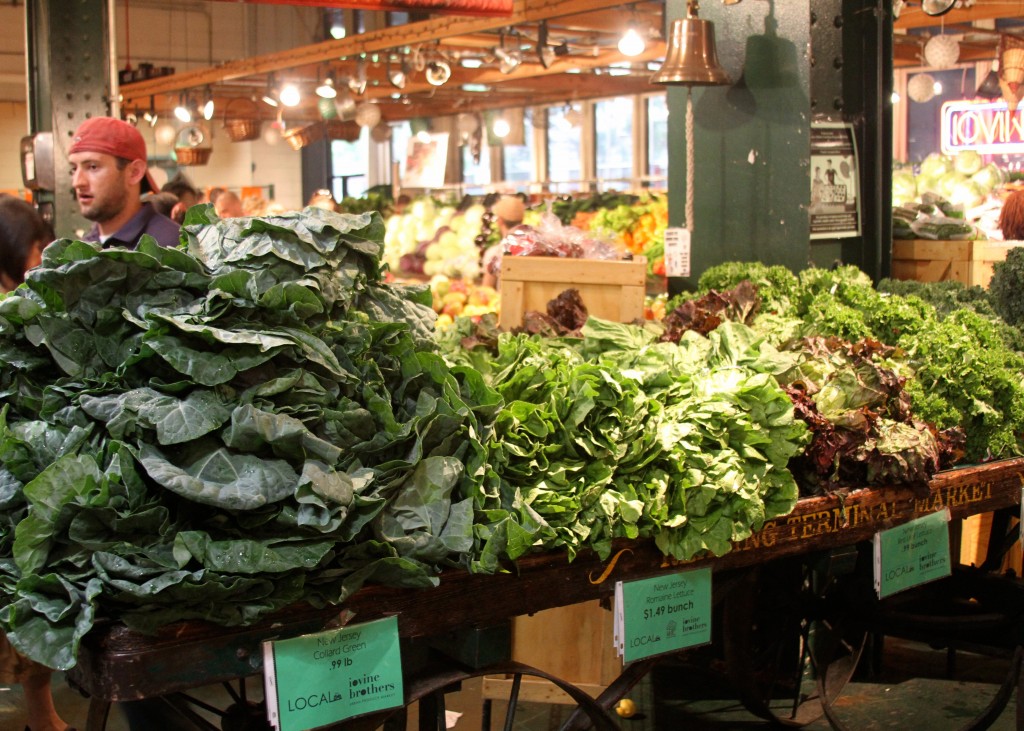 We also came upon a very impressive Italian food vendor. I just love the term “Salumeria”. 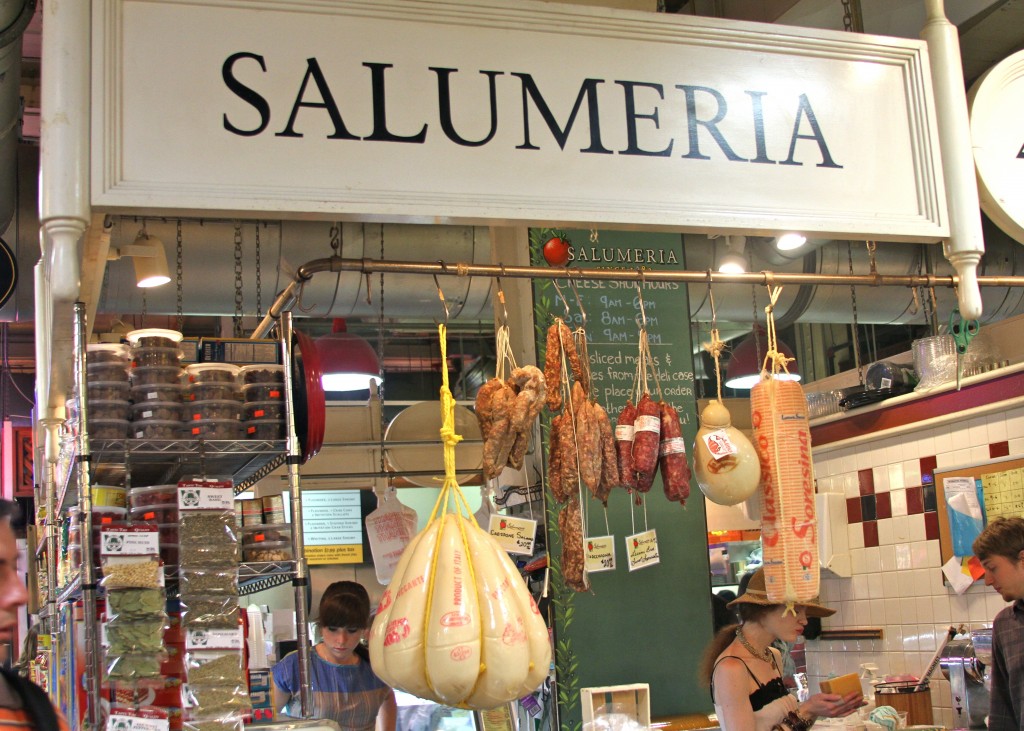 We could not resist trying some of the world famous ice cream at Bassetts.

The boys really had to twist my arm to sample (yeah, that’s two scoops) of the rich and creamy Dark Chocolate and Rum Raisin. 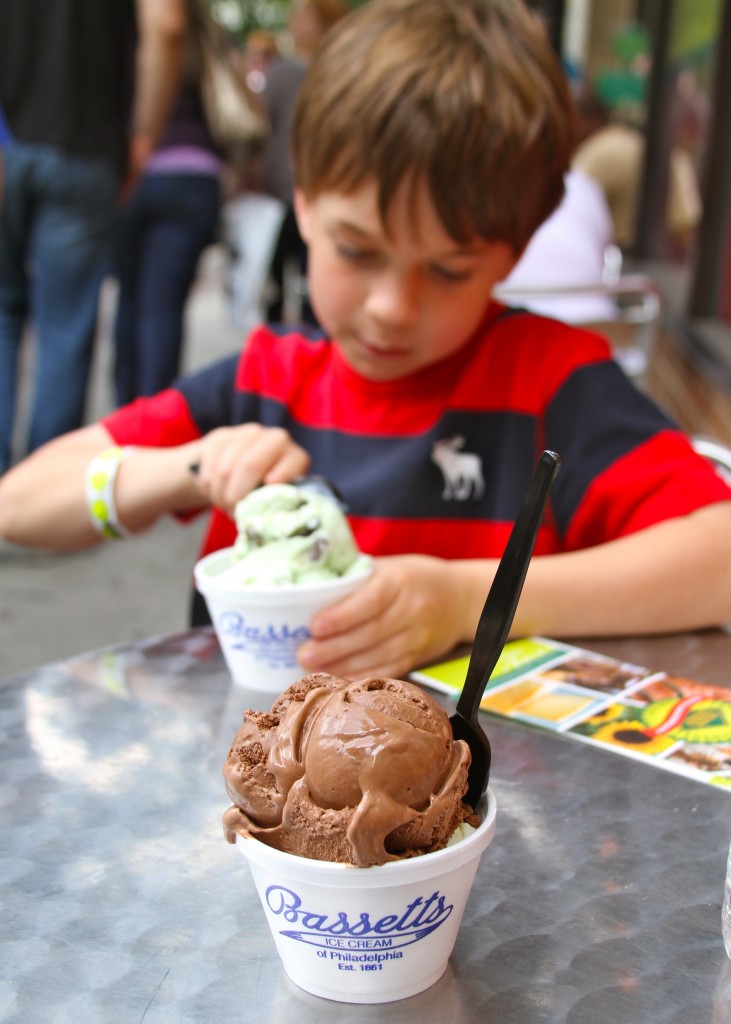 After lunch we headed back to Comic Con to shop for more action figures, comics and to take a few more pictures. My stalking of the handsome Supermen finally paid off and G was able to capture a shot of me with the men of steel. 🙂 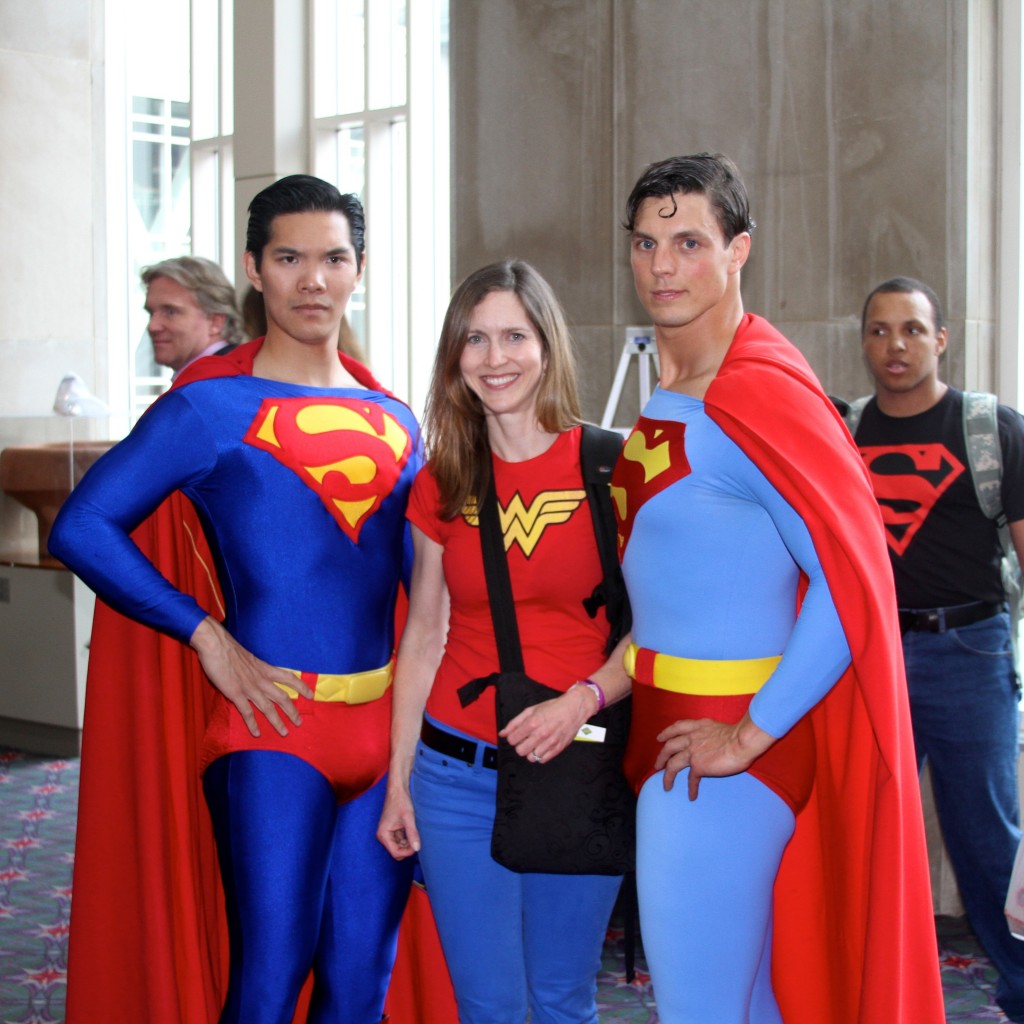 Thanks for stopping by and enduring our comic fan geekiness. And if you are ever in Philadelphia give the Reading Terminal Market a try for some decent paleo options.

Maybe We Should All Be More Like Boy George
Assateague Island in the Morning
HUGE Paleo and Wellness eBook Bundle Sale!
Tagged with → comic con • paleo