My husband’s boss had a party on Long Island this past weekend. You never turn down an invitation to your boss’ house…ever. And in this case his boss is awesome so we happily trekked to Long Island for the Saturday party and stayed the night with the intention of doing a little exploring the following day. The location we chose was the village of Southampton on the eastern end of Long Island. For years I have heard about “The Hamptons” and the crowds of New Yorkers who brave the traffic to spend luxurious weekends in this storied area.

The Village of Southampton

We spent a little time wandering around the downtown area drinking in the sites on that gorgeous, sunny and cool day. As you can see from this sign, the Village of Southampton has been around for a while. 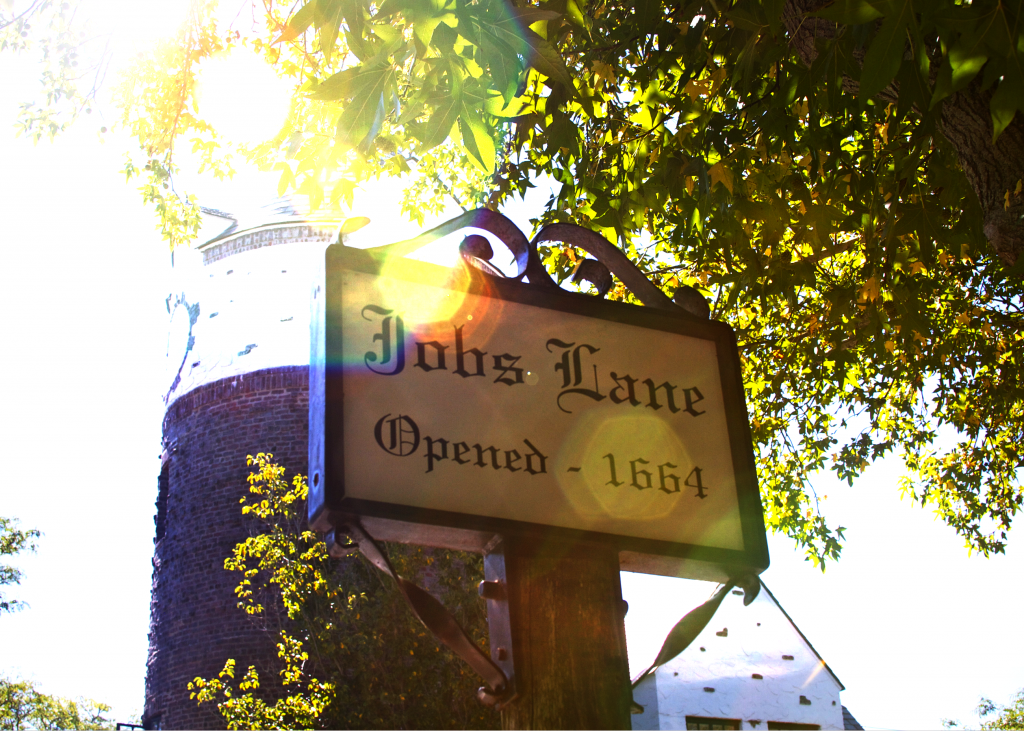 In fact, the Village of Southampton was settled in 1640 and incorporated in 1894. It began with a small group of English Puritans who set sail from Lynn, Massachusetts and landed on June 12, 1640 at what is now known as Conscience Point. It is the oldest English settlement in the state of New York and is named after the British Earl of Southampton.

We passed by the Presbyterian Church building. 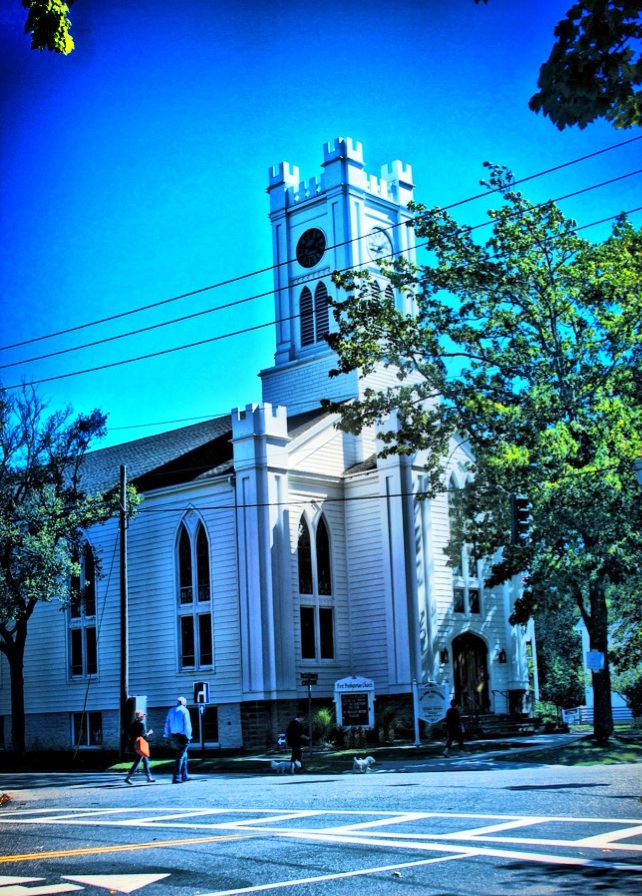 We said hello to a dog on the top of a car. 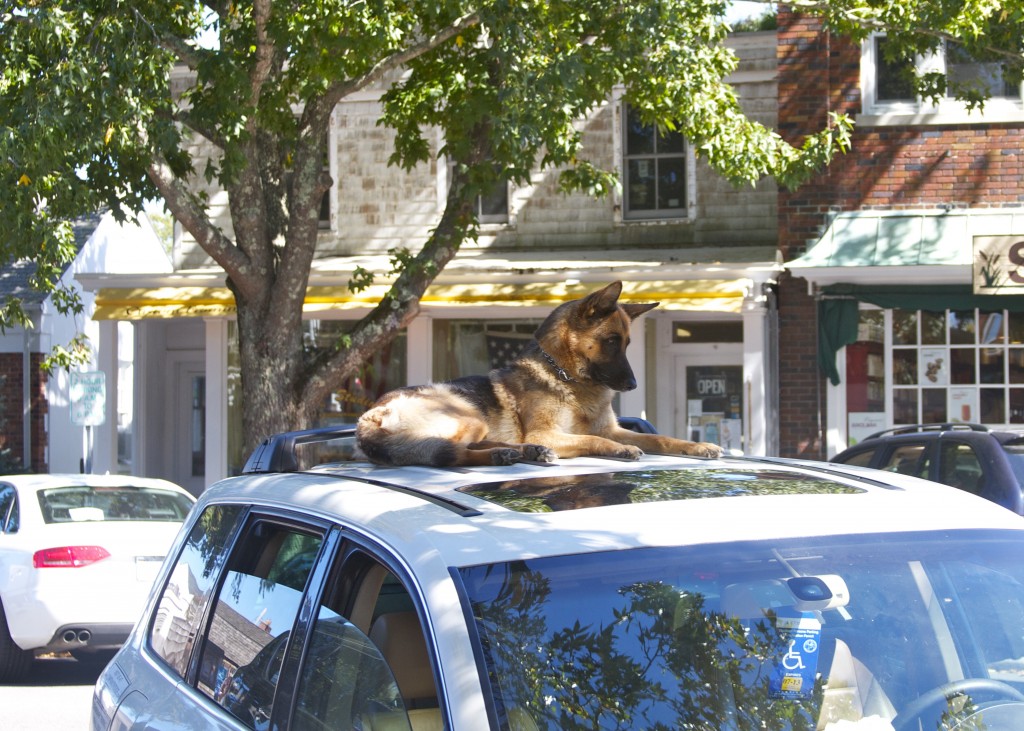 We happened upon a seriously cool car. A Dual Ghia. 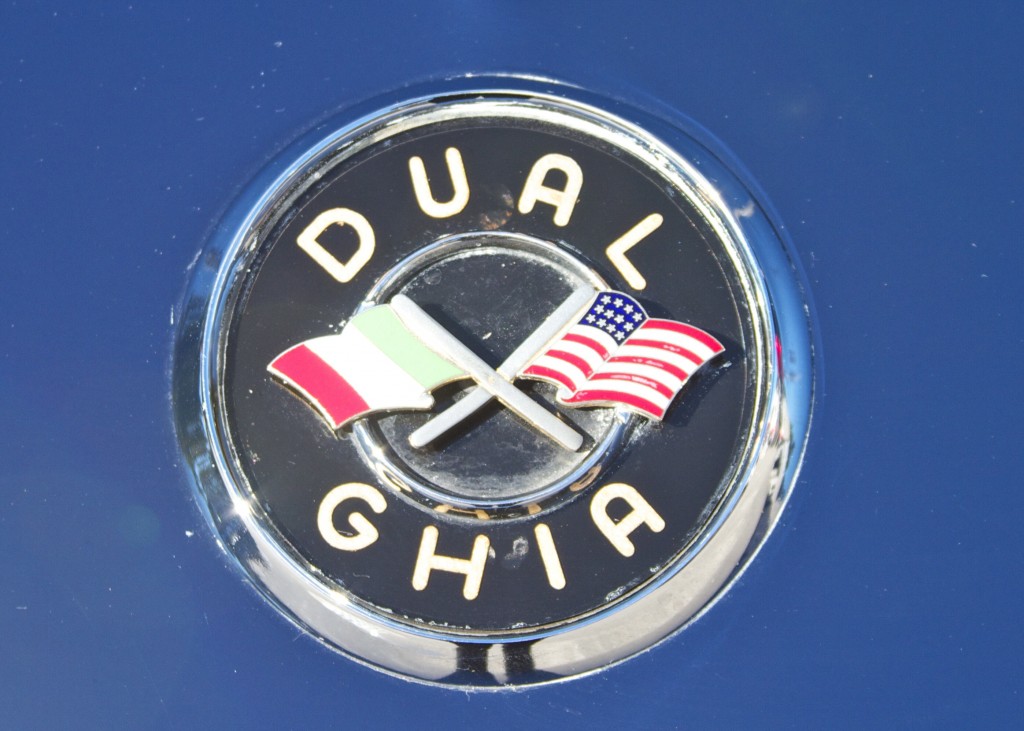 According to Wikipedia, the Dual Ghia is a rare, short-lived, automobile make, produced in the United States between 1956 and 1958. It was a joint venture between American and Italian car makers. 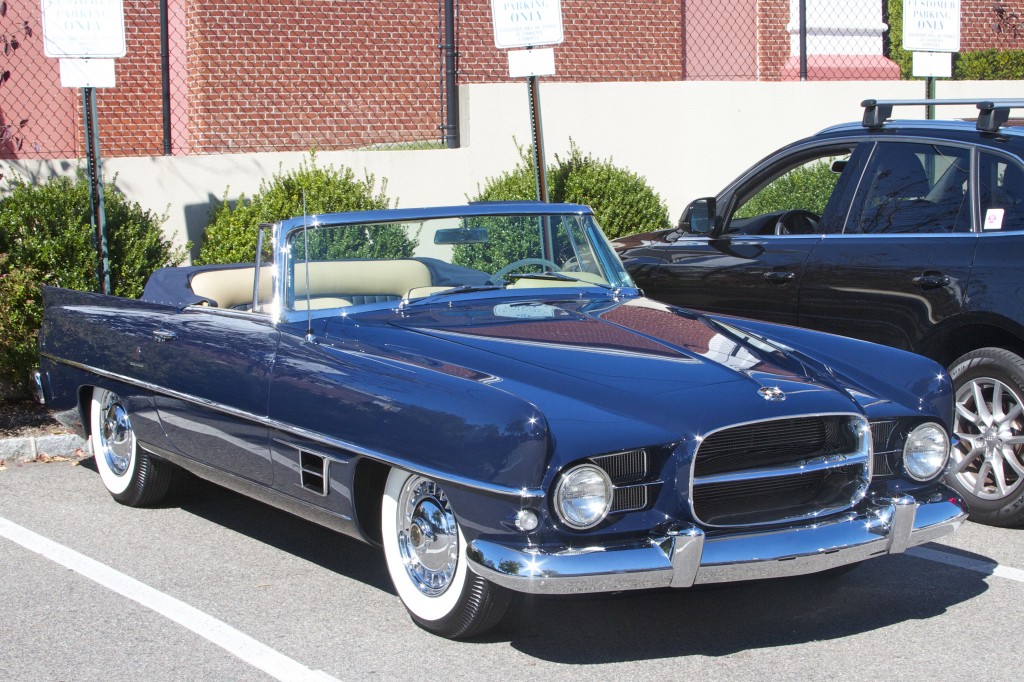 Out of the 117 cars produced, 32 still existed as of 2006. The cars were mostly bought by American celebrities, such as Frank Sinatra, Sterling Hayden, Richard Nixon and Desi Arnaz. Ronald Reagan owned one, but lost it in a high-stakes poker game with then-President Lyndon Johnson. Dean Martin can be seen driving his Dual-Ghia in the film Kiss Me, Stupid. 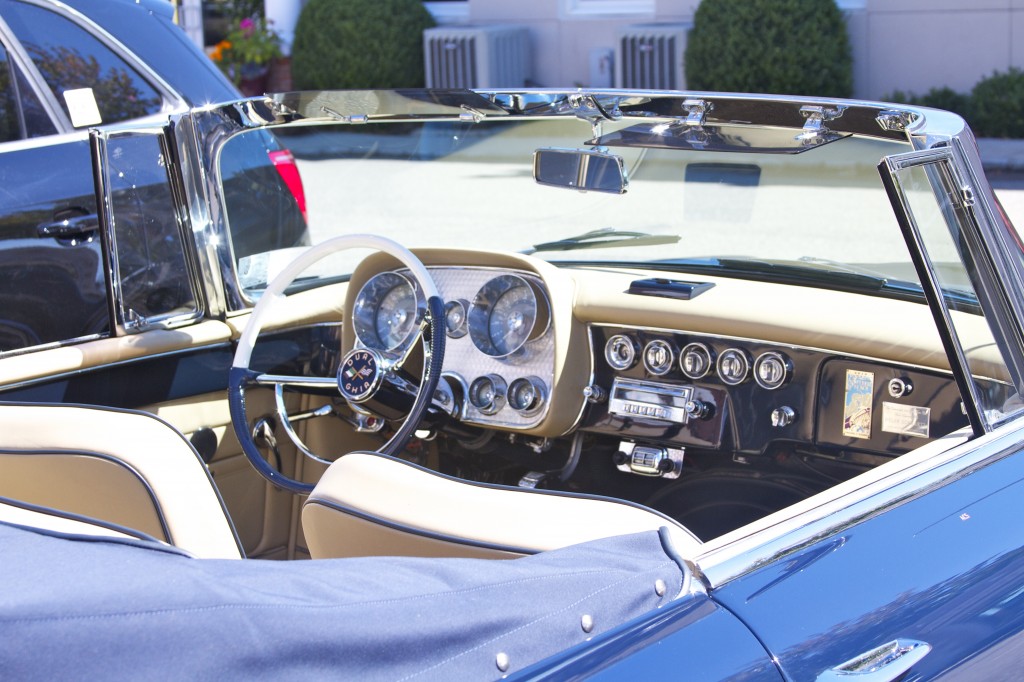 After gawking at the Dual Ghia – hoping to catch a glimpse of a celebrity owner – we visited a few unique stores in town including a cheese shop. It has some amazing selections and I noticed their deli offers gluten-free bread. Not paleo, but at least a step in the right direction. 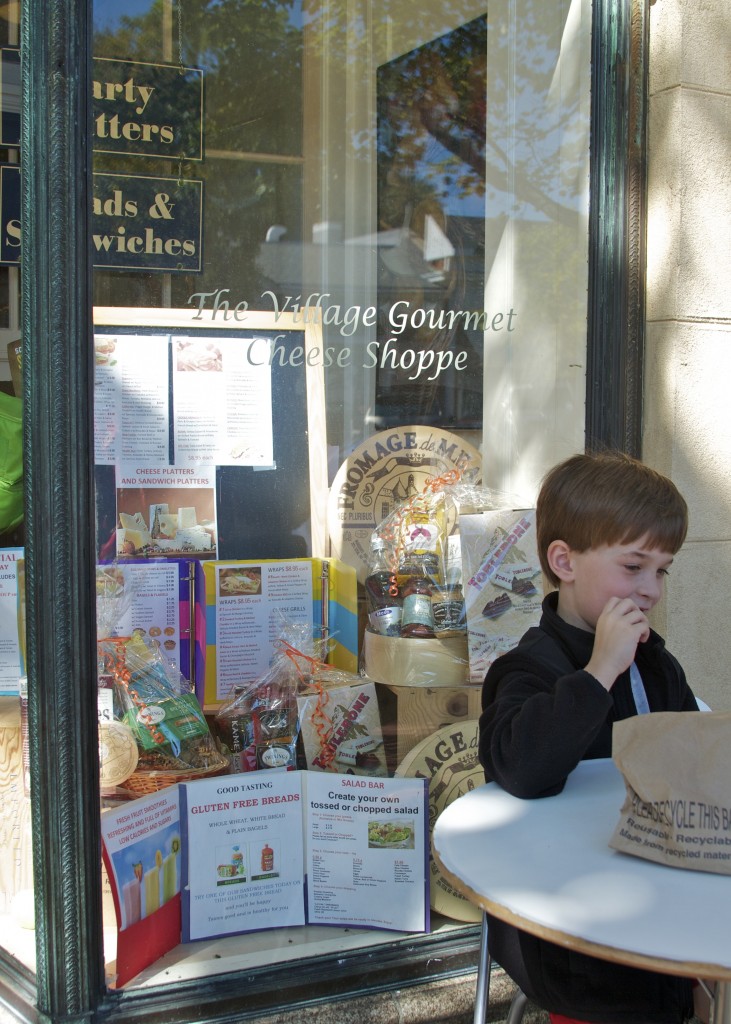 We investigated a fudge shop but managed to avoid indulging in the sweet treats. Such willpower! 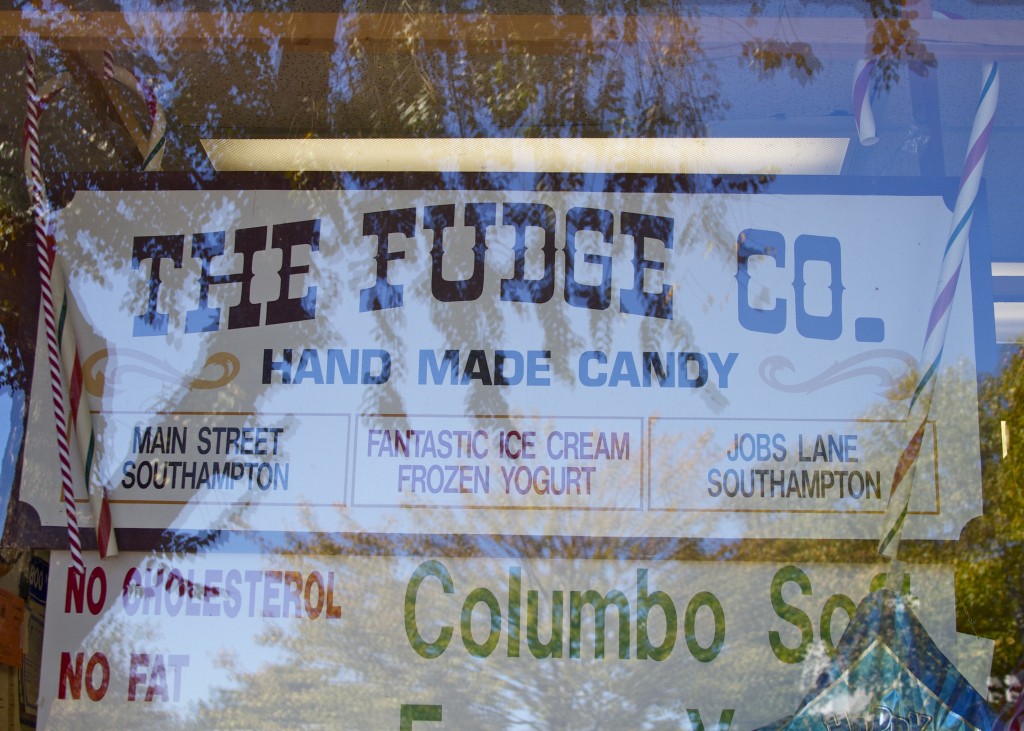 Our willpower did not hold out long…

As we continued our exploration of the village, we came  upon a Farmer’s Market with some interesting finds. One of the standouts was Donna McCue of “Fat Ass Fudge”. 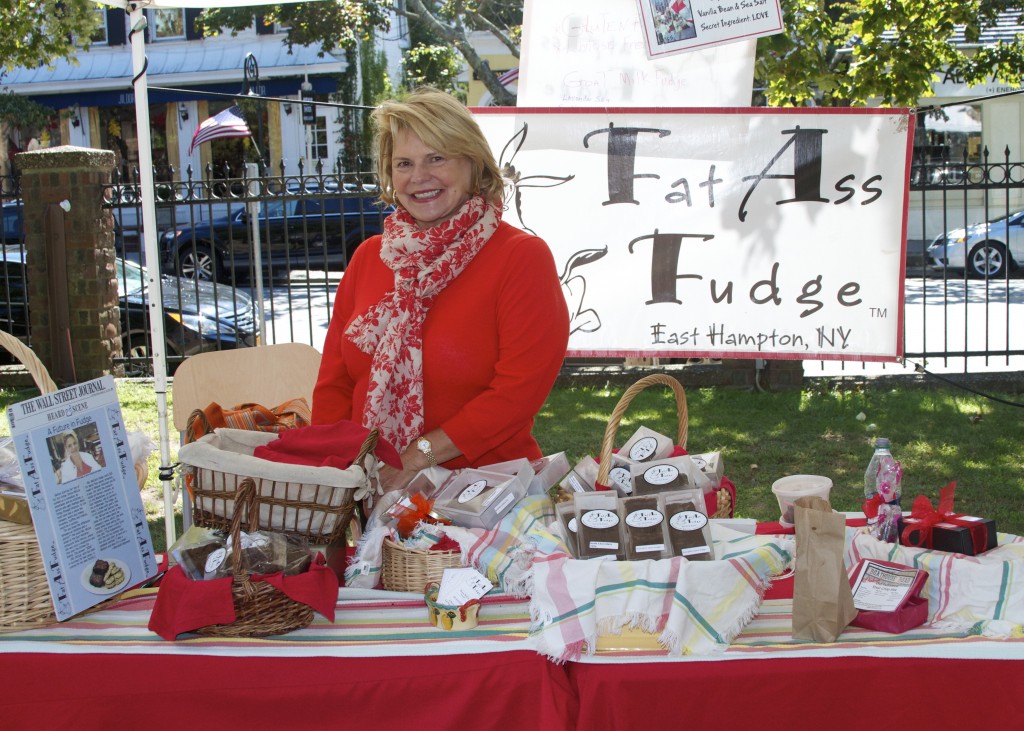 Ordinarily I would pass by a fudge vendor because it’s not something I usually eat – too much sugar. But this fudge caught my attention. 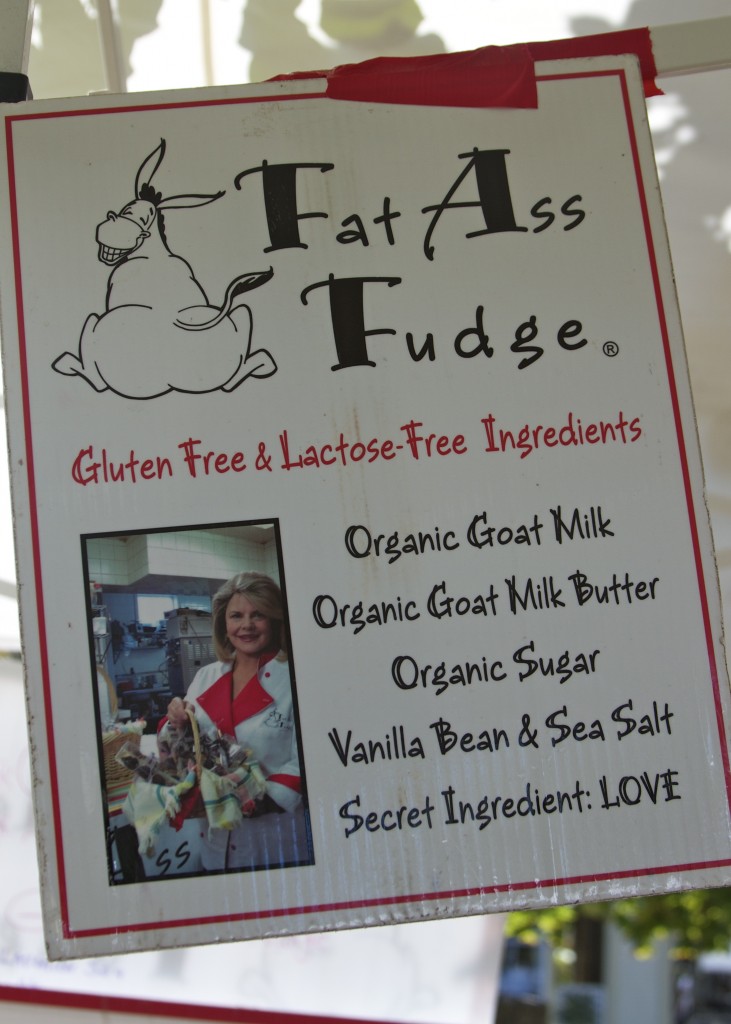 You read correctly. This fudge is made with goat milk and goat milk butter. That’s pretty unique! It was not difficult rationalizing we should try the fudge just for the experience of eating a confection with such amazing ingredients. Donna, a former comedian, is a great saleswoman. She explained to my boys, who giggled uncontrollably at the name of her company, that “ass” is another word for donkey – see the donkey in the logo?!

Thanks for that one, Donna. 🙂

We shelled out some dough for a chunk of White Chocolate Fudge and and bigger chunk of Dark Chocolate Sea Salt Fudge. It was AMAZING! 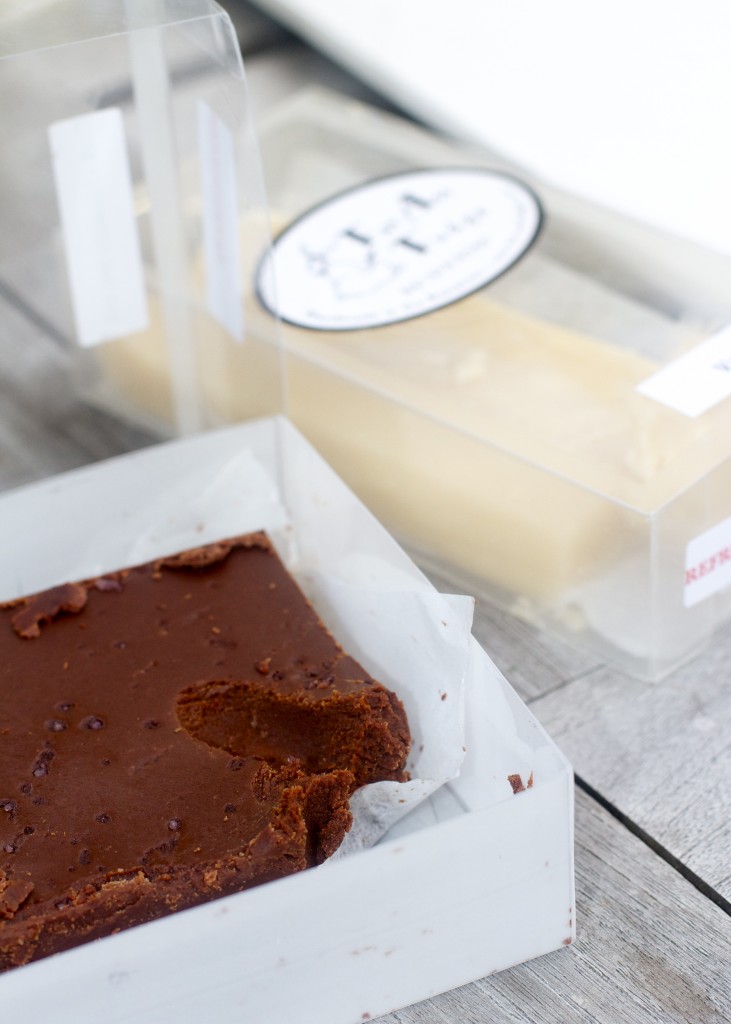 A tiny bit goes a long way because the fudge is incredibly rich. The goat’s milk flavor shines through just enough to accent the chocolate but not enough to be reminiscent of cheese. The dark chocolate fudge with the sea salt was my favorite because the sweet and salty combination is hard to beat.

My boys were thrilled to have such a tasty treat. Note the finger mark in the chocolate!

Nathaniel, who I usually bribe to be my model, found it especially motivating. 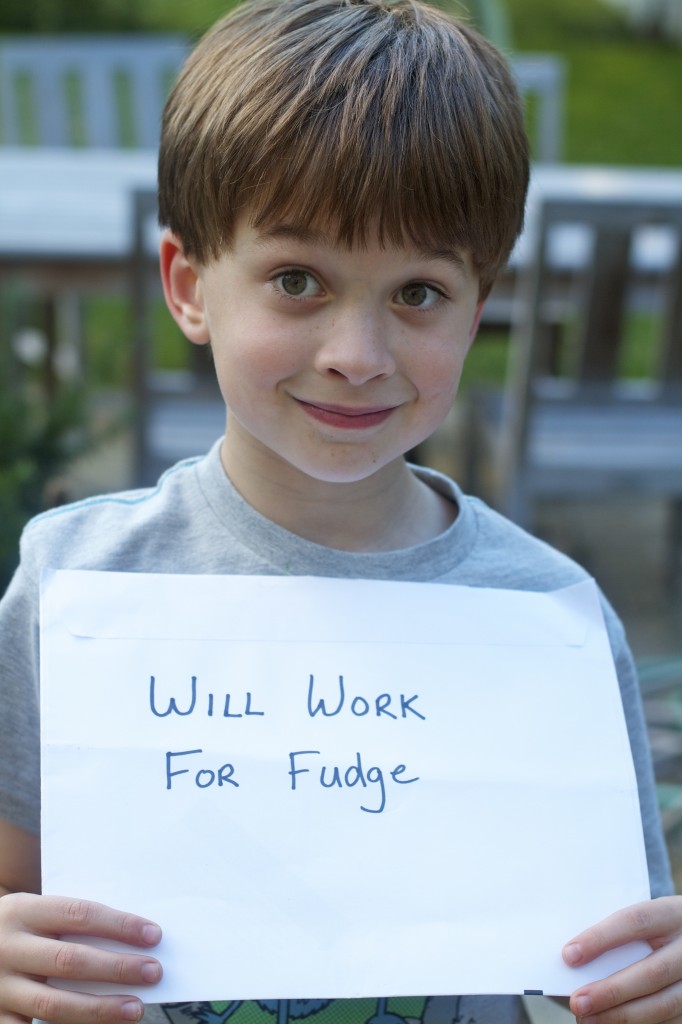 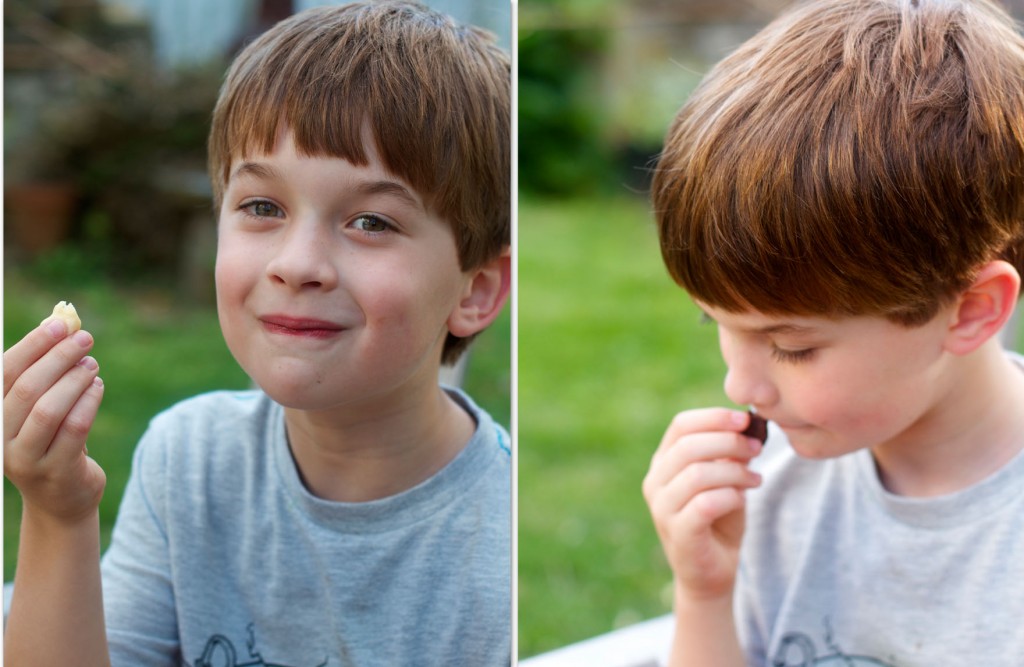 We also came across another vendor with some interesting food products; Josephine’s Feast.

Josephine’s Feast is a collection of luxurious confiture made by hand in an artisanal manner.  They work with small family farms and rural foragers on the east end of Long Island and Upstate New York selecting the very best seasonal, sustainable, local & organic fruits, vegetables and herbs for all of their products. They prepare everything by hand and cook it in small batches – using a minimum amount of organic sugar. Josephine’s Feast offers Sugarless Jam Fruit spread, Pickles, chutneys, spice mixes and sauces and much more.

We tasted several of their products and ultimately chose this Sugar-Free Harvest Fruit Spread. Yum! 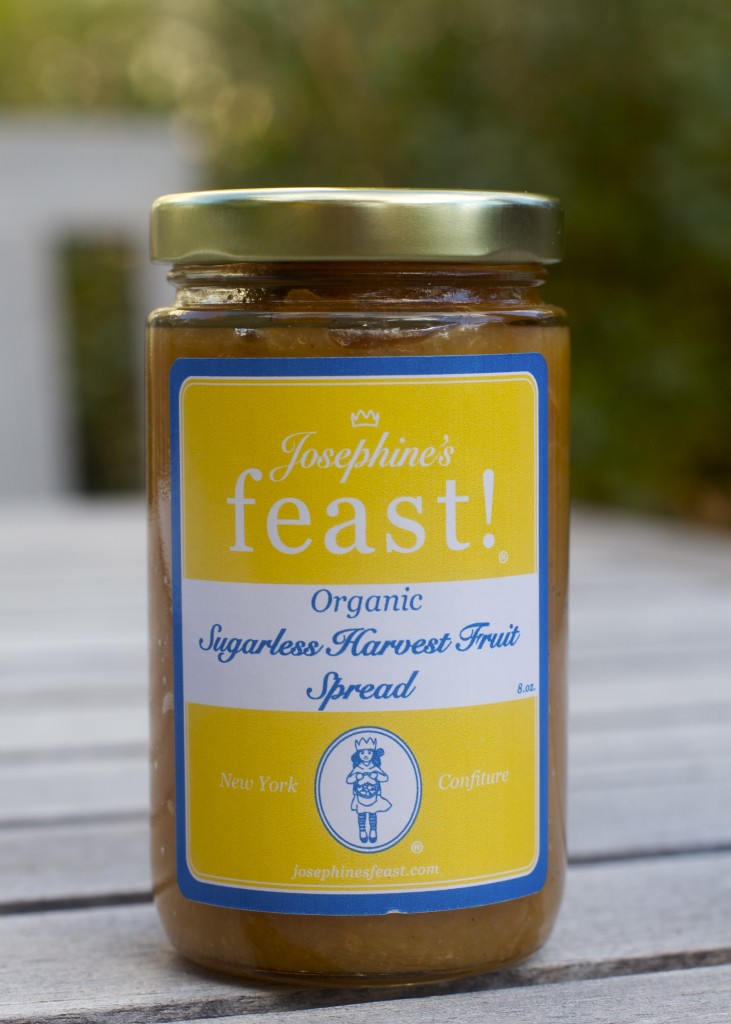 After the farmer’s market we headed to brunch at The Plaza Cafe.

I ordered a Bloody Mary, not because I love Bloody Marys but because it seemed like the thing to do at a brunch. Bloody Marys are pretty but I decided they really aren’t my thing.

The boys split an order of steak and eggs and they were quite pleased. 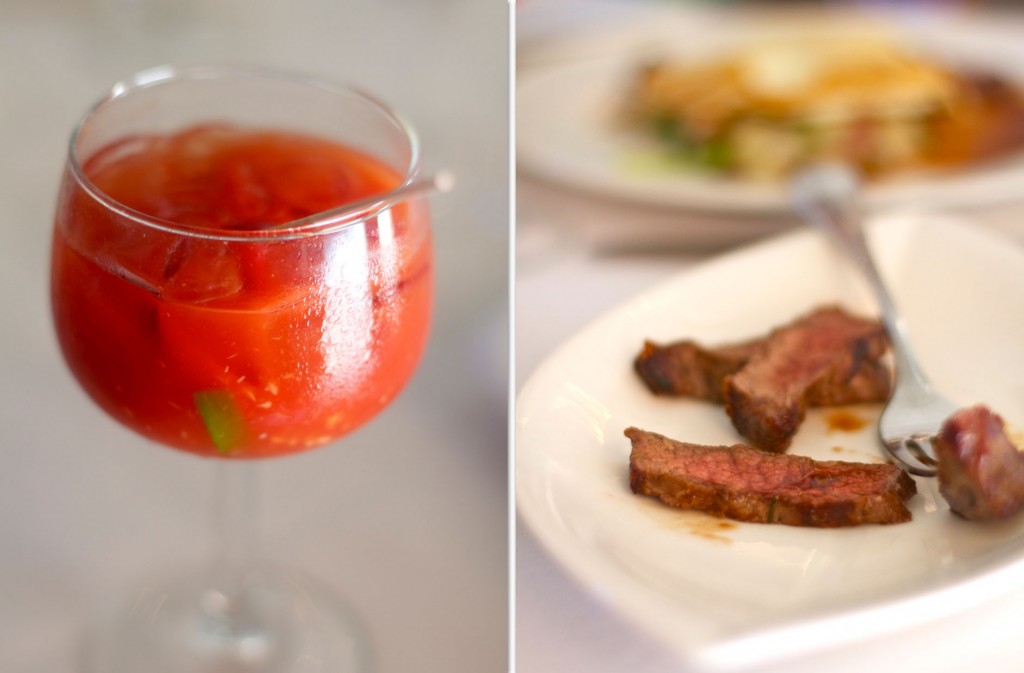 I was interested in the Duck Confit Hash dish but assumed it would be made with white potatoes. But to my delight they made the hash using sweet potatoes! How could I resist this perfect paleo brunch dish? I couldn’t. After verifying it is gluten-free I placed my order then dug in. 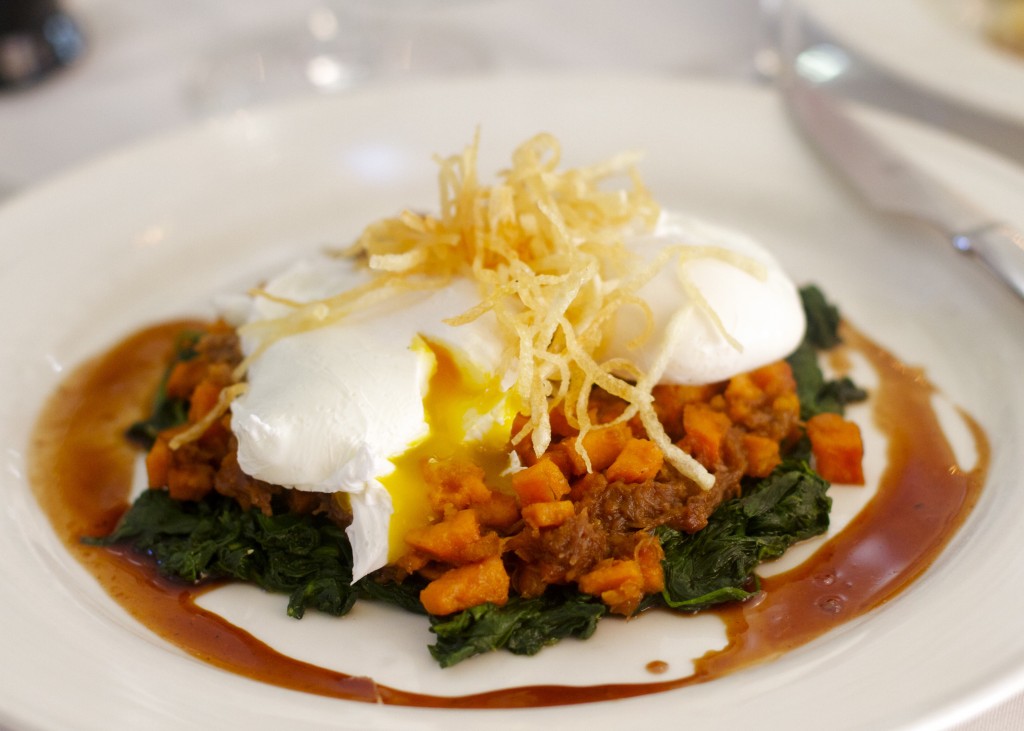 It was delicious. The eggs were perfectly cooked. The creamy, fatty, duck confit combined with the sweet potatoes and spinach made for the perfect brunch dish. 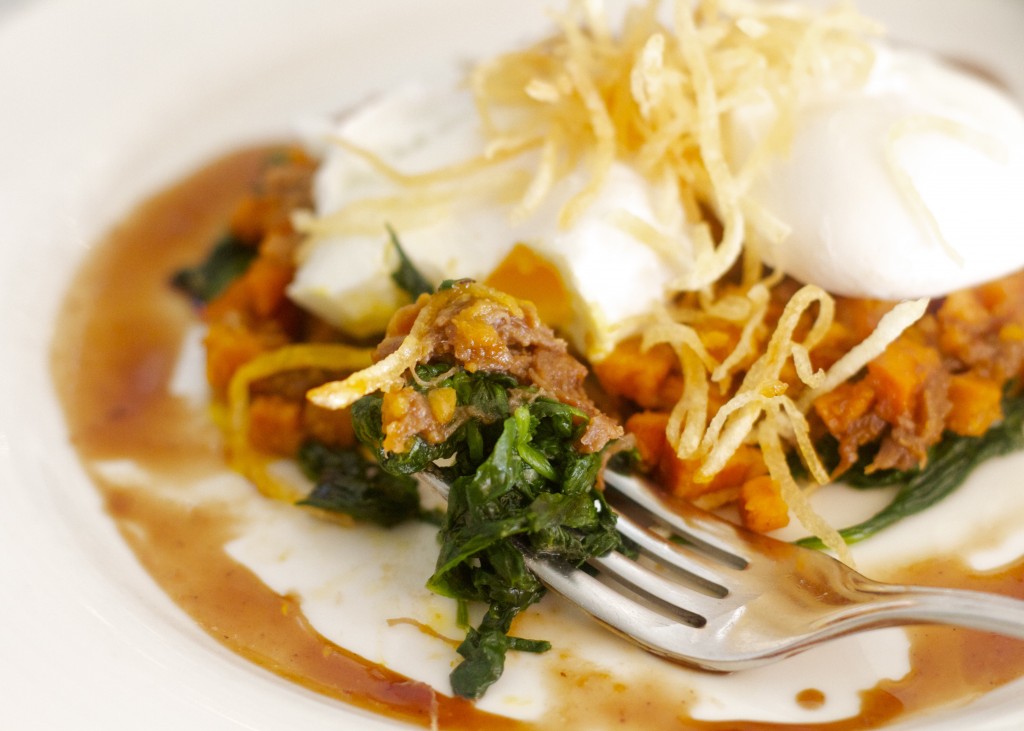 In fact, I liked it so much I have been testing out a similar recipe at home I hope to post at the end of this week. Stay tuned!

Our final stop was Coopers Beach. 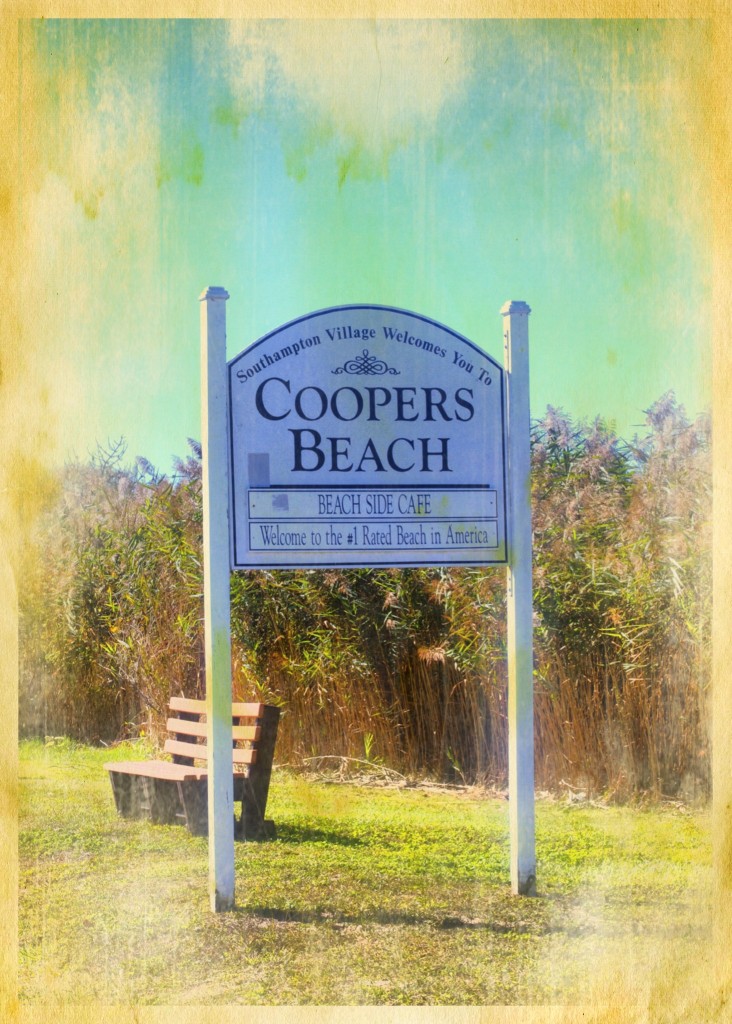 In 2010 Coopers Beach was listed as America’s top beach according to the annual list of the best American beaches compiled by Dr. Stephen Leatherman, AKA Dr. Beach. 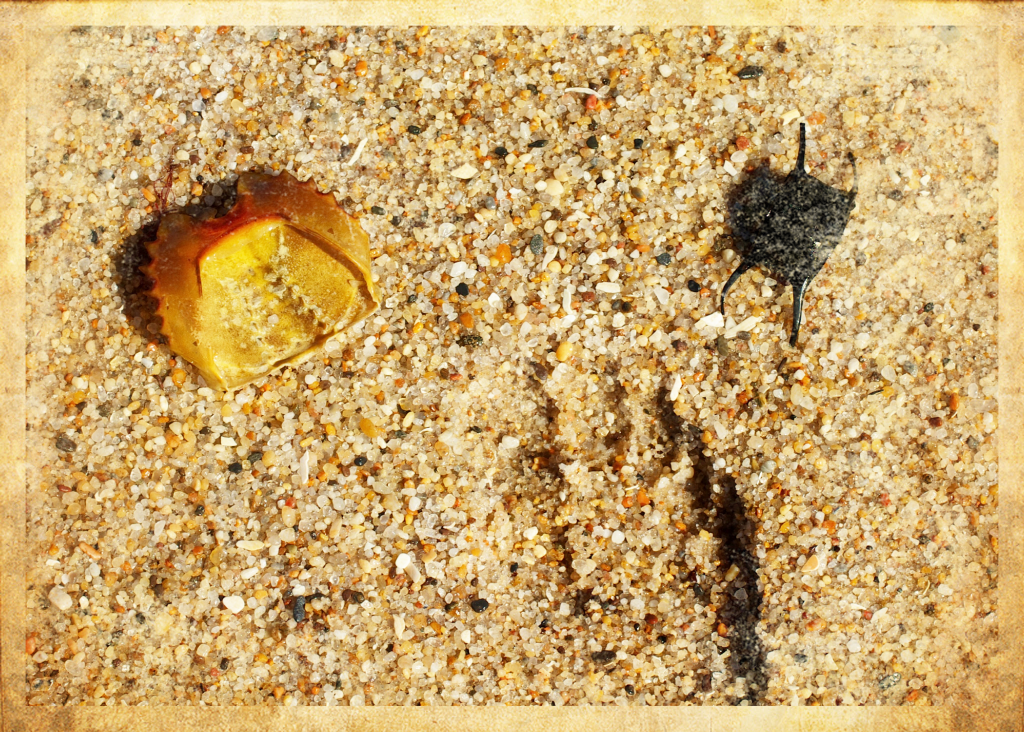 We strolled on the gorgeous shore and enjoyed the crashing of the waves and the sun on our faces. 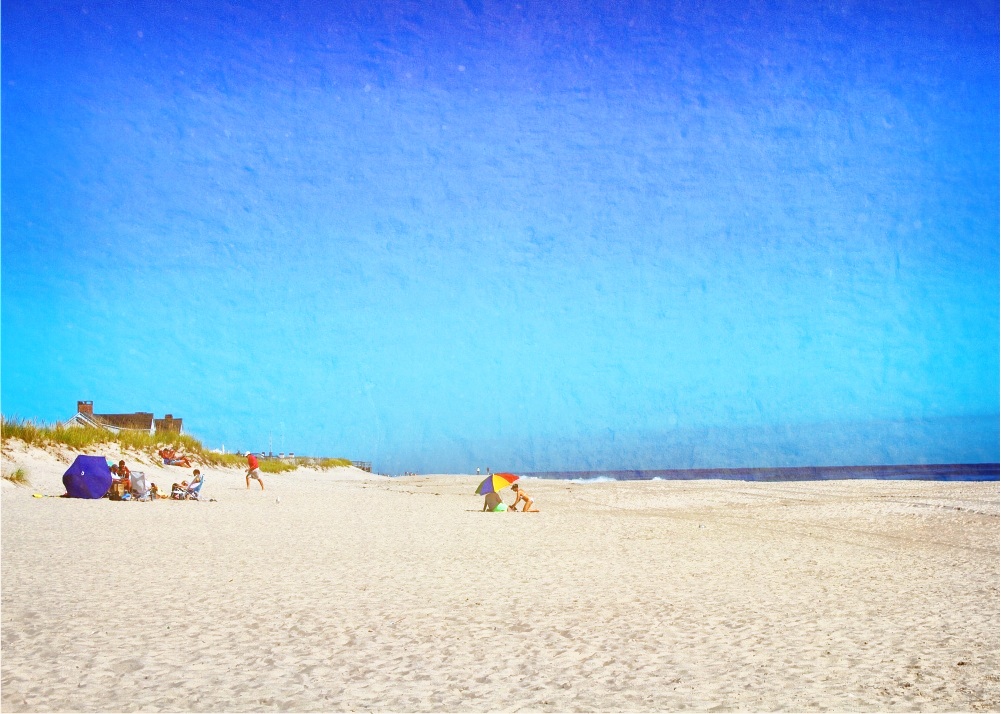 Nathaniel stopped for a moment to contemplate his existence. 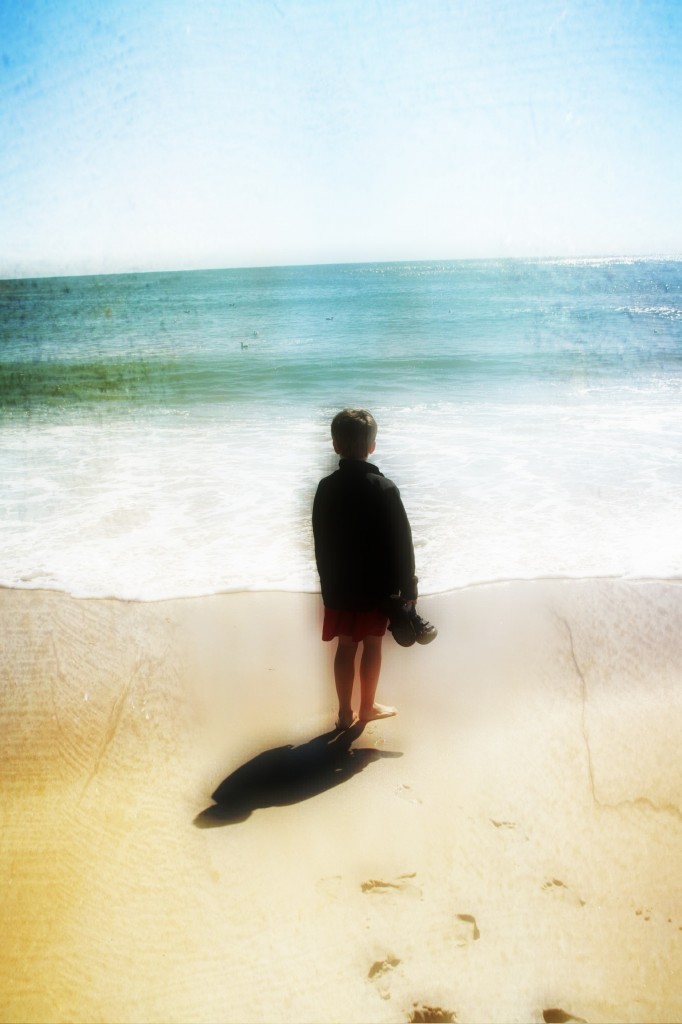 After our stroll on the beach we headed back home to finish up some homework, nibble on some fudge and get ready for the rest of our week.

If you would like to receive posts by email subscribe here. (If you don’t see the confirmation email right away check your spam folder.)