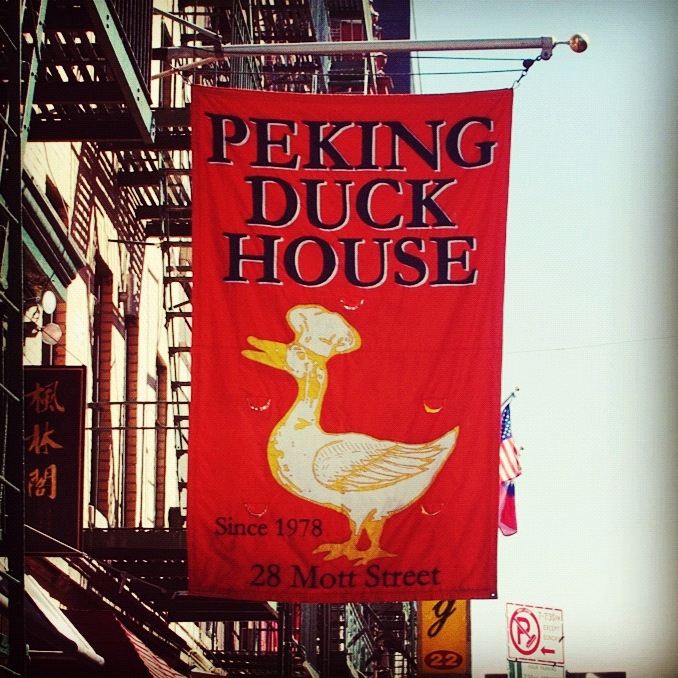 This week is Spring Break for my two boys. While we may not be going on a big vacation, we are determined to find a few fun things to do in the nice weather. We kept our eyes on the forecast and picked the perfect day for a jaunt into New York City. I initially dragged Nathaniel (aka Sweet Pea) and Benjamin (aka Big Boy) to B&H Photo/Video Superstore where I did a little shopping. (That place is absolutely mind-blowing. But I’ll save that post for another day….) Our primary destination was Chinatown, which is my boys’ favorite part of the City for a few reasons. Our first stop was Peking Duck House at 28 Mott Street for lunch. The three of us were able to enjoy the full Peking Duck experience with a little twist in the appetizer department.

The boys ordered soup to start the meal but I was drawn to the cold appetizer menu which boasted such things as Spicy White Cabbage.

Ordering duck feet was more for the culinary adventure than a strong desire to dine on feet. Let’s be honest, eating duck feet does not sound especially awesome. But I have to say they were not half bad. The waiter seemed a little surprised I ordered it and I suspect the dish is enjoyed more by locals than the tourist crowd. The duck feet were mildly flavored like broth and soft enough to be cut with a fork. As nutrition goes, duck feet are full of cartilage which is a really great food for joint health -assuming you can get past the texture.

Benjamin was unconcerned with his joint health. Even though he was initially willing to give it a try, once he realized the duck feet are served cold, he changed his mind. Imagine that! But Nathaniel decided he wanted to go for it and I am completely impressed by his courage and adventurous spirit. Here are a few shots of Nathaniel on his culinary adventure.

He’s willing, but with trepidation. 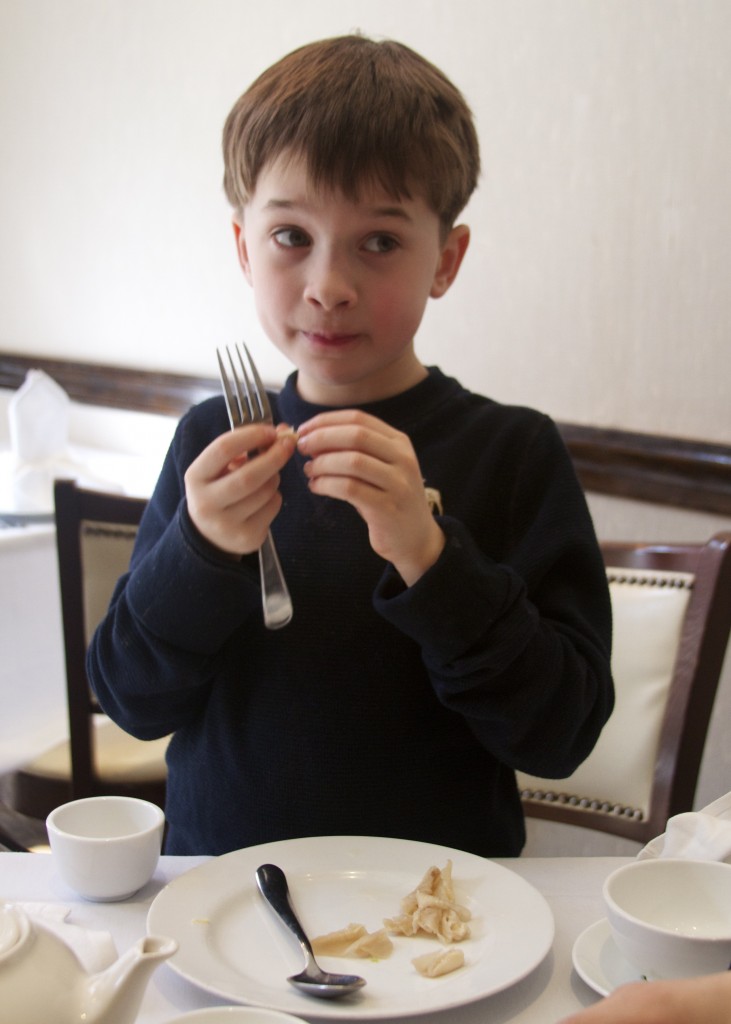 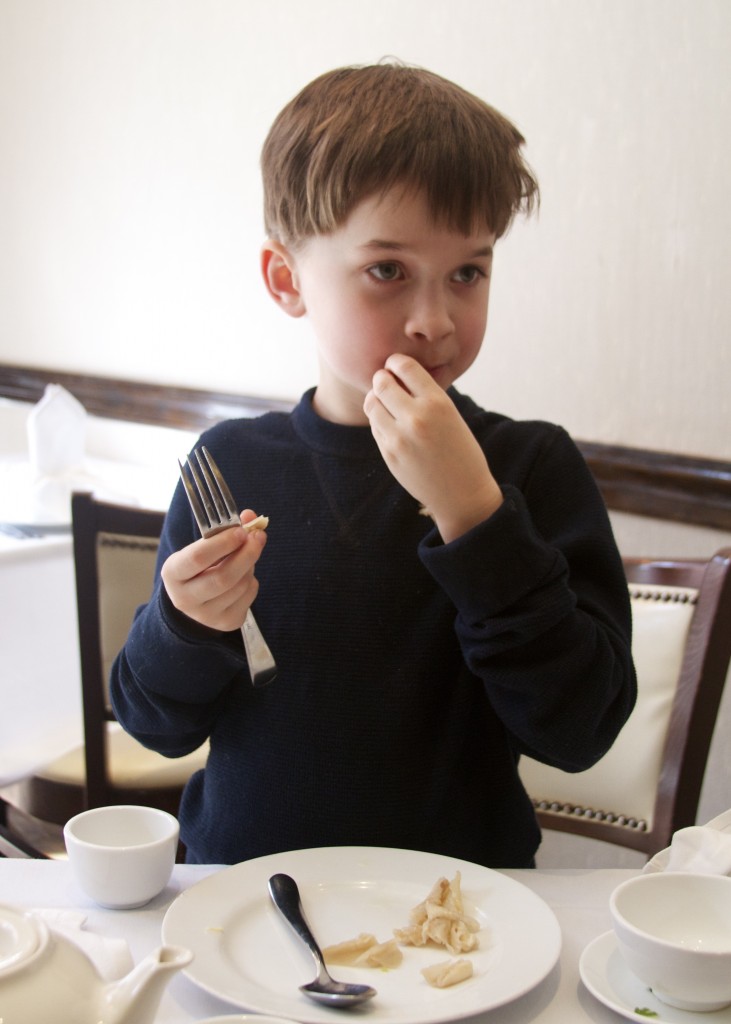 Okay, this is not going as well as hoped. 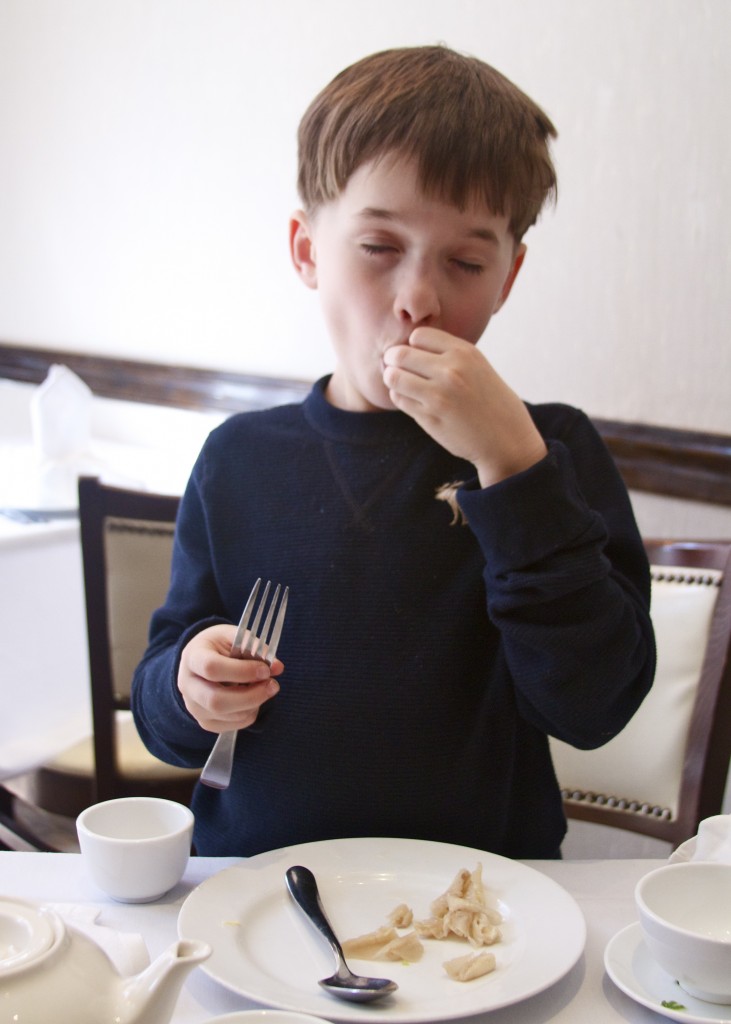 Whoa. These duck feet are a little, um, rubbery. 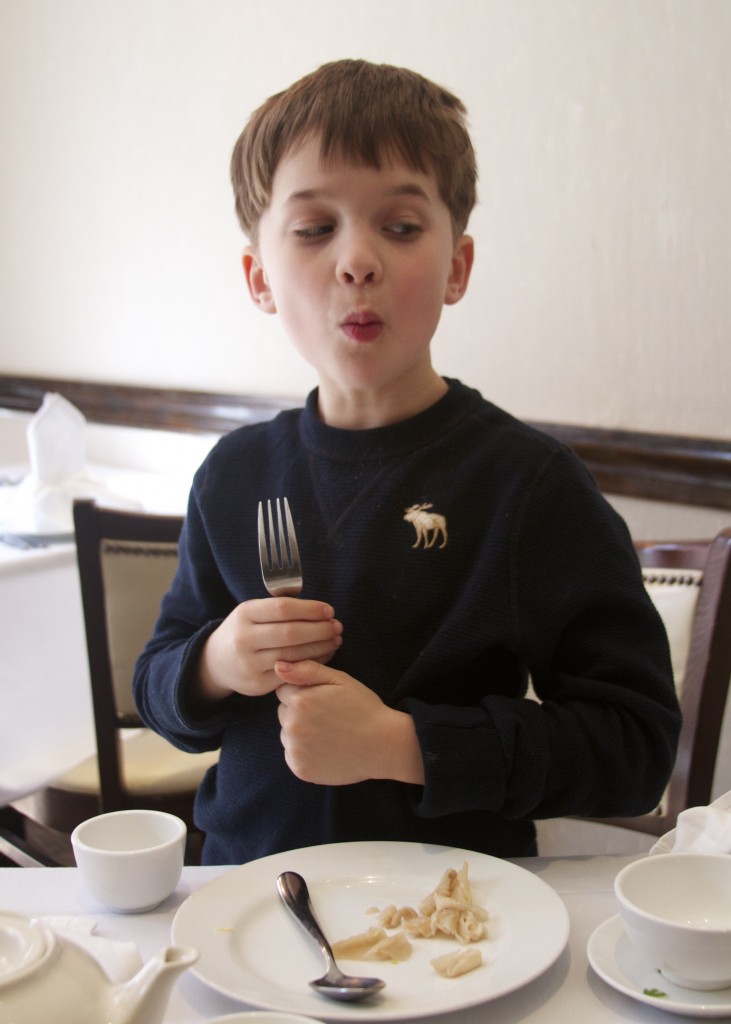 There’s a nice taste of broth here…but getting past the texture ain’t easy. 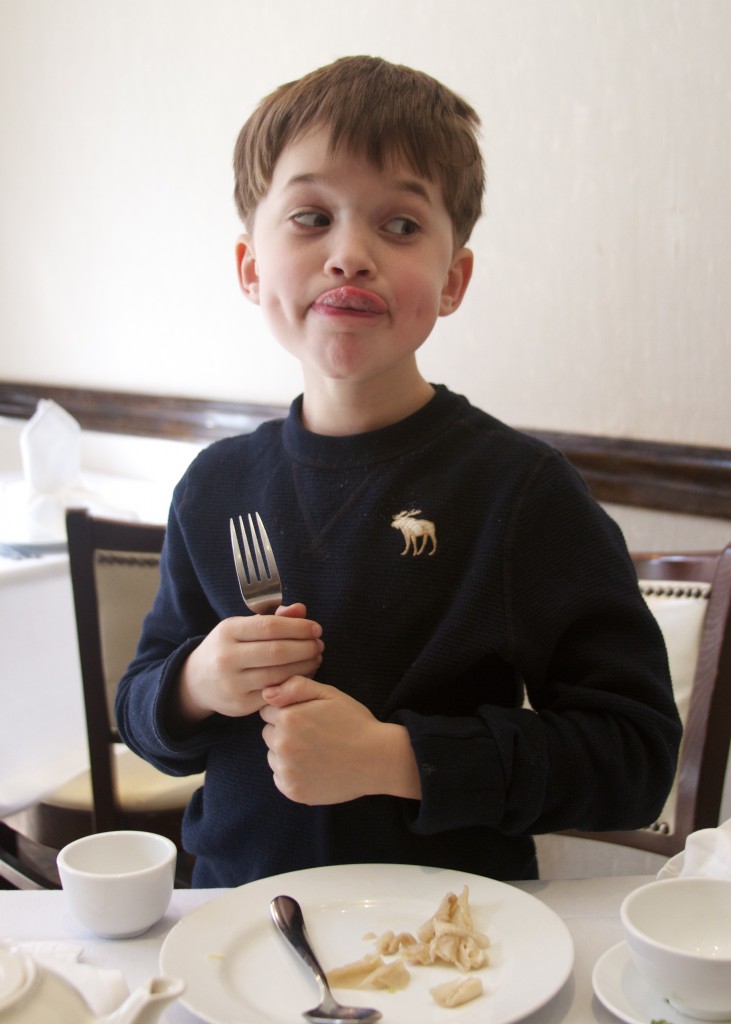 This is the face of a boy trying his best to please his mommy. 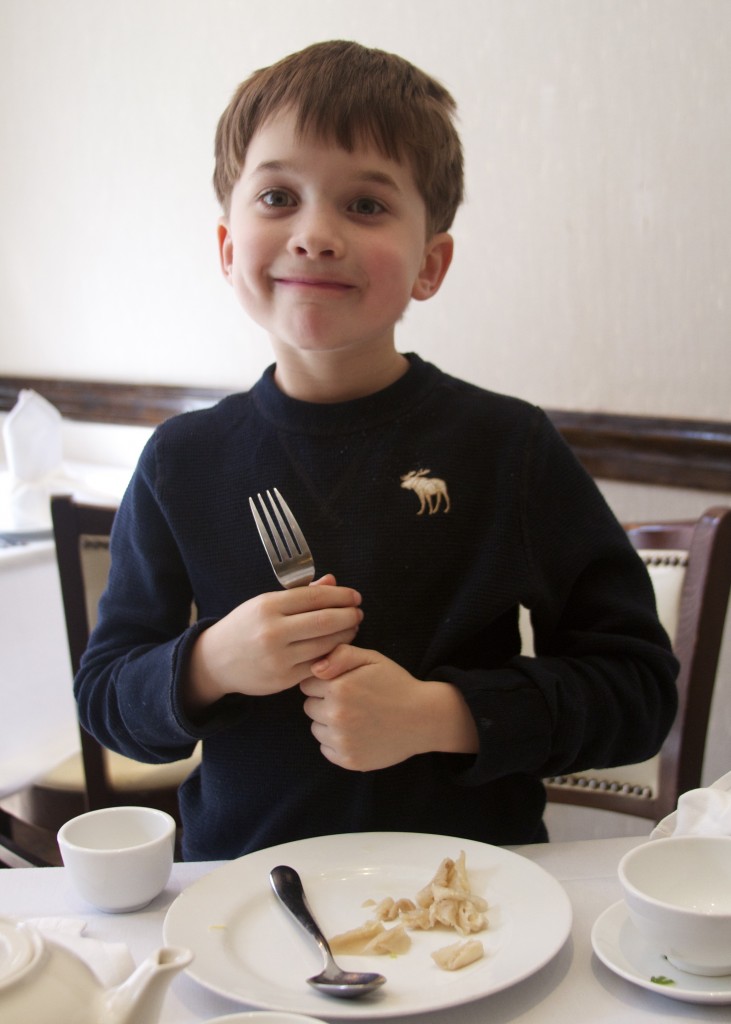 Nathaniel definitely made a valiant effort. I told him how proud I am of his willingness to try this exotic dish. I also told him he is NOT expected to like it or pretend he does when he does not. Eating boneless duck feet when you are seven years old (or any age, for that matter) is pretty tough. I am duly impressed.

As for the other appetizer, the Spicy White Cabbage was terrific. It was served cold as well and reminded me a bit of Kimchi only sweeter. There was quite a kick to this dish and it makes a good accompaniment to the duck feet – or any other mildly flavored meat dish if feet are not your thing. 😉 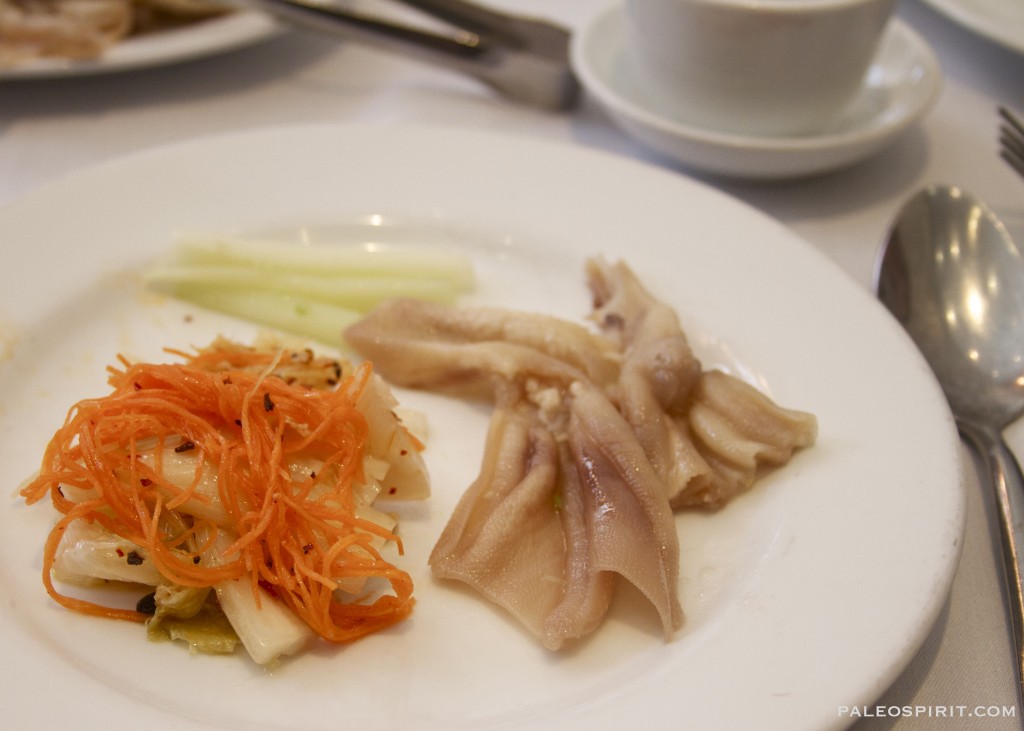 Once we were done with our appetizers, it was time for the main attraction, Peking Duck. Peking Duck is one of the most sophisticated dishes in Chinese cooking. To prepare the duck, air is first pumped into the duck to stretch and loosen the skin, then boiled water is repeatedly spread over the bird which is then dried. The dried skin is rubbed with maltose* and the duck is then roasted in a hot oven until the meat is tender and the skin is very crispy. The Peking Duck House chef came out to our table to expertly cut the meat from the duck while we watched. 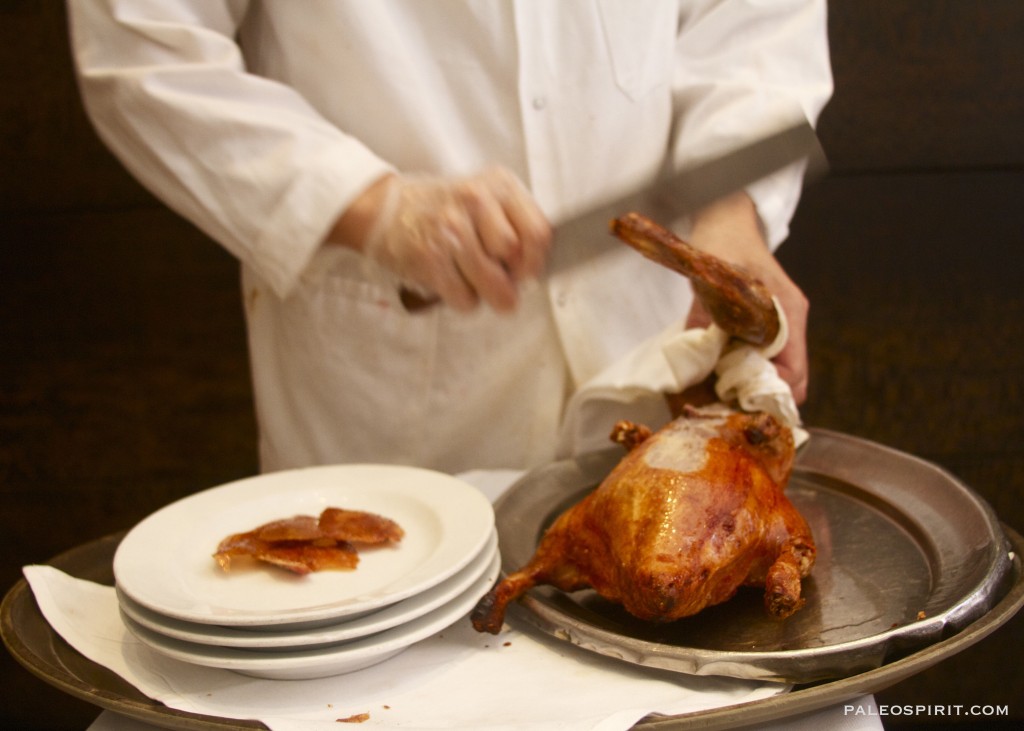 Benjamin is slightly disturbed by the action while little brother, fresh from his brave adventure with duck feet, looks on with nonchalance. 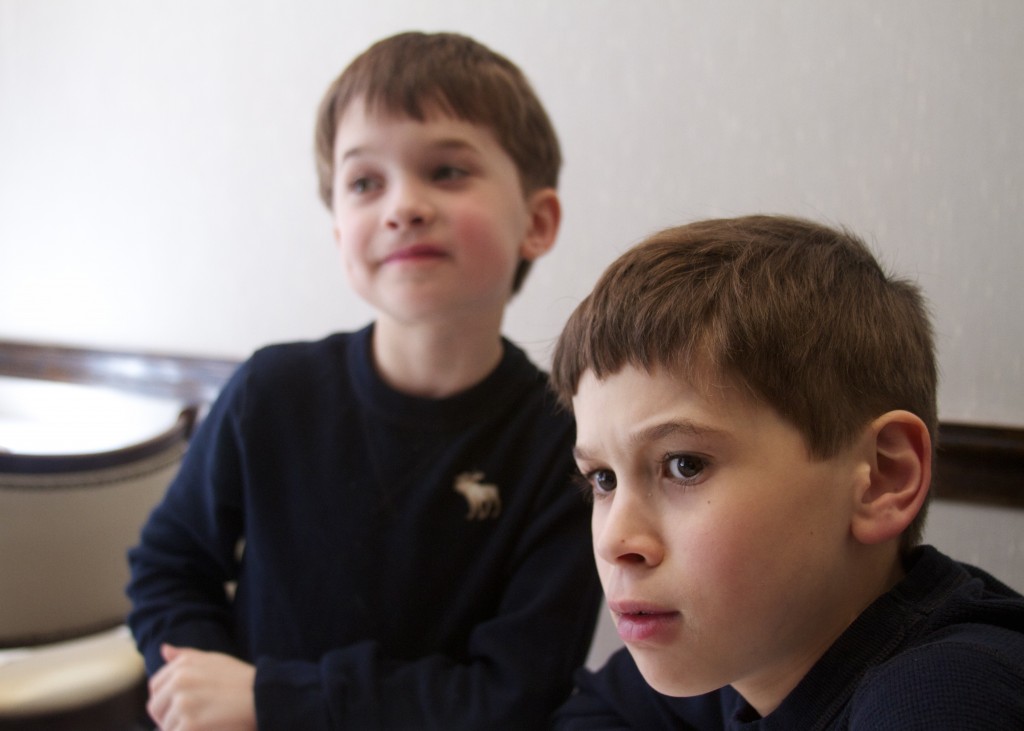 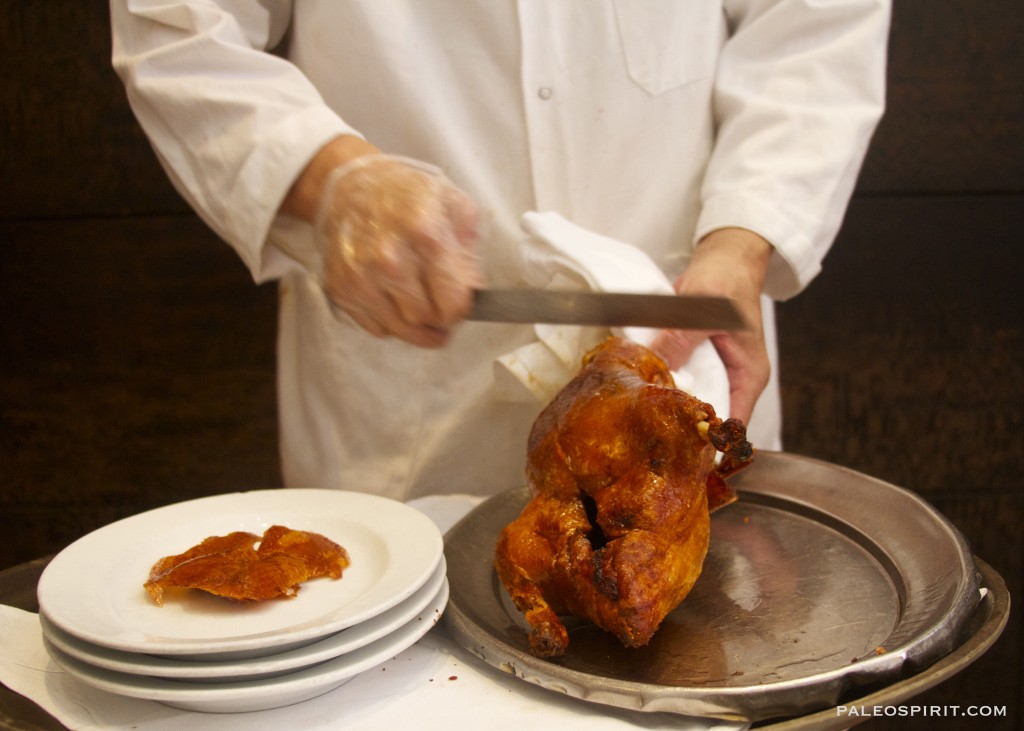 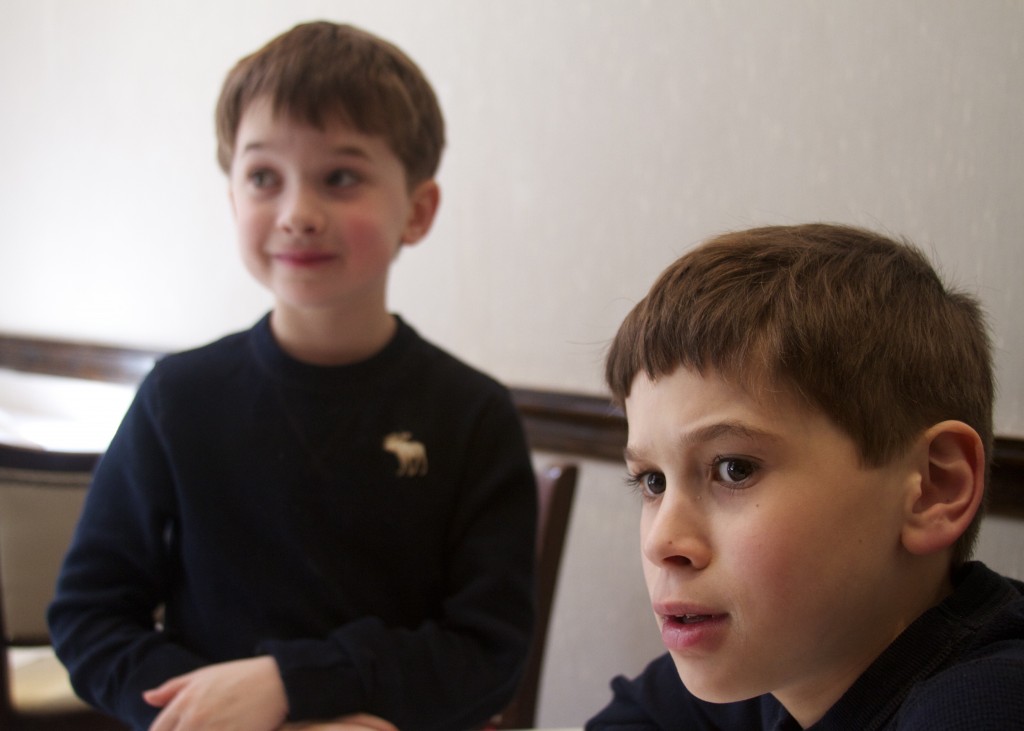 The boys look like they are getting excited as the time to dig into the Peking Duck nears. 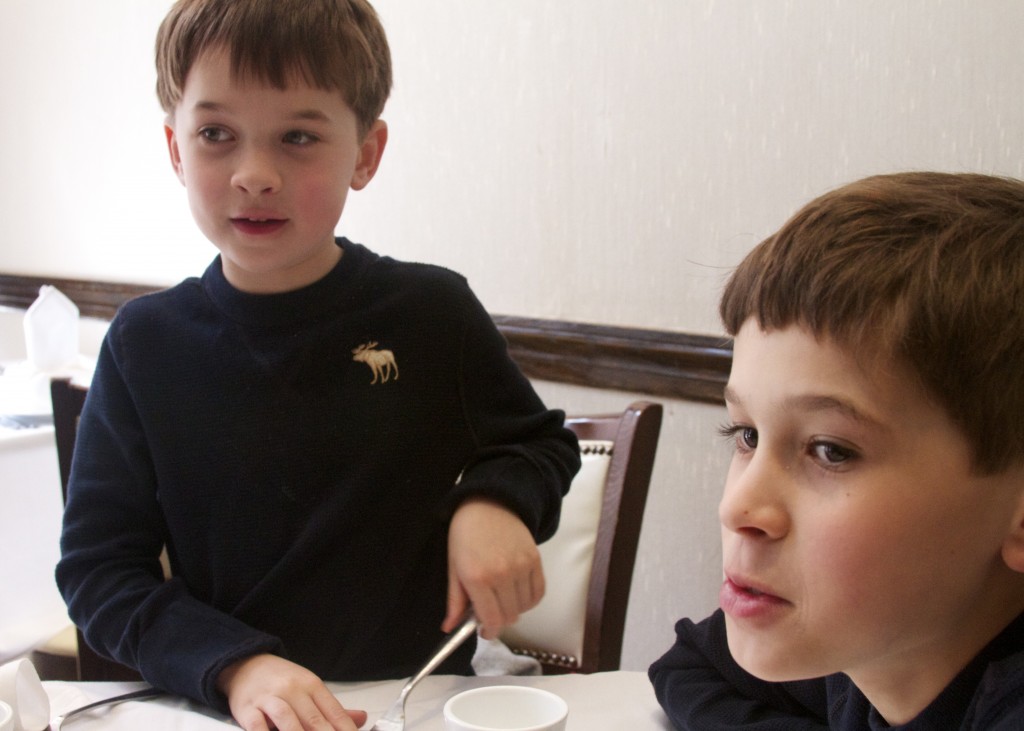 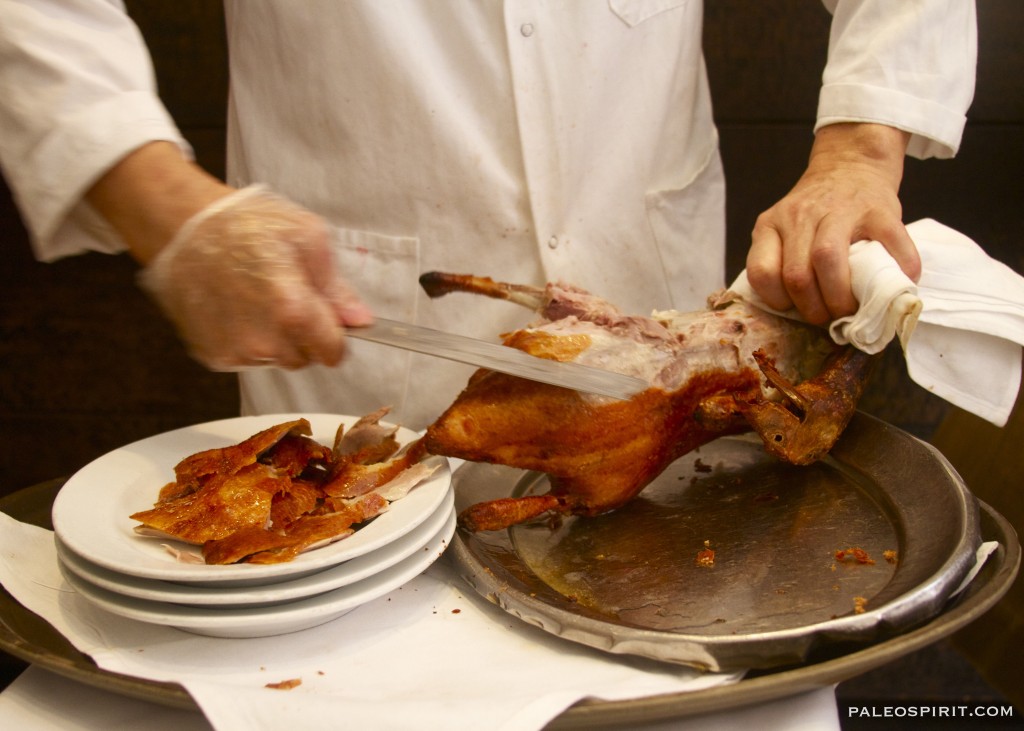 The Peking Duck is served with pancakes (which I did not eat), scallions, cucumbers and a sauce. 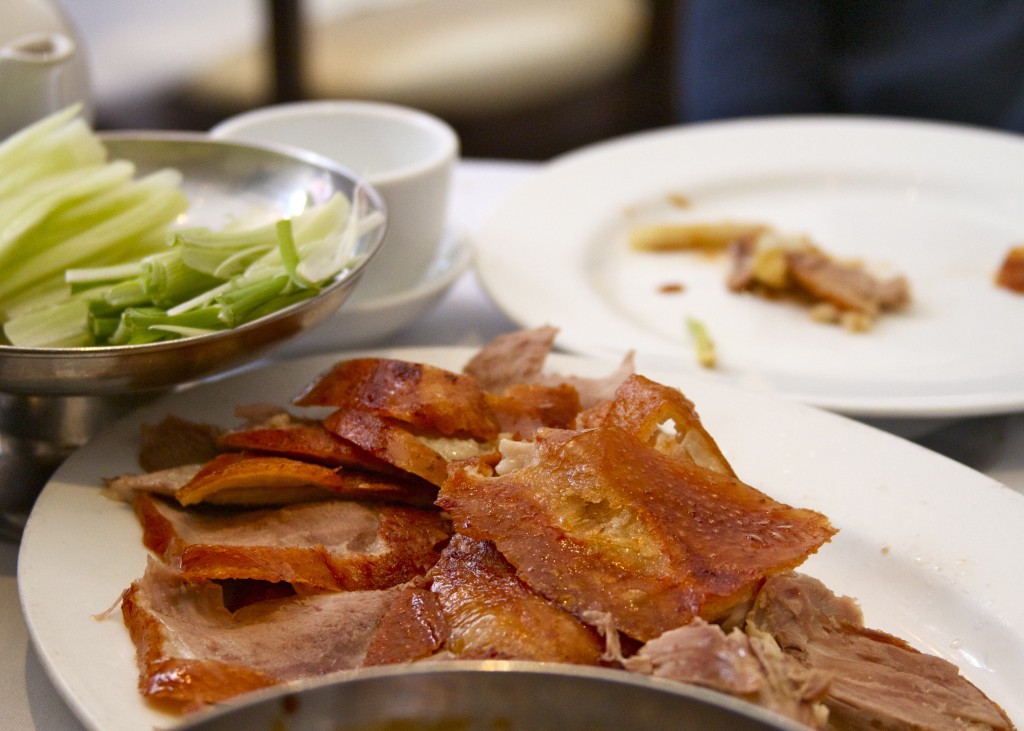 Once the chef carved the duck, the waiter assembled the first of the duck pancakes. The boys ate the wraps…. 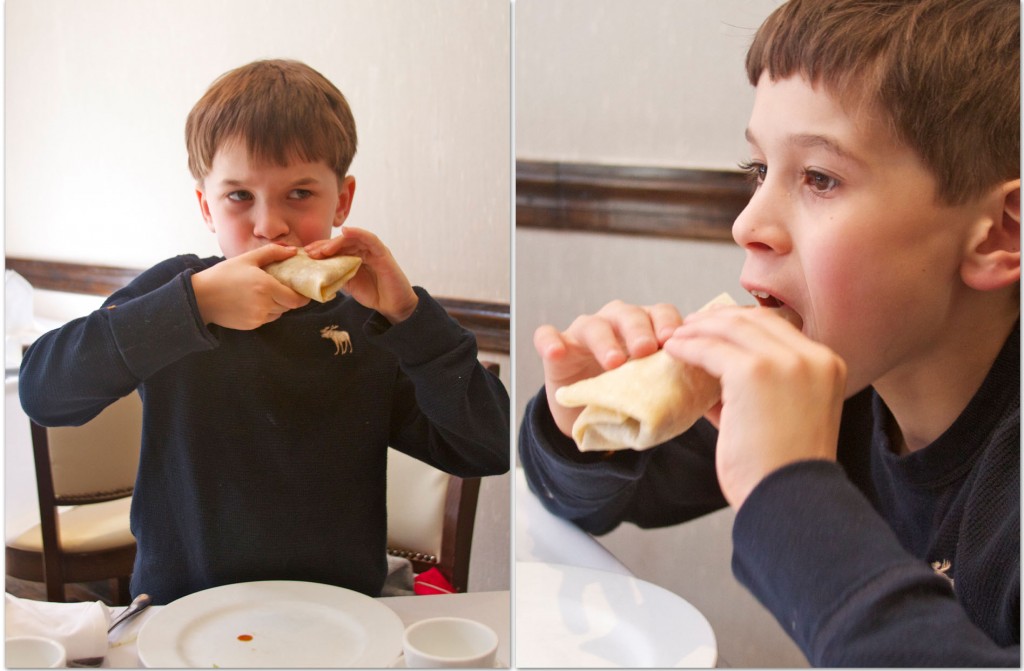 While I stuck with the Peking Duck, cucumbers, scallions and spicy cabbage. 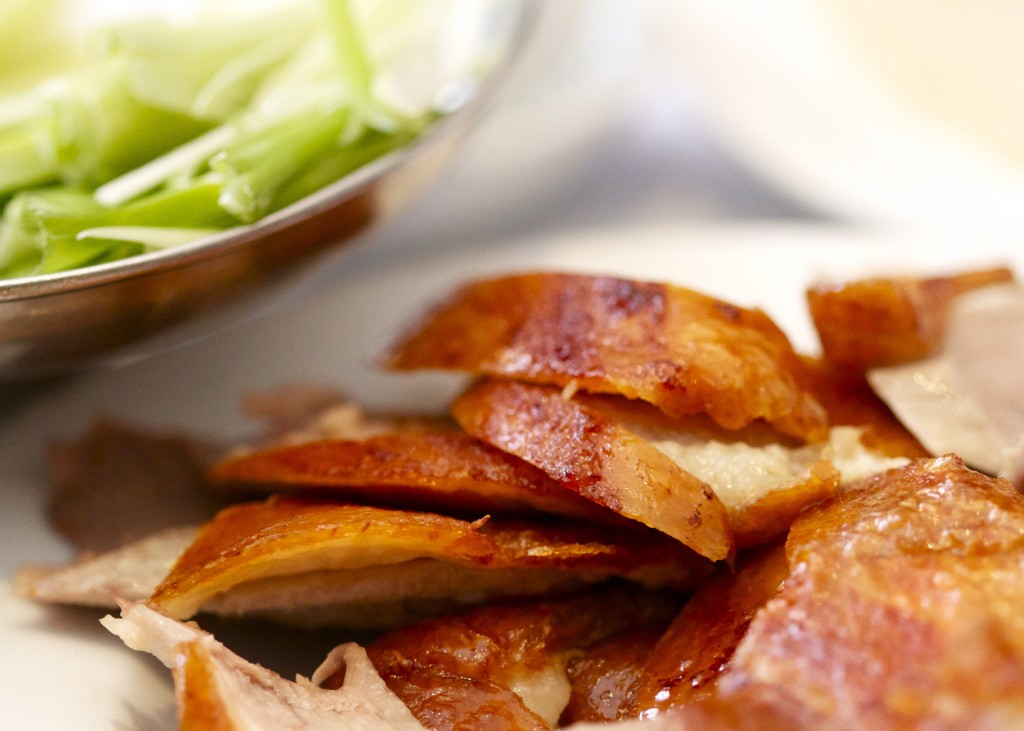 Check out another shot of the marvelous crispy duck skin. 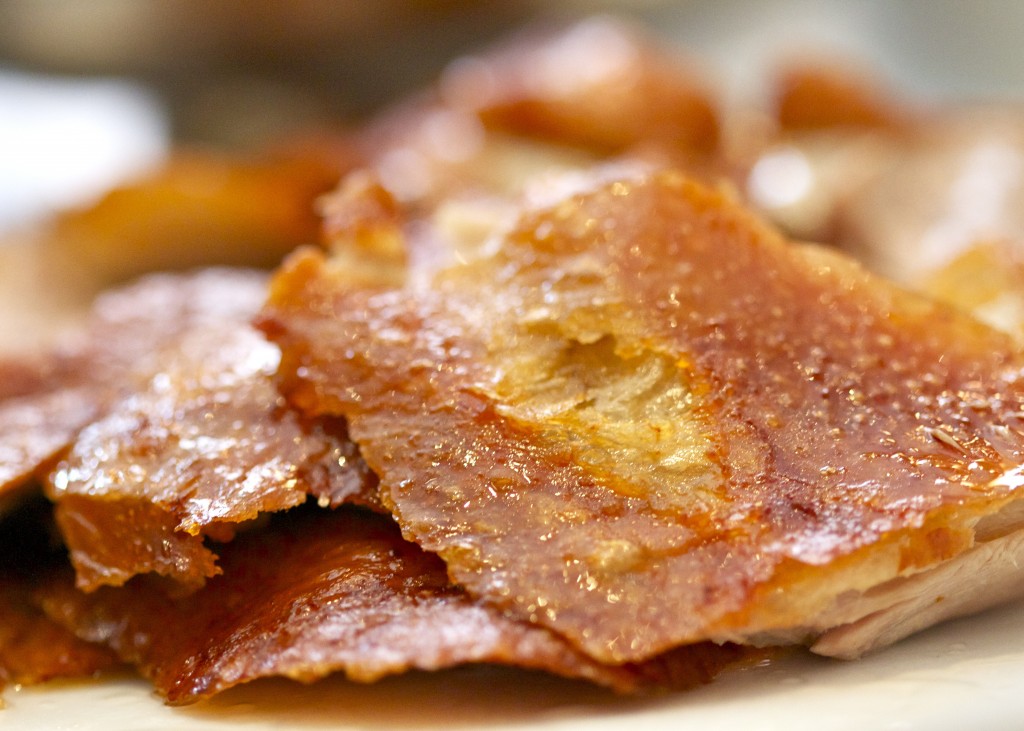 Oh, and one more just because it is so beautiful. (And because I couldn’t stop taking photos with my new macro lens given to me by G for our 15th anniversary last week!) 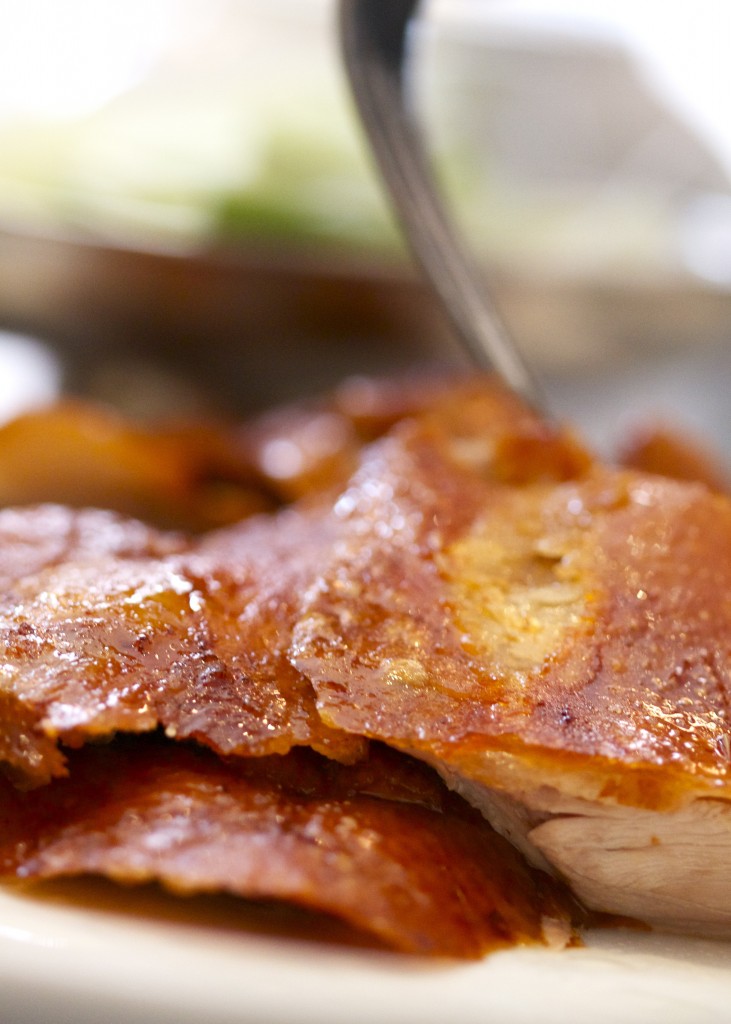 All in all, our trip to Peking Duck House was wonderful. The boneless duck feet were very INTERESTING. The spicy cabbage was a win. And the Peking Duck was delicious and made for a great dining experience. Adhering to the Paleo diet is fairly easy at Asian restaurants and Peking Duck House is no exception. While it is not a restaurant that caters to children, both my boys had a great time. We certainly had a lot of fun joking about the duck feet and reminiscing about our adventure. 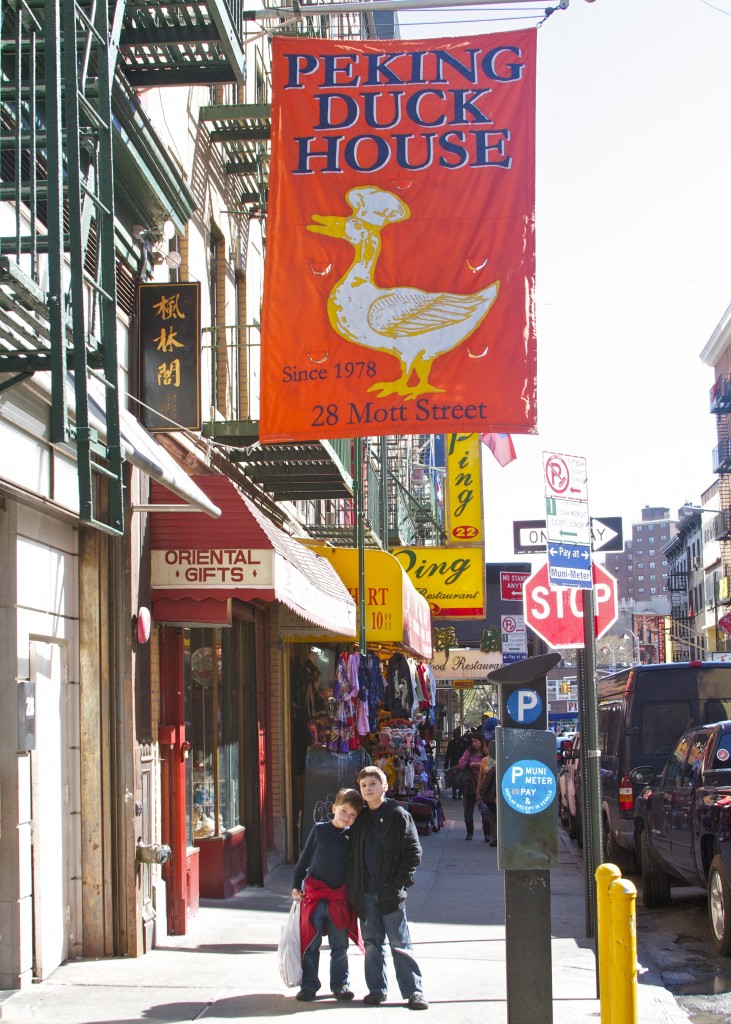 After our meal, we strolled down to a great ice cream shop that has become a tradition for us whenever we are in Chinatown. Then it was on to more adventures and dinner with G…to be continued in a future post.

*When I read about the use of maltose I was a little concerned this might be one of those annoying ingredients that is a hidden source of gluten. This could be a problem for those of us with celiac disease or anyone with a gluten sensitivity. However, when I did a little research I found that maltose is a simple sugar obtained by enzymatic breakdown of starch (potato, rice, barley or wheat). Although barley or wheat may be used in the production of maltose, the manufacturing process renders maltose gluten-free.

3 Responses to "Paleo and the City: Peking Duck House"