In addition to lectures and Mastermind panel discussions, the Paleo FX Ancestral Momentum – Theory to Practice Symposium included several movement and fitness sessions. I tried to plan my schedule so I could participate in a few movement sessions without missing too many other things of special interest. Here are some highlights from the main fitness/movements sessions I attended.

One of my main goals was to attend a MovNat session. MovNat was founded by Erwan Le Corre who has been proclaimed “one of the fittest men in the world” and a “fitness visionary” by Men’s Health magazine. 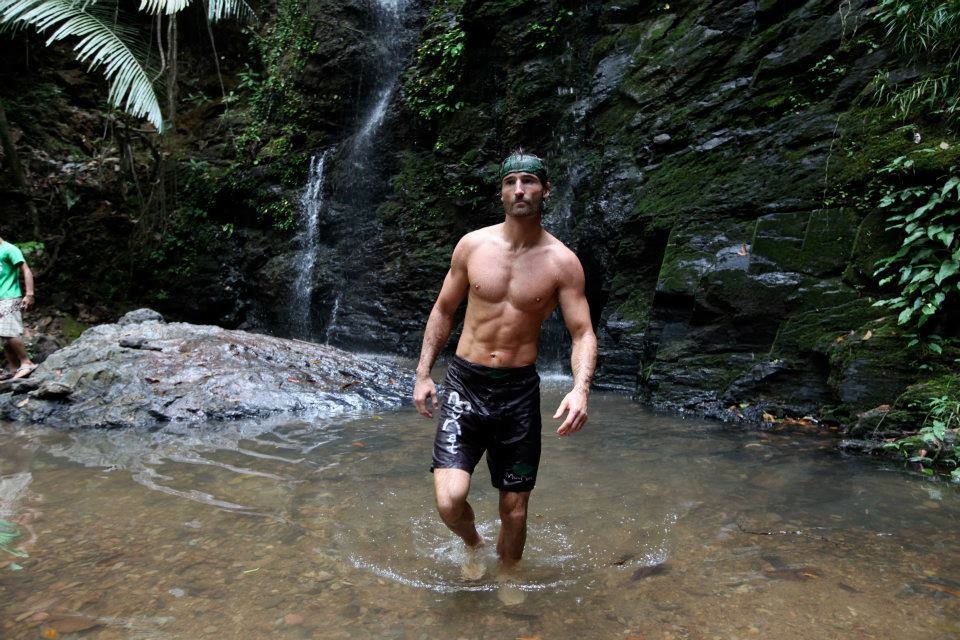 MovNat is a physical education and fitness system based entirely on using the full range of our natural, human-specific movements and is aimed at the real-world competency and conditioning that allows optimum physical and mental development.

Here’s a short video that gives some examples of a MovNat workout.

Our instructor Brian led us through some MovNat skill training. 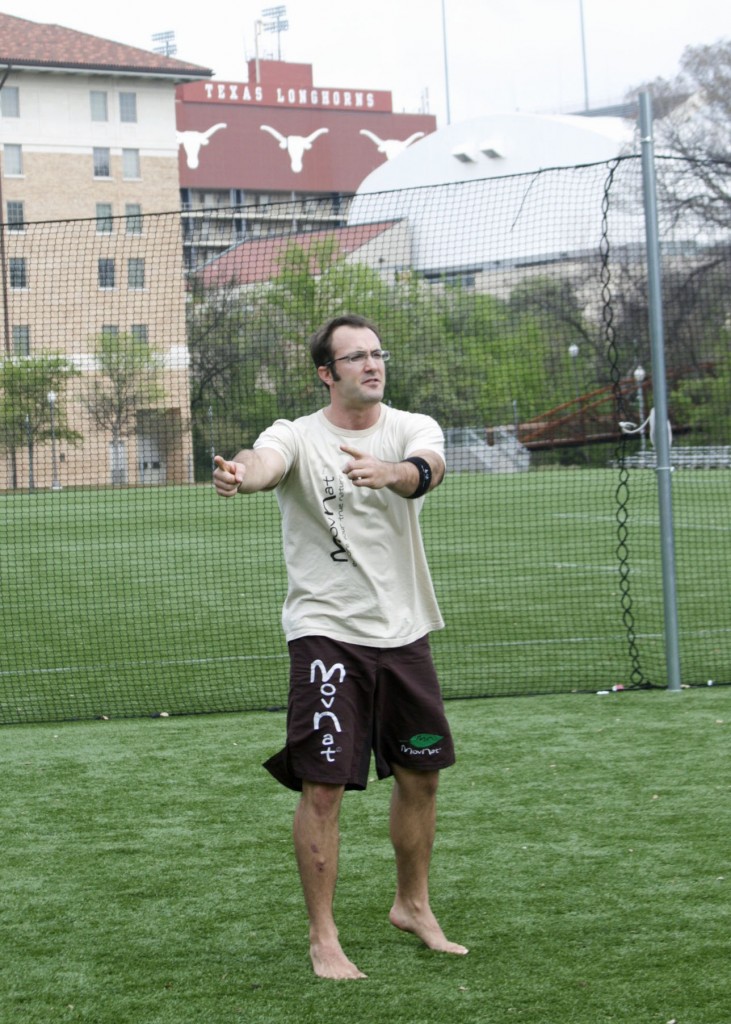 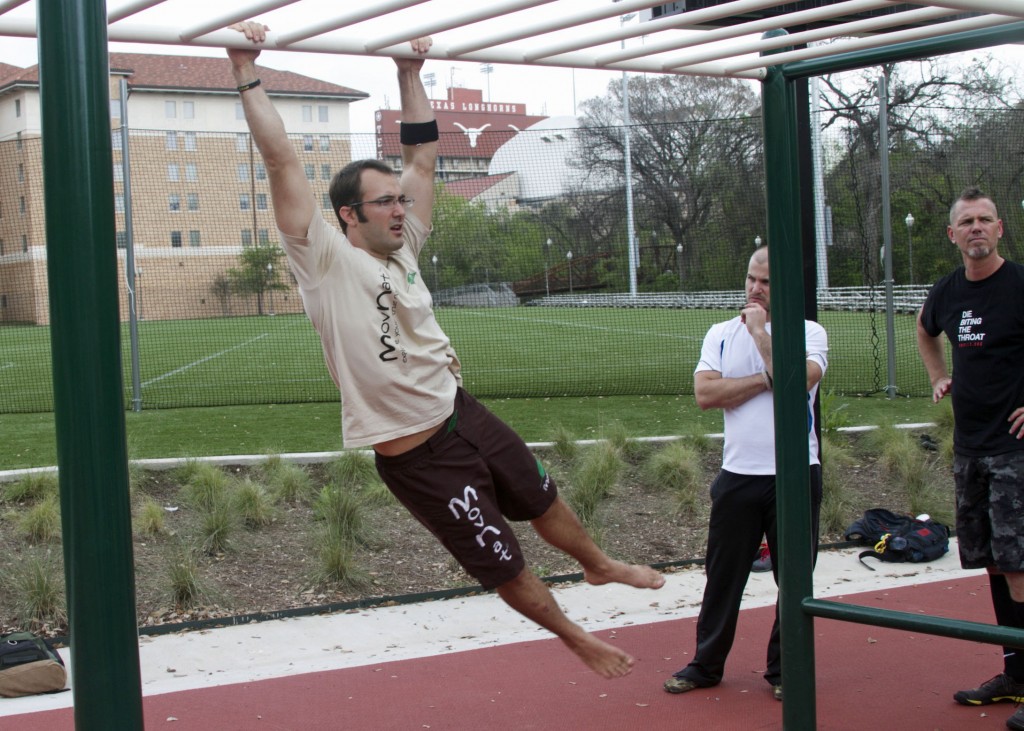 Balance is an important part of MovNat and we practiced by walking on a railing. Here’s my new friend Lina of www.lilbinthebigc.com working on her balance. 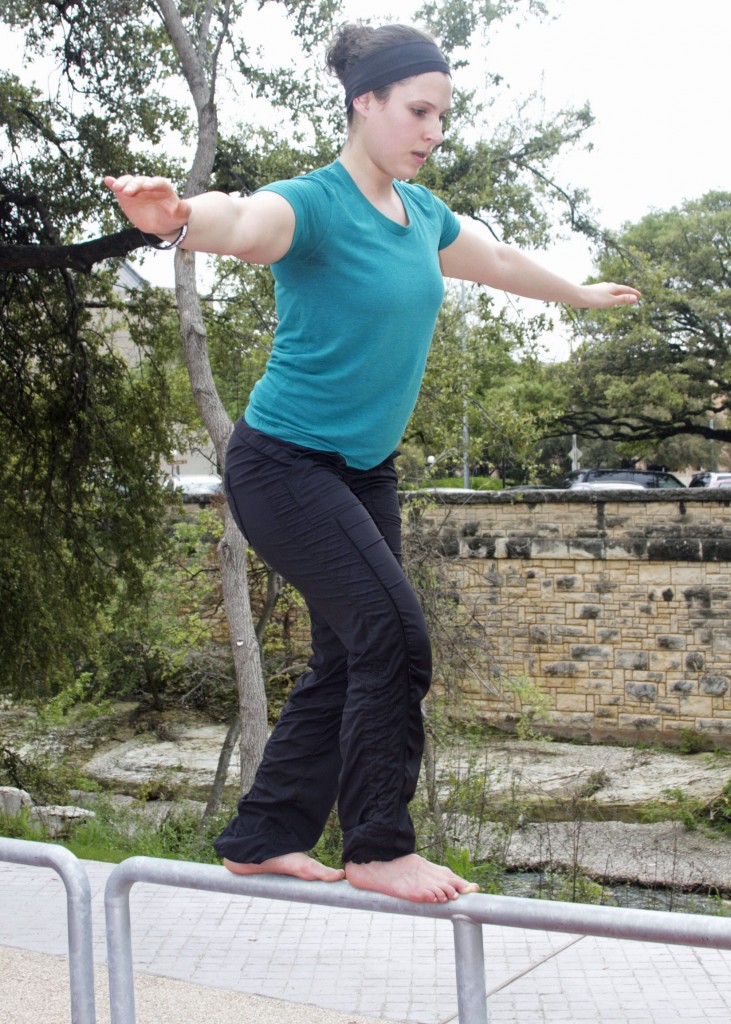 To further challenge our balance and agility we were asked to use one foot and one hand to hang on the railing while moving the other arm and leg back and forth. This was fun but quite a bit harder than it looks. 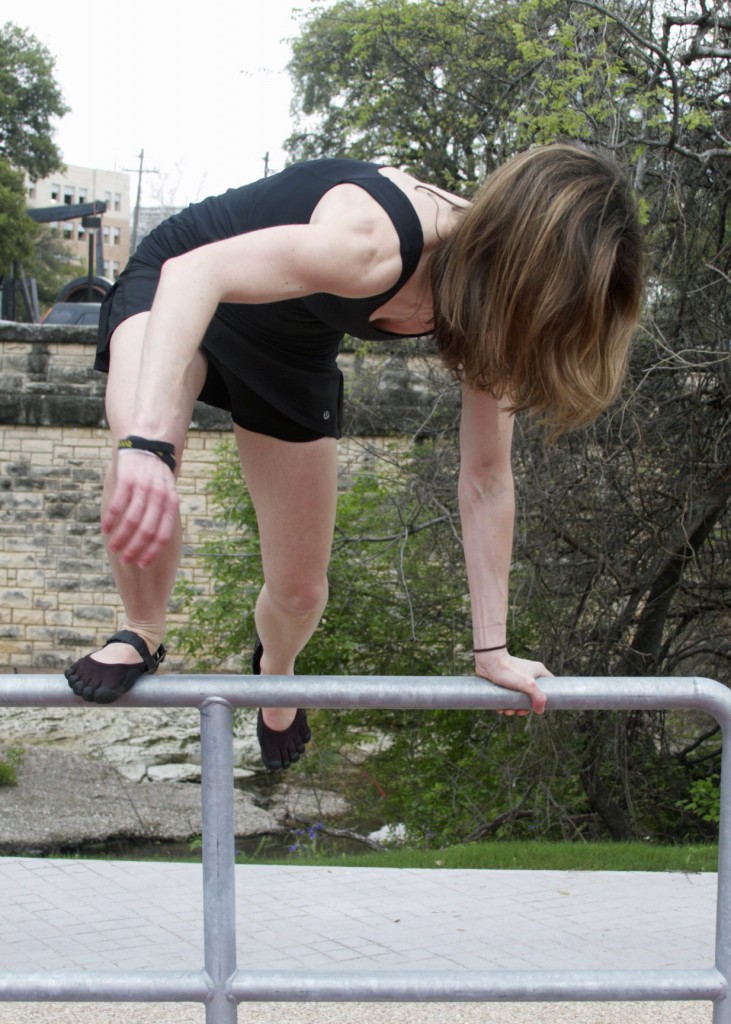 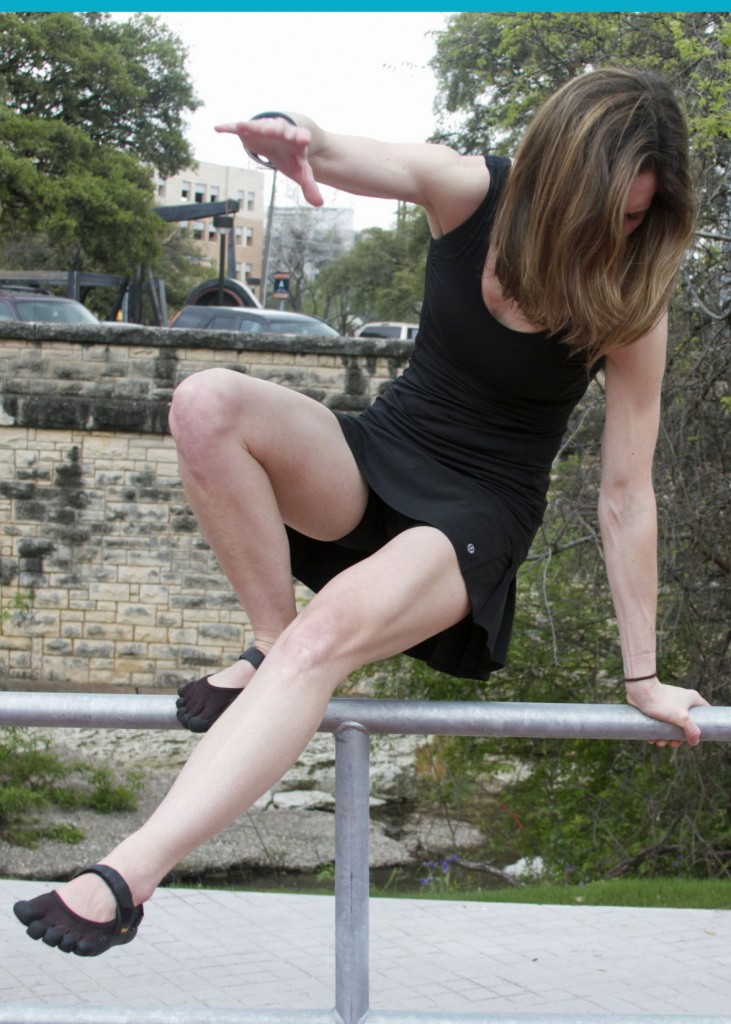 We did a lot of crawling. 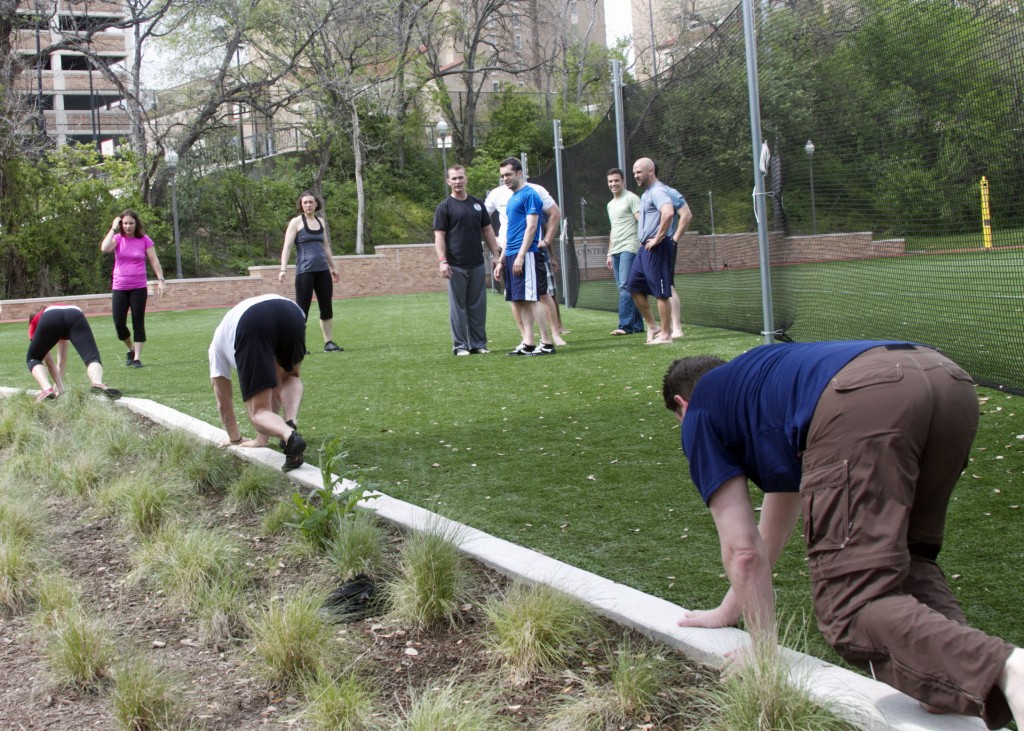 The Movnat instructors spent a decent amount of the class showing us how to perform the movements necessary to pull ourselves all the way up onto a high bar. There are three main stages of movements required to get from the ground to the full pushed-up position. I realized I am strong enough to perform the first and third stages, but lack the muscle strength for the intermediate stage. In other words, without assistance in the middle of the movement, I am not getting all the way up there. But after the MovNat session I understand the type of strength training required to fully master this particular movement.

The female instructor (whose name sadly eludes me) demonstrated a few moves on the high bar. 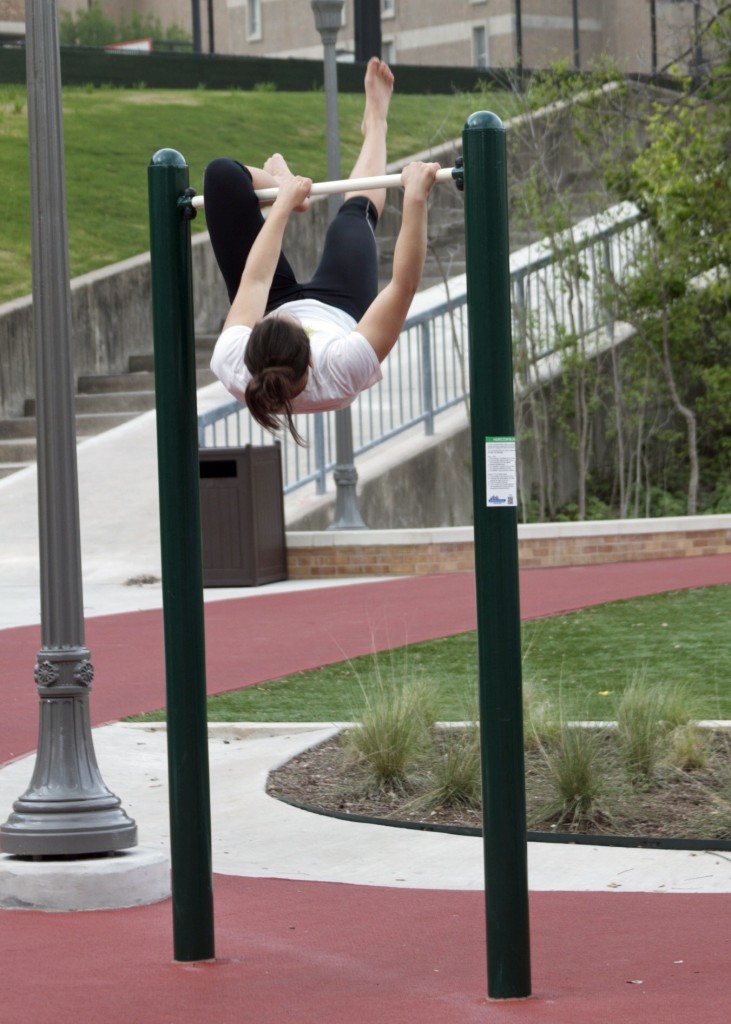 Then she had her students give it a try. This stuff is harder than it looks! 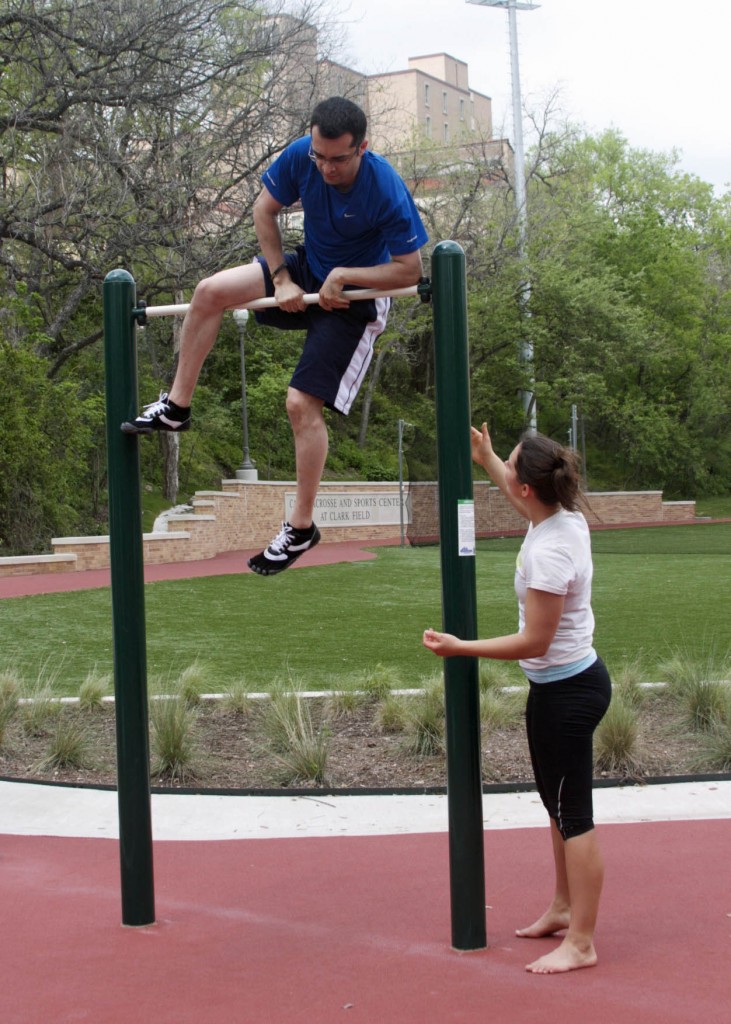 Personally, I think MovNat is terrific. After being freed from the notion that being fit requires Chronic Cardio, I have been able to explore many different aspects of fitness. MovNat is like a day at a playground you probably enjoyed as a child. It is a fitness concept that teaches how to move naturally with ease, power and grace. Having fun and gaining skills that translate into movements that are useful in everyday life is worthwhile. Having two young boys makes it even more attractive to train myself to play with them on a playground instead of being a spectator.

In addition to the MovNat session, I attended a training session dedicated to the Deadlift. The Deadlift is one of the most important and effective weight-lifting moves. But it can also be tricky to master and without proper form you can easily end up with a back injury.
The teacher for the class was Eva Twardokens. 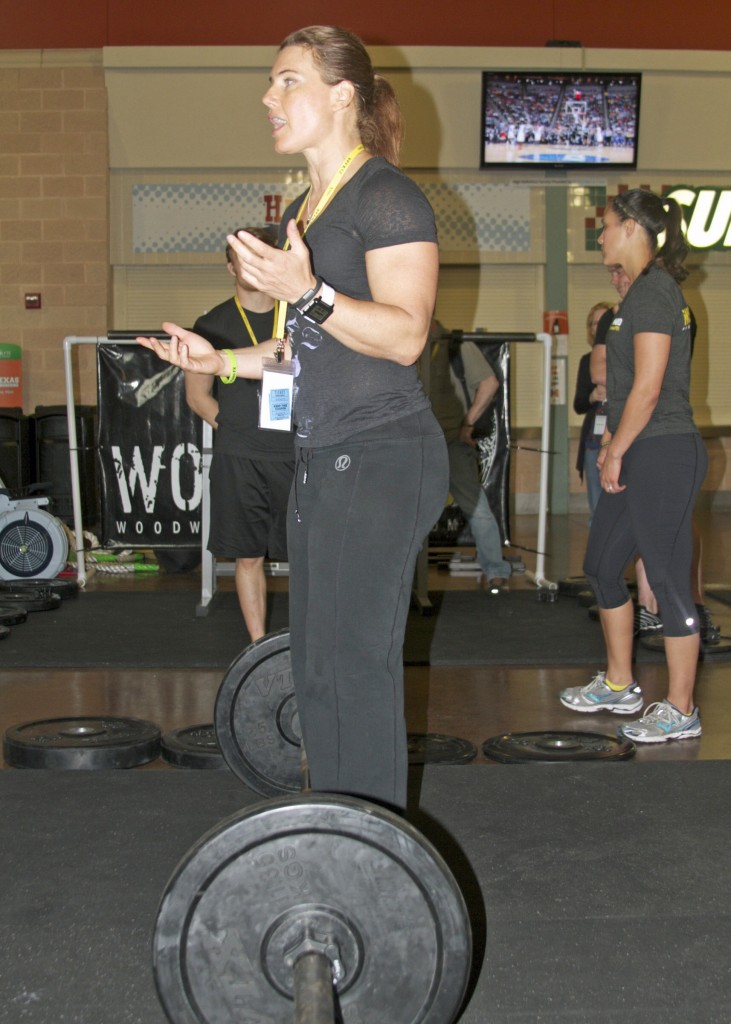 Eva is a two-time olympian in alpine skiing (Albertville and Lillehammer) and a 12 year veteran of the U.S. Ski Team. She has won six national championships, won a world championship bronze medal, and is a world technical skiing champion. Eva is also a US Ski Hall of Famer. She knows what she’s doing with a deadlift and I was pretty excited to be able to attend her workshop given that the deadlift technique is tricky. In order to reap the most benefit and avoid injury it is critical to have proper form. Here is a short video I took of Eva teaching the technique: 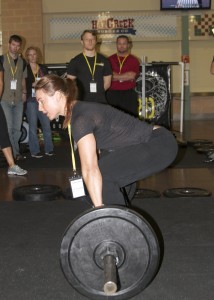 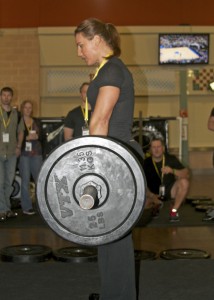 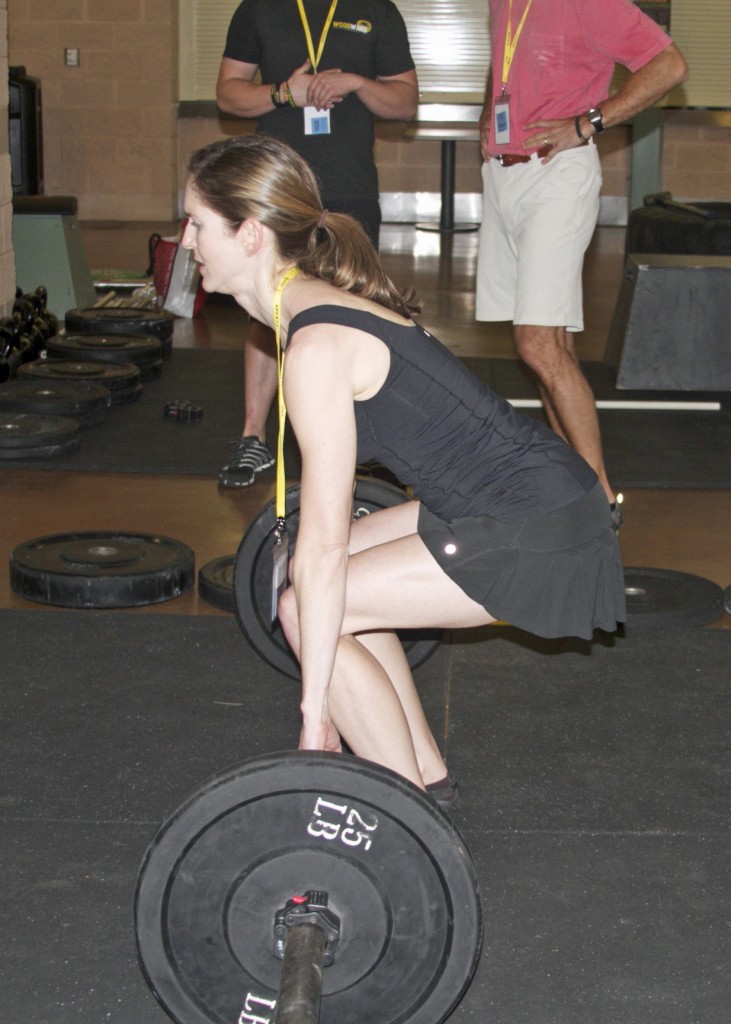 Yes, I realize my head is raised slightly but I assure you the shot was taken before I got into proper position. 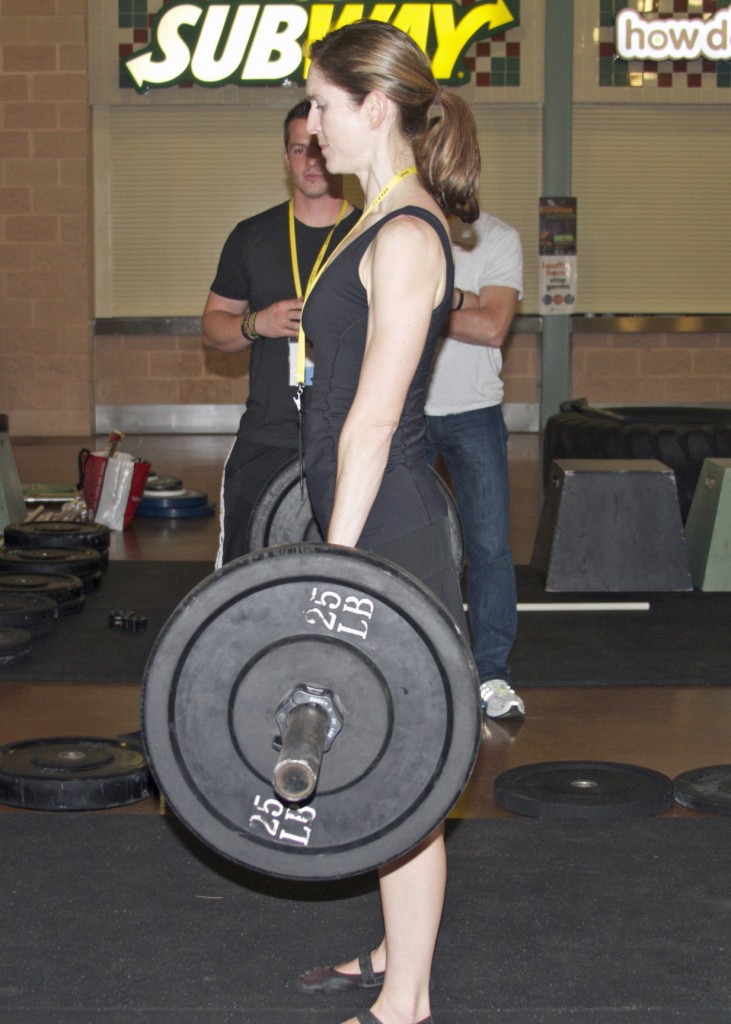 Eva did not strike me as the kind of person I would want to make angry by showing poor deadlift form. (Fortunately, the weight was only 100 pounds so it wasn’t too difficult.)

Here’s my buddy Lina showing how it is done. Notice the guys looking on in awe of her totally perfect deadlift.

On day two of Paleo FX, Lina and I also participated in the Gymnastics session with Justin Adams of Woodward Crossfit in Austin, TX. The main focus of the session was learning how to perform a handstand and a walking handstand. This is something that has been a goal of mine for a while now. I mentioned it to my husband, G, about a year ago and he laughed out loud. To his credit he did make an effort to stifle his guffaw when faced with my stare of death. But needless to say, this class was of particular interest to me and I am so glad I attended because I learned a lot. We started out learning the importance of doing a handstand against a wall to gain strength.

Here’s Justin coaching a random UT fan. (Sorry random UT guy, if I knew your name I would link to the blog you almost undoubtedly have.) 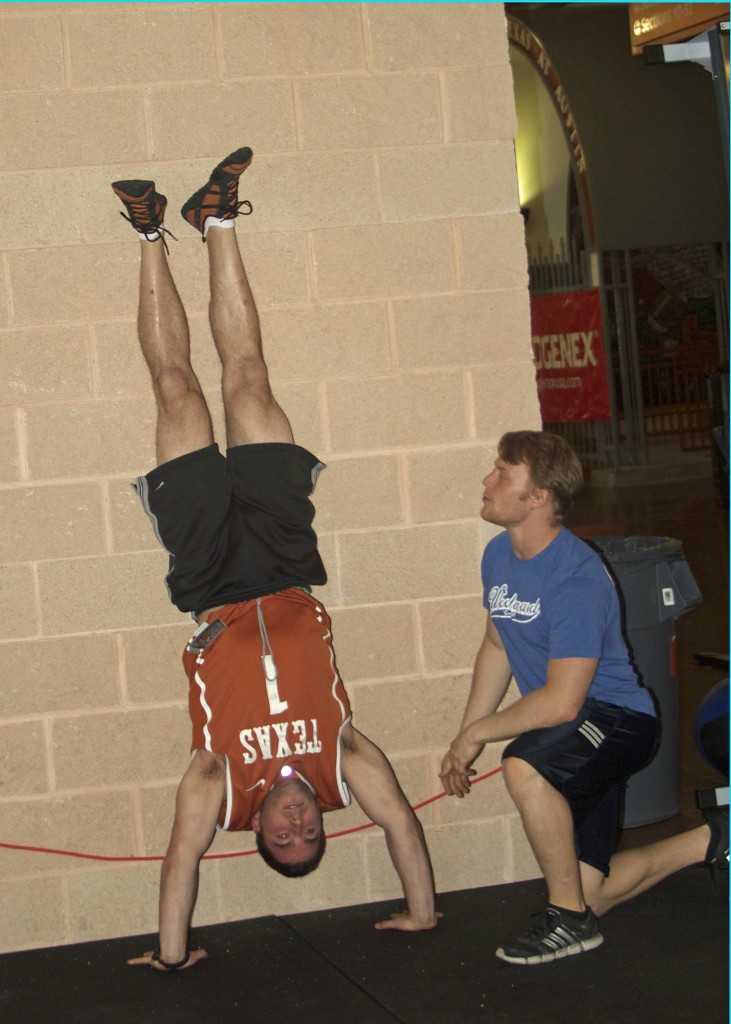 Next we had a spotter help us perform a handstand. Here’s my effort: 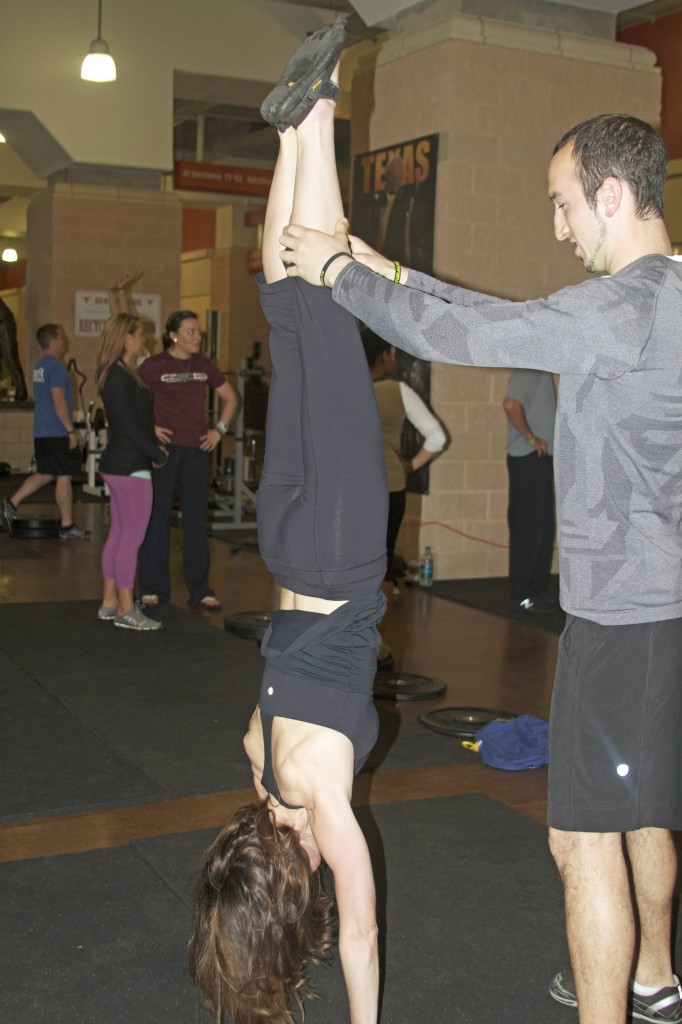 And no, he’s not holding me up by my calf.

Here’s Lina, the pro, performing a proper handstand. Lina quickly became the teacher’s pet once he realized she could not only perform a handstand but walk on her hands with relative ease. (Hey, check out Big Bertha in the background – I’m talking about the large University of Texas drum.) 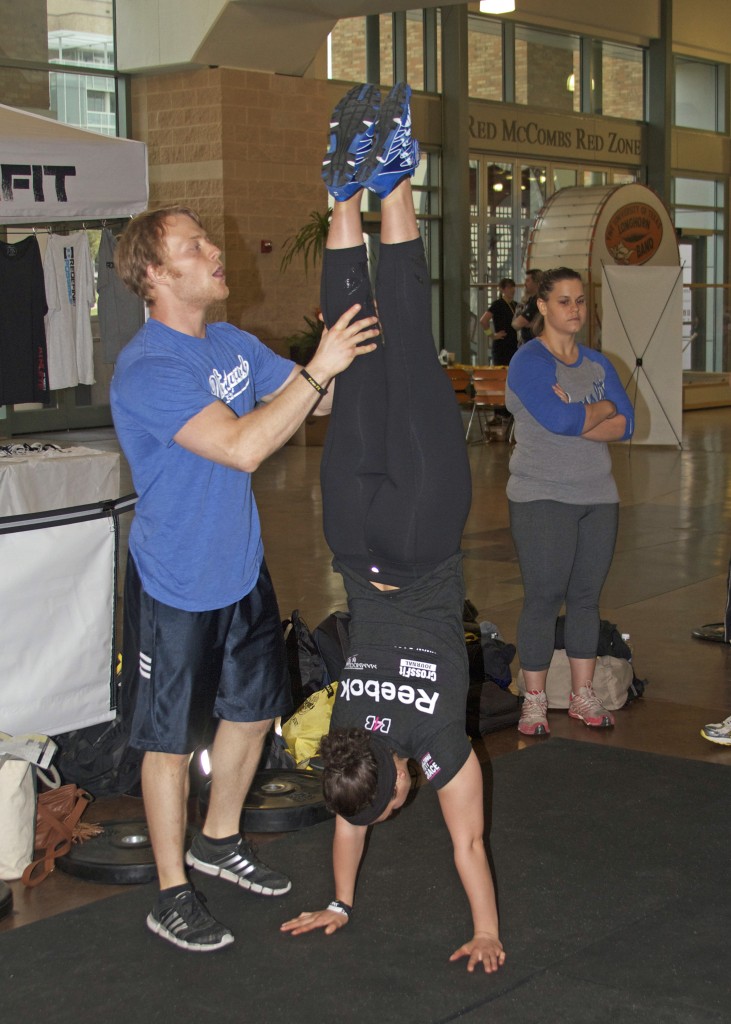 Here’s another shot of her from the pro Paleo FX photographer. I’m looking on with envy. 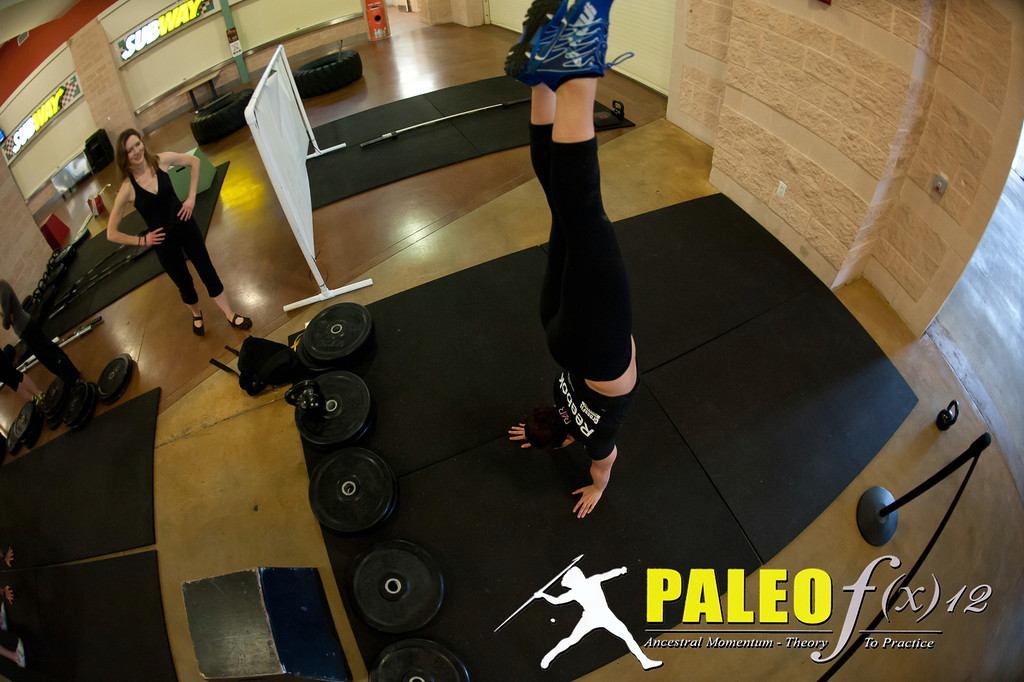 Here’s Lina walking on her hands and taking it the extra step of raising hands to shoulders with each step. She’s killing me here! 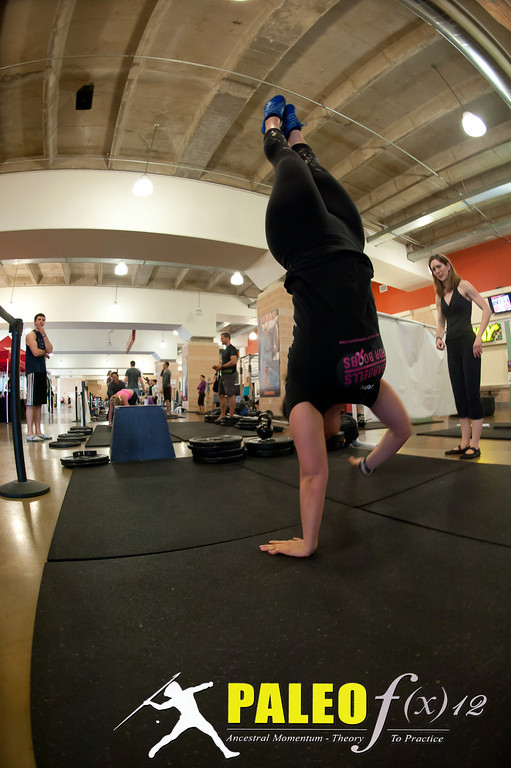 The great thing about having Lina as my partner was her ability to help me with form. By the end of the session I had taken a couple of handstand steps before tumbling over (gracefully, of course). But I will definitely need more practice before mastering the walking handstand. The good news is I found out strength is not the problem. I am plenty strong enough to do it, I just needed proper training on the HOW. A walking handstand is much less about using your arms to move yourself along the ground as it is a movement counteracting a fall forward. I definitely need to work on the balancing aspects of the walking handstand. But I’m hopeful that it will not be too long before I can show off to G that he was TOTALLY WRONG to laugh at my goal!

There were several other fitness and movement sessions available at Paleo FX that I was unable to attend. For example, I would like to have tried Ki-Hara Stretching which is a type of resistance stretching. There was also a session on Oly lifts – specifically Snatch variations. Here’s another new friend, Sara (red socks!), who found time to attend that particular session: 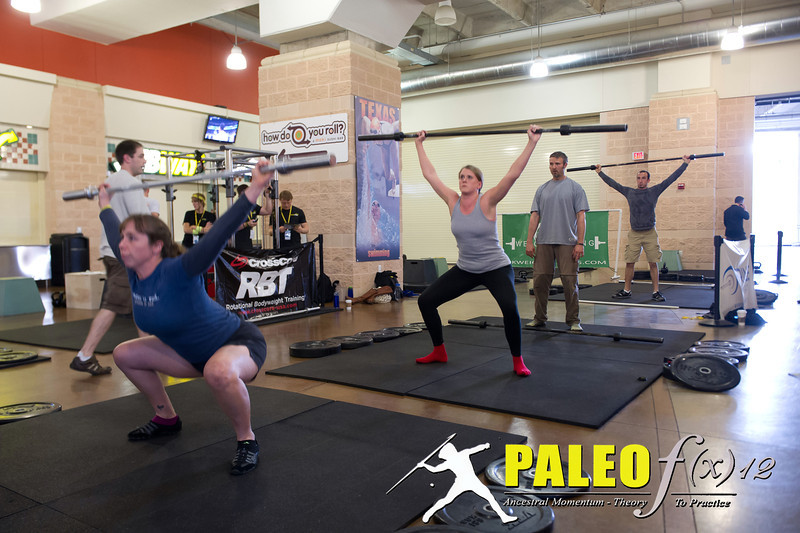 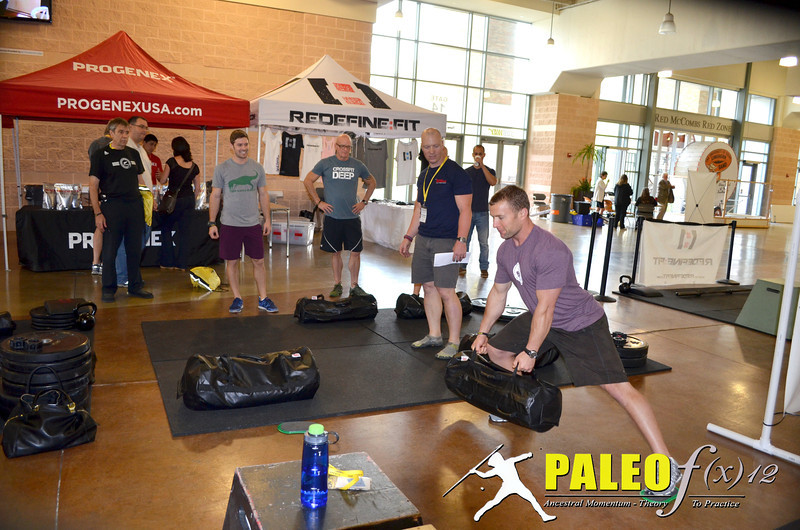 There were even more fitness sessions that I won’t list specifically here. But suffice it to say there were plenty of options at Paleo FX. I am already looking forward to next year where I hope to learn even more about exercise and fitness.