A Rutabaga By Any Other Name…is Still a Rutabaga 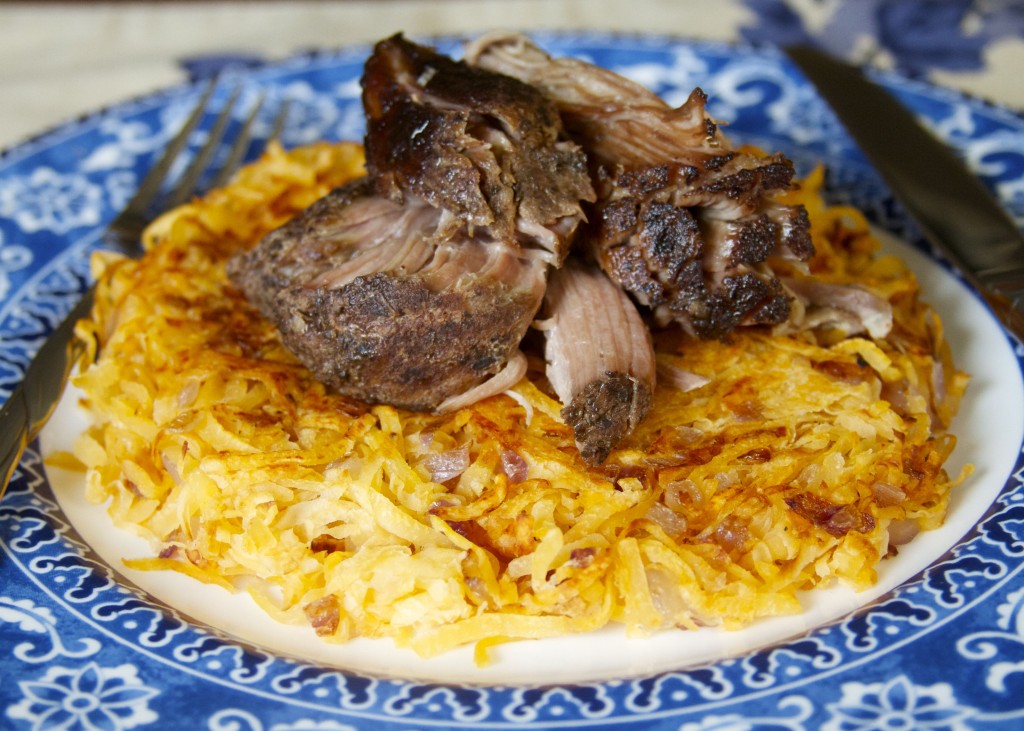 The “Turnip Hash Browns” were so good I went to the grocery store again (a different one) searching for another turnip. The one I found looked similar – slightly larger and more yellow – and the sticker said “Rutabaga”. Having eaten both turnips and rutabagas, I knew rutabagas are typically more yellow than turnips. So the darker color of this one made sense to me. When I continued to look for turnips I only found some smallish, bright white and purple turnips that were not waxed. So I went ahead and bought the rutabaga thinking I could easily make the same hash browns recipe with it. Once it was shredded I noticed, even though it was slightly more yellow than what I thought was a turnip, it tasted EXACTLY the same. So I posed the question on the Paleo Spirit Facebook Page and was met with a link to an article called “Turnip or Rutabaga?” In spite of having Googled the question myself, this particular post mentioned that rutabagas are sometimes called “Waxed Turnips”. That answered my question. What I thought was a turnip was actually a rutabaga (also known as “Swedish Turnip”, “Swede”, “Yellow Turnip” and other terms.) Egads!

So I will now go back and change the name of the other recipe to “Rutabaga Hash Browns with Pulled Pork”. I’m sure the recipe will work just fine with a turnip. But the recipe post contains photos of rutabaga.

In the process of looking into this earth-shattering question I came across a website that has some great nutrition information: Self Nutrition Data. I went ahead and looked up some basic nutrition facts for three vegetables: white potatoes, turnips and rutabagas. Here’s what I found:

*Glycemic load is a way of expressing a food or meal’s effect on blood-sugar levels. Experts vary on their recommendations for what your total glycemic load should be each day. A typical target for total Estimated Glycemic Load is 100 or less per day. If you have diabetes or metabolic syndrome, you might want to aim a little lower. If you are not overweight and are physically active, a little higher is acceptable.

** The IF (Inflammation Factor) Rating™ estimates the inflammatory or anti-inflammatory potential of individual foods or combinations of foods by calculating the net effect of different nutritional factors, such as fatty acids, antioxidants, and glycemic impact. How to interpret the values: Foods with positive IF Ratings are considered anti-inflammatory, and those with negative IF Ratings are considered inflammatory. The higher the number, the stronger the effect. The goal is to balance negative foods with positive foods so that the combined rating for all foods eaten in a single day is positive.

It is not too surprising to learn that turnips and rutabagas are lower in calories and carbohydrates than white potatoes. But the information on the inflammatory impact was especially interesting. Basically, the white potato is a fairly inflammatory food. It is a member of the nightshade family of plants which can aggravate auto-immune diseases in some people. Turnips or rutabagas are much better choices than potatoes in terms of calories, carbs and inflammation impact.

Have you ever confused turnips and rutabagas? Please, let me know if I am not all alone in my produce aisle confusion.

You’ll have to excuse me now while I go fry up some RUTABAGA Hash Browns in pastured ghee!