Since this is the first week of summer vacation we started what I originally referred to as “Mommy Summer School.”  It became apparent the word “school” was a major stumbling block so we decided to call it “camp” instead. When I asked the boys to come up with a camp name they first threw out the idea of calling it “Camp Zombie Bob”.  I’m not sure where that came from!  But, while “Camp Zombie Bob” has a certain ring to it, we ultimately decided to call our summer experiment, “Camp Paleo Spirit”. Naturally!

Camp Paleo Spirit campers (all two of them) will take part in the following activities:

Art and crafts such as: Origami, sculpting, painting and drawing 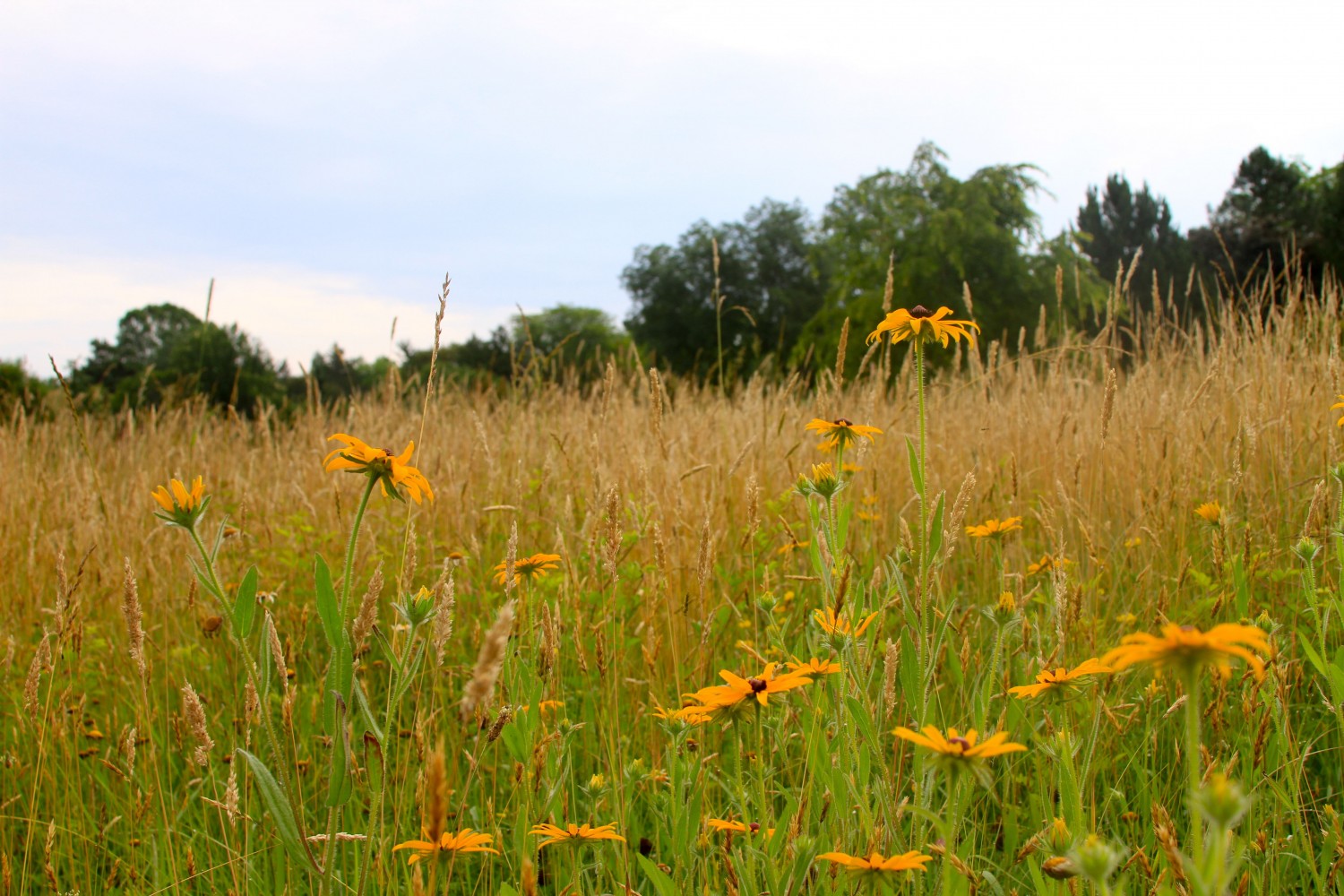 On day one we had our usual Paleo breakfast (scrambled eggs and berries) and got ready for the day. The nice weather dictated that our morning would primarily be out of doors. We set off, cameras in hand, to Willowwood Arboretum.

The iPad came in handy for a few things on this jaunt. First of all, we sat down at a picnic table and had a short Bible study and prayer time using the Holy Bible You Version App. We started with the Josh McDowell Youth Devotional and read from Judges 17:1-6.

“In those days there was no king in Israel; every man did what was right in his own eyes”. Judges 17:6

We discussed how certain philosophers, Nietzsche and Machiavelli for instance, have espoused the notion there is no such thing as right or wrong. The logical fallacy becomes evident when the indignation and outrage we feel when someone trespasses against us is pointed out. The idea of no moral absolutes, when taken to its logical conclusion, leads to a very terrible world in which to live. Small wonder that Nietzsche and Machiavelli had tremendous influence on Adolph Hitler. My young boys were able to understand this basic concept and we prayed that God would help us do what is right in His eyes, not our own. 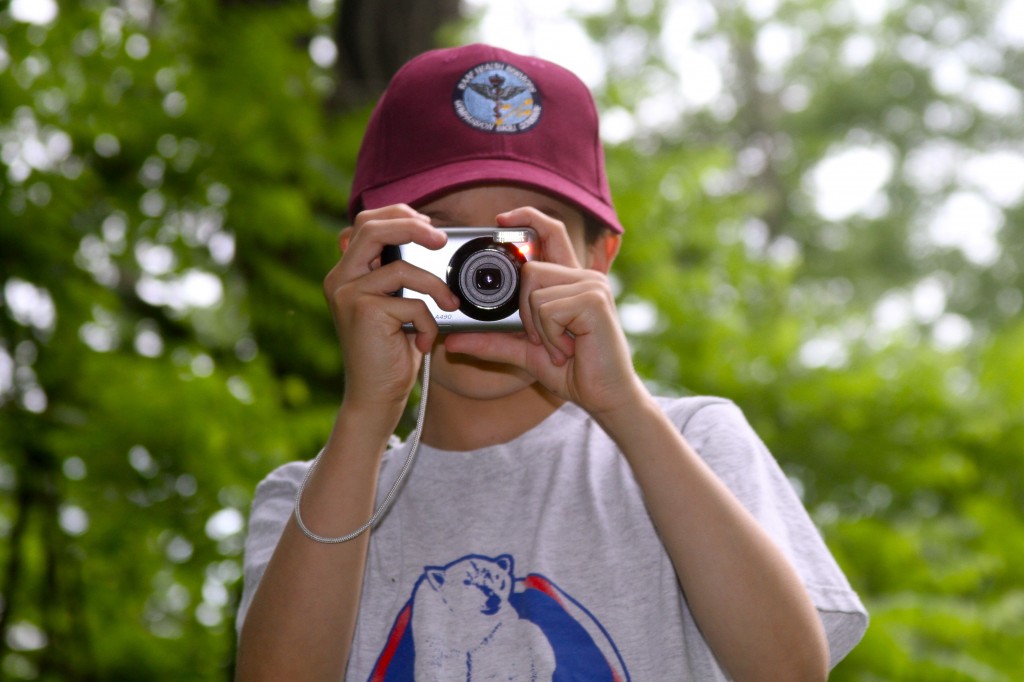 B practices his photography skills

After our devotional we started our hike to a brook, stopping along the way to take some photos of flowers.  Photography is an important part of Camp Paleo Spirit and the boys are eager to learn more about using their cameras. 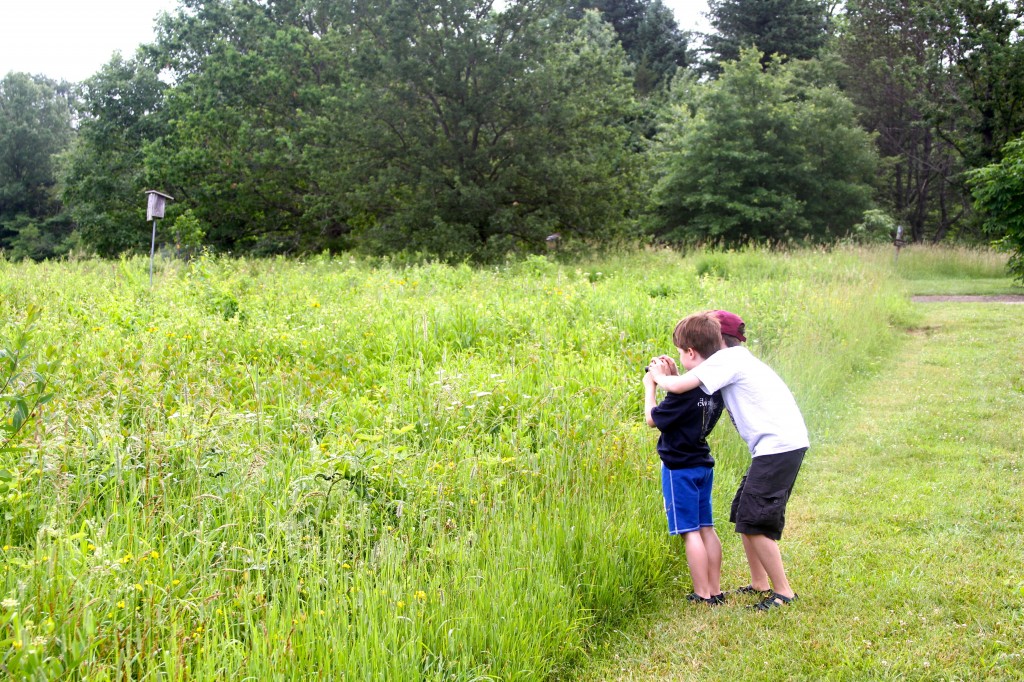 Let me help you

Mr. B enjoyed helping Mr. N in getting just the right shot.

Once we reached the brook we took a little break and broke out the iPad again to read some poetry in the gorgeous setting. I used the American Poetry App and searched for the word “brook” in the content. The poem that seemed to best fit the moment was “Have You Got A Brook In Your Little Heart” by Emily Dickinson.

“Have you got a Brook in your little heart,
Where bashful flowers blow,
And blushing birds go down to drink,
And shadows tremble so —

And nobody knows, so still it flows,
That any brook is there,
And yet your little draught of life
Is daily drunken there —

Why, look out for the little brook in March,
When the rivers overflow,
And the snows come hurrying from the fills,
And the bridges often go —

And later, in August it may be —
When the meadows parching lie,
Beware, lest this little brook of life,
Some burning noon go dry!”

We took some photos of “bashful flowers” and walked a bit more around the brook listening to birds. 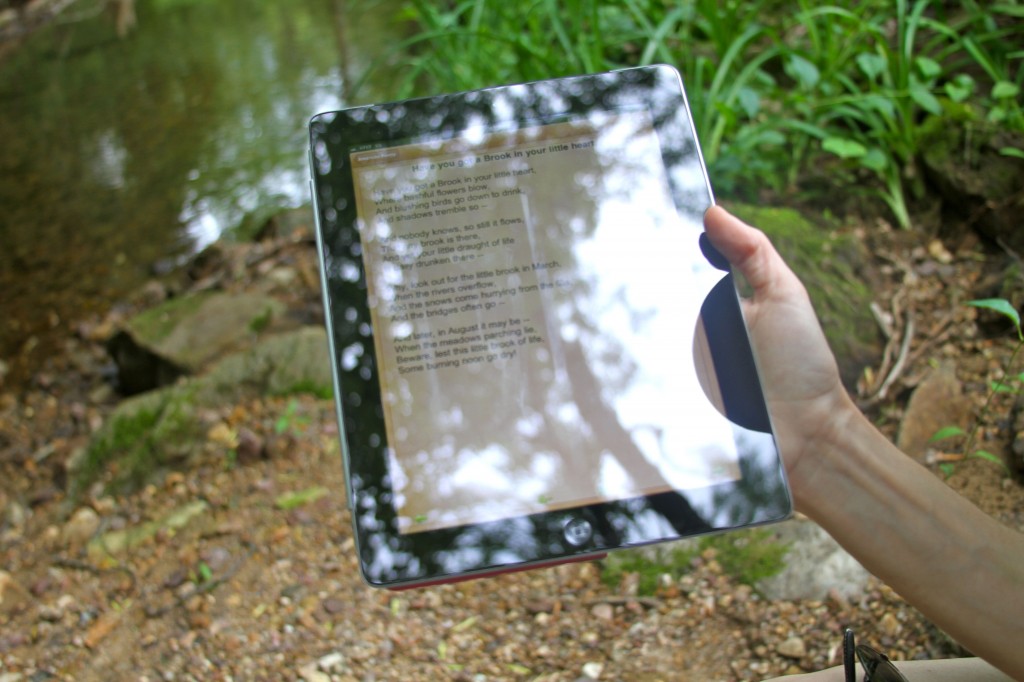 Once again, the iPad came in handy – this time in helping to identify bird species. We used iBird Explorer Pro App and used the search feature to narrow it down to a few birds. The Veery came up as a possibility and when we played the bird sound on the App we verified it was definitely Veery Thrushes we were seeing and hearing. The iPad is loud enough that the birds seemed to hear the sounds and started responding to us in song. Every time we played the Veery call, the Veery near us answered back! It was absolutely amazing! The boys ended up learning a new bird species both by sight and by sound.

Check out this short video of a close up of a Veery Thrush making his call.  It’s one of most beautiful of all the bird calls and made the walk about Bamboo Brook all the more magical.

We found a toad!

At one point we found a toad and the boys felt the need to pick him up and play with him a little.  It was such a “boy” thing but I’ll admit I thought it was pretty fun. 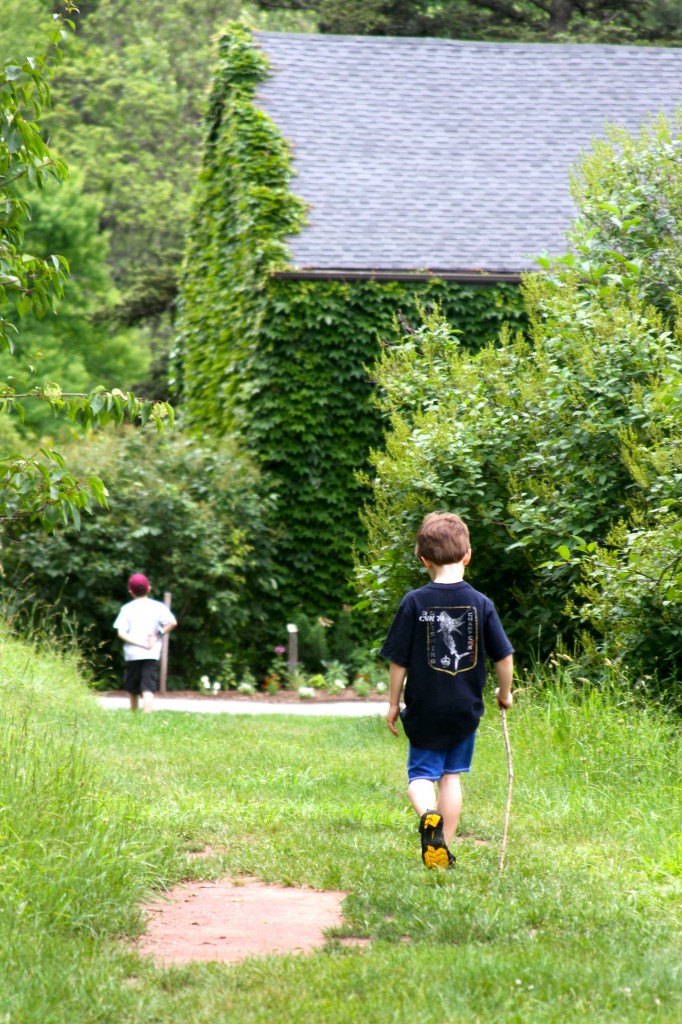 Hiking back to Willowwood Arboretum

Once we made our way back to the Arboretum we took a tour of the grounds and Mr. N practiced his photography skills using my Canon EOS 7D. 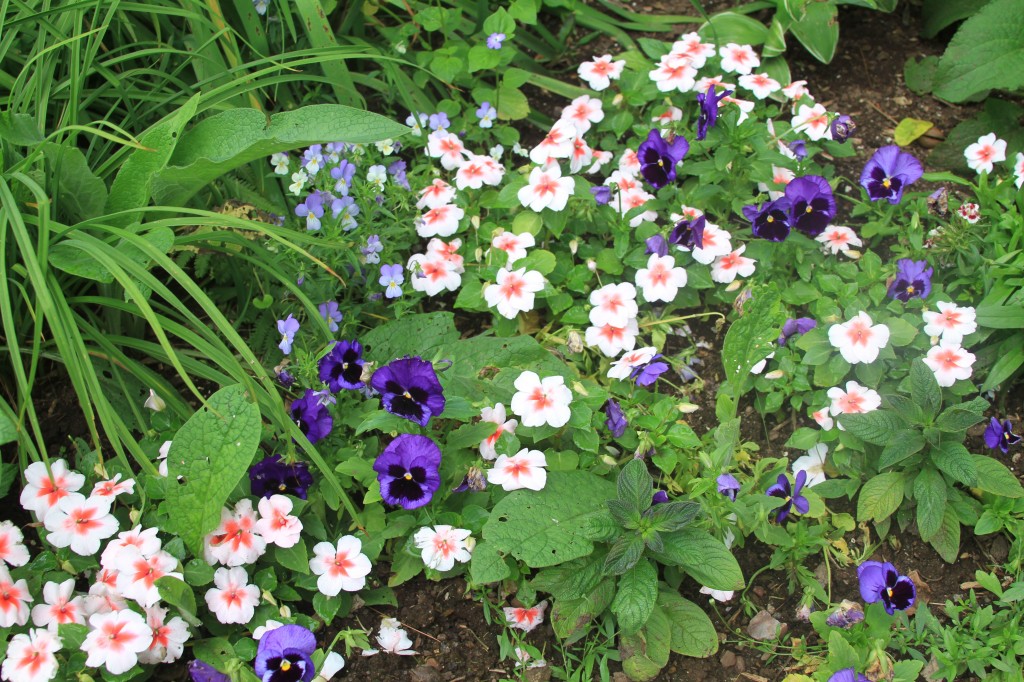 N takes a shot of flowers

Admittedly, the camera is a bit large and heavy for a 6 year old but he actually managed to take a few good pictures.

Later in the day we spent time learning the Italian words for the various colors and practiced them while we played in the back yard.   In future posts I’ll show some of the other activities we managed to cram into Day 1.  I tried to intersperse the “learning” aspects of “camp” with other fun things the boys like to do such as playing Yu-Gi-Oh cards, swimming with friends and just lounging around the back yard.  All in all, day one was a success.  We’ll see if we can keep up the enthusiasm for the rest of the summer…or at least the rest of this week.