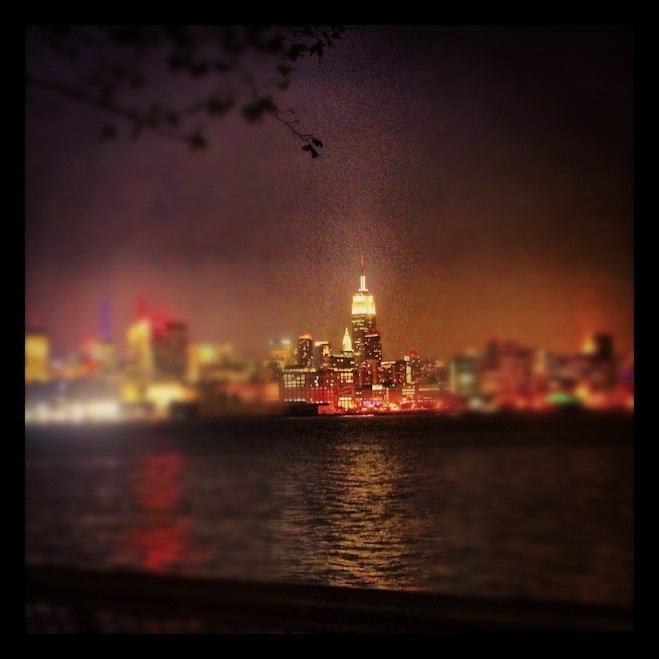 Paleo dining in New York City is possible. Some of the restaurants that make paleo eating easier are ones that focus on using the whole animal and local ingredients. David Chang’s Momofuku (lucky peach) restaurants are among them. I first heard of Momofuku (comprised of Noodle Bar, Ssäm Bar, Ko and Má Pêche) through a Google search on “paleo” and “New York City restaurants” that led me to Melissa McEwen’s blog “Hunt Gather Love“. One of her posts extoled the virtues of this proudly vegetarian-unfriendly group of restaurants. In fact, a notice at Ssäm Bar announces, much to the consternation of the ubiquitous vegetarians in the City,

“We do not serve vegetarian-friendly items.”

When vegetarians complained about the restaurant’s unwillingness to cater to their needs, Chang is rumored to have purposely changed the menu to include even more animal products than before. *snort* again! This alone was enough to persuade me to give it a try so G and I ventured to Ssäm Bar for our anniversary last Spring. G told me later that upon looking over the menu he thought we might need to find another place to eat afterwards. But it was precisely because of the wonderfully creative dishes that we ended up having one of our favorite dining experiences ever. David Chang’s menu is full of inspired and innovative dishes that use meat and animal products in new and different ways. One of my favorites was veal sweetbreads with almond, sauerkraut and thai chili (if you Google “sweetbreads” you will find it has nothing to do with wheat). And how can any self respecting primal foods devotee NOT appreciate the masterful uses of bone marrow, pork belly and jowl bacon?!

After our experience at Ssäm Bar we were eager to try the more upscale Má Pêche. We finally got that chance as referenced in Paleo and the City: Lululemon and Central Park Zoo. My youngest son, SP, and I spent the day in “The City” and met up with G for dinner. Má Pêche happens to be in Midtown Manhattan (15 west 56th street) not far from G’s office and close enough to Central Park that SP and I could walk there after our time at the Zoo. 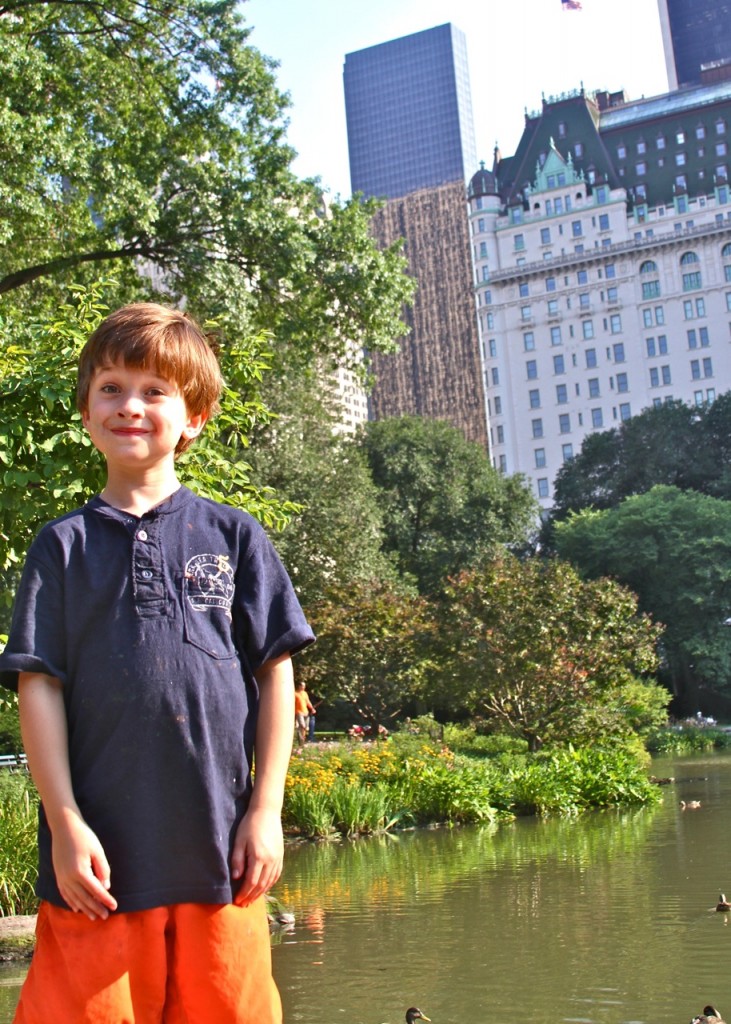 Sweet Pea in Central Park with the Plaza Hotel in view

Dining in New York City with kids can be a challenge when attempting to eat at more upscale restaurants that do not overtly cater to children. Usually I get a babysitter and was skeptical about how things would go at Má Pêche but we decided to give it a try anyway. We were actually pleasantly surprised at how welcoming the staff was during our time there. While the menu is definitely not what I would consider kid friendly we did manage to find some things for SP to enjoy.

(I apologize in advance for the low quality photographs. Taking pictures in restaurants is challenging – especially when you are trying not to be completely obnoxious.)

Má Pêche makes their own sodas and SP chose vanilla. The bartender played a trick on us a few minutes later when he referenced SP’s “Gin and Tonic” causing us to almost flip our lids. After being reassured it really was a vanilla soda and NOT a Gin and Tonic (ha ha, very funny. not), G and I opted for something with more of a kick for ourselves. The Seven Spice Cocktail I had at Ssäm Bar still ranks as THE BEST cocktail I have had in my life. But I decided to give the “Jim Joe” a try this time. It is made with yamazaki 12 year whiskey, elderflower cordial and bitters. Here’s a photo of the drink with the gigantic ice cube favored by bartenders for its slow melt. G had a Vietnamese beer called “Hue”. Not gluten free 🙁

For a starter we chose three cheeses served with a fruit compote:

Caveman Blue from Rogue Creamery in Central Point, OR (we HAD to choose “caveman” of course)
Pawlett from Consider Bardwell Farm in West Pawlett, VT
Coupole from Vermont Butter & Cheese Co in Websterville, VT (looks like a miniature brain) 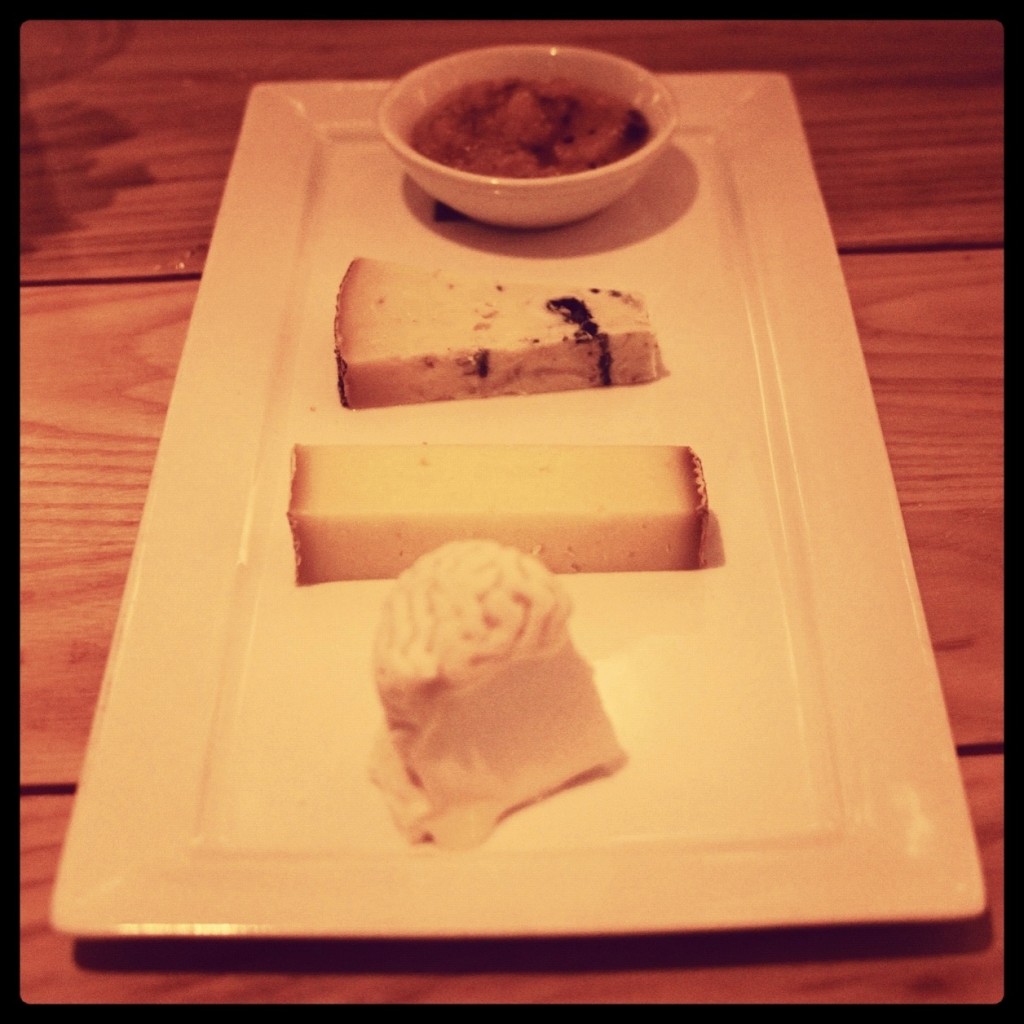 G ordered swordfish served with smoked romaine, tomato and avocado. In spite of the very paleo ingredients he seemed somewhat underwhelmed by the dish. It wasn’t bad but there was nothing about it that was overly special. 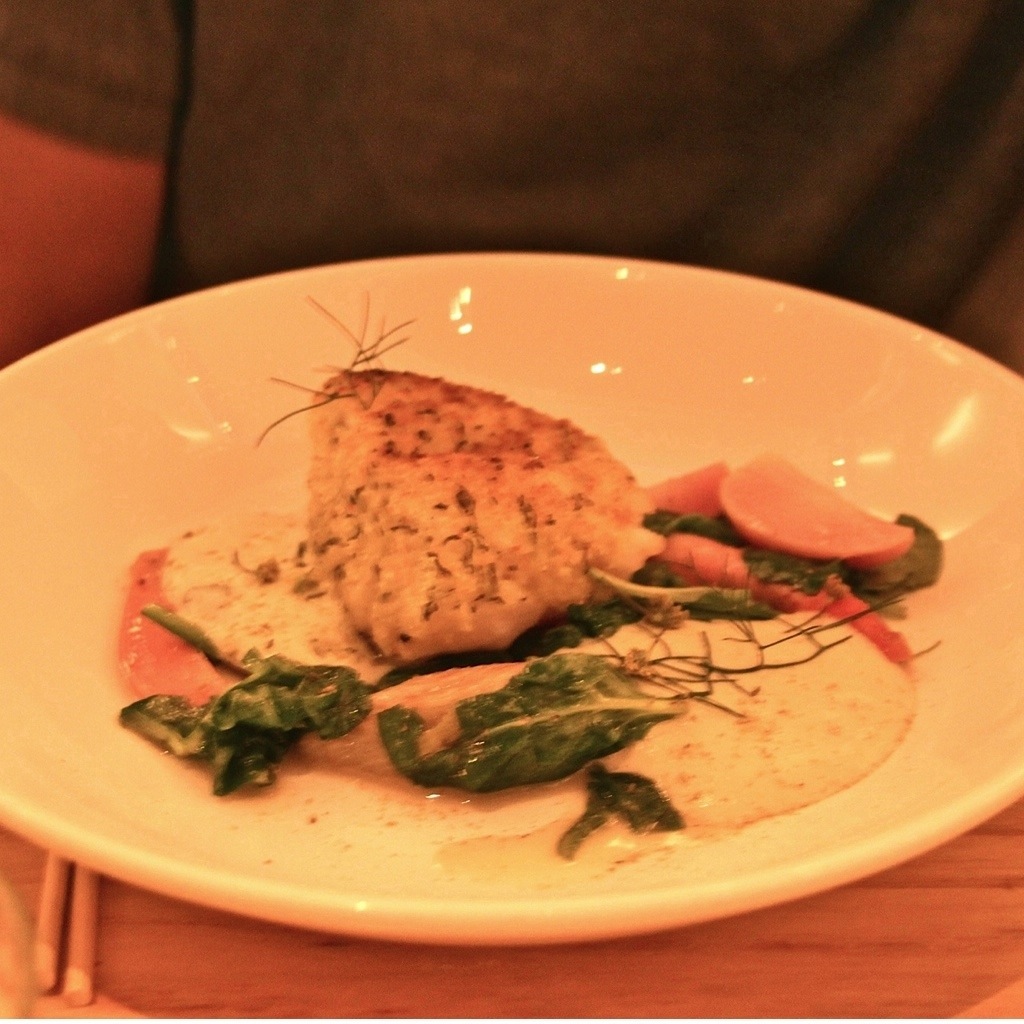 I chose the striped Montauk bass with roasted cauliflower, tomato and coconut. The flavors were delicate and well-balanced with perfectly cooked fish. Once again, all the ingredients were paleo-friendly. 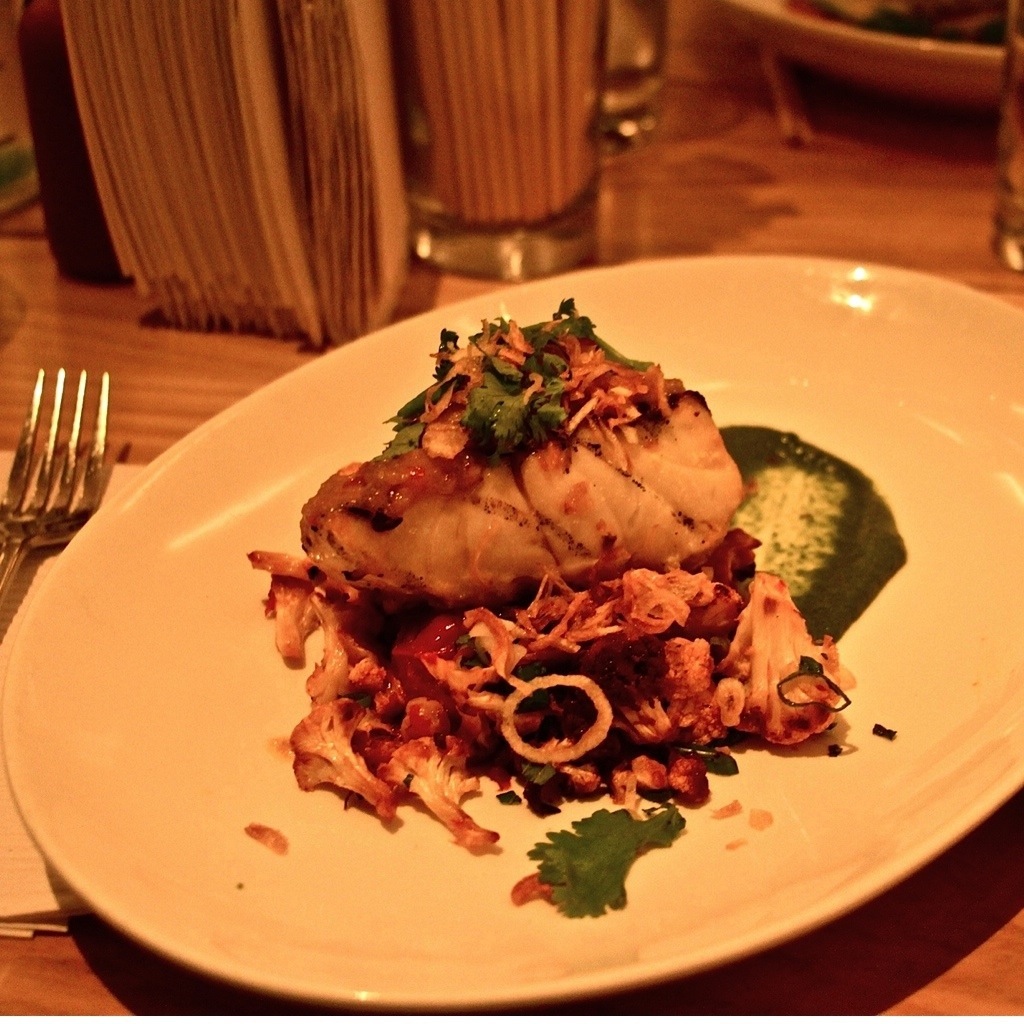 We split a vegetable side dish known as cavolo nero. Cavolo nero is a cultivar of kale (my new best friend) and is also known as “black cabbage”, “Tuscan cabbage” and “Tuscan kale”. It was sliced in a chiffonade and cooked with Chinese duck bacon, maple and red onion. As a paleo/primal foods devotee, again, this was a dish that met my dietary needs and secured my admiration for the creative use of the vegetable and the incorporation of a more unusual meat/fat. Still no grains, legumes, and other than the cheese plate, no dairy. 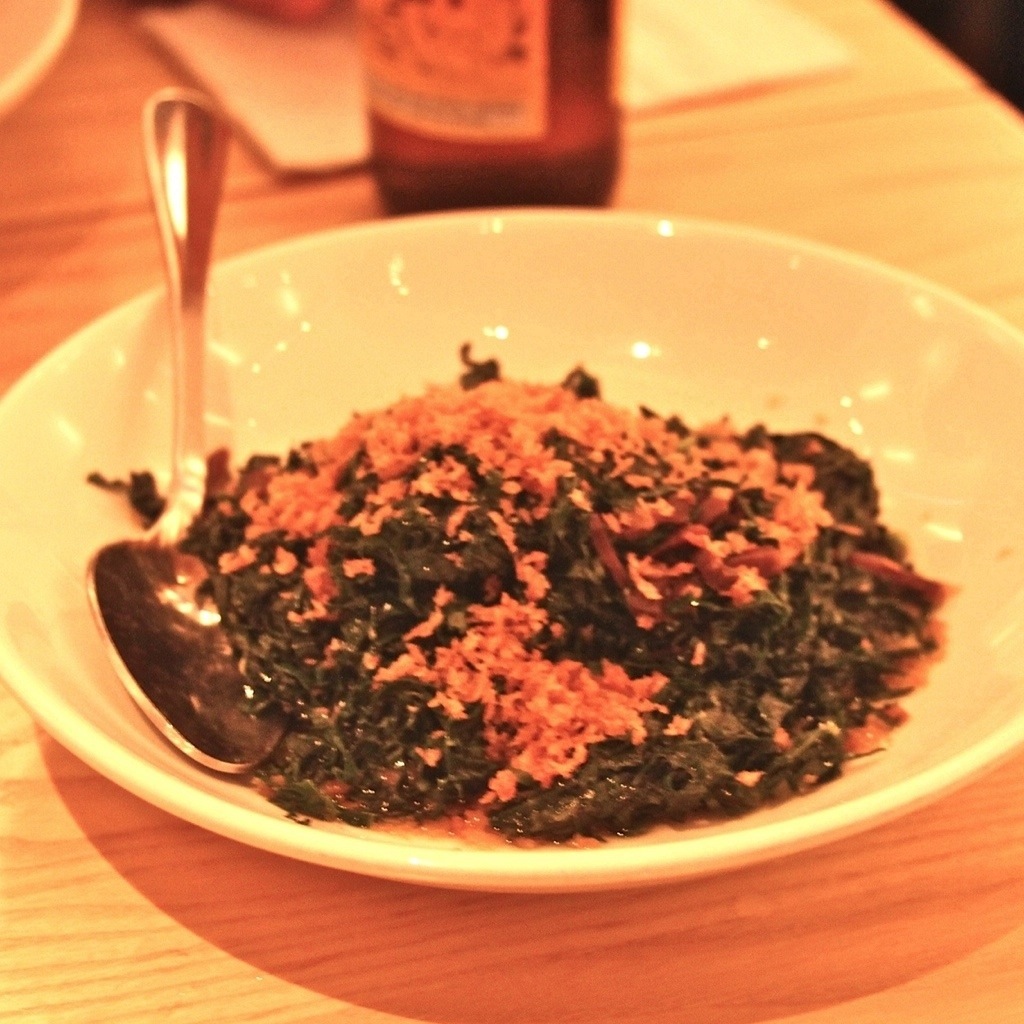 We ordered the Fried Chicken Salad for SP. This was probably the most interesting dish of all but it contained a surprise. The chicken is served in smaller fried chunks along with mint and watermelon. My sense is the chef was trying to simulate a typical summer picnic experience. The only problem for us, given this dish was ordered for a six-year old boy, was that it was served with beer foam. Yes, that froth you see on the plate is beer foam. 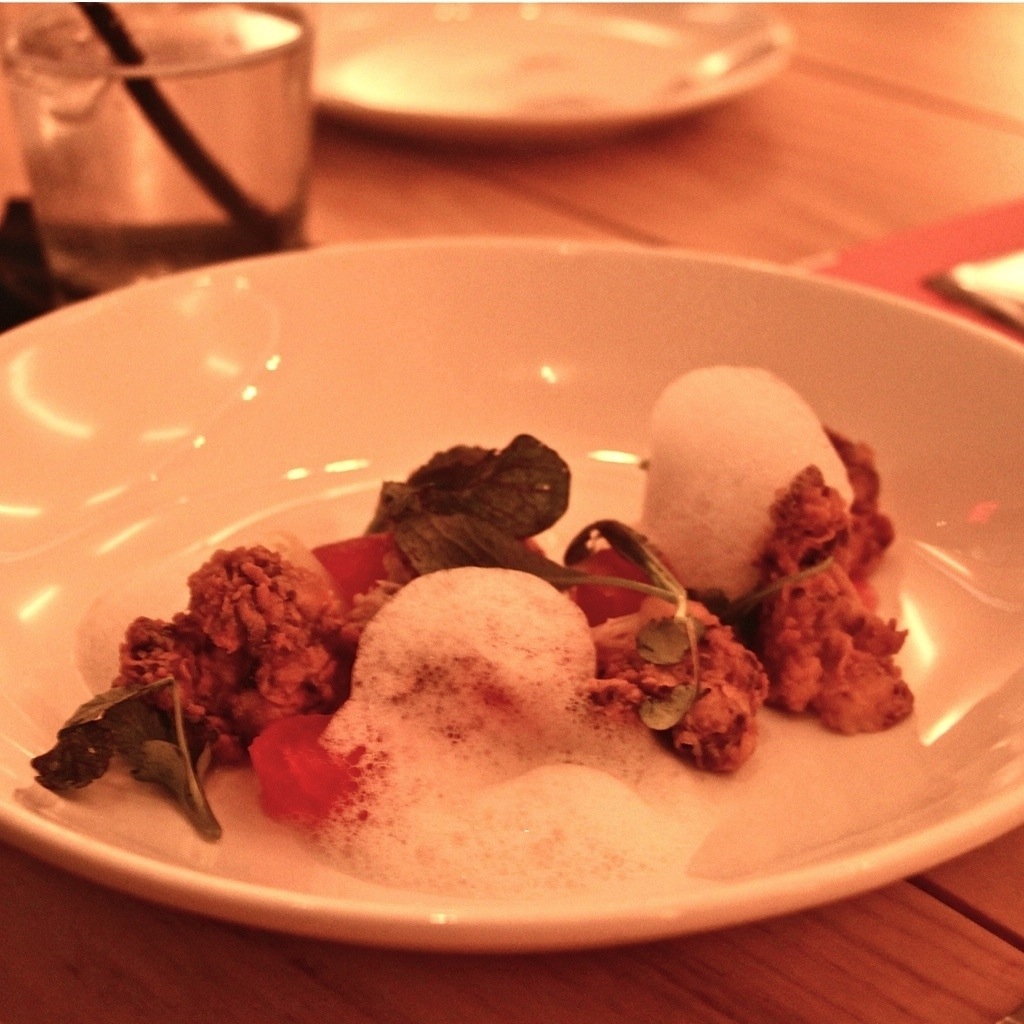 The waitress neglected to mention this when we ordered the dish but when she served it she realized there might be a problem. Given that it was only froth we went ahead and let SP have his Fried Chicken Salad with the froth cleaned off the plate. It was one of the more creative dishes but just reinforced we were not at a restaurant that expects to have little kids as patrons. But hey, SP is not your average kid and he was very well behaved – well except when he pretended to eat his toy snake from Central Park Zoo with chop sticks. On second thought, at a Momofuku restaurant proudly serving Fried Pig’s Head this was not cause for anyone to bat an eye. 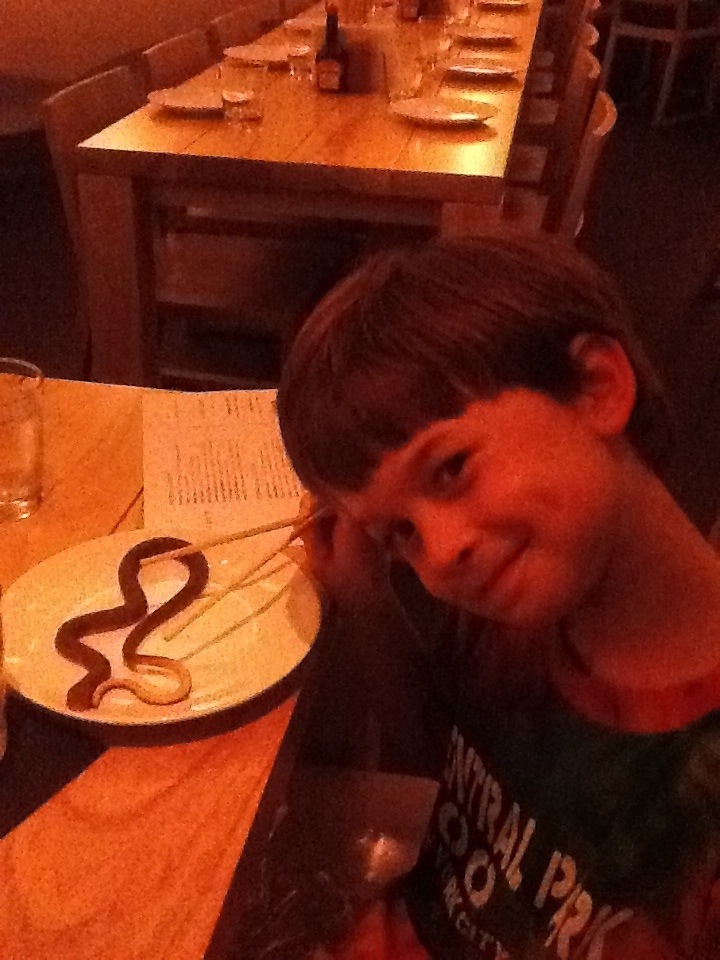 All-in-all we enjoyed our experience at Má Pêche and would definitely return albeit most likely sans the little fellow. Then again, SP might be sorely disappointed at not being able to try the Fried Pig’s Head or Beef 7 Ways. So who knows!

3 Responses to "Paleo and the City: Momofuku’s Má Pêche"