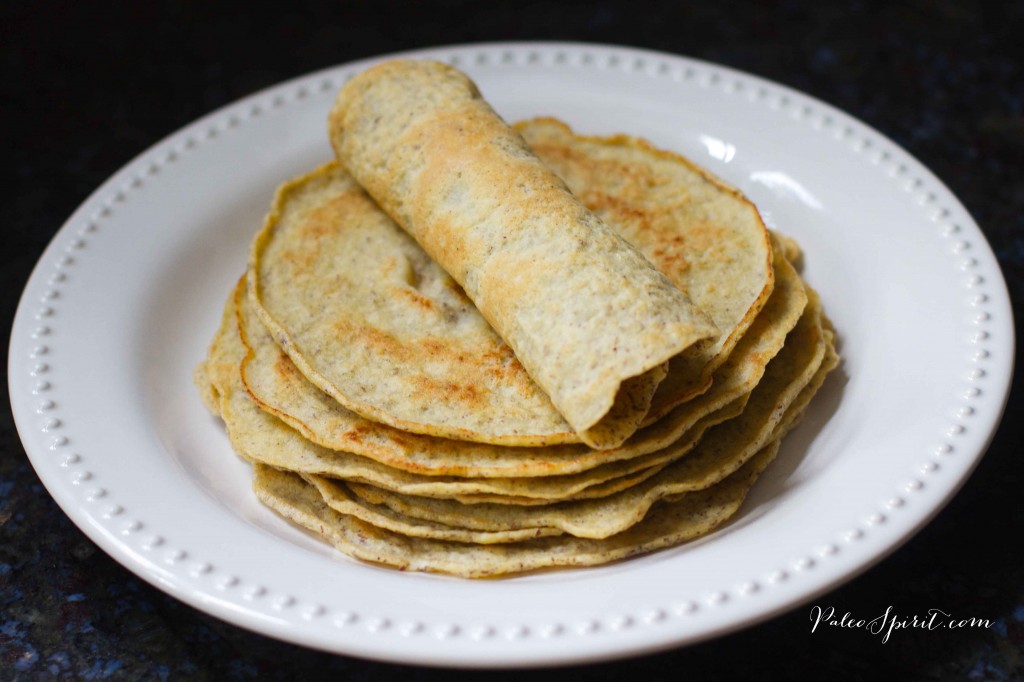 You can take the girl out of Texas but you can’t take Texas out of the girl. I grew up eating Mexican and Tex-Mex food. But after living in New Jersey for many years I have had to learn to live without some of my favorite foods. It’s just not the same around here no matter what some people say. I’m almost always disappointed when attempting to find decent Mexican and Tex-Mex restaurants. And of course having celiac disease and following the paleo diet does place limits on what I can enjoy anyway.

In spite of that, I still consider myself a connoisseur of tortillas. So let’s get one thing straight when it comes to this paleo tortillas recipe. Those of us who are well-acquainted with the taste AND texture of flour and corn tortillas will be tough customers. There’s just no way grain-free tortillas will be exactly the same as “regular” tortillas. But with this recipe my goal was to create something that would not taste TOO eggy, not be too much like a crêpe and would be pliable – able to hold a filling without breaking.

The recipe uses eggs but not nearly as many as some other recipes I have seen. There’s just enough yolk to help them hold together but not enough that it overpowers the flavor. The coconut flour gives it some body but not enough to impart a coconut flavor – something I would find unpleasant in a tortilla. The flax meal helps replace some of the eggs and is one reason the paleo tortillas are flexible. The tapioca flour is a terrific alternative to wheat flours. I have used it before in my Paleo Dinner Rolls recipe and really like the true “bread-like” texture it provides.

Once you get the technique down for making them, paleo tortillas are fairly quick and easy. We have eaten these right after cooking and we have also stored the tortillas in a big zip-lock in the fridge for later use. They stayed flexible after reheating and did not break when they were used to make chicken enchiladas.

I can’t wait to hear your results. I’m sure there will be some people who love them – because, let’s be honest, having tortillas after NOT having tortillas while following the paleo diet is pretty great. There will be others who don’t like them because the tortillas aren’t exactly like the ones they are used to. It will be fun to hear the discussion. Good luck!

The next few posts will be related to recipes needed to make Paleo Chicken Enchiladas (Chicken Enchiladas Verdes). The first one will be for this Roasted Tomatillo Salsa (Salsa Verde). It turned out GREAT! I used up a ton of tomatillos, peppers and garlic from our local CSA. 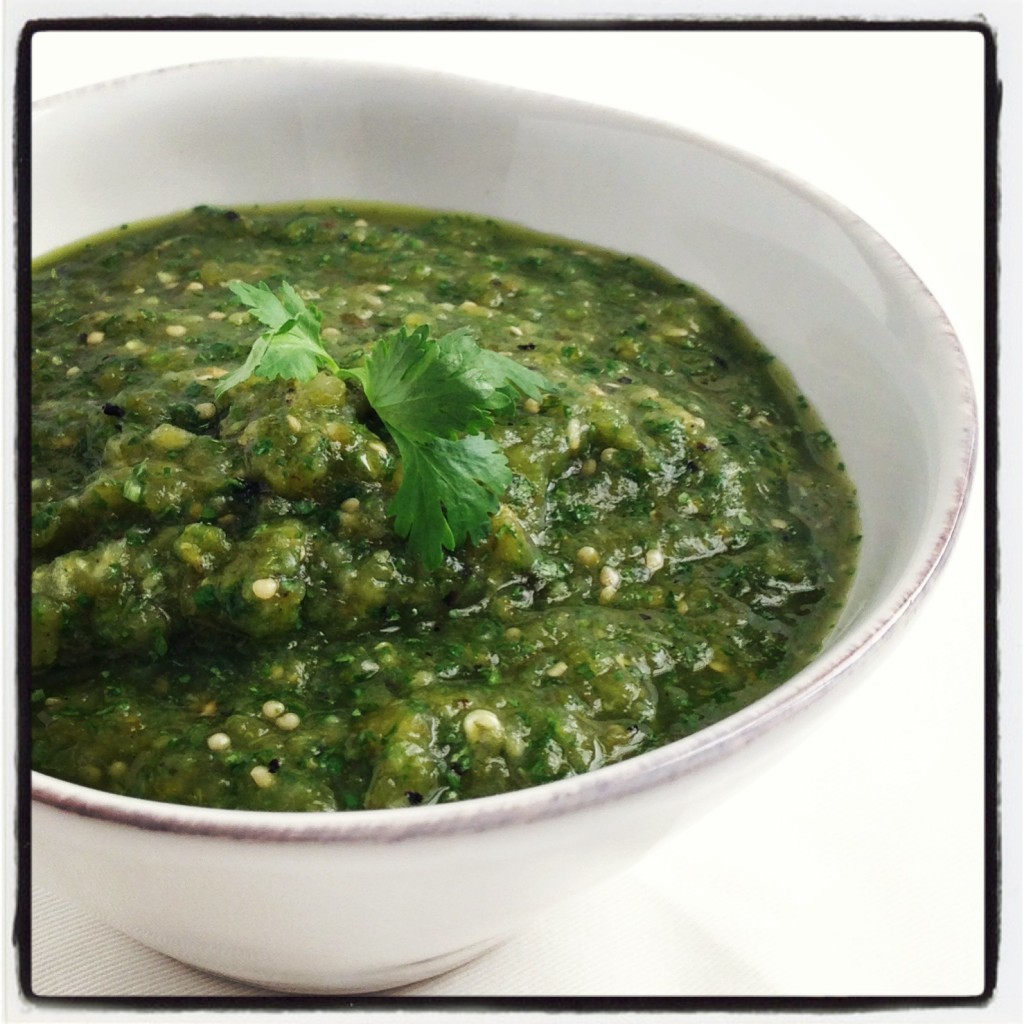 After the salsa verde recipe I will share one for Cashew Sour Cream Sauce (dairy-free) and then I will use these paleo tortillas to make Chicken Enchiladas Verdes. Here’s what the tortillas look like wrapping some shredded chicken in preparation for the enchiladas. 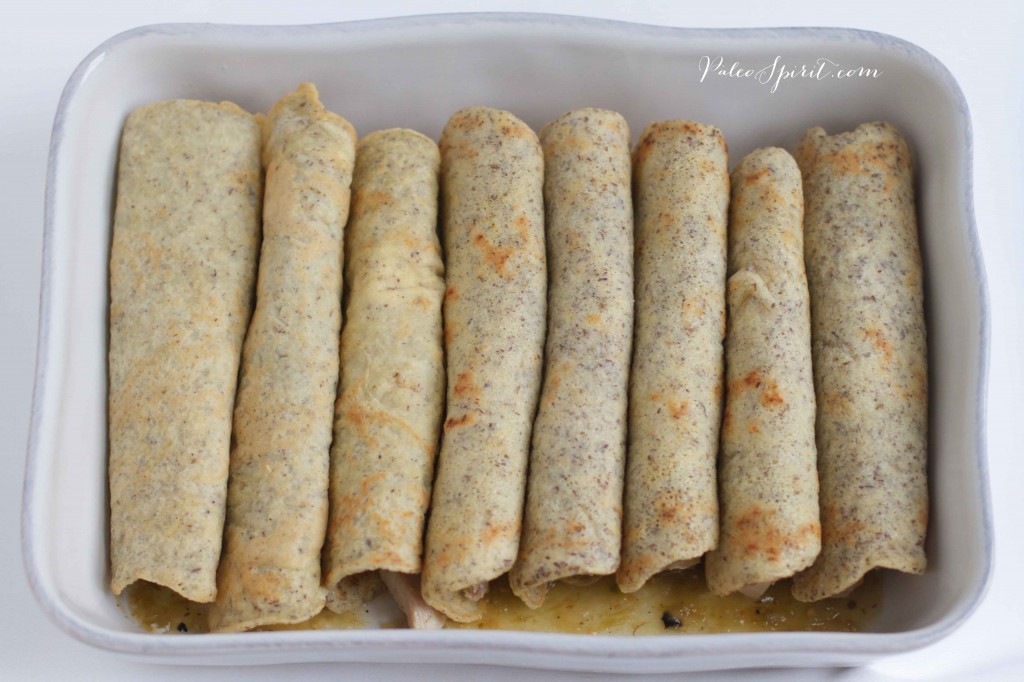 Several of you have asked about nutrition information. I don’t usually run those numbers mainly because I don’t have the time to devote to it. But also because I shy away from getting into calorie and fat counting. As long as I eat the right foods I have not had a problem maintaining my health and weight. But given that many of us opt for lower carb options (I do tend to eat fairly low carb) and this recipe contains tapioca, which is fairly starchy, I thought it would make sense to provide the info. The source is www.caloriecount.about.com