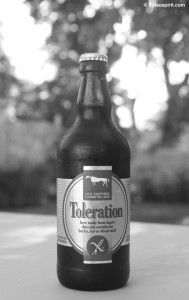 Continuing my ongoing effort to review gluten-free beers for Paleo beer-lovers, up next is TOLERATION Gluten Free Ale, from “Nick Stafford’s Hambleton Ales” in Yorkshire, England.

First, a little history about “Nick Stafford’s Hambleton Ales”. Not surprisingly, the company is owned by its founder, Nick Stafford. According to the company’s website, after being laid-off twice in only seven months (or “made redundant”, as the Brits like to say) in 1991, Mr. Stafford was bitten by the entrepreneurial bug and decided to start his own brewery.

He must have known what he was doing, because he was almost immediately successful. Revenues after the first year of operation were approximately £100,000, and within three years, the brewery had to relocate to a larger facility to accommodate growing customer orders. Current annual revenues at Hambleton Ales are in excess of £1,000,000, and the brewery has won several awards, including the 1997 CAMRA Champion Winter Beer of Britain for its “Nightmare” brand of beer.

Of particular interest to devotees of the Paleo lifestyle who appreciate the concept of local sourcing, Mr. Stafford’s business is dedicated to serving those who live and work in the Yorkshire area. Hambleton Ales employs local citizens (15) at the brewery, and uses local suppliers as much as possible for ingredients. For example, the main ingredient of malted barley is purchased exclusively from a local supplier from the town of Castleford, in West Yorkshire.

In February, 2005, the brewery launched ‘Hambleton Ales Gluten and Wheat Free Ale’, which has the distinction of being the first British-brewed gluten-free beer. This allowed Mr. Stafford to tap (no pun intended) directly into the market of approximately 100,000 persons in the U.K. with celiac disease.

I first encountered TOLERATION at Wegman’s, which has an excellent Wine & Spirits department. Don’t let the $8/bottle price-tag discourage you; it’s a big bottle. My wife and I split it evenly, and we both got a full glass to drink.

The pour seemed normal, and produced a respectable head of light, airy foam, similar to what you might have with Belgian-type ale. The aroma was pleasant, and the color was a nice, dark amber, so nothing unusual there. The overall taste was definitely a positive, with a nice balance of sweetness, nuts, and hops, with a mild, sweet finish.

Now, about that finish. When reviewing a gluten-free beer, I like to remind readers up-front to expect a sweeter aftertaste than they would normally get from standard beer, and TOLERATION definitely has a sweeter aftertaste. However, it’s very mild, and if I hadn’t been expecting it I probably wouldn’t have noticed it. Depending upon your preferences, this can be either good or bad. Personally, I’m neutral on this issue. Although I’ve come to appreciate the slightly sweet, refreshing “bite” of gluten-free beers, I understand that some folks might not like it. Regardless, TOLERATION’s mild aftertaste will satisfy beer drinkers on both sides of that particular issue.

Overall, I enjoyed both the taste and the gluten-free make-up of TOLERATION, and I would heartily recommend it to Paleo and gluten-free beer-lovers.  I would love to hear from others who have tried TOLERATION or other gluten free beers. 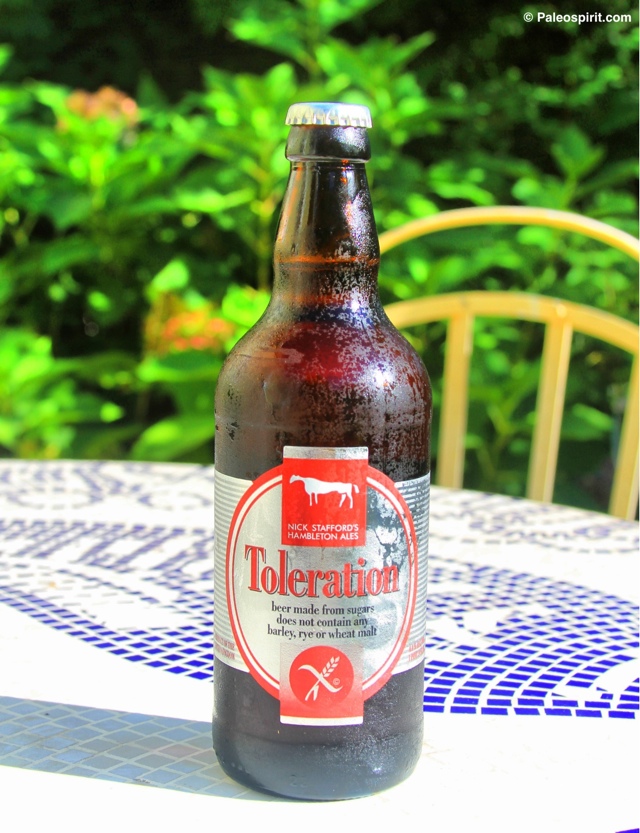