I have been eating a paleo diet since early February 2011 but was only recently diagnosed with celiac disease.  So even though the paleo diet is gluten-free by nature, because it eliminates grains, I was not concerned about the seemingly miniscule amount of gluten I was ingesting every week at church worship services via communion bread. However, after learning a ton about gluten intolerance and celiac disease I know even a small amount of gluten can set off an immune reaction. Once I was diagnosed, I knew I needed to take the avoidance of gluten more seriously.

For a person with celiac disease, ingesting even a small amount of gluten is problematic. Even a crumb is enough to set off a reaction. The reaction may be immediate or it may take time to manifest itself but either way damage is being done to your system. I was sensitizing myself every single week with the matzo cracker in communion. We do not have a priest who hands out individual “bread” or “hosts”. At our congregation we have trays that are passed around that contain a matzo cracker. Church members break off a piece as the tray is passed. My temporary solution was to break off a piece and then disposed of it later. The idea of just waving off the tray as it was offered seemed awkward, like there was some other reason I was not willing to partake other than a health issue. And it bothered my conscience that I was just going through the motions and not really partaking fully in the communion. What to do?

Just last week I noticed that a good friend, and sister in Christ, Pamela, was preparing communion for the month of December. I have spoken to her previously about my health problems and I knew she would understand my concern about the gluten in the communion bread. Pamela immediately began researching gluten-free options for me. She called me later that afternoon asking all sorts of questions. Clearly she took this task seriously and this morning she presented me with the solution! 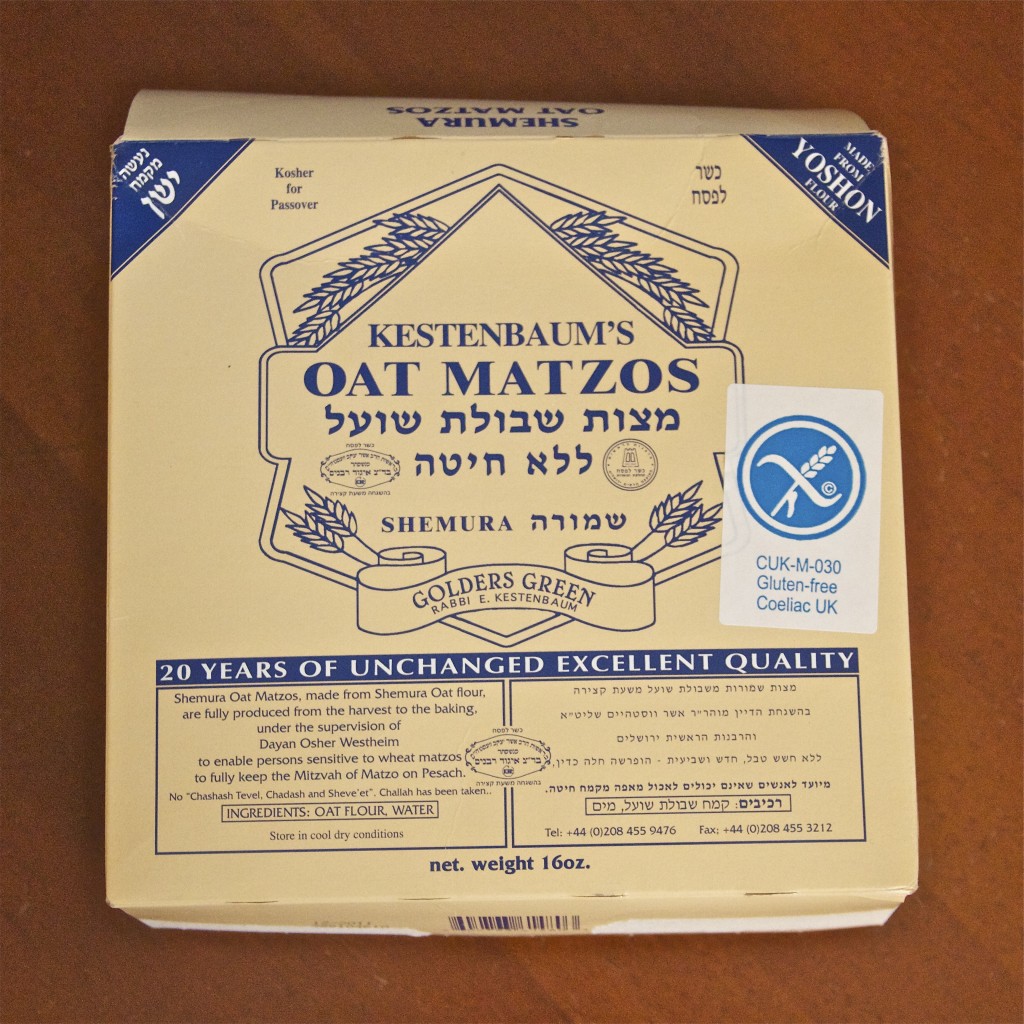 Kestenbaum’s Oat Matzos are considered gluten-free and safe for people with celiac disease (coeliac). At first I was a little confused because I know that oats are a food not considered to be gluten-free. However, according to the makers of these oat matzos,

“Shemura Oat Matzos, made of Shemura Oat flour, are fully produed from the harvest to the baking, under the supervision of Dayan Osher Westheim to enable person sensitive to wheat matzos to fully keep the Mitzvah of Matzo on Pesach.”

Now, as a Christian, I am not exactly concerned about keeping the Mitzvah of Matzo on Pesach. If I’m being honest I don’t even know what that means! But I do know the problem with oats for people with celiac disease is not that they inherently contain gluten. The problem lies in the fact that oats are easily contaminated with gluten-containing grains like wheat, barley and rye. So this producer ensures that the growing, harvesting, baking and packaging of the oats is free of these contaminants. The result is a product that is simply oat flour and water, and is considered gluten-free and safe for celiacs. The Kestenbaum website states:

“About 20 years ago Rabbi Kestenbaum started producing these matzos, and in due course Hashem helped him to breed completely gluten free oats. These are used to produce the first gluten free matzos in the world. The machine matzos are packed in boxes weighing approximately 1lb each net and holding about 11 matzos.” 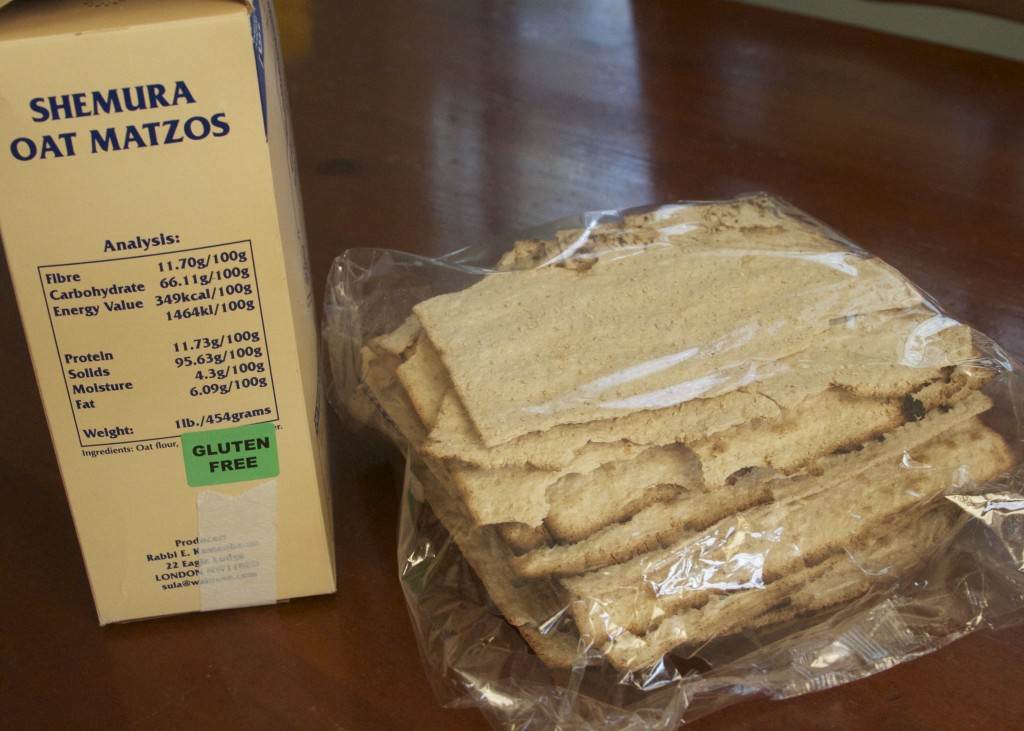 Pamela explained to me that during her research she came across an option through a Christian resource known as Cokesbury. But she took issue with the long list of ingredients in their gluten-free communion wafer offering. She was determined to ensure she was getting something that had absolutely no leavening agents whatsoever. So she emailed a rabbi in New York who is known to make gluten-free matzo. The problem is he only makes it during Passover. Pamela asked the rabbi what he would recommend for those of us who might want a gluten-free matzo year-round. He was the one who suggested she look into Kestenbaum’s Oat Matzos. Taking his advice, Pamela ordered the 16 oz package from www.glutenfreeplaza.com. We ended up with a product that is labeled as safe for celiacs and contains only gluten-free oats and water. Problem solved!

The 16 ounces of oat matzos is probably enough to last me a lifetime! Most likely I will store it in my freezer at home and take some with me to worship services. (As far as I know I am the only one in our midst with celiac disease.) Our congregation has some portable communion kits that are used for persons who are unable to join the corporate worship service. I borrowed one of the little containers today for storing my gluten-free communion bread.

It’s a very cute little thing too. But in order to keep the portable communion kit in tact I will need to find another small container to use for the purpose.

I am really grateful to have a gluten-free option for communion. And I am touched by the kindness of my friend, Pamela, who researched this for me and went out of her way to ensure my health needs are met AND we are following the example of Christ in using unleavened bread. Now the only trouble will be in making sure my scatterbrained self actually remembers to take it with me to the worship services. 🙂

Estrella Damm Daura: The “Star” of Gluten-Free Beers Does the Paleo Diet Make Sense Only in Light of Evolution?
0
Share this post