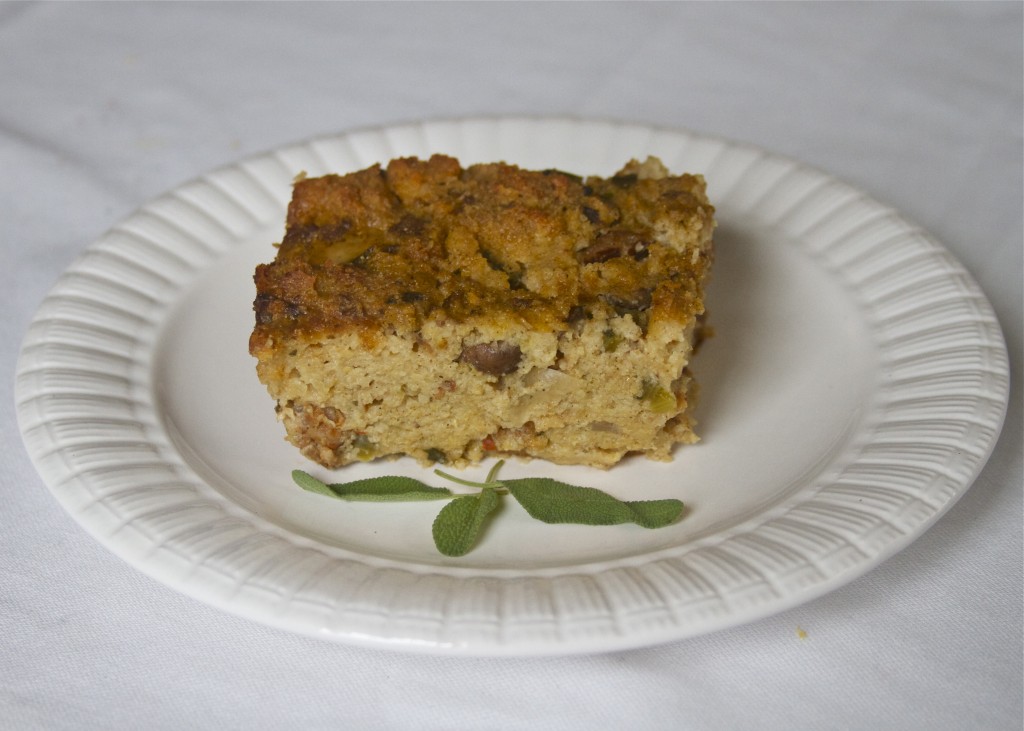 I have been eating Paleo for many months now and that means I do not eat grains. Having been recently diagnosed with celiac disease it has become clear the removal of gluten from my diet has been instrumental in the general improvement in my health. I strongly believe the benefits of Paleo go way beyond the inherently gluten-free nature of this way of eating. Having said that, I will admit a willingness to indulge in eating other gluten-free grains on rare occasion.

Thanksgiving is one of those times.

Now, this does not mean I am willing to throw Paleo eating out the window even if only for the Thanksgiving meal. So we will keep everything totally Paleo but for one thing – cornbread dressing. I NEED to eat cornbread dressing at Thanksgiving. It is in my genes. It just is. So I searched far and wide for a good cornbread recipe. I found one at a blog called The Art of Gluten Free Baking. The recipe ingredients and directions have been altered a bit with the specification of coconut crystals in place of sugar, Greek yogurt in place of the sour cream and more milk to thin the batter because of the extra thick nature of the Greek yogurt. The easy recipe results in a gluten free cornbread that is very moist and tender. I like the fact it uses masa flour because it was just about the only non-Paleo food I did not throw away. It is a very fine flour similar to regular wheat flour and is used in its place in this gluten-free cornbread recipe. 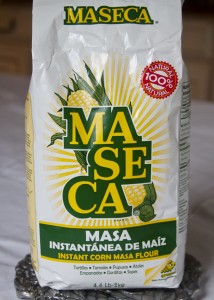 The cornbread dressing is inspired by my great-grandmother’s recipe passed on to me by my mother. I added sausage and some extra veggies and swapped out the evaporated milk for some extra chicken stock and heavy cream. I thought it turned out terrific. It was moist like a custard with a nice spicy kick from the sausage. There was a good balance of sage that was not over-powering. I will be enjoying this with my turkey and Paleo cranberry sauce and feeling not the least bit deprived.

Now for the recipes! 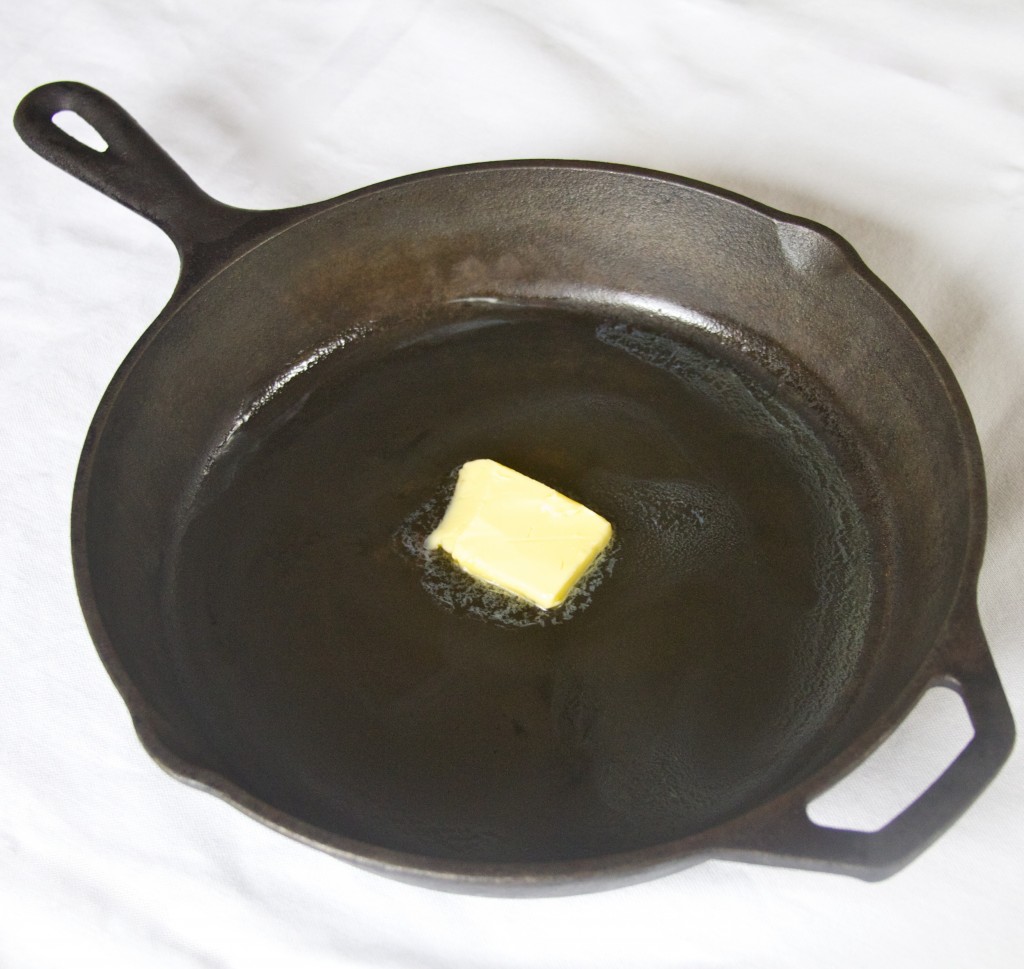 Put skillet into the preheated oven for five minutes.
While the pan is heating up, pour the wet ingredients into the dry ingredients and stir just until combined. Your batter will be thick – thicker than cake batter. (If it is overly dry you can thin it out with more milk.)
Remove the hot skillet from the oven and make sure the bottom of the pan is covered with the melted butter.
Pour the batter into the skillet and place back into the oven. 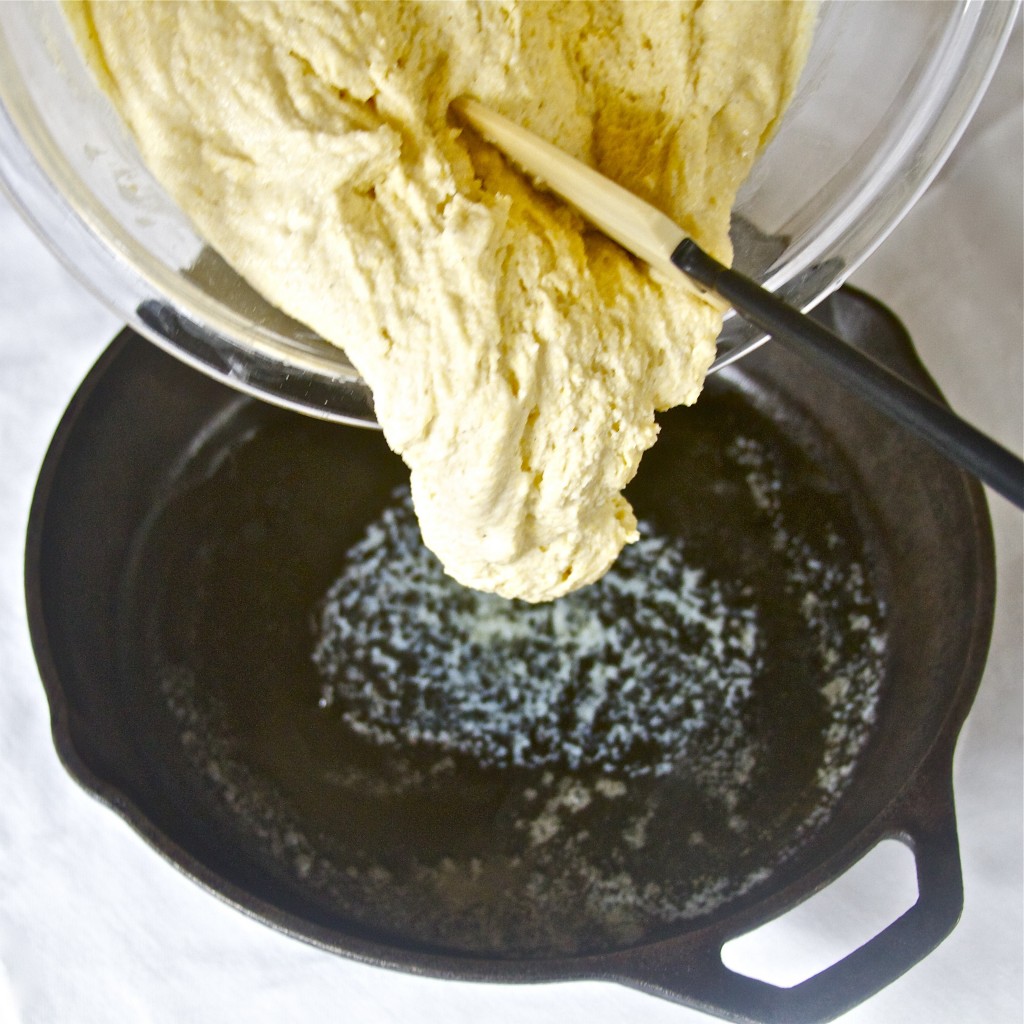 Bake for 20 minutes or until cornbread is golden on top. 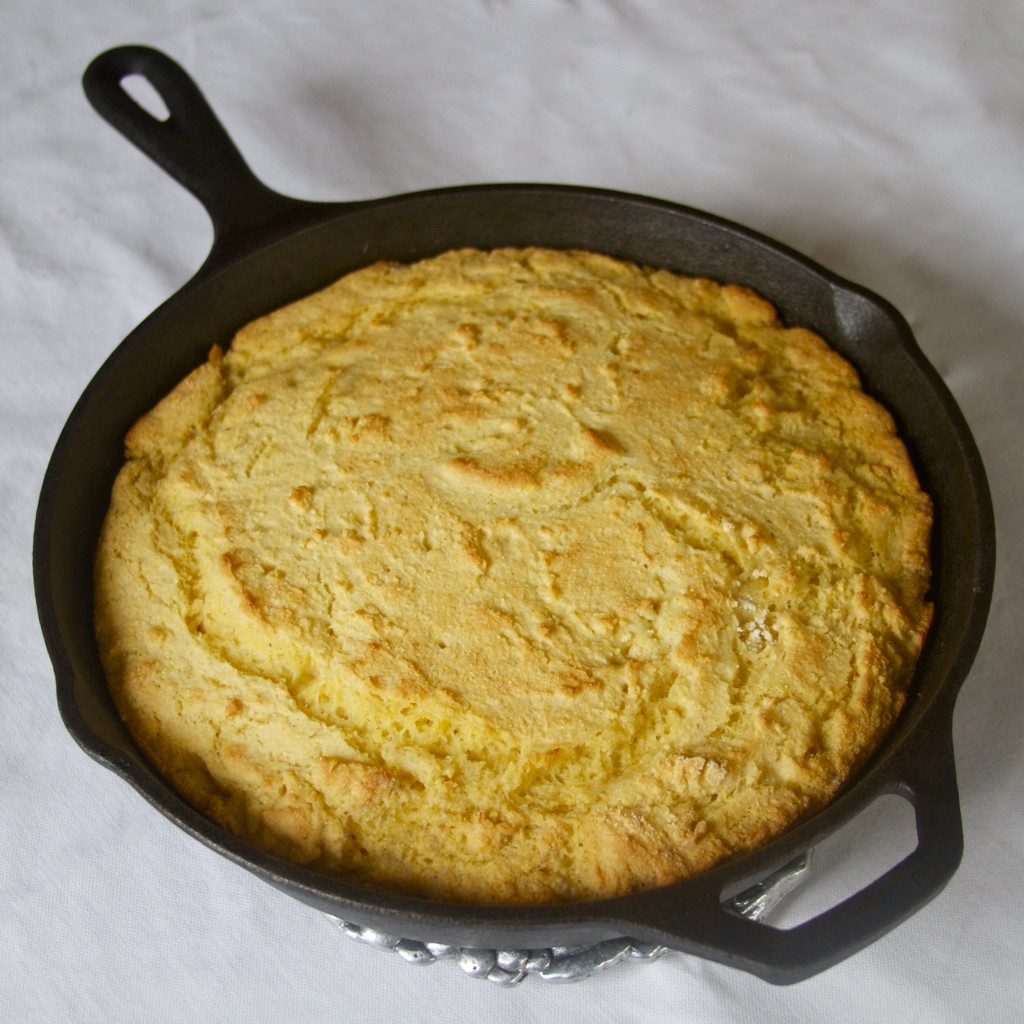 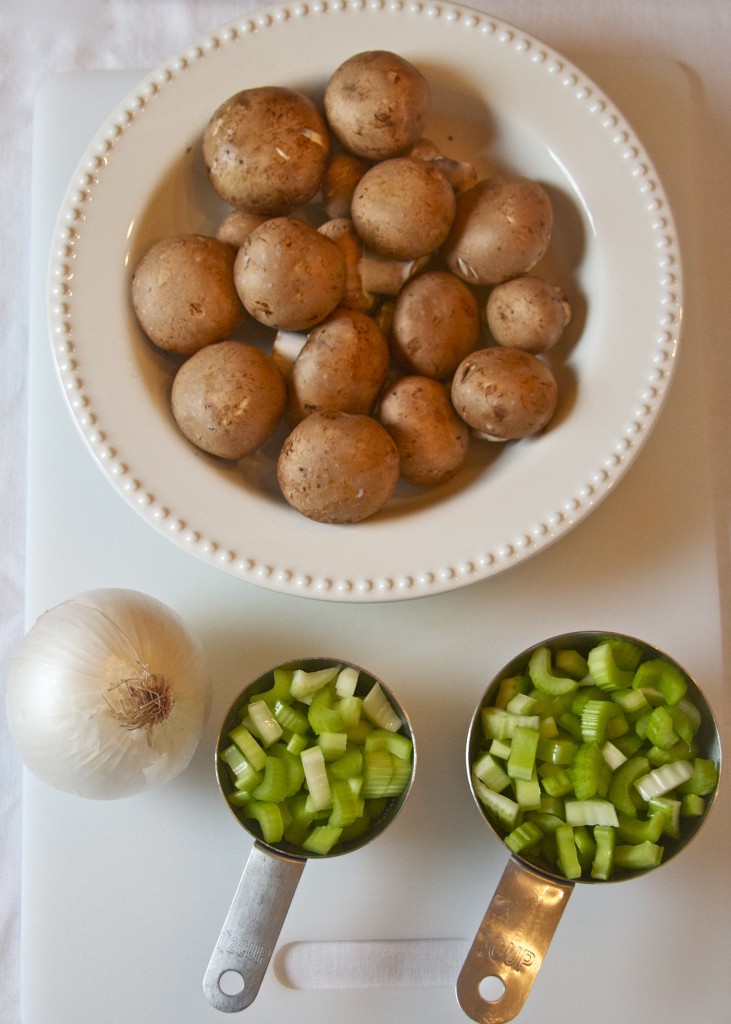 Cut the gluten-free skillet cornbread into cubes and place in a large mixing bowl. 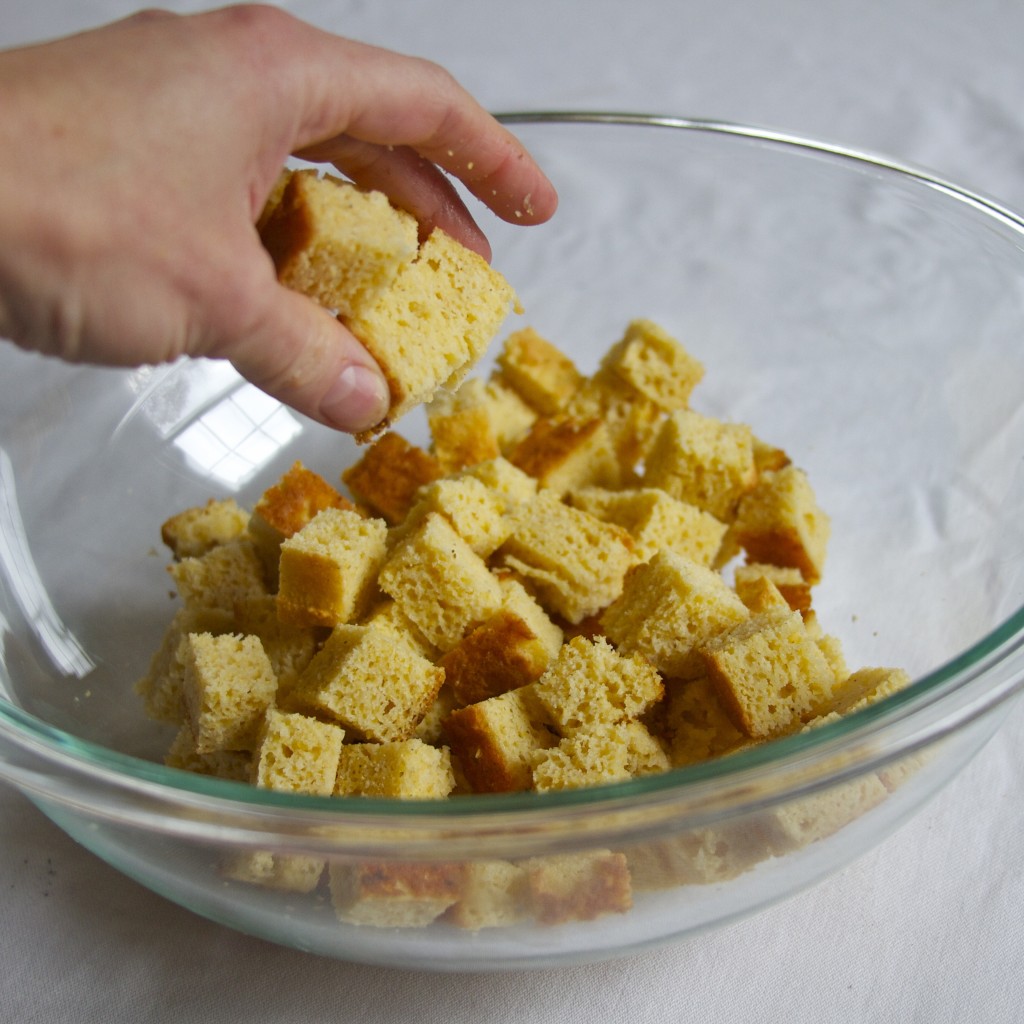 Brown the sausage in a large pan. Remove cooked sausage and set aside leaving the fat from the sausage in the pan.
Add bacon fat or butter to pan and sauté the celery and onions for five minutes.
Add the sliced mushrooms and continue cooking for another 5 minutes.
To the pan, add the browned sausage, dried sage, fresh sage, celery seeds, salt and pepper.
Pour the chicken stock into the pan, bring up to a boil and simmer for about 5 minutes. Allow to cool slightly.
Pour the sausage and vegetable mixture over the cubed cornbread in the mixing bowl. 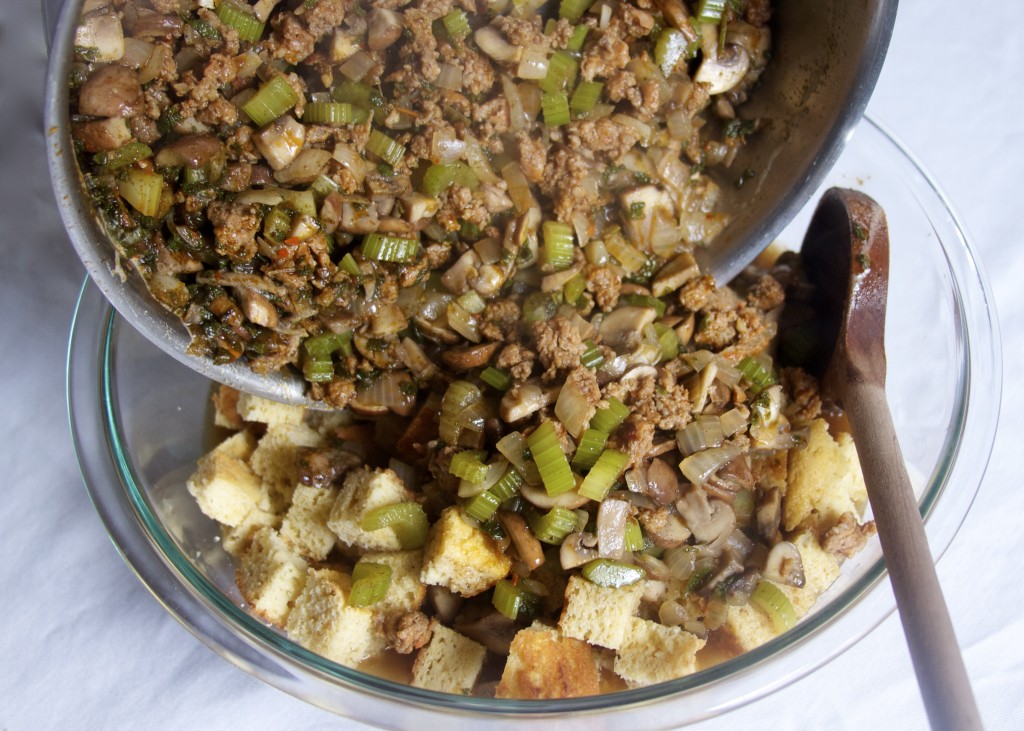 Pour the heavy cream onto the mixture.
Add the beaten eggs and gently stir until combined and the cornbread has absorbed some of the liquid.
Check for proper seasoning and adjust with some sea salt if necessary.
Divide the dressing mixture between two 8″ x 8″ pans that have been buttered. 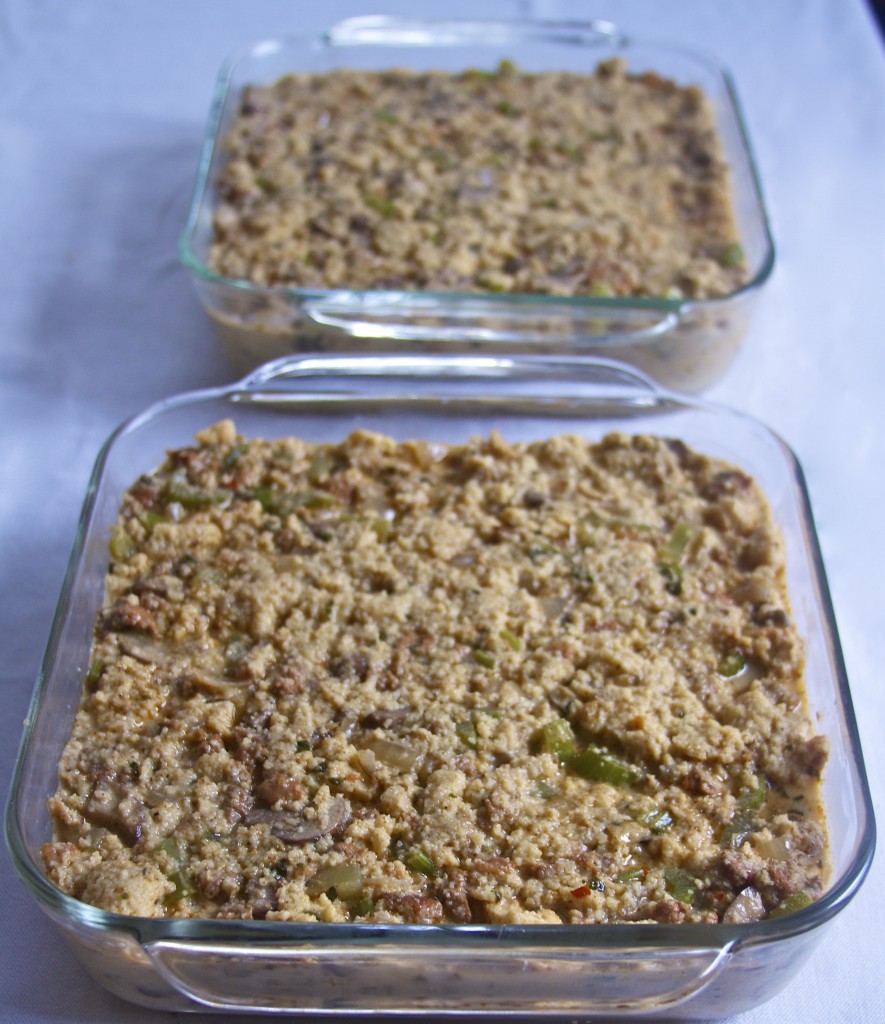 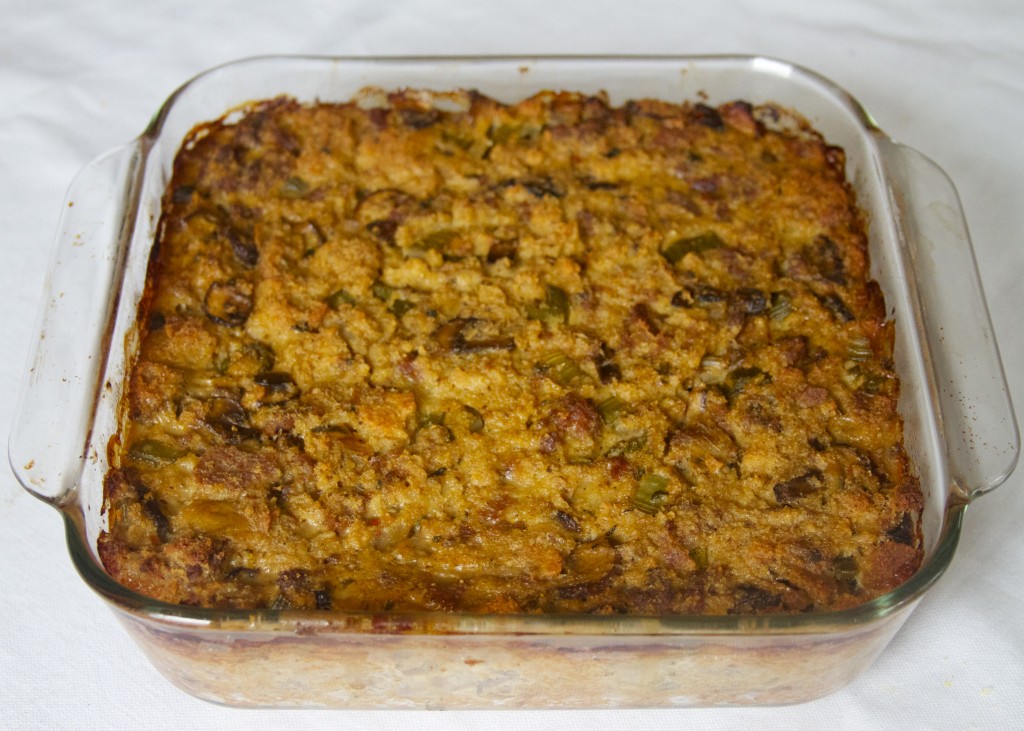