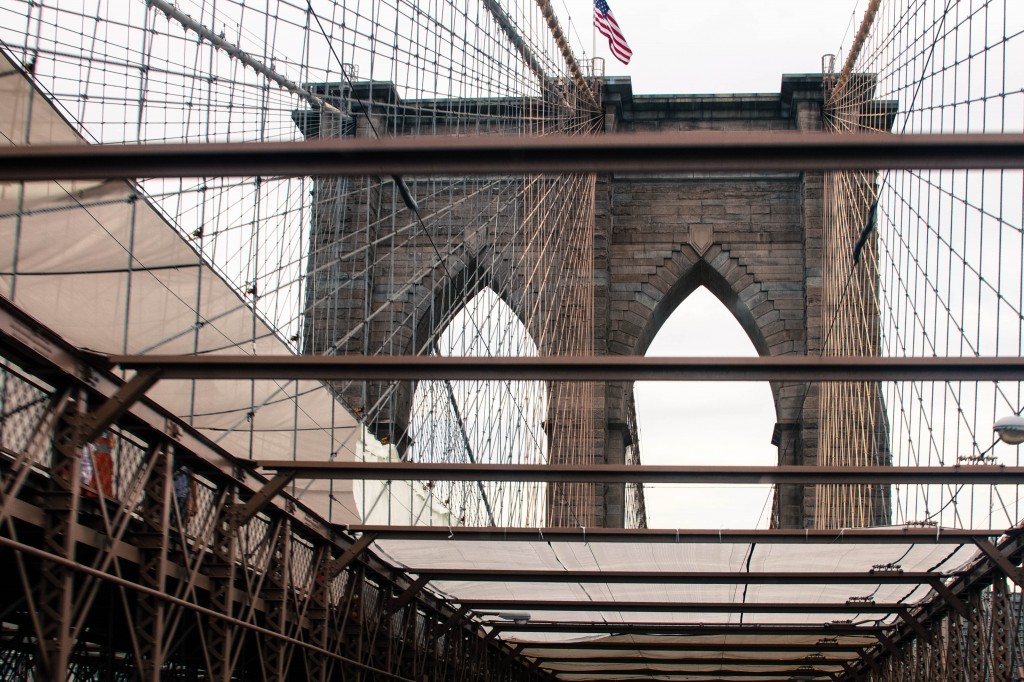 It’s been decided. Brooklyn is where I want to live.

Of course, I also want to live in Costa Rica, Tuscany and New Zealand. Well, then there’s Hawaii, Sardinia and Austin. Okay, so maybe I’m a little fickle when it comes to places I have visited or wish to visit. But seriously, Brooklyn does have its charms. Having lived in the New York City area for many years it is a bit of a travesty we had never visited Brooklyn. So one Saturday in August we ventured to Brooklyn to take in a few sites and enjoy some tasty (hopefully paleo-friendly food). We tackled the Brooklyn Botanic Garden and a couple of establishments serving cutting edge, high-quality eats: Fatty ‘Cue and OddFellows Ice Cream Co.

The gardens were recommended by an artist friend, Graydon Parrish, who lived in Brooklyn during his early art-school days. He knows I like flowers and did not steer me wrong because the gardens are absolutely stunning.

The BBG has a lot of educational sections for kids. I love how it provides an area for city kids to learn a lot about gardening and just have plain old fun interacting with nature. 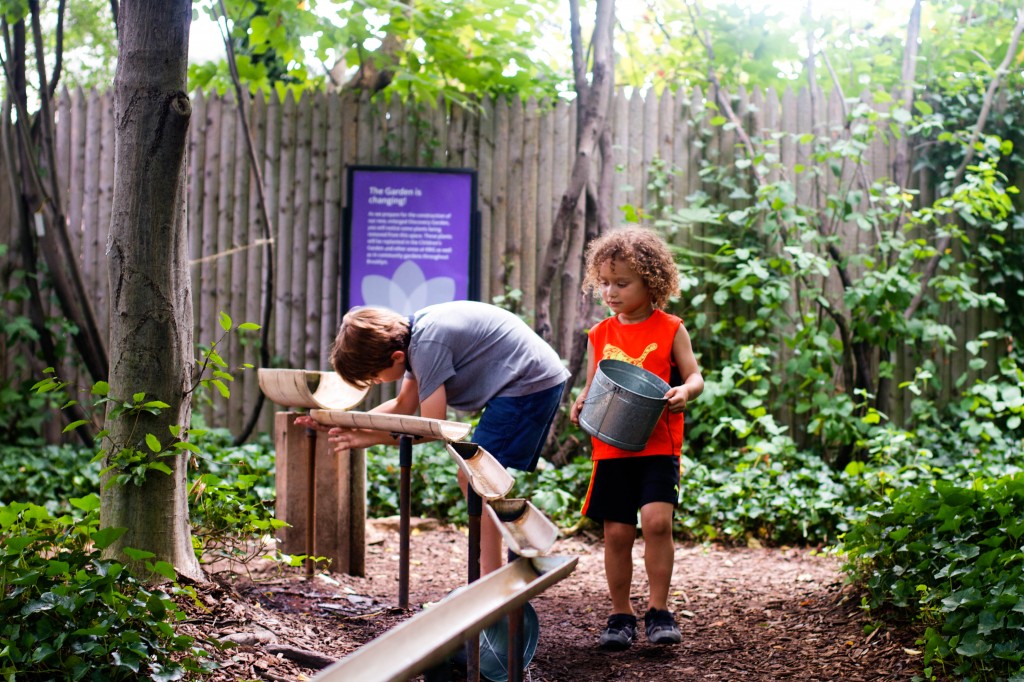 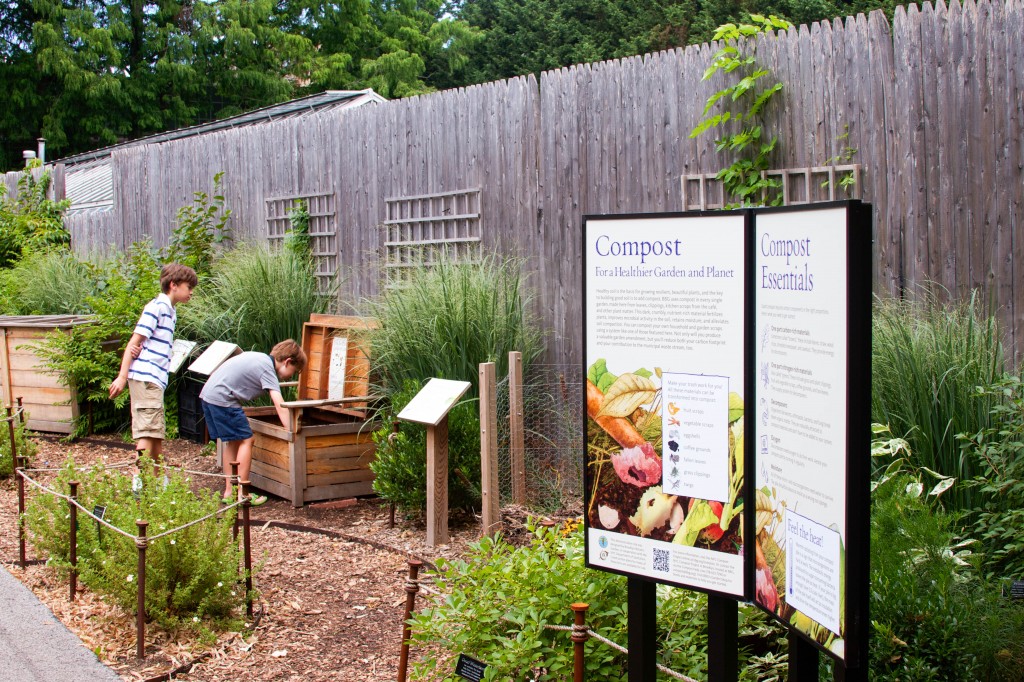 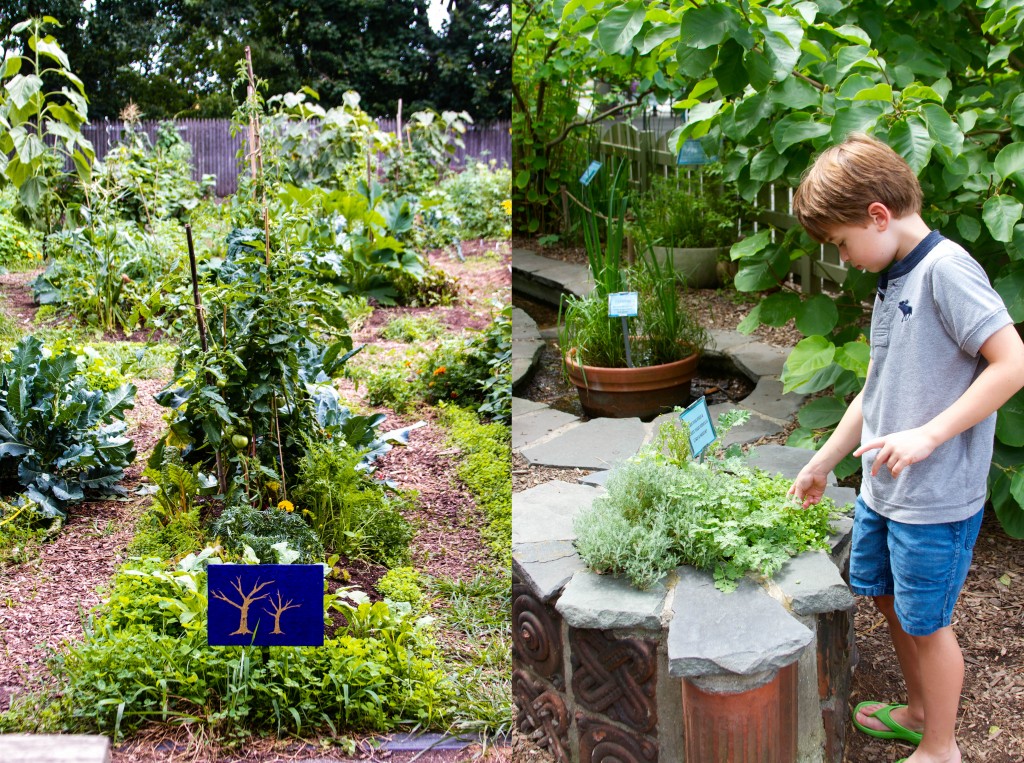 The flowers in the garden are amazing, astounding, astonishing! 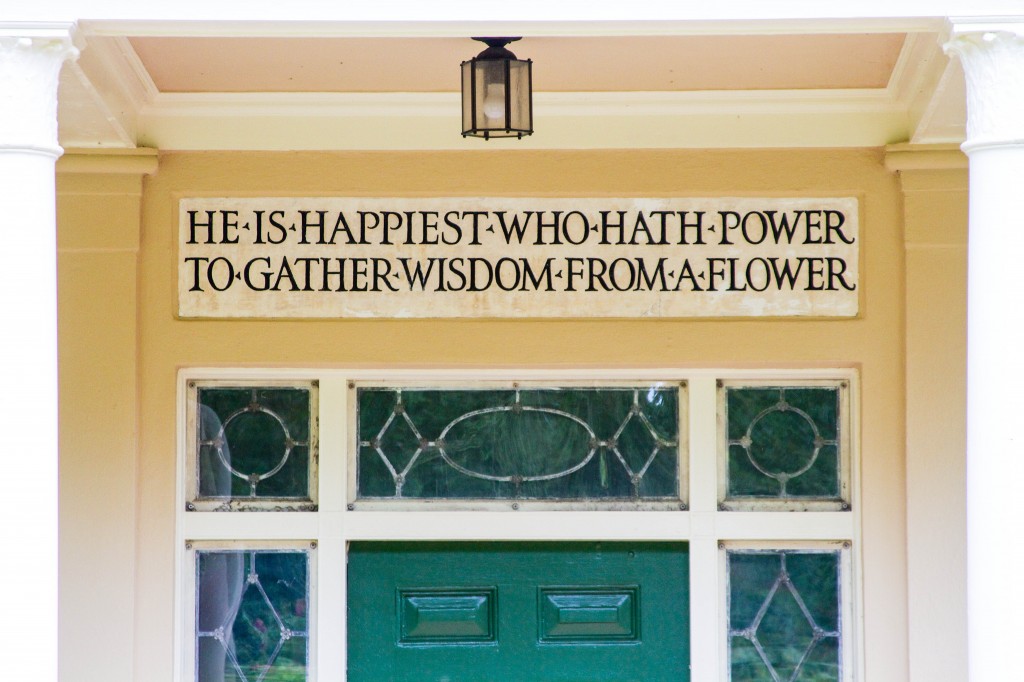 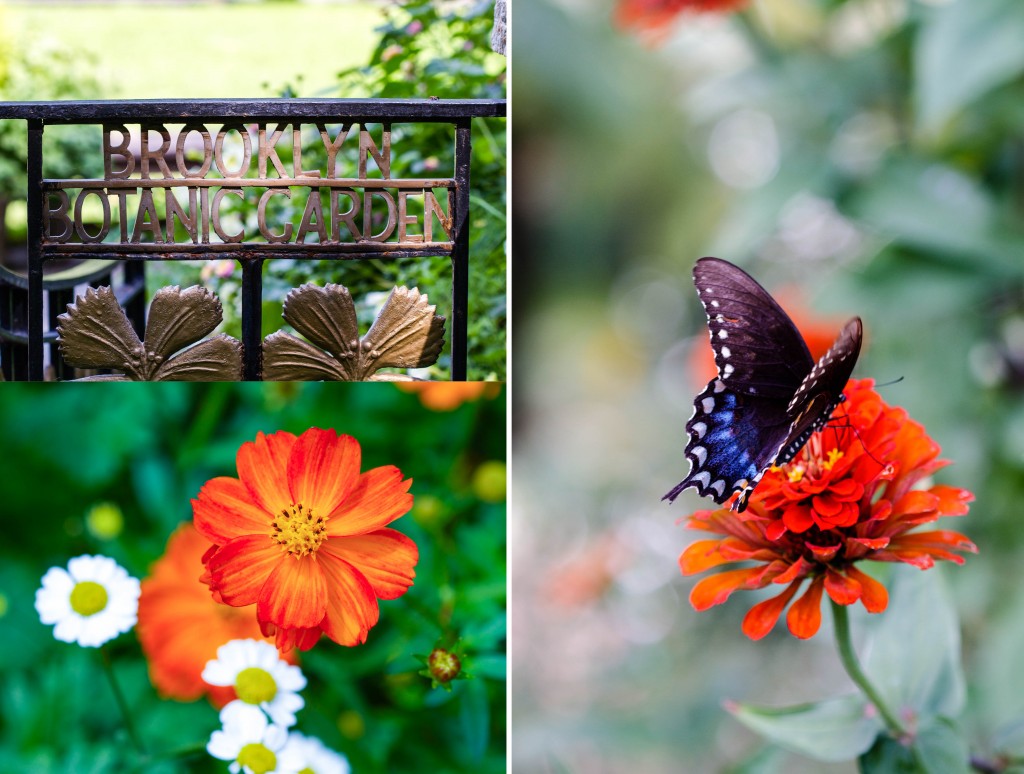 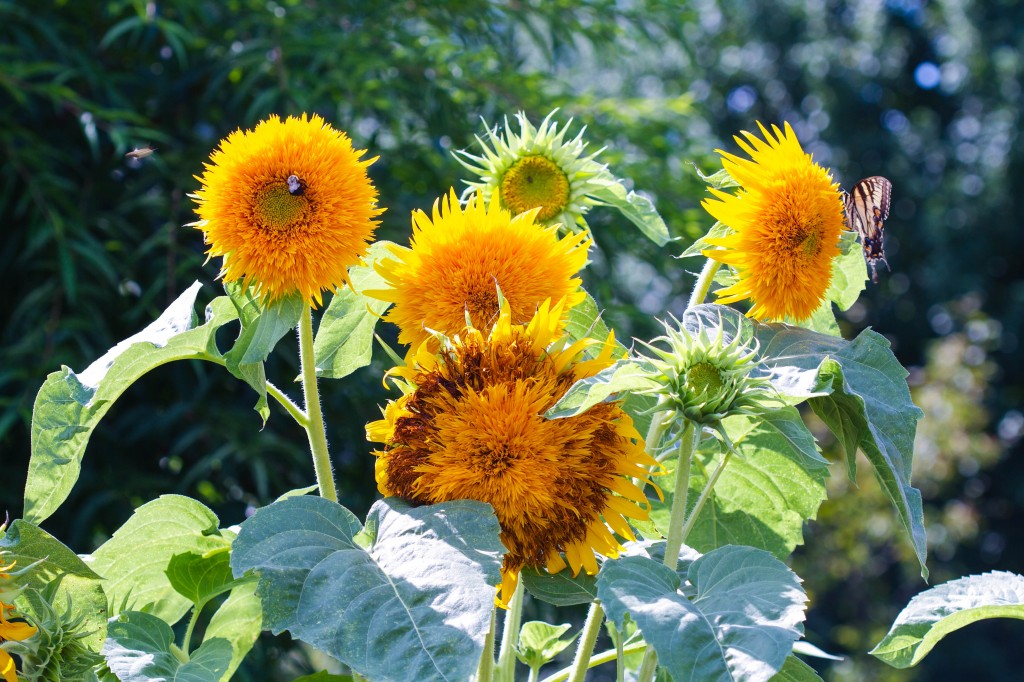 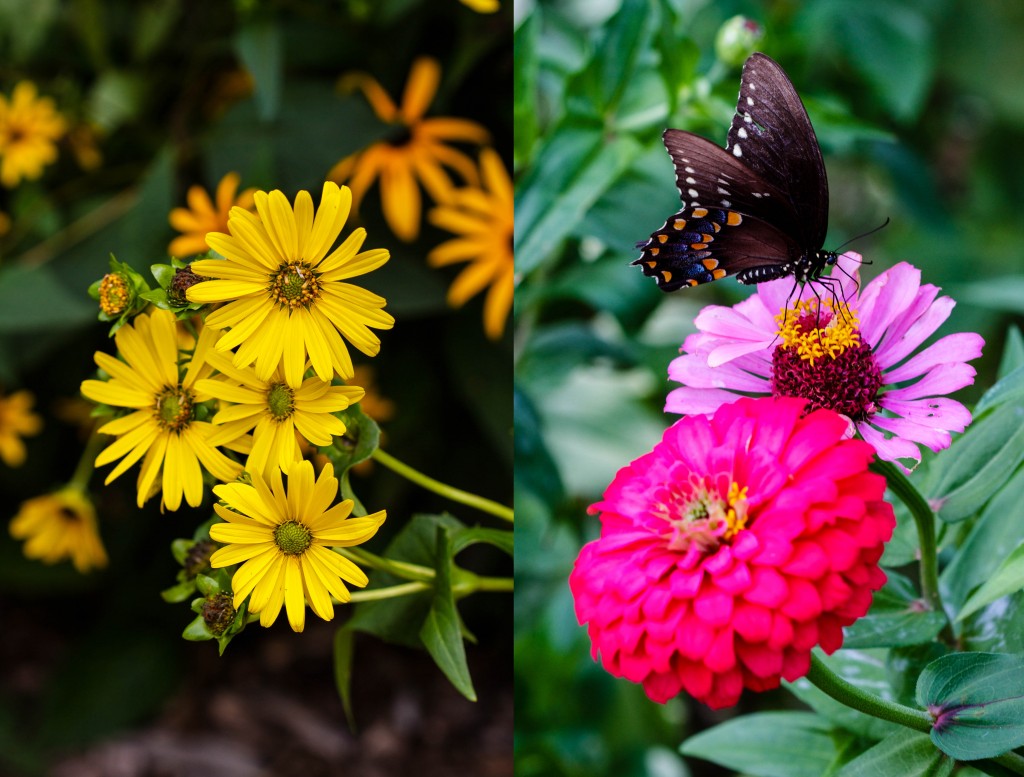 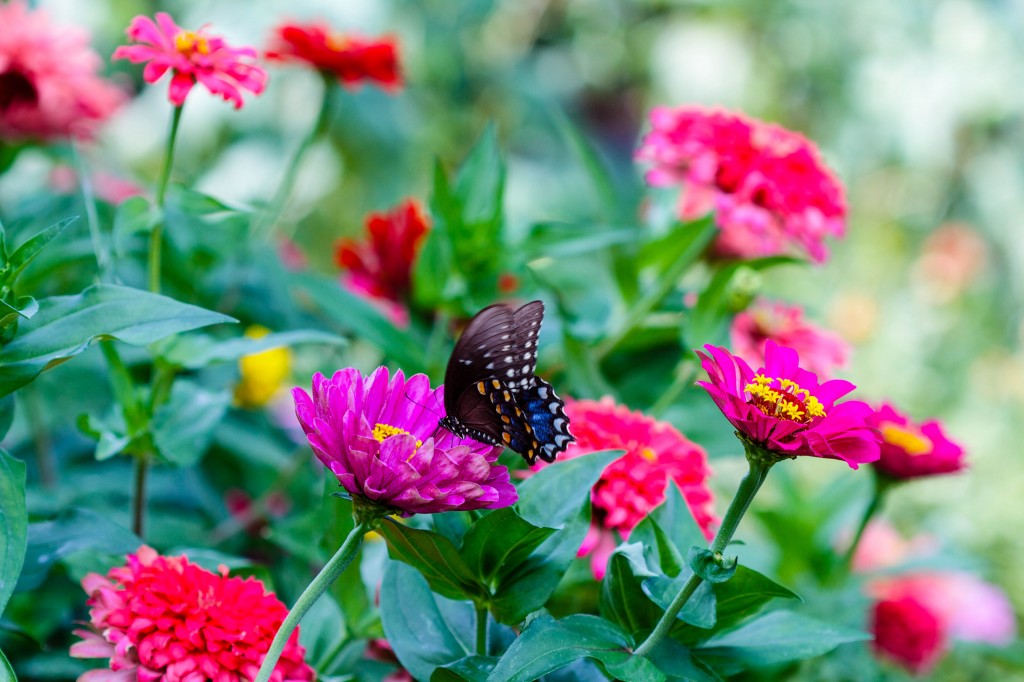 The Brooklyn Botanic Garden left us spellbound with all the natural beauty from the ponds with lilies to the Shakespeare Garden, Japanese garden, Gingko Tree Alley and more. 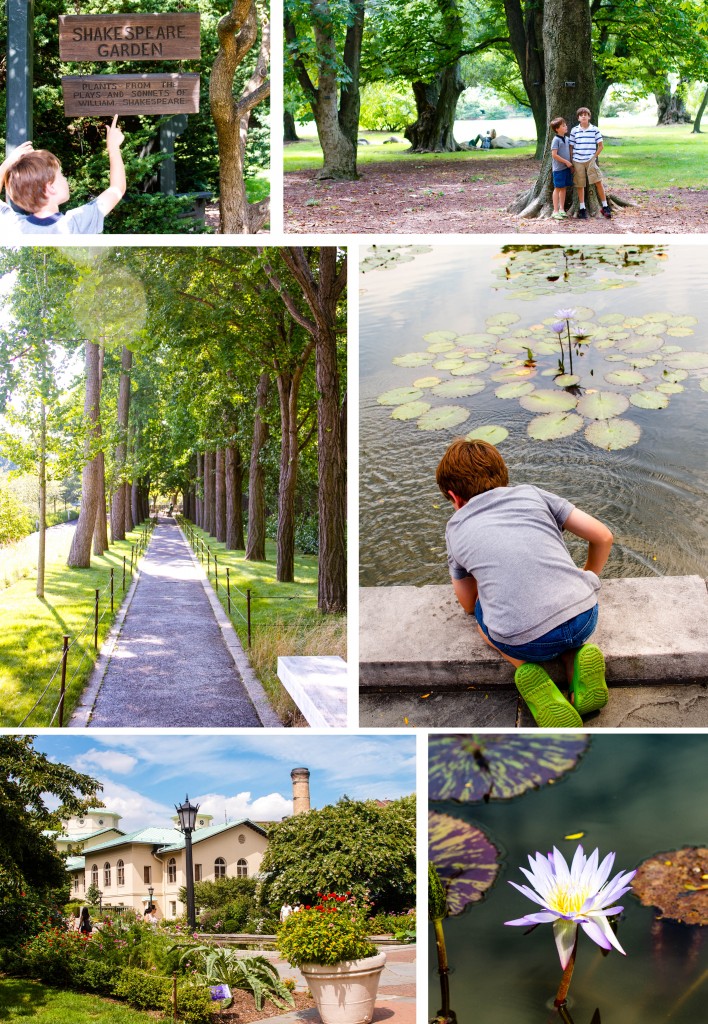 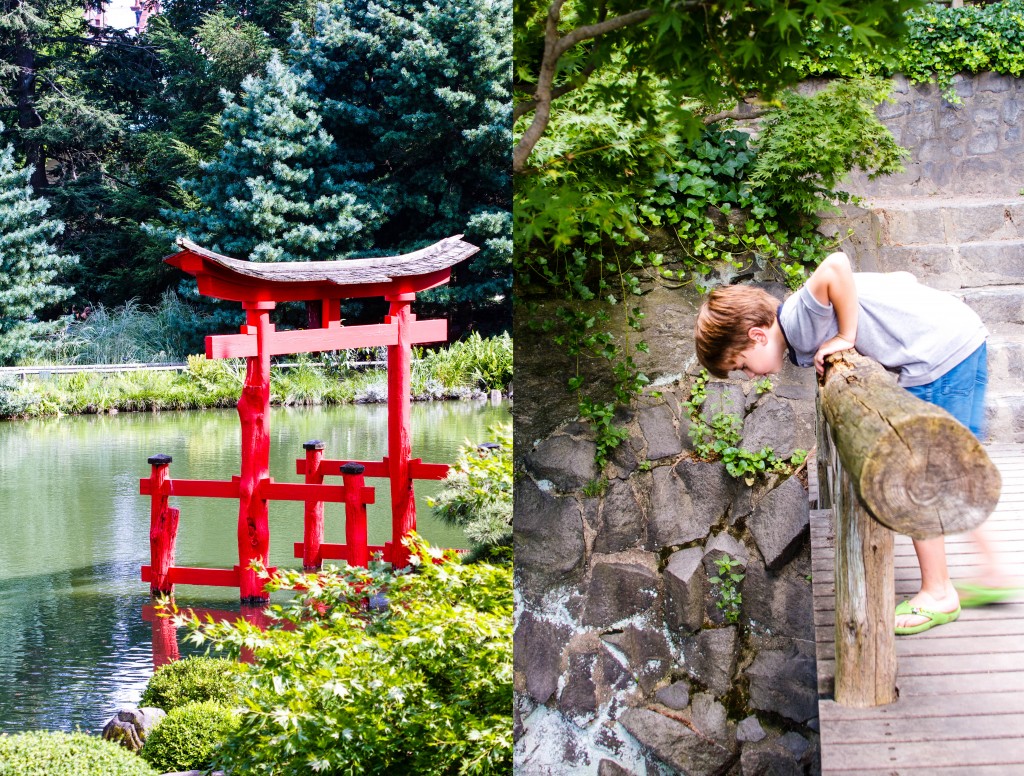 After our visit to the gardens we ventured to the Williamsburg section of Brooklyn for dinner at Fatty ‘Cue. 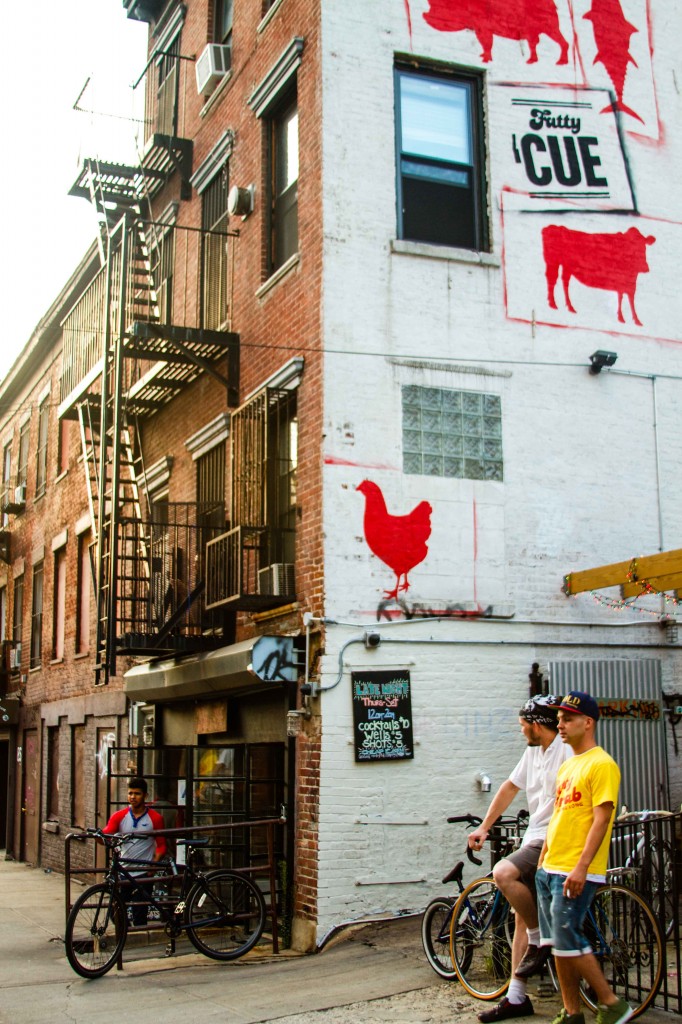 Williamsburg is home to ethnic group enclaves of Italians, Puerto Ricans, Dominicans and Hasidic Jews. Williamsburg is also a center of hipster culture, indie rock and a thriving art scene. Historically it has not been a center of wealth but lately there has been some upscale development catering to a wealthier population.

But Williamsburg still maintains its gritty ambiance which, compared to the more intimidating Manhattan, feels rather refreshing. 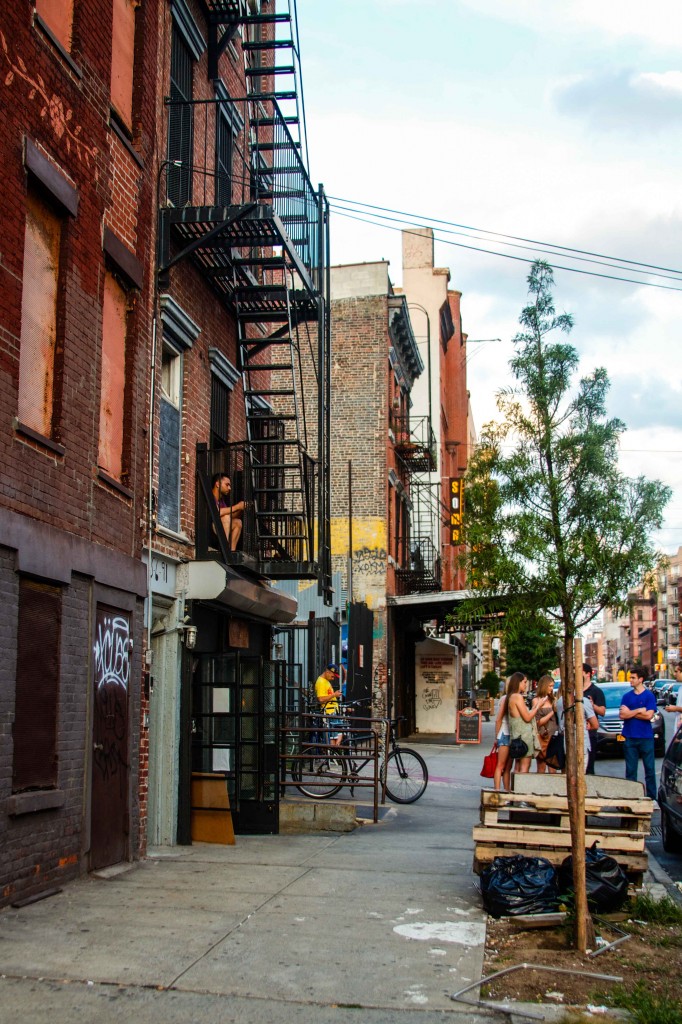 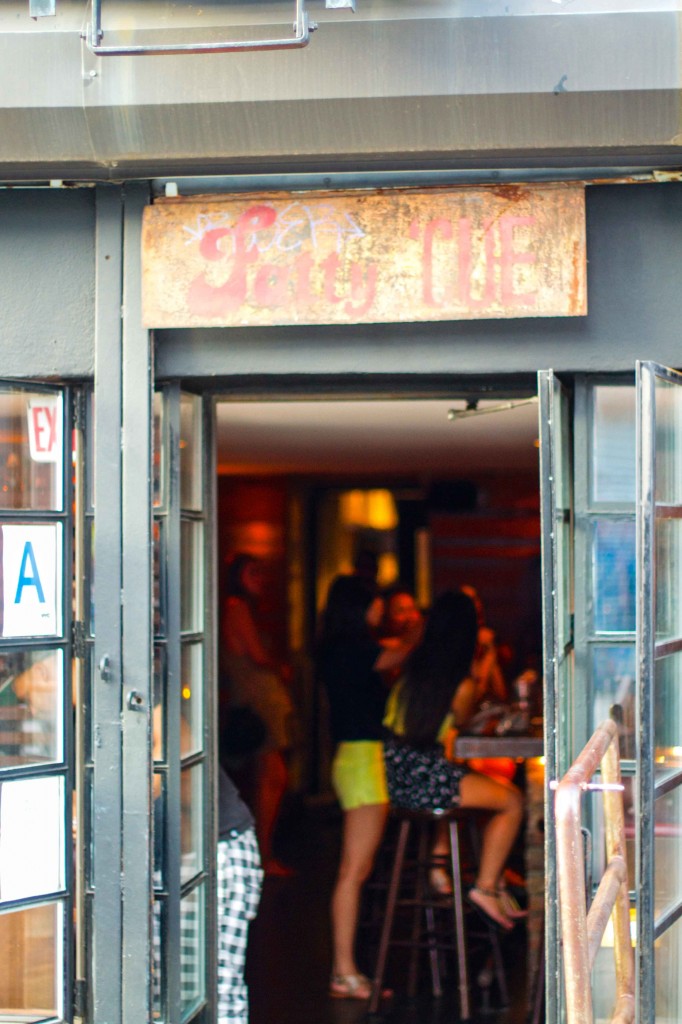 We chose Fatty ‘Cue primarily for the Half Pig Head they offer. We even arrived early in the hopes of snagging one of the only two orders they offer per day. I ordered the half pig head, much to the chagrin of my family, and was looking forward to trying the exotic offering. Unfortunately, about 20 minutes later, we were informed there would be no pig’s head after all. Evidently the special pig-head-oven had a glitch of some sort and we would have to try another day. Honestly, this explanation seemed a little suspect as you have to believe a pig’s head is not exactly cooked to order but must cook for several hours. So I’m not sure if the pig’s head got sold to another table for some reason or if the explanation was valid. Regardless, I was pretty disappointed about it given it was the primary reason we selected the restaurant. 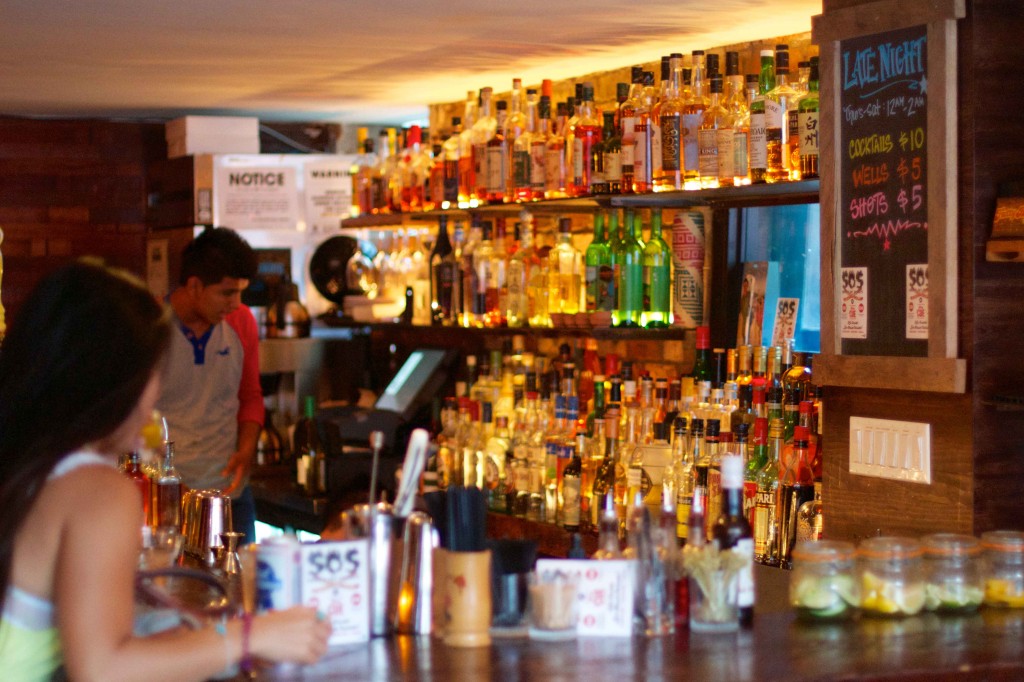 After the pig’s head disappointment we tried a few different dishes. The first was Giant Prawns with “master fat”. The correct way to eat the prawns is dipped in “master fat” (pork fat) and eaten with bean sprouts. Shellfish and pork fat. What more can we say? 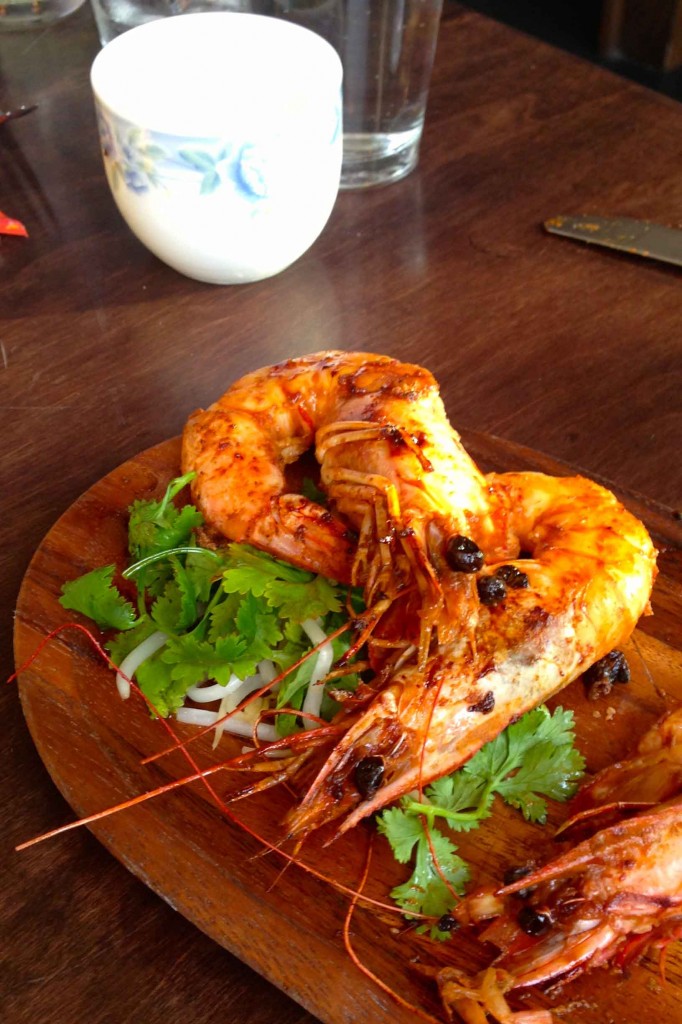 Next came the pork ribs, marinated in fish-palm syrup. 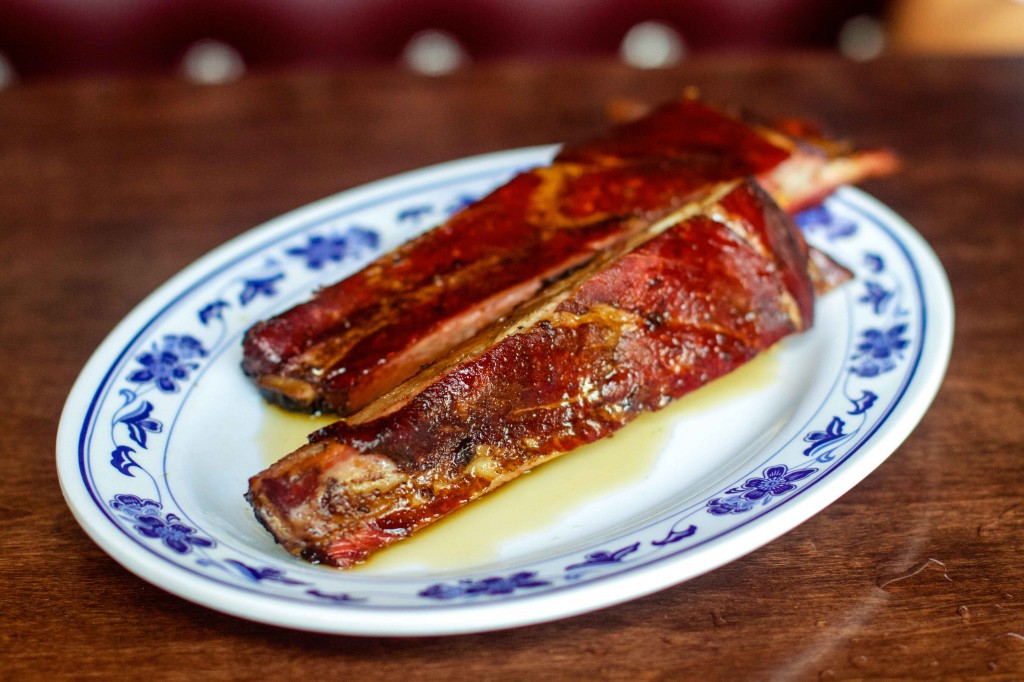 They were eaten within 12 seconds. 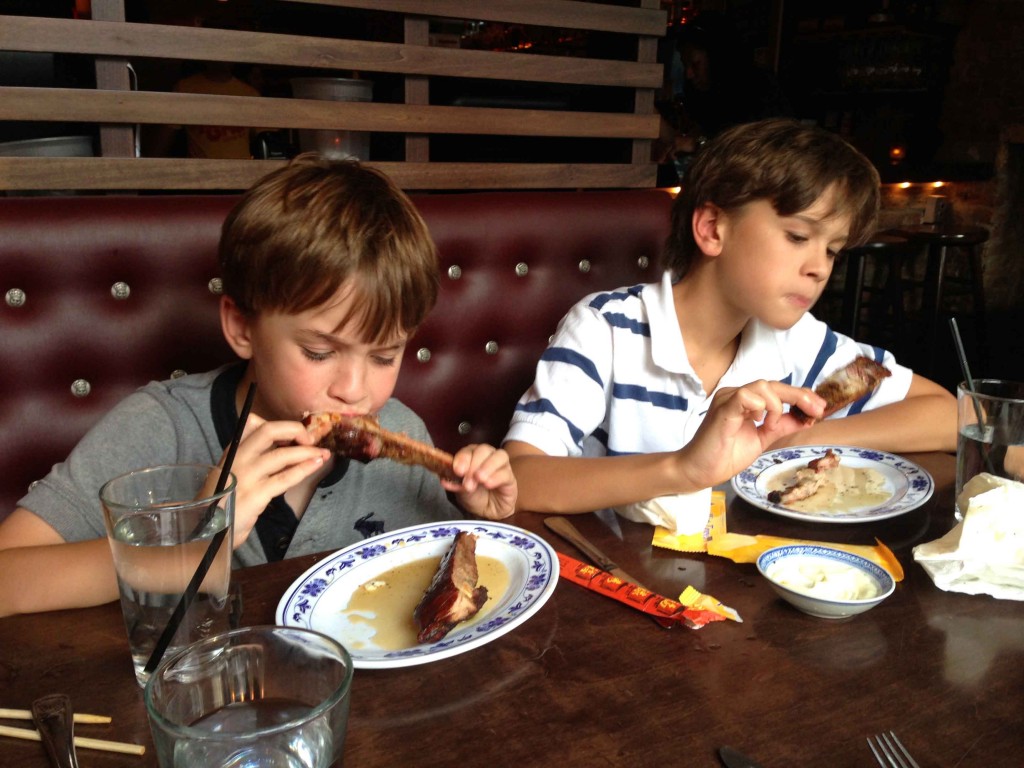 What followed was equally tasty. Beef brisket with lean and fatty cuts.

Finally, maple glazed pork shoulder with chili sauce and a side rhubarb kimchee. If I ever own a restaurant I swear it will have rhubarb kimchee on the menu. So unique and spicy!

The final verdict on Fatty ‘Cue was overall positive for the food in spite of the Half Pig’s Head debacle. Other aspects of the restaurant were less than thrilling. Our kids are old enough to behave in restaurants and they eat “adult” food so we don’t usually worry about whether or not a restaurant is “kid-friendly”. In this case, however, the restaurant environment is definitely kid-unfriendly. Fatty ‘Cue blasts hard-core, explicit hip-hop music. In my humble opinion, this has GOT to be the world’s worst music. Seriously. I’m sorry if that makes me uncool. But eating dinner and hearing n-word and f-bombs coming out of the speakers is not my idea of a good time. But that’s us. We took our kids to a hipster restaurant in Brooklyn so we can’t really complain we didn’t know it might end up this way. Word to the wise.

But if you like spicy, well-sourced meats, recipes that push the envelope on flavor and an edgy, dive-bar ambiance then Fatty ‘Cue may be right for you.

Our final stop of the day was Oddfellows Ice Cream Co. on Kent Avenue. It was definitely “odd” but in a most wonderful way. 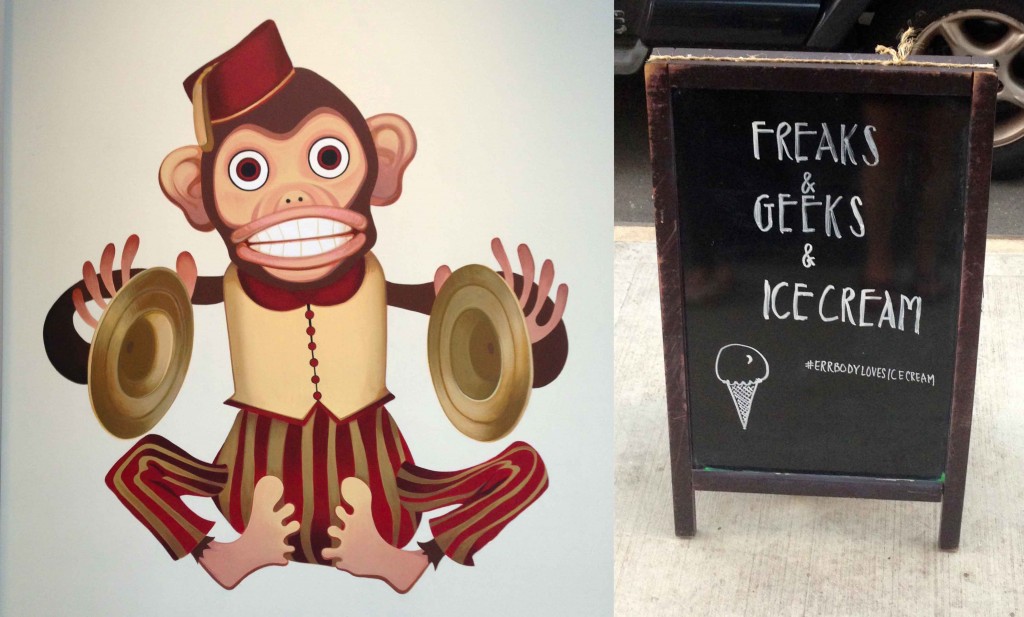 OddFellows serves up super premium small-batch ice cream from scratch. The milk they use is locally sourced and free of hormones and artificial additives. You will find THE most interesting ice cream flavor combinations known to man at OddFellows. The shop has a cool, funky vibe that fit well with the tantalizing offerings.

Only the most brave will try flavors like “Celery Sorbet”, “Beet-Goat Cheese-Pistachio” and “Extra Virgin Olive Oil”. This boy got three, yes three, scoops of “Chorizo Caramel” which he devoured like a boss. Later it was revealed he did not fully comprehend chorizo is a type of sausage. But he’s an adventurous eater so I don’t doubt he would have tried it even if he had. I mean, the child has eaten duck feet for goodness sake! 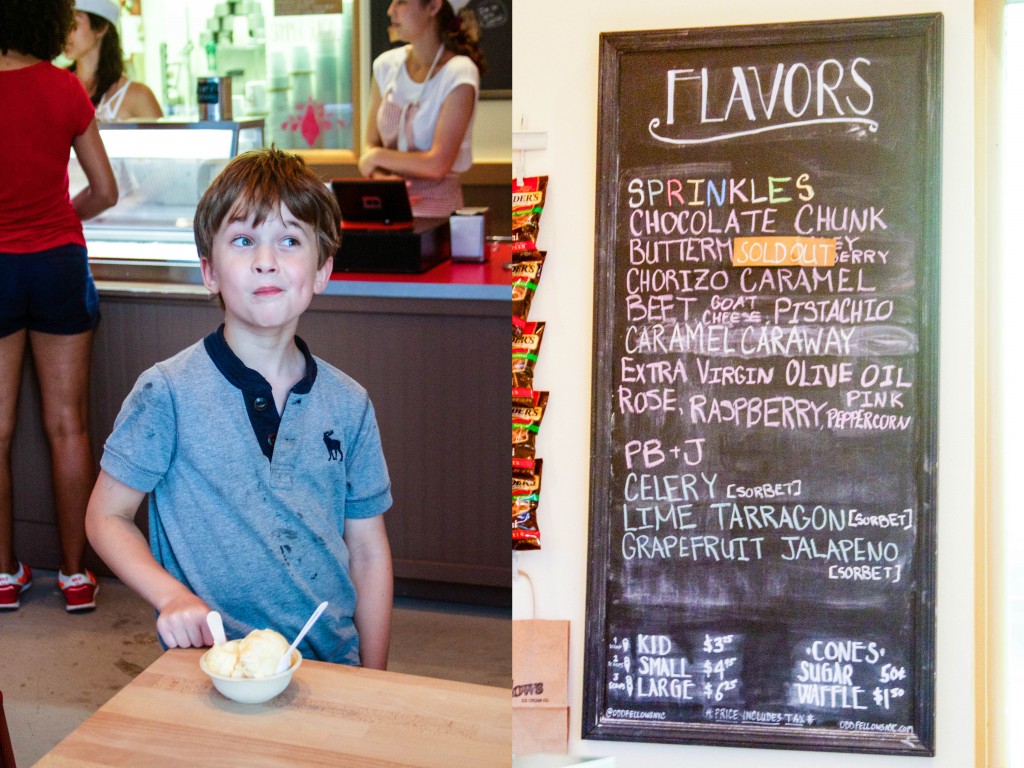 Oddfellows is in view of the new Freedom Tower. Love. 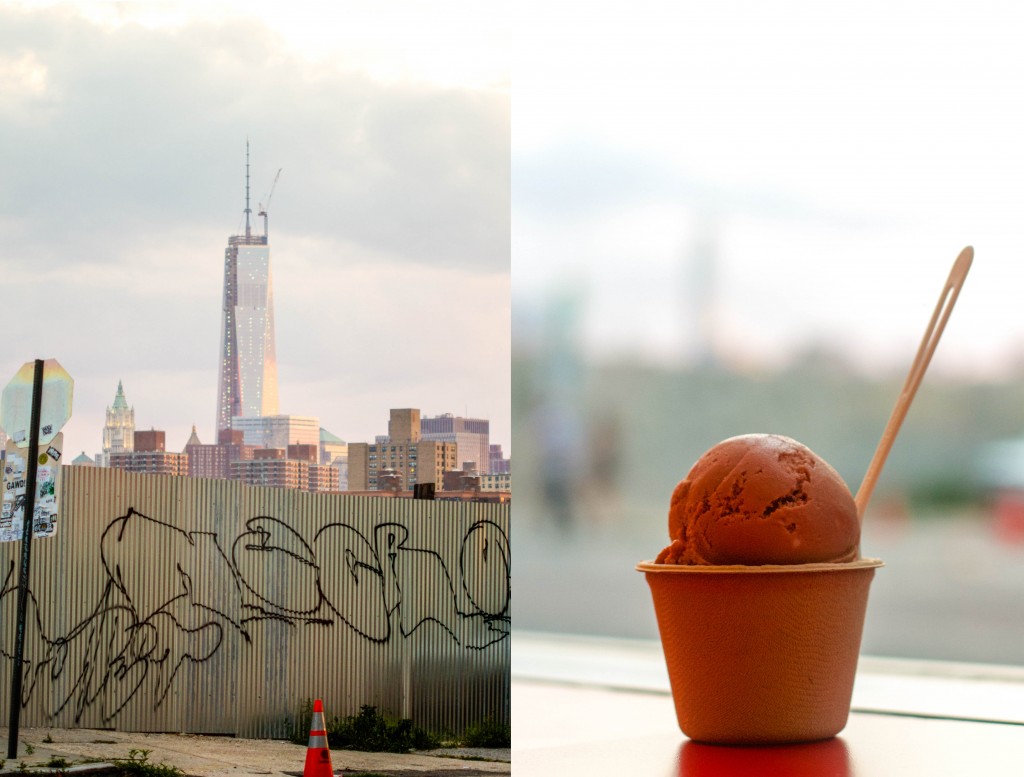 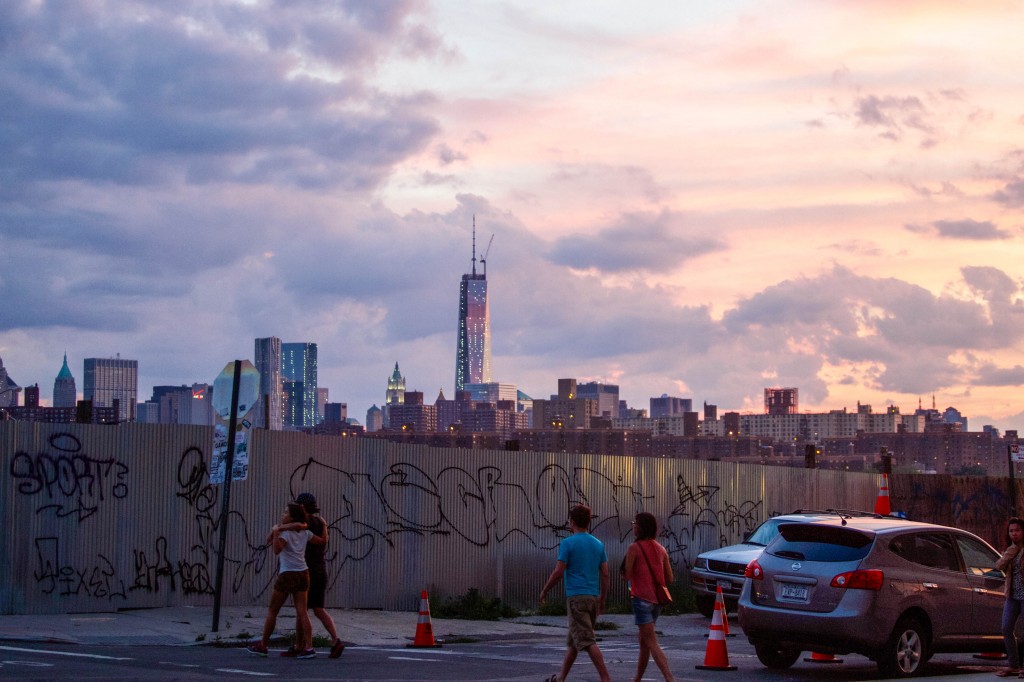 And it’s not far from the most gorgeous views of the Manhattan skyline. Seeing the beloved skyline from a different vantage point with the sun setting behind it is worth the trip to Brooklyn alone. 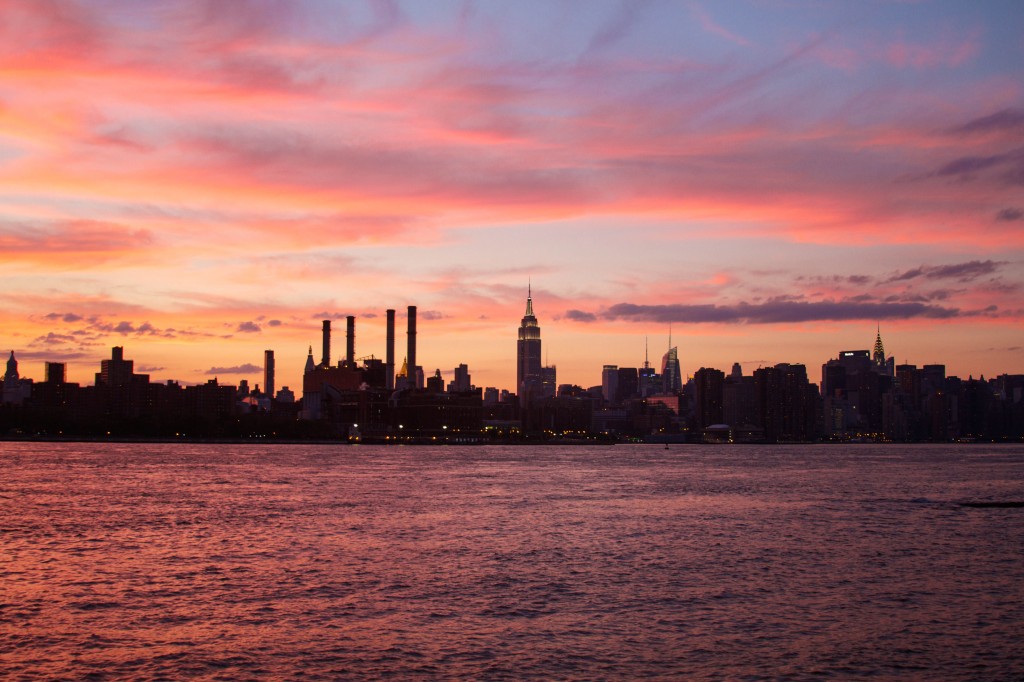