(G’s New Year’s Paleo Resolution Giveaway is now closed. The three winners are listed at the end of this post.)

About two years ago, my wife Lea started “eating Paleo” in an effort to alleviate some health-related issues which she believed were possibly caused by certain kinds of food, like gluten. Partly to be supportive, and partly because she does most of the shopping and all of the cooking, I went along. I mean, really…what choice did I have?

To my surprise (admittedly, I was skeptical), the new way of eating proved wildly successful for her and for myself. When combined with a regular regimen of Yoga, walking, and occasional sprinting, I shed the pounds quickly! Without much real effort and a lot of tasty meals, I was able to see a “1” followed by a “6” on my bathroom scale for the first time since I was in high school over two decades earlier.

I was very proud of myself; I looked good, and I felt great. I celebrated my discipline at being able to cut out sweets and bread, and to eat well at work as well as at home. My wife applauded my resolve. Things were going great! Until…

The fall off the “paleo wagon”

…Something happened. I don’t know when, but it happened just the same. Slowly but surely, the carbs returned – a little bread here, a slice of pizza there. And of course, there was the beer. As you may have noticed from some of my beer reviews, I love the stuff. So…bread, pizza, beer…and two years later, it’s all back, and then some. 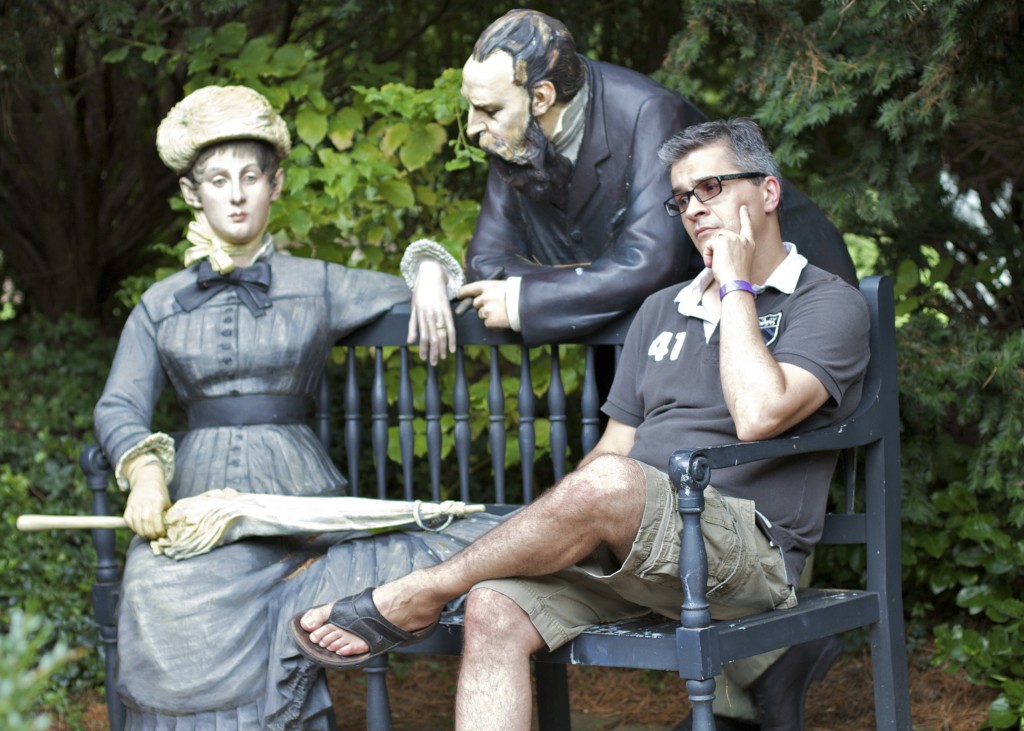 G contemplates his fall off the paleo wagon. (At “Grounds for Sculpture” in New Jersey)

Don’t get me wrong, though. I’m not fat. I don’t think I’m even chubby…but I am overweight, and I don’t like it. So, in an attempt to regain my previously trim physique, I am willfully joining my wife on the Strictly Paleo Plan for the month of January 2013. I’m hoping to not only lose weight and get back in shape, but to re-establish those good food and exercise habits that worked so well when we first “went Paleo” back in 2010.

Wish me luck! I’ll need it…

Now for a little giveaway. (For continental U.S. residents only)

We are giving away a few things we think will help you follow the Strictly Paleo Plan or Whole30. These products were not given to us as part of a promotion. We bought these things ourselves because we truly think they are terrific and we want to celebrate the New Year by giving them away to a few of our readers.

There will be three winners.

Winner #1 will receive: “It Starts With Food” by Dallas and Melissa Hartwig. One of the great things about this book is the focus on health rather than getting into the whole evolutionary rationale for paleo eating. Lea has discussed this previously and I agree more people can be reached by sticking with the science and health results.

Winner #2 will receive: “Practical Paleo” which is a customized approach to health and a whole-food lifestyle by Diane Sanfilippo. The book contains 30-day meal plans and over 120 recipes that are gluten, grain, legume, dairy and refined-sugar-free. Like “It Starts With Food”, “Practical Paleo” approaches the paleo diet purely from the point of view of creating optimal health through food rather than focusing on evolutionary rationales.

Winner #3 will receive: two 7.8 oz jars ofGrass-Fed Ghee from Pure Indian Foods. This stuff tastes amazing and the fact the butter oil comes from grass-fed cows means it is truly a super-food.

Contest ends Thursday, January 3rd at midnight EST. Winners will be chosen at random from the comments section and emailed for their shipping address.

Good luck and best wishes for a great 2013. We will be providing updates with progress as well as a few sample meal plans. In the meantime, Lea has created a new Pinterest board for Strictly Paleo/Whole30 recipes. I know she will be adding a lot of recipe finds so you might like to check that out for food ideas – especially if you have a paleo resolution.

Congratulations to our winners!