But when I say crabby, I don’t mean curmudgeonly or cantankerous, although I’ve occasionally been accused of both.

I mean I love to eat crabs. Steamed crabs. 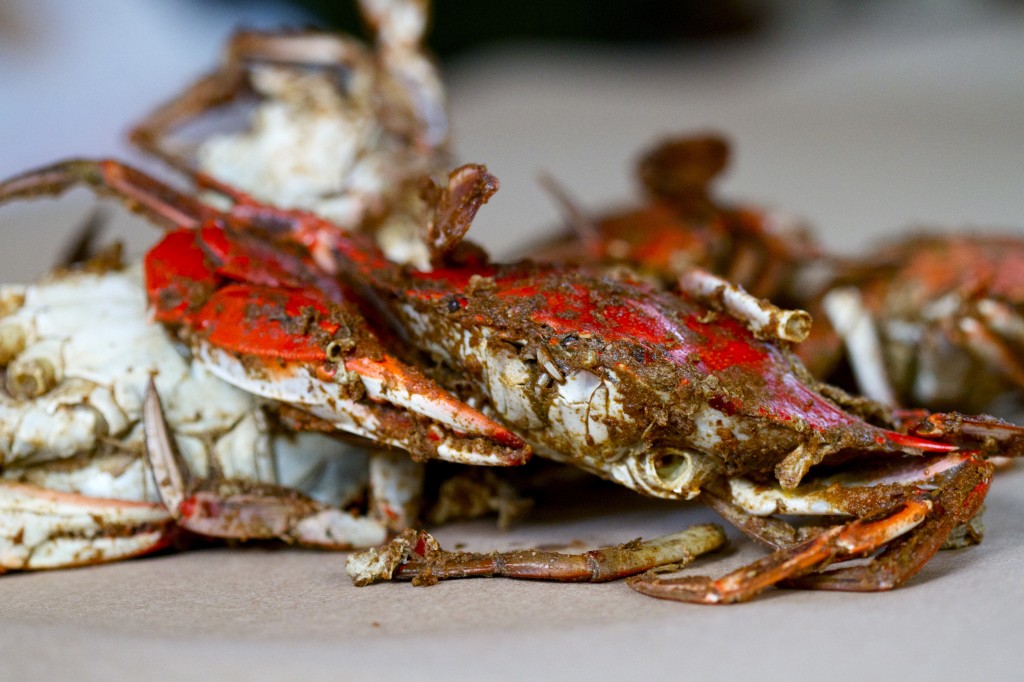 Serve’em up with some ice-cold beer on a picnic table covered with old newspaper and in my humble opinion, you’ve pretty much achieved Nirvana.

But that’s because I’m from Maryland, where steamed crabs are more than food – they’re a way of life. Marylanders have been gorging themselves on steamed crabs since the first settlers paddled up the Chesapeake Bay in 1634, and even before that if you consider Native American tribes like the Nanticoke and the Powhatan.

There was a time when hardly anyone outside of the Delmarva Peninsula – that’s where Delaware, Maryland, and Virginia all collide on the eastern side of the Chesapeake – ate much crabs, but that’s changed in recent years. It’s not hard to get a decent crab cake in most American cities nowadays, but steamed crabs? That’s a different story!

So whenever Lea and I visit my Mom & Dad on Maryland’s eastern shore, we make a point to have steamed crabs. Lea, a native Texan, had never had steamed crabs before she met me, but after 15 years of marriage she can tear into them with gusto! She also likes that eating steamed crabs fits in well with her lower-carb, paleo diet.

Now…a little bit about the crabs, themselves. The ones that we eat in Maryland are called Callinectes sappidus, which means “tasty beautiful swimmer” in Latin. But that’s a mouthful for a Marylander, so we just call them “Blue crabs,” which makes sense because before they get tossed in the pot they actually are…blue.

We like to think of blue crabs as our own, but the truth is they’re found all the way from Nova Scotia down into the Gulf of Mexico and even as far south as Argentina! Good thing, too, because due to over-fishing, most of the crabs we eat are imported from Louisiana! No matter, they’re still blue crabs, and nobody does them like they’re done in Maryland…sorry, Virginia!

Now if you’re going to do steamed crabs right, you will need Old Bay Seasoning. A German immigrant named Gustav Brunn created Old Bay in Baltimore in the late 1940’s, and it fast became a staple ingredient for steamed crabs. In 2006, the McCormick Spice Company – also originally from Baltimore – acquired the recipe and it’s now widely available. (According to McCormick, Old Bay is gluten-free!) 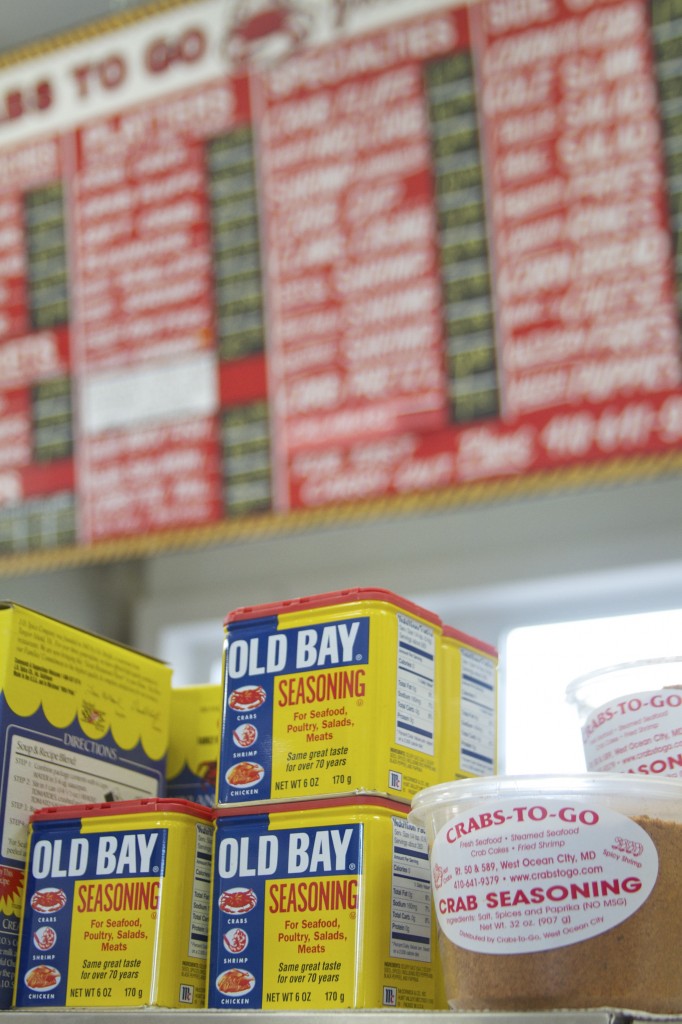 When we visit my folks in Ocean City, we usually buy crabs at a local joint like this one: Crabs-to-Go. 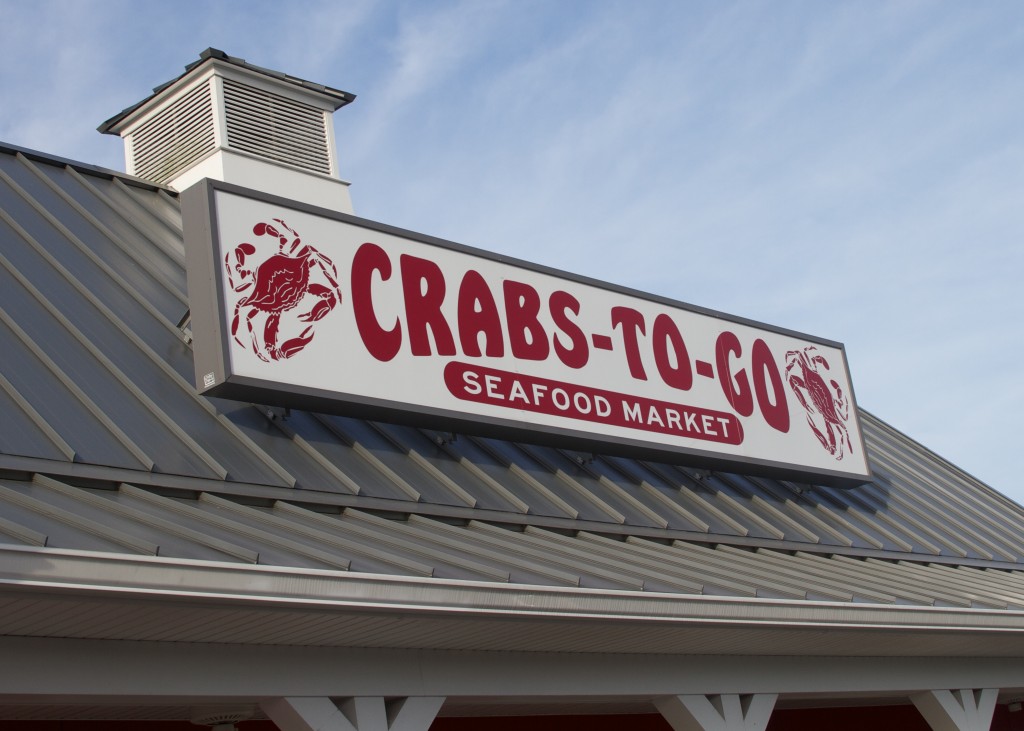 Crabs-to-Go is a very busy place, especially during the summer. Most of the patrons want steamed crabs, so the giant steam pots are running full steam (pun intended) around-the-clock. 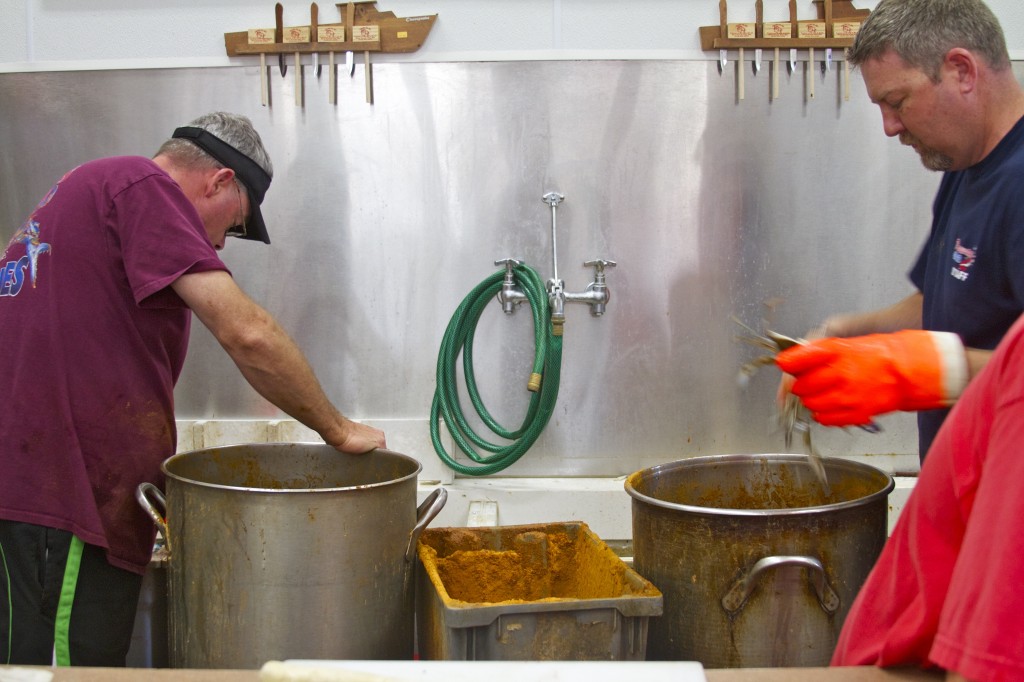 It’s best to place your order in advance to avoid a long wait, and to check on the price. Like a lot of seafood, the price fluctuates with market conditions. 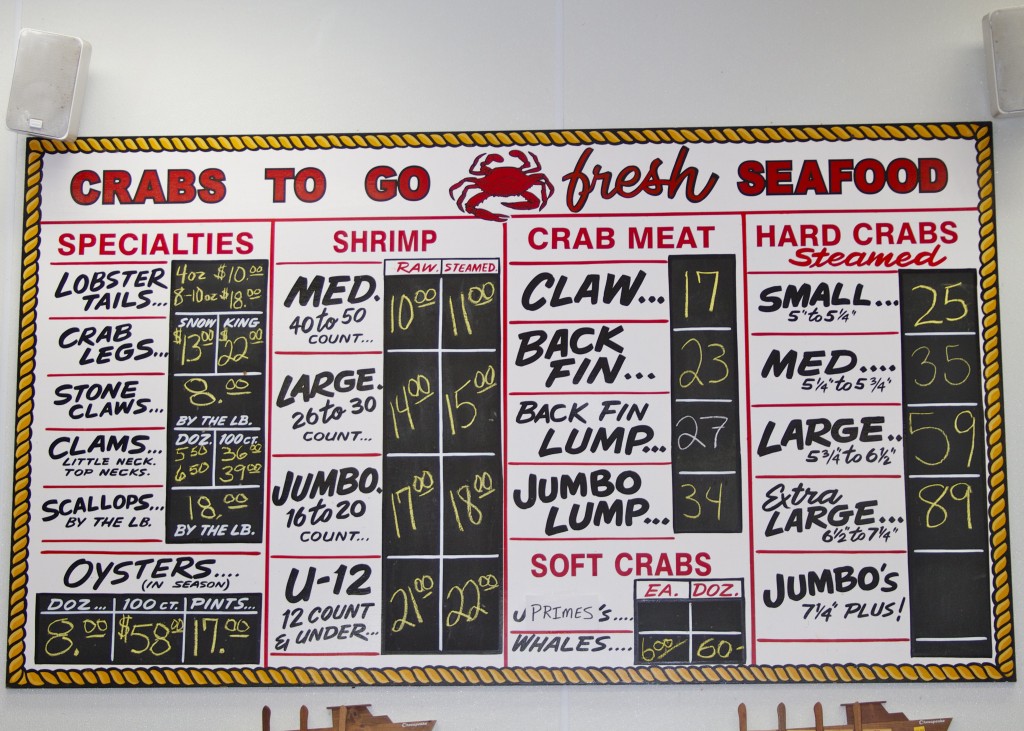 Steamed crabs are generally sold by the dozen, or by the bushel. What’s a bushel, you say? That depends on the size of the crab; for example, if you’re buying Jumbo crabs (6 – 6.5”” across the body), then a bushel can be anywhere from 60-72 Jimmies. Jimmies?? What’s that? Well, that’s what crabbers call an adult male blue crab; adult females are called “sooks”. Jimmies are larger and meatier, so they’re better for steaming. Sooks are “picked” by commercial processing plants and used as fresh or pasteurized meat.

Once we procured our order from Crabs-to-Go, we grabbed a large swath of industrial brown paper to use as a tablecloth (steamed crabs are very unpretentious), and headed home for our feast. 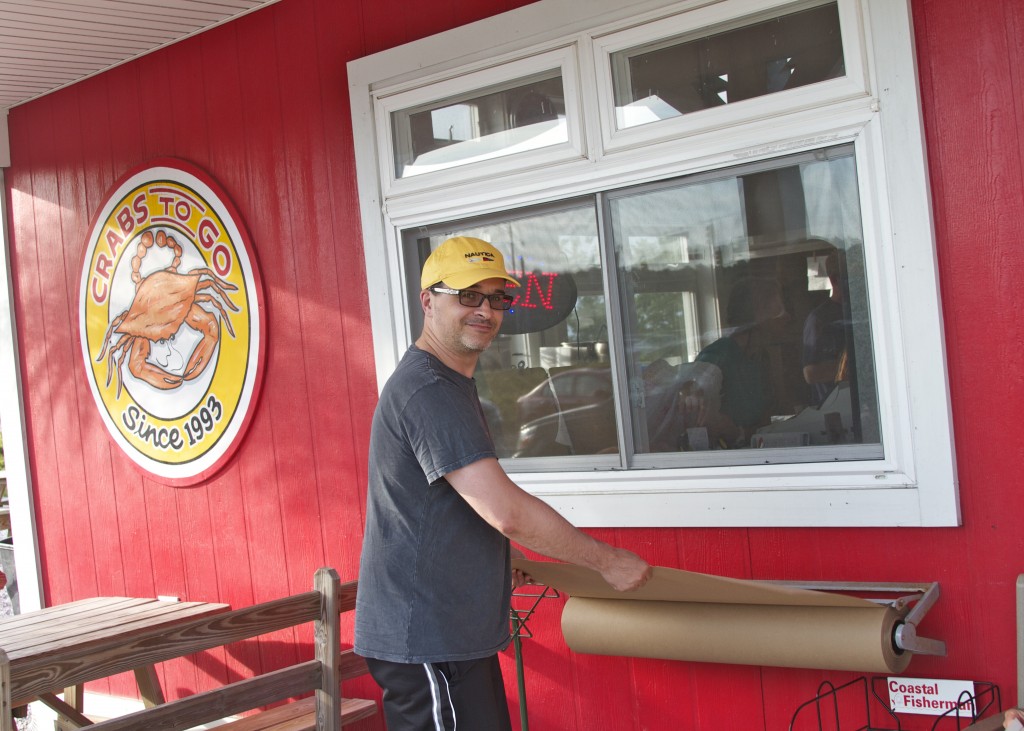 After clearing off the table, we laid down industrial brown paper and dumped out the crabs. The smell of fresh, steamed crabs and Old Bay seasoning was both overpowering and intoxicating. (Note the Redbridge Gluten-Free Beer!) 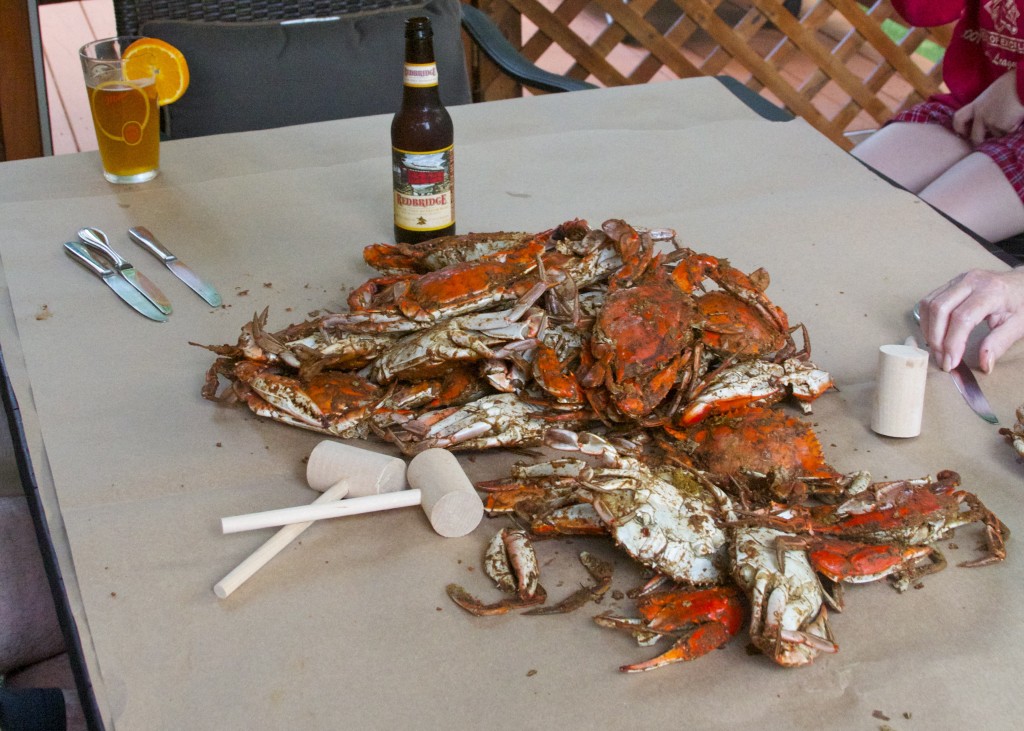 Our oldest son was not too thrilled by the sight of steamed crabs. He thought they looked like giant red spiders. 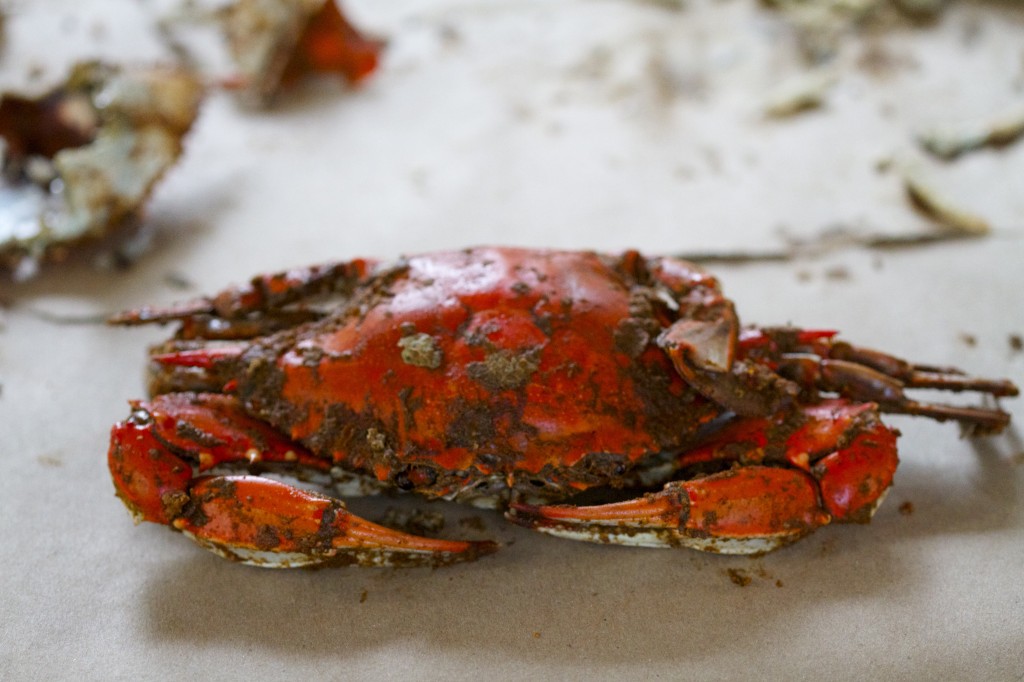 I’m used to them, but I have to admit…they kinda’ do! 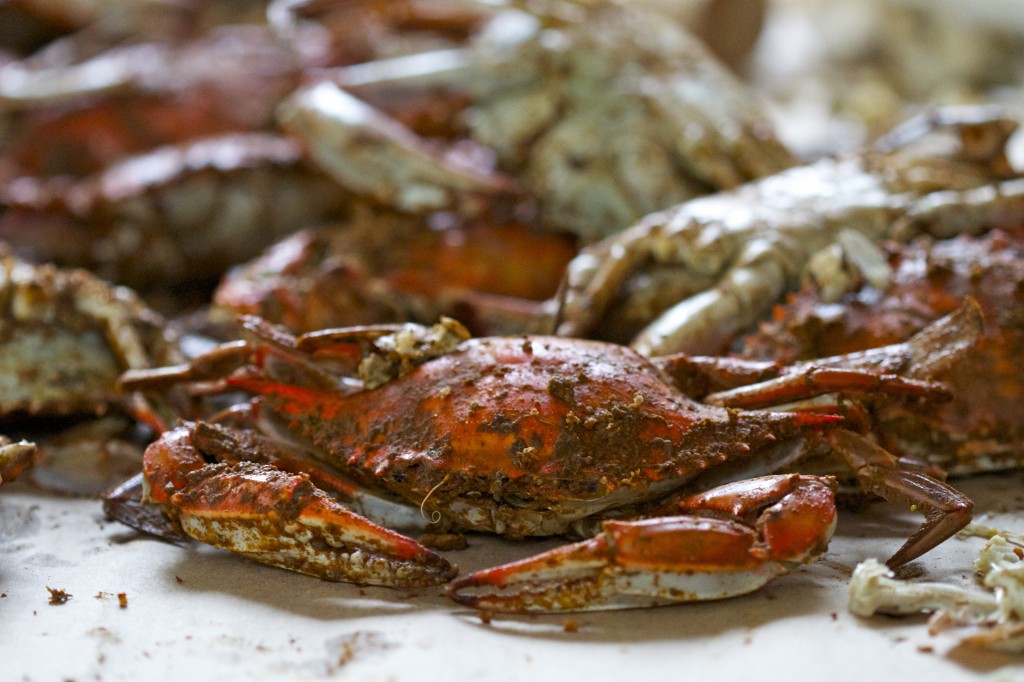 To appease Ben’s sensibilities we bought him fried calamari which he ate INSIDE the house, far away from the horrifying crabs. 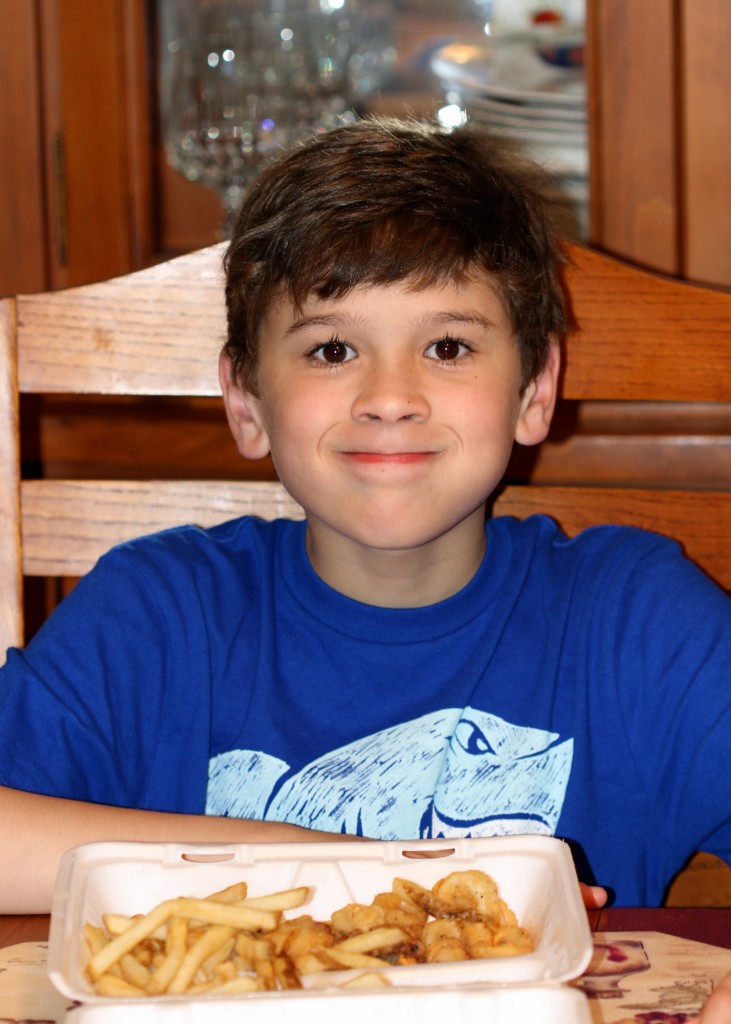 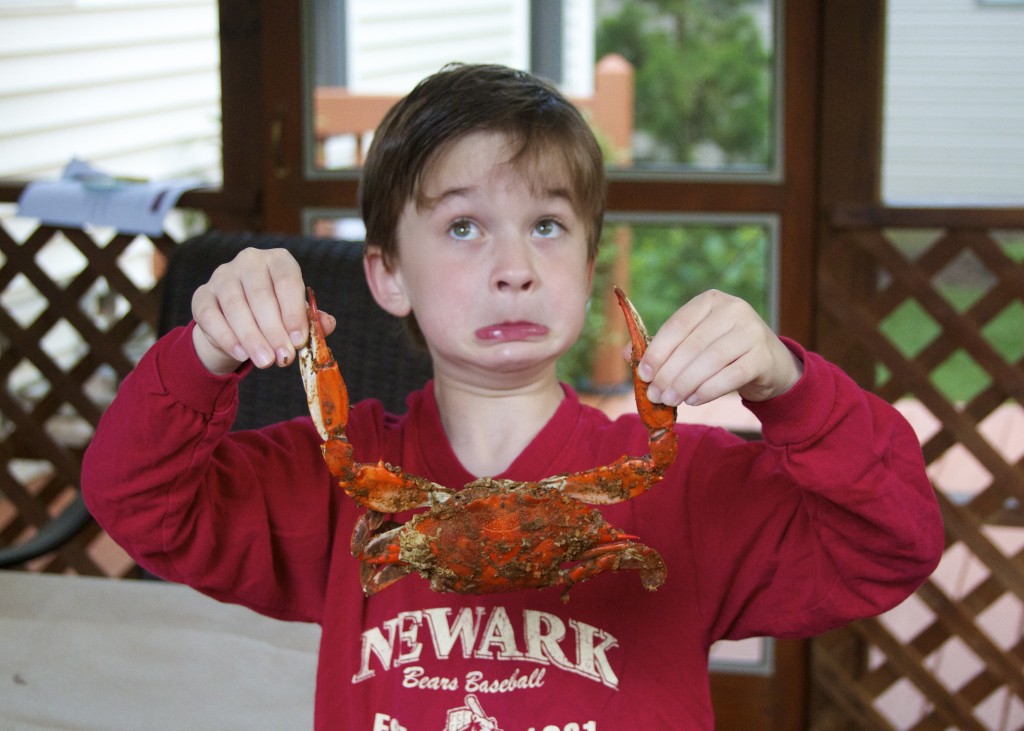 After we told him you eat crabs by smashing them with a wooden hammer his enthusiasm reappeared. 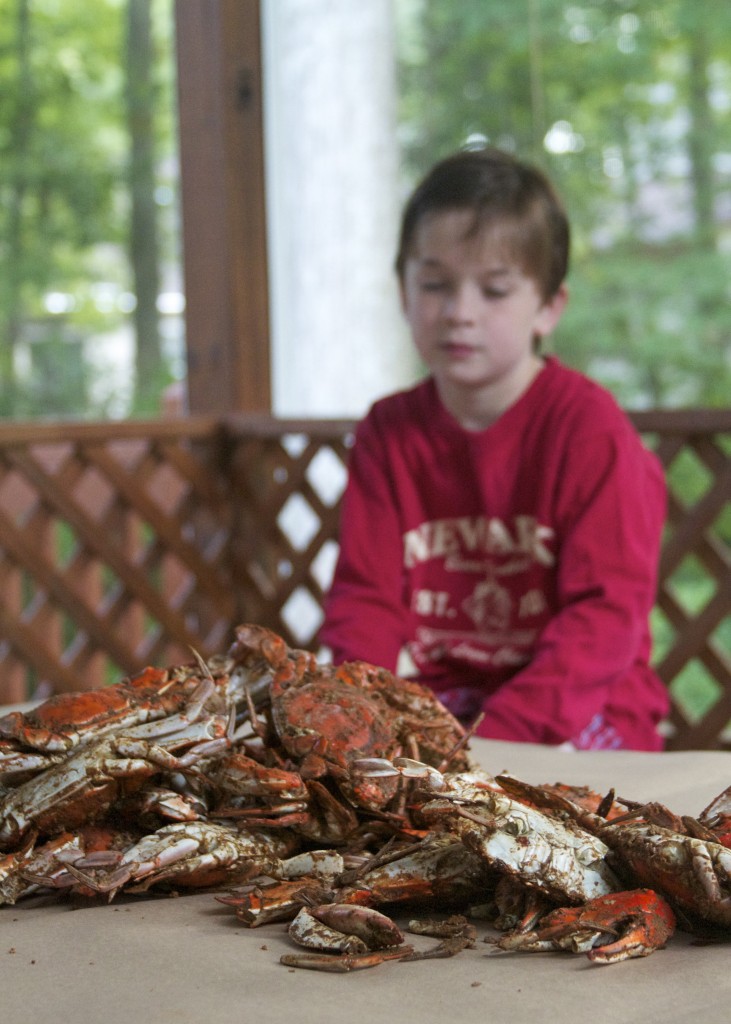 The first thing you do when eating steamed crabs is to tear off the large, front arms at the shoulder and crack open the claw. 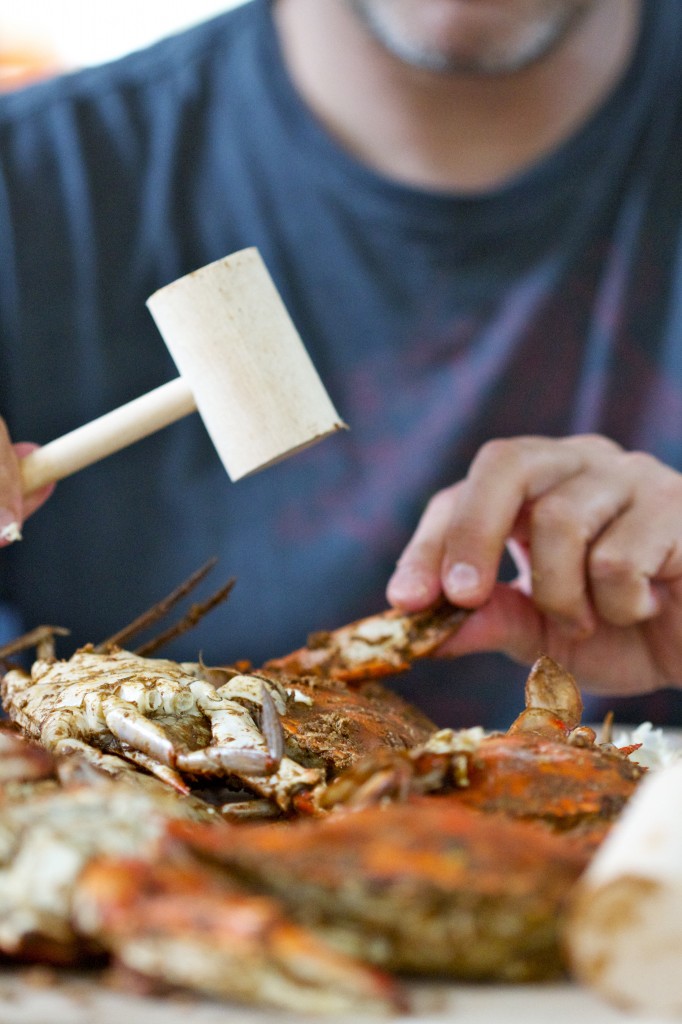 There’s a lot of yummy meat in there!

After you’re done with the claws, it’s time for the back fin crabmeat – the BEST tasting part of the crab!

First you turn the crab over and lift up the “apron” which looks like a tab. 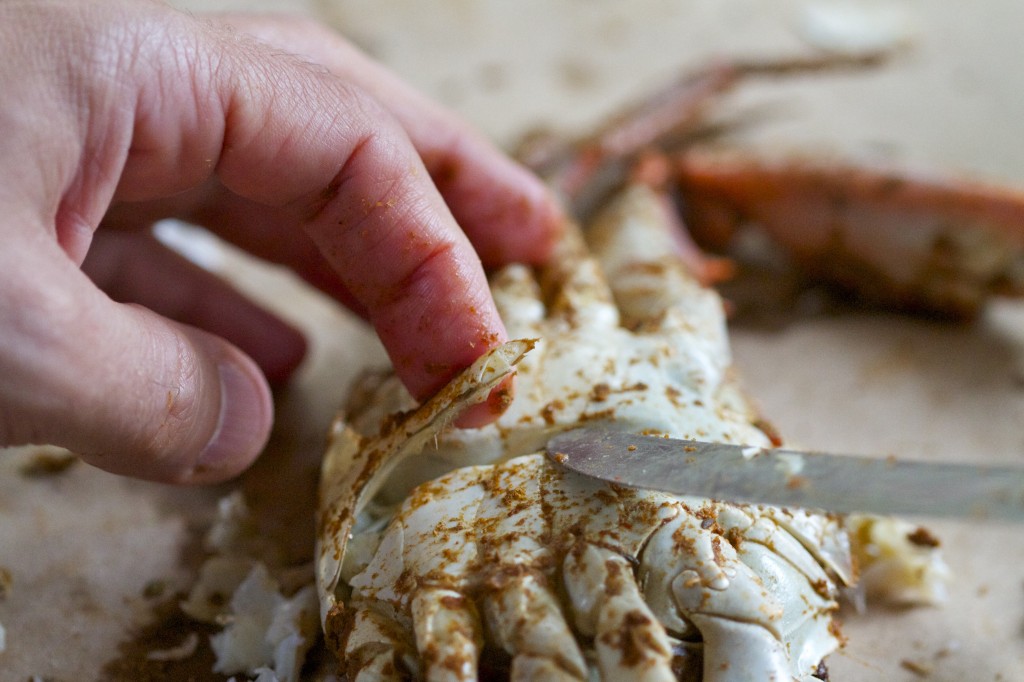 Then insert a knife (or use your hands) between the top and bottom halves of the crab’s body, 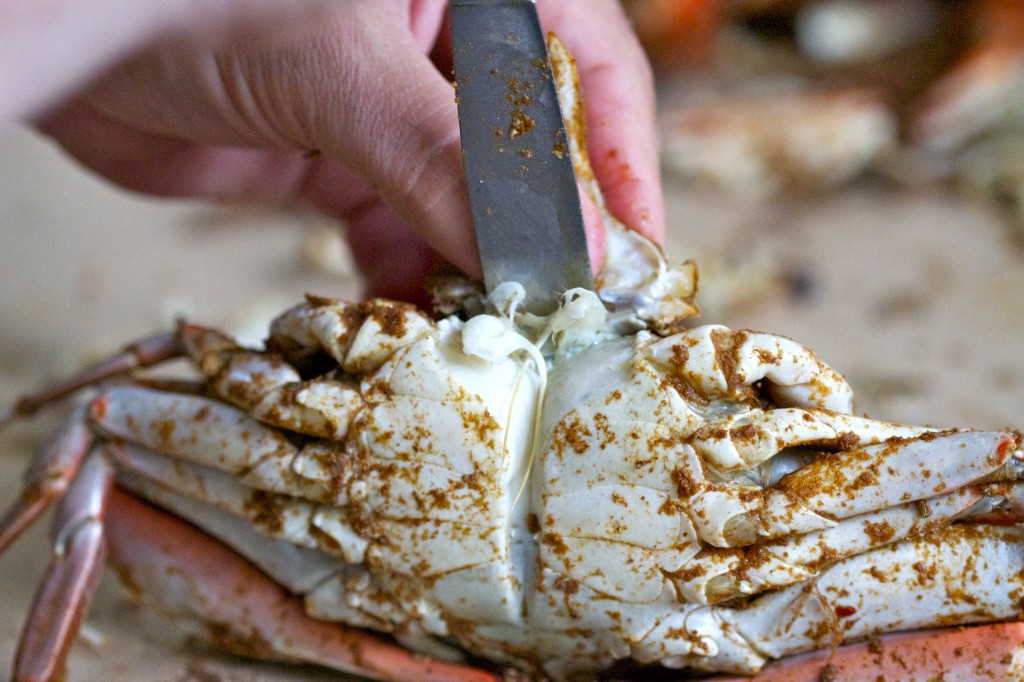 and literally yank it apart. 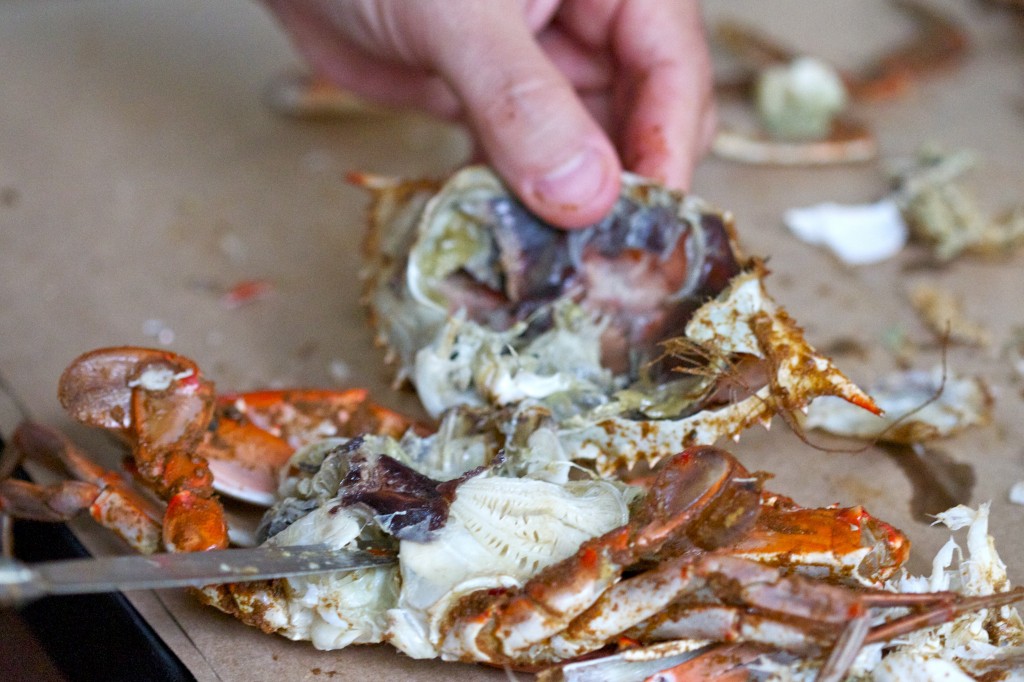 Then cut the crab in half.

You are getting closer to your reward. 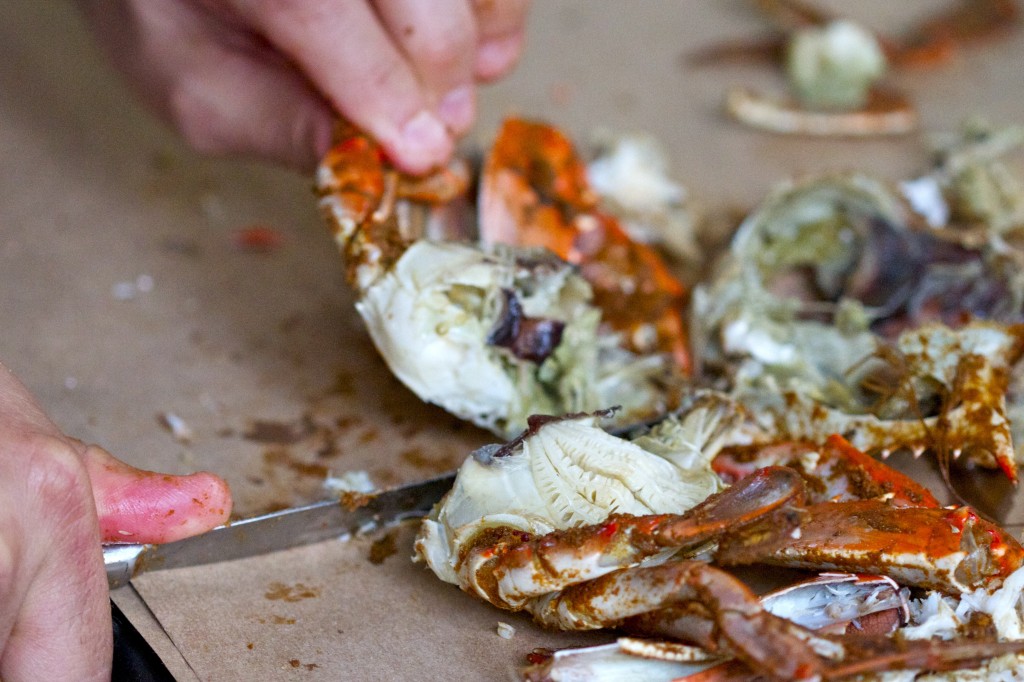 If you’re a die-hard lover of steamed crabs, like my mom, 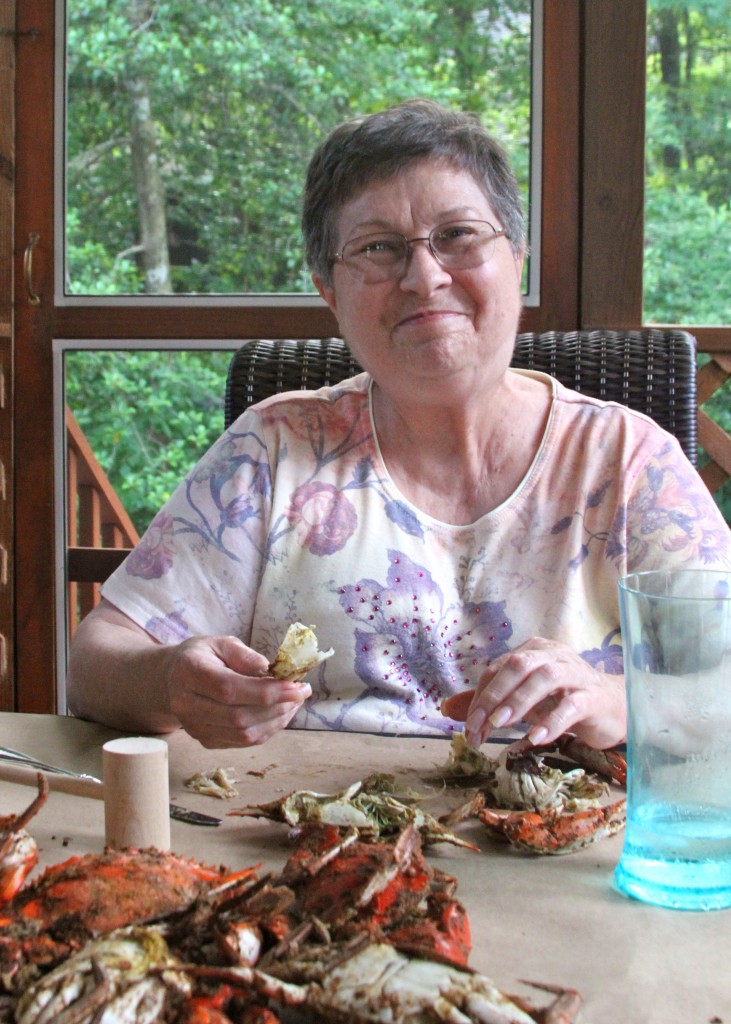 If you don’t want to eat “the mustard,” then go for the meat. Once you have cracked open the shell, scrape off the squishy, cone-shaped things; these are lungs, and they’re not too tasty. Underneath the lungs is a hard, pearly shell, and under that shell is the backfin crabmeat. It takes some effort, but believe me, it’s worth it! 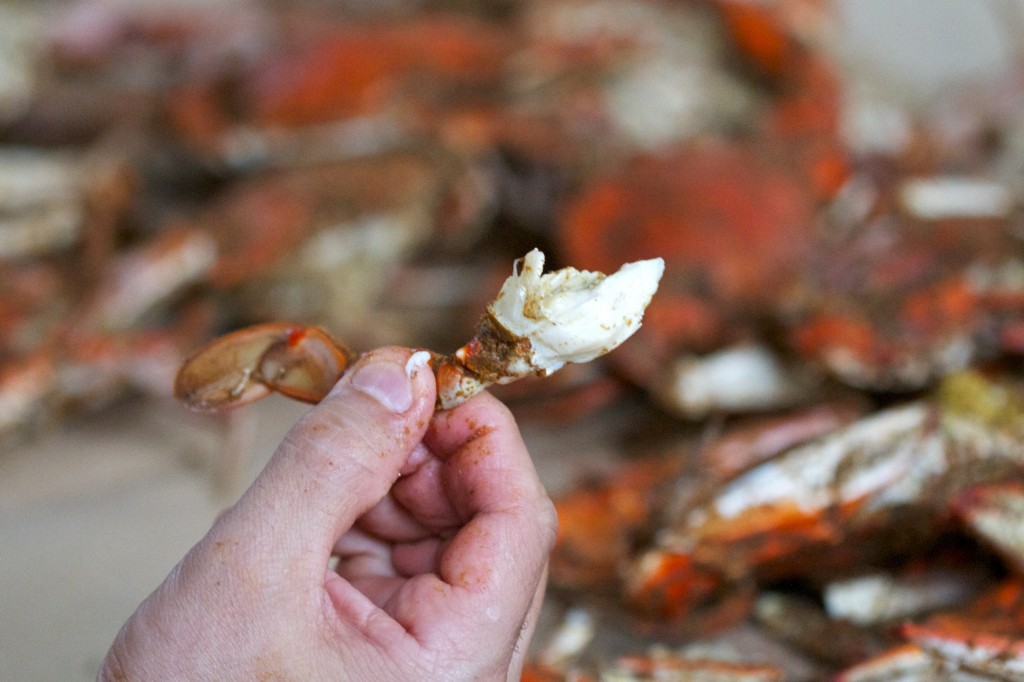 After that, pull all the smaller legs out of the torso and suck the meat and juice out of the shoulder. Then you’re done! Toss the remains of the carcass into the scrap pile, sip some beer, and grab another crab!

I usually call it quits after about 6 or 7 crabs, but I’ve been known to occasionally eat more. When everyone is finished, you should have a nice big pile of dead crab parts, and a very full stomach. 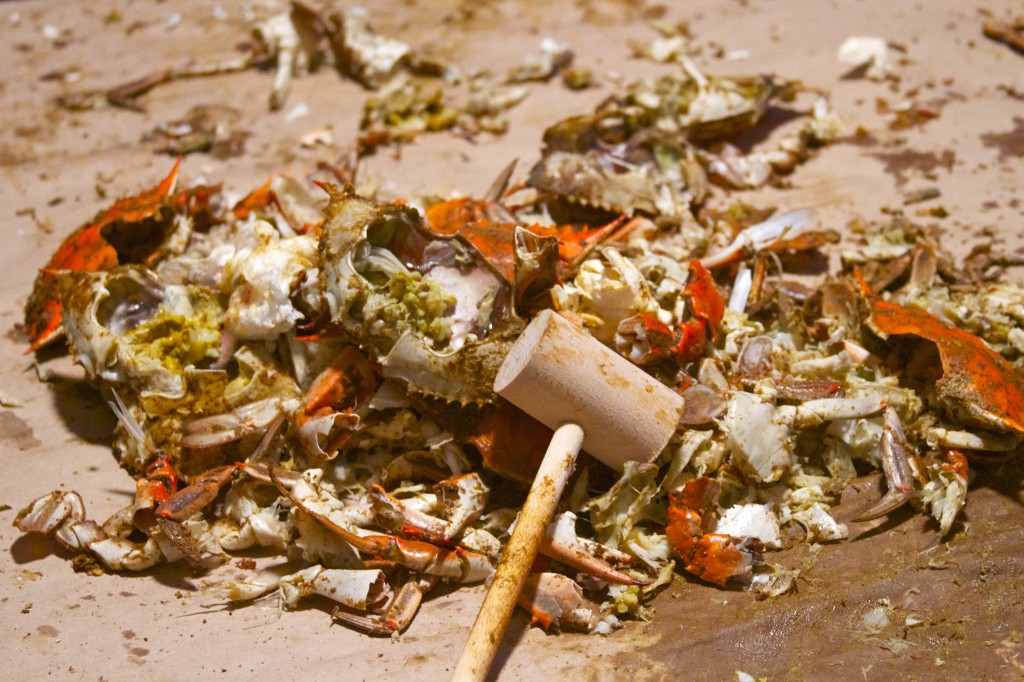 If you like seafood but have never tried steamed crabs then I hope this has piqued your curiosity. They’re tasty, fun, and 100% Paleo!

How do you like to eat crabs? Have you ever eaten steamed crabs?